Very often my customers have larger specimens than I do, even with plants that were introduced by me. Last week I visited Samantha Hatch, AKA "The Maple Lady" of Eastfork Nursery in Washington state. Her beautiful property sits along the east fork of the Lewis River, a river named in honor of Meriwether Lewis of the Lewis and Clark Expedition. As you can see we are dwarfed by her Acer palmatum 'Purple Ghost' which is larger than my original tree in the Display Garden, in fact hers is the largest that I have ever seen. I could have had a 'Purple Ghost' her size except that I always sell mine at some point. Another factor to explain her large maples is that she maintains a spacious landscape, uncrammed and uncluttered like mine, so the root-zone competition is not as fierce.

Sam loves her maples, her "babies" as she refers to them, and she was particularly dismayed when an Acer palmatum 'Japanese Princess' began to go off-color this summer. She investigated further and discovered that a squirrel had stripped off the bark from the trunk. The purpose of my visit – and I had been meaning to visit for years – was to bring her a sizeable replacement grafted on a short sturdy trunk. She set the tree next to her greenhouse area and we continued our tour. A squirrel then scampered across her lawn and I joked that it was heading for her new maple, and was maybe the critter that killed her previous tree. Sam assured me that she would protect her new 'Japanese Princess' with a wire cage, at least until it has grown larger. As I have mentioned before, a grafted propagule – especially when grafted onto vigorous green rootstock – can outgrow the original seedling, and that is the case, that the original 'Japanese Princess' is not the largest that I have.

Sam recently placed an order for both lining-out stock and older specimens. I love it when we sell liners at this time of year because it gives us many less that we have to pot up and take care of. We're short on space, while I noticed some empty areas in her greenhouses. She ordered a handful of 2-year seedlings from A.p. 'Mikawa yatsubusa' in 2.5" pots. We harvest seed from our huge specimen along the main road into the nursery and the big mama has always proven fecund. I guess about ¼ to ⅓ of the germinants show the 'Mikawa' tendencies with overlapping leaves and short internodes. After a full year in their pots we sort out the non-'Mikawa' types and they eventually become rootstock. The "nons" display good vigor so I doubt that we are dwarfing any of the cultivars that we graft onto them. We even find variegated "nons," and one beautiful seedling resembles our introduction of Acer palmatum 'Ikandi', so much so that we probably will just sell it as an unnamed seedling in our Rising Stars Series. The seedlings that do resemble 'Mikawa' are inexpensive, and as I mentioned before I don't have time or room to grow them all on for observation. I think many of them end up in the hands of bonsai aficionados because they will not display the graft union of a true 'Mikawa'.

Speaking of A.p. 'Ikandi', The Maple Lady bought some of them too. I chose a goofy name, I admit, a name that I would likely make fun of if someone else chose it. For example when A.p. 'Orangeola' was first introduced to the trade I scoffed at the stupid name, in fact I listed it as just 'Orange'. But then we began to sell quite a few so I jumped on board with 'Orangeola'. I like maple names like 'Bloodgood', 'Fireglow' and 'Orange Dream', but 'Orangeola' sounds more appropriate for a rose or some cheery perennial, or for a sugary soda pop. Furthermore I can discern no difference between the earlier cultivar 'Brocade' and 'Orangeola'. They looked identical this spring and also now in August in our 106 degree heat; in other words 'Orangeola' should have never been named and introduced. I don't want to sound like I'm riding a high horse here because I sell scads of the easy-to-produce 'Orangeola' and I don't even propagate 'Brocade' anymore because no one will buy it.


Back to 'Ikandi', it was a seedling from A.p. 'Alpenweiss', the latter being a seedling from A.p. 'Higasa yama'. Did you follow that? The old cultivar 'Higasa yama' produced a seedling – 'Alpenweiss', selected and named by Baltzer Rare Plant Nursery in Oregon – that was more colorful in spring than its parent. Then I did the same thing, with 'Ikandi' coming from the 'Alpenweiss' parent, as I think 'Ikandi' is superior, or at least noticeably different. I have a large 'Alpenweiss' specimen in an open garden setting that produces thousands of seedlings every spring. We spray them out as weeds when they're tiny before I can evaluate any of them. But what else can I do? – I can't dig them all up to grow on – but annually I wonder if I'm murdering something even more wonderful than 'Ikandi'. It would be fantastic to live in a parallel universe where our gardens are watered only, and all the herbage had to vie for itself, to thrive, limp or die. I suppose blackberries and ivy would eventually conquer all, but imagine the thousands of seedling maples trying to gain purchase at the expense of their nearby rivals. A jungle of Acers, all offspring from named cultivars – what an orgy! 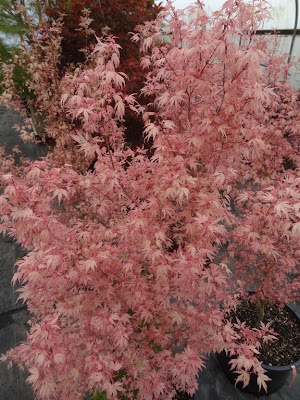 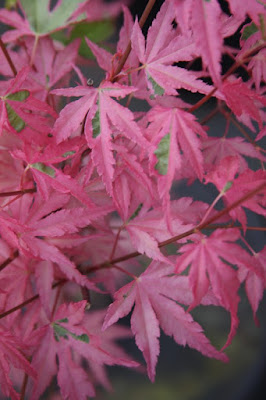 Sam will pay the big bucks to get ten A.p. 'Taylor', a Dick van der Maat from Boskoop, Holland introduction. Nothing is more pretty than a 'Taylor' when it is happy, and nothing is more ugly when it is not. We are licensed to grow it in America, but at its worst it is slow-growing and prone to mildew. It is possible to keep 'Taylor' pristine at the nursery with fungicides but I wonder how many gardeners will succeed with it in their landscapes. I saw a container yard full of them in Holland one October, and indeed it was a sight to behold. In America I think it is best suited as a container plant where it can receive shade in hot times and protection when it's cold.

Also on order is Acer palmatum 'Phoenix', another exciting cultivar from Dick van der Maat. 'Phoenix' is more of a garden "doer" than 'Taylor', at least that's my experience in Oregon. To quote van der Maat,* "The small-to-medium size sized palmatum-type leaves emerge a bright pink-red with yellow veins, the yellow slowly expanding towards the red margins to give a long spring-early summer color display....The leaf stalks are red and the young shoots become dark red. 'Phoenix' forms a compact broad shrub, estimated to grow up to 16' (5m) tall and 8' (2.5m) wide." 'Phoenix' tends to leaf out earlier than most palmatums, and visitors in mid April hurry past other cultivars to see what is so dazzling. 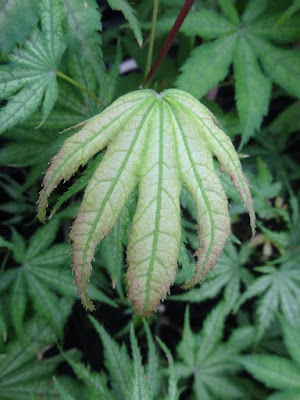 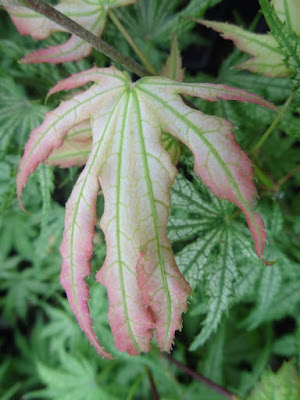 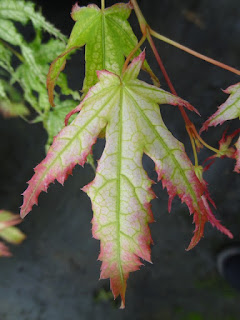 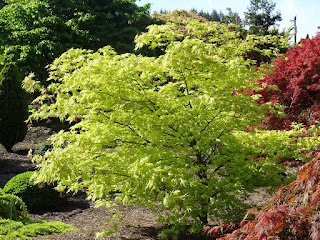 She also bought the last of our A.p. 'Ghost Dancer' liners. About 20 years ago nurseryman Dave Jarrell of Oregon discovered a beautiful seedling with a variegation pattern much like our A.p. 'Sister Ghost'. Mr. Jarrell wasn't aware at the time that I had introduced my Ghost Series – 'Purple Ghost', 'Amber Ghost', 'Grandma Ghost', 'Sister Ghost', 'Baby Ghost', 'Uncle Ghost' and 'Martha's Ghost'. Did I forget one? Anyway, Jarrell named his seedling 'Ghost Dancer', and I wasn't aware of its existence until about 10 years ago. What's funny is that we knew each other, and in fact I had bought palmatum seedlings from his mother years ago at the beginning of my career. Wouldn't it be fun to visit all of the nurseries in Oregon, to see what treasures are hiding in greenhouse corners? One such nursery is Crispin's Nursery of Molalla, Oregon – a small operation, but with some outstanding introductions* – and Crispin handed me a new maple that he discovered a few years before. He named it Acer palmatum 'Phantom Flame' because, even though it was a 'Sister Ghost'-type, it featured reddish new growth. But as you can see from the 'Ghost Dancer' photo above, it does too. 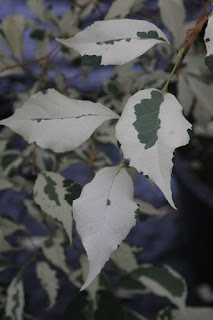 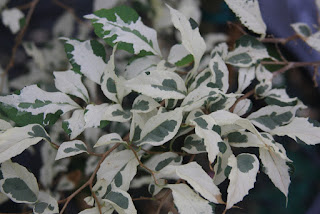 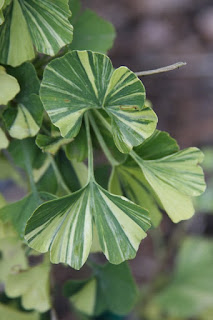 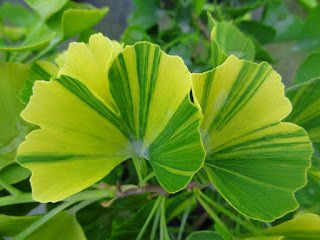 Sam bought an Acer palmatum 'Yuki yama' in a 6" pumice stone. I listed only one for sale, and at a high price, but she snapped it up in the first minute that we released our availability. 'Yuki yama' – Japanese for "snow mountain" – is the variegated form of 'Mikawa yatsubusa', and so far none of our plants have reverted. Apparently it originated as a sport branch on a 'Mikawa' but I don't know who first discovered, then propagated it. According to a 2015 UBC forum, "During a recent visit to Oregon, it was explained that the original tree was purchased from Larry Stanley of Stanley and Sons Nursery [of Oregon]. The variegated 'Mikawa yatsubusa' seedling was originally dubbed 'Elmer', since the sales transaction took place at a pancake restaurant chain in Oregon, Elmer's Pancake House. The purchaser then changed the name to 'Snow Kitten'." I think this "purchaser" was Fred Hooks of Georgia, and he gifted me a start a few years ago. I was happy to have the tree, but I – along with everyone else – groaned at the name 'Snow Kitten'. At some point someone, and I don't know who, changed the name to 'Yuki yama' and all growers exhaled a sigh of relief. If the original name of 'Elmer' would have stuck I would have quit horticulture altogether. 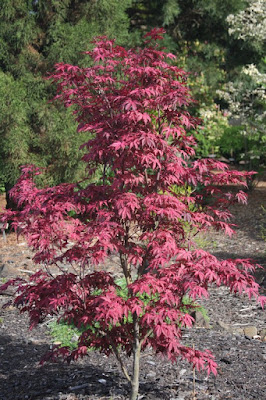 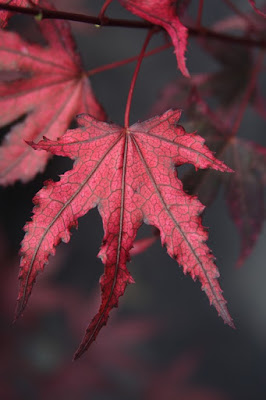 
Our best crop – large and bushy – of Acer palmatum 'Amagi shigure' in 3-gallon pots was included in our recent Specimen Availability, and Sam ordered 20 of them. I remember my first encounter with it at Tsukasa Maples in Japan. I saw it from a distance in the spring sunshine, and at first I thought I was looking at an A.p. 'Purple Ghost', but 'Purple Ghost' was too new at the time to have made it to Japan. The label was in Japanese characters – 天城時雨 – and thankfully my Japanese wife could translate for me.* According to Masayoshi Yano in Book for Maples the cultivar was introduced in 1987. Most growers find 'Amagi shigure' to be a weaker grower than 'Purple Ghost', but for the first month or two I find the former to be more bright and spectacular than my introduction.

*Not easily though. "Amagi" is a Japanese place name in Shizuoka and "shigure" is an "autumn shower." In the famous novel Izu no odoriko (Dancer of Izu, 1927) by Yasunari Kawabata a young man meets a pretty dancer for the first time in the Amagi tunnel during a rainstorm. I don't know why that delicious scene – which many Japanese people know – inspired the naming of the maple.

Eastfork Nursery began buying plants from me in the previous century – in the late 1990's she reckons. Her company is a combination of mail order, some on-site retail sales and plant-show sales. At the Hardy Plant Society event this past April, Sam's display outshone all other vendors, and most other maple sellers have quit the show because they can't compete with her product, knowledge and enthusiasm. The "Maple Lady" is one of my very most favorite customers: she is happy with my plants and always pays on time. Win-win. 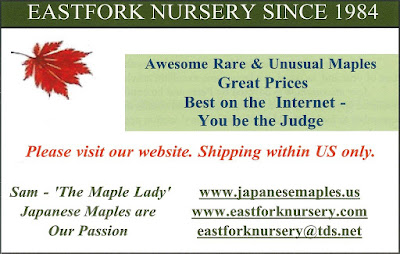 Note the Eastfork advertisement in the Maple Society Newsletter, where "Japanese Maples are Our Passion." I don't know who she means by "Our," unless it is herself and her happy customers. I asked Sam's husband, Dave, if he was into the maples also. He said "not at all," although he does help out, but that he was interested in "other things." Earlier he had driven up in a shiny red Corvette; I pointed to the car and said, "you mean things like that?" 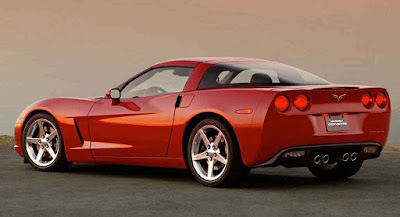 Acer palmatum 'Phoenix' or a shiny red Corvette? No offense to Dave, but I think I'd choose the maple.
Posted by Talon Buchholz at 2:16 PM