Last week's Flora Wonder Blog featured the Rosaceae family, a huge group of trees and shrubs with diverse genera such as Photinia, roses, apples, pears etc. The blog could have been three times as long with dozens more plants, but I fear that I already indulge your patience. Consider, then, the Garryaceae family with only two members: Garrya and Acuba. If you look up Acuba on our website you won't find it – you have to spell it right – Aucuba.* I only have one photo that I took inside a greenhouse in North Carolina. I felt immediate revulsion when the door was opened because I hate the genus, especially the variegated versions of A. japonica. I learned only recently that Aucuba was in the Garryaceae family; in fact I didn't realize before that Garrya was in its own family, and I would have guessed both genera to be laurels in the Lauraceae family.

*Aucuba used to be included in the Cornaceae family. 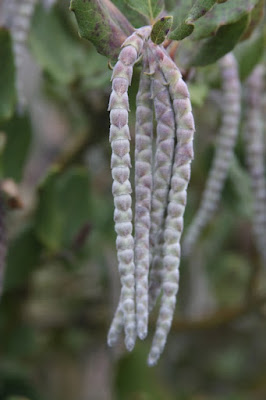 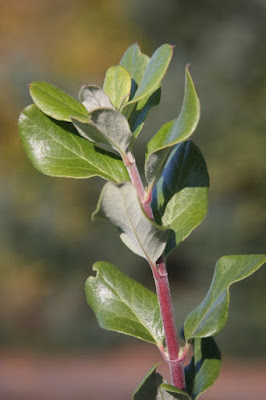 Plant (and animal) "families" are merely cubbyholes for botanists, and I suppose the groupings help them to understand how the members are related, which is usually a sexual matter. Aucuba japonica's flowers appear in clusters of 10 to 30 in a loose cyme.* The fruit is a red drupe (plum-like) and I know that I wouldn't eat one as birds also avoid them. Garrya contains a number of species native to coastal ranges of southern Oregon, California and Mexico, but we only grow the elliptica species. Its flowers are pendant catkins which bloom in late winter-early spring, and with the male cultivar 'James Roof' they can grow ornamentally to 12" in length. Tiny dark seeds are produced with a hard coating, but are fleshy in the interior. So I suppose that these Garrya fruits, though much smaller, are similar to the Aucuba drupes, and therefore both genera can reside in the Garryaceae family. To the casual observer, however, the two plants appear as different as cheese from chalk.

*A cyme is a flower cluster with a central stem. A single terminal flower develops first, and the other flowers in the cluster develop as terminal buds on lateral stems. From Greek kyma for "something swollen."

Garrya was named in honor of Nicholas Garry who was secretary of the Hudsons Bay Company, a strong supporter of David Douglas's botanical explorations. Elliptica is derived from Greek and means "about twice as long as broad" and refers to the shape of the leaves. Aucuba is from Japanese aokoba which breaks down to ao (green), ki or ko (tree) and ba (leaf),* and you already know what japonica means. Carl Peter Thunberg, the Swedish naturalist and follower of Carl Linnaeus, was the first to describe the genus. Partly my revulsion to Aucuba is that my Grandfather and I used to regularly walk through the woods of Portland's Forest Park. We could see that Aucuba, popular for the dry (or wet) shade of nearby homes would escape into the wild. The sight was about as welcome as a turd in the punchbowl, as Aucuba is revoltingly anathema to a Pacific Northwest wood.

*Before presenting that translation here I first ran it past Haruko, my Japanese wife. She initially screwed up her face and doubted it entirely, but then after some research in Japanese she allowed that I could be correct. Ha! However, she said that no one today would use the Edo Period word, and that "Aoki" is the common name now.
Posted by Talon Buchholz at 12:33 PM