A Week To Forget 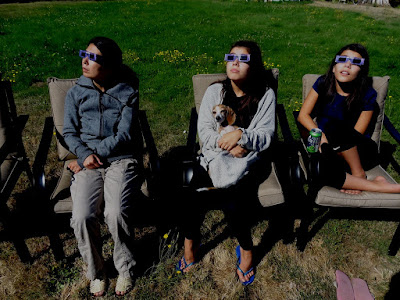 A number of groups visited the nursery last week, and I suppose some chose Oregon this August so they could also witness the solar eclipse. By coincidence our nursery association held its annual Far West Plant Show in Portland, an event that I have attended for over 40 years. Out-of-state nurserymen used to do business at the show, but these days the extravaganza has been eclipsed by the internet and one wonders how much longer it can limp along. I always enjoy the fiction a few weeks later when the executive director of the nursery association reports how wonderful and successful it was, and of course the attendance allegedly exceeds that from the year  before. I used to exhibit at the show but now I just attend and I guess the primary reason I go is out of a morbid curiosity, wondering just how shrunken and boring it can get. The Far West Show is free for association members like myself, but a whopping $20 for non-members which is at least $21 too much.

A month ago the German nursery firm Bruns Pflanzen announced that the owner and two members wished to visit on August 23rd, and we agreed to host them in the morning. I was excited because I had visited their nursery 17 years before, and it is one of the better-known in Europe. I remember asking Herr Bruns if we could perhaps see the original Picea omorika 'Pendula Bruns' which is common in the trade, in America at least. He – about my age – gave me a blank look and said he didn't know anything about it. I imagine that it was discovered or at least grown by his father then, but how surprising that the son knew nothing of it.


I explained to my wife Haruko that in Germany one always sits down with the host, either before or after the tour, for coffee and cookies or cakes. She loved the concept and wondered why American nurserymen were not as hospitable, that maybe we're in too much of a hurry. The day before she baked some treats and I assured her that we had plenty of coffee, and also tea in case one of them was a wimp. I tidied up the office some and put in extra chairs, determined that we could match any German nursery for hospitality. I cleared my schedule in the event that I could also take them out to lunch if they desired.

The morning of their visit I stayed close to the office. The day before any dead plants or garbage was hauled off so I could proudly show off my nursery.
...Hmm, as the morning progressed I kept looking at my watch, wondering when they would show up. I stayed until 5:30 in the afternoon, but never did they appear, and never did they call or email that they had changed their plans. That wasn't very German of them, was it? With their behavior they transformed themselves from real Germans into bleeping Joimans, and Seth and Eric humorously imitated Germanic speech. It was incredible – incredibly rude – that we were snubbed, especially since I am of German heritage, but at least I can laugh about it now, and I can assure you that the cookies did not go to waste.
Posted by Talon Buchholz at 3:08 PM