We're in the middle of our 5-needle pine grafting with Pinus parviflora cultivars being propagated in the greatest numbers (by far). Pinus strobus is our preferred rootstock and I buy them already potted, graded and ready to graft from Jason Hupp of Western Evergreen Nursery of Silverton, Oregon. His quality is good and his prices are fair, and even though I could probably grow my own for less money, I like the idea of supporting a young nurseryman who is raising a family and working full time for his grandparent's nursery while he gets his own enterprise off the ground. I too started a nursery with zero money and a mortgage and a full-time job with a couple of other nurseries, so I can relate to Jason's efforts. 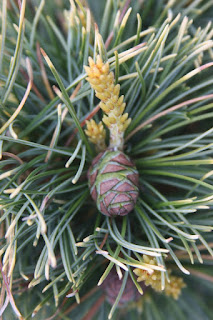 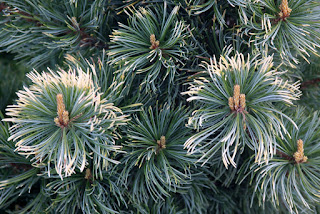 For years I kept separated and propagated three parviflora cultivars that always looked alike – 'Goldylocks', 'Dr. Landis' and 'Tenysu kazu'. I heard a couple of times that they were one and the same with 'Tenysu kazu' being the original name (from Japan). It was supposedly imported into North America by the late Dr. Henry Landis of Ontario, Canada, and was called (at times) 'Dr. Landis Gold' since the needle tips are cream-yellow in color. Upon Landis's death some of his plants were purchased by Verkade Nursery of New Jersey and they wrongly named the plant 'Tensu kasu'. Later someone else renamed the selection 'Goldylocks' – spelled deliberately wrong. The American Conifer Society states, “With that, the ACS will recognize the 'Tenyzu*-Kazu' – [thanks, but why the dash in the name?] – the original Japanese name, as the proper cultivar name with 'Goldylocks', 'Dr. Landis' and 'Dr. Landis Gold' relegated to AKA status, while 'Tensu kazu' and 'Goldilocks' are left as misspellings of other names.” But, of course, the previous sentence from the ACS should not capitalize the kazu part.

*Even the Conifer Society spells it Tenysu and Tenyzu in the same description.

You get the story again if you google Pinus parviflora 'Goldylocks' on the ACS website, where it is written that “This cultivar has a complex history and illustrates why taxonomists can be difficult to be around.” Then, a David Olszyk stridently comments, “It's becoming more well-known that 'Tenysu-kazu' is the correct cultivar name for this selection. The rules of nomenclature require that the original name be used for academic study with commercial names relegated to AKA status.” That's why, for example, that the misspelled Acer pensylvanicum stands, when the correct spelling of pennsylvanicum should have been used. So thank you, David O., for your nomenclatural expertise.


But wait a minute. What if the good Dr. Landis screwed up in the first place with the spelling of 'Tenysu kazu'? Tensu kazu or Tansu kazu seem to be legitimate Japanese names, but Tenysu does not. I'm certainly not a Japanese linguistics expert, but at this point in my life...with using Japanese plant names for 45 years, and then being married to a wife with two daughters who chirp constantly in Japanese, I can positively tell you that tenysu is not Japanese. Wife – Haruko – confirmed my suspicion and said definitely not. So there.


Remember – it was Haruko Buchholz who cleared up the nomenclature of another Japanese parviflora pine – 'Tanima no yuki' which was screwed up into 'Tani mano uki', and even today some prominent nurseries still have it wrong, and so even does the Royal Horticultural Society of England. While a number of individuals take credit for the correct spelling – as in they have “researched” into the matter – it was actually Haruko who first solved the mystery 17 years ago. We were walking through the Display Garden and I asked her the meaning of the Japanese name. I said, “They say that the name means snow on the mountain.” Wrong. She corrected the spelling to “snow in the valley” by rearranging the letters into “Tanima no yuki.” Furthermore – she blushed – “tanima (or valley) is slang that bad boys use to refer to a woman's cleavage.” I reminded her that I was a “bad boy” too.


Anyway, back to the Tenyzu or Tenysu kazu question, Haruko says kazu means “number” so I don't know why that would be in a plant name. She wonders if the correct name is 'Tenshu kaku', an architectural typology commonly known as a castle keep (donjon), which is usually the central tower located within a castle. Note the tower of the famous Osaka castle – maybe that looks a little bit like the variegated P. parviflora. That's a long-shot name and explanation, and one would have to consult an old Japanese conifer connoisseur I suppose, but I don't know of anyone. In the meantime we'll continue to label and sell our trees as 'Goldilocks' because I don't like the “y” in either Goldylocks or Tenysu. In fact the latter sounds like “tennis shoe.” For what it's worth the Hillier Manual of Trees and Shrubs goes with 'Tenysu-kazu'.


Another dwarf P. parviflora that's in production is 'Regenhold Broom'. It came to me named as such, but later I saw it at another nursery labeled as only 'Regenhold'. That sounded better, without the “Broom,” so I changed the labels. Then a couple of years ago I read that it is indeed proper to include the Broom with the name, as that was the intention of the Regenholds when they discovered the mutation on a specimen of Pinus parviflora 'Glauca'. In any case it's a great little dwarf suitable for the rock garden or trough. My oldest plant has spent its entire life in a container, and it is so slow and compact that at 15 years old it is only about 18” tall by 30” wide. Similar to 'Regenhold Broom' is 'Kinpo'*, and we absolutely keep the two separated in the containers (with differently colored labels).

*Haruko doesn't have a clue what “kinpo” means, and wonders if it is Korean. 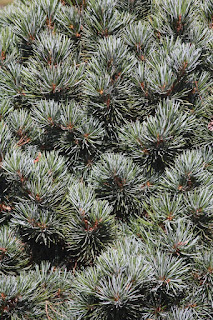 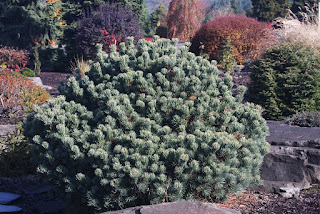 
Pinus parviflora 'Aoi' – pronounced like a little kid describing his hurt finger – came to me many years ago from Susan Martin, formerly of the National Arboretum. She has since moved on and I have lost track of her, but I remember her as one of the few “normal” people in charge of an arboretum department (conifers). In fact she arranged for my daughter to do an internship there one summer. Anyway 'Aoi' is another slow-growing cultivar, and my oldest specimen is the photo above, growing more wide than tall. In other cases, though, it can grow more narrow and irregular. Aoi means “blue” in Japanese, which can be confusing because Ao means “green.” 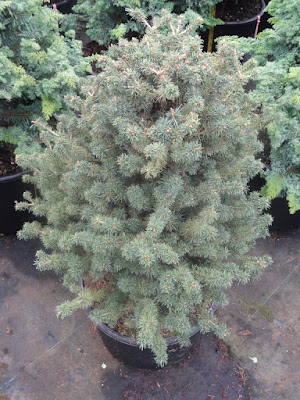 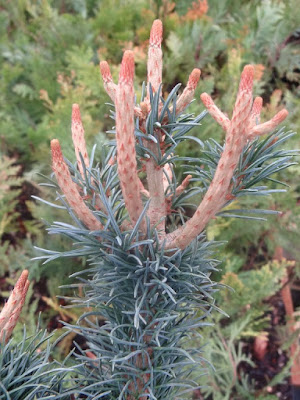 
Pinus parviflora 'Bonny' is a cute miniature, but it should not be confused with the faster-growing 'Bonnie Bergman'. 'Bonny' features short gray-blue needles that curve around the stems, and the tree only grows a couple of inches per year. I don't know who the Bonny is who is honored with the name but the British word means “attractive, fine” or “excellent,” and is perhaps derived from Anglo-French bon for “good,” and that from Latin bonus meaning “good.” My Bonnie Lies Over the Ocean. 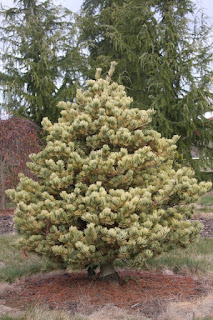 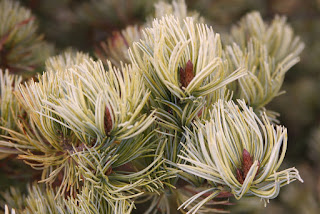 
I initially dismissed P. p. 'Ogon' as scions were sent to me and I never saw an older specimen. The problem was that 'Ogon' – which means “gold” – was just not gold enough. In smaller sizes it looked sickly, especially in spring and summer. Now I have 15-year-old specimens in the ground and this winter they are glowing splendidly. Also it can withstand full sun if adequately watered in summer, and remember we can reach 106 degrees F with very little humidity. There are a number of “Ogon” cultivar names in horticulture, like Cephalotaxus harringtonia 'Ogon' ('Korean Gold'), Metasequoia glyptostroboides 'Ogon' ('Gold Rush'), Bletilla striata 'Ogon', Pinus thunbergii 'Ogon' and others, so please no more!


At first I was going to title this blog A Passion for Parvifloras but I think “passion” is too strong a word. It takes more than a pine for me to be passionate. Besides there are a lot of parviflora or parvifolia in botany, the word coming from Latin parvus for “small” and flos for “flower.” I've never measured the flowers of P. parviflora to see if indeed they are smaller than other pine flowers, and what would we measure anyway: the male or the female flower? Two Germans, Siebold and Zuccarini, are responsible for the specific epithet, and they're both kind of boring with plant names judging by others they have coined. P. parviflora is native to Korea as well as Japan, and in Korea it is known as the Ulleungdo pine, named for a beautiful island east of the Korean Peninsula. In America we know it as “Japanese White Pine,” and in Japan it is goyomatsu or “five-needle pine.”

The pine tree of shiogoshi
Trickles all night long
Shiny drops of moonlight
Posted by Talon Buchholz at 12:45 PM 0 comments