To those of you still under the throes of winter, I commiserate; and perhaps you shouldn't bother to read this blog, for I plan to brag about our lush spring growth. We've had a number of sunny days, and many plants are rewarding us with fresh rejuvenation, especially in the greenhouses. It's quite fun to wander around, as I did last Sunday, and marvel at another spring; except for the bittersweet realization that I have a limited number of them left. 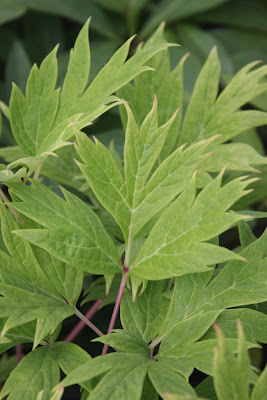 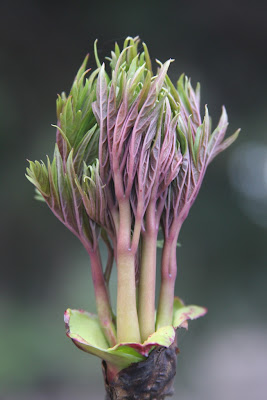 In any case, come along with me as I promise you some floral treats. Consider the Paeonia genus, for they are popping up around the garden. 'Black Panther' is a delightful tree peony with lacy purple (and later green) foliage. It flowers a luscious red with yellow stamens, all on a compact shrub. Paeonia lutea, the "Tibetan Peony," is a woody bush that produces deep yellow flowers. Paeonia lutea var. ludlowii is a Chinese species that grows larger than lutea, with equally yellow flowers and larger leaves. These will bloom later in spring, and it is only the foliage that is emerging now. 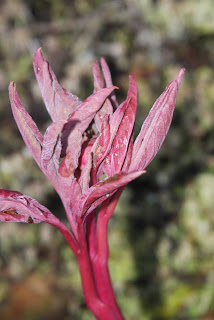 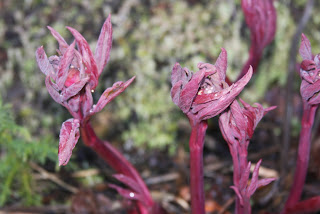 Paeonia mlokosewitschii just took me five minutes to spell out, and I've never been able to say it either. It is commonly known as "Molly-the-Witch," which provides some relief. This low-growing herbaceous species is the "Caucasian Peony," although black people are able to grow it too. The nubbins at present are a delicious purple color, but they will evolve to green with hairy undersides, similar to my office staff – not green, but hairy. The seed capsules are colorful when open, with black seeds showing off against the red inner pod. Molly blooms in early June for us in Oregon, with good-sized light yellow flowers. It is named for its discoverer (in 1897), Mlokosiewicz, a Polish forester. The name Peony is from Paeon, who was saved by Zeus from the wrath of another god, by turning Paeon into a Peony flower. You are invited to refer back to the 6/8/12 blog Bombastic Blooms  of last spring's visit to a peony farm, but as usual, finish the blog first.


We have nice foliage emerging in our GH20, the warm greenhouse. Disanthus cercidifolius 'Ena nishiki' has tiny leaves, not yet full size, but you can already see clean white and green variegation. Begonia 'Escargot' is always fun to see, and who cares if the bold spiraling leaves cover the insignificant white flowers? 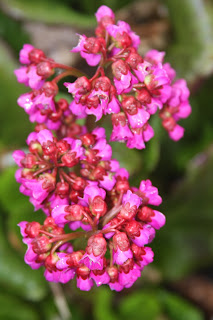 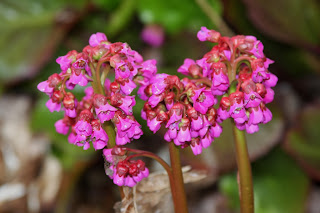 
Bergenia 'Lunar Glow' features purplish-green leaves in summer, with cream-white leaf orbs spotted throughout the plant. Ours are currently in bloom, a nice strong pink, and are very abundant. As with most Bergenias, the fall-winter foliage is evergreen in Oregon, or rather a dark purple, and glossy. The genus comes from Asia, and I have seen it in the wild. I don't know if 'Lunar Glow' is a straight species or a hybrid, but there are many other new cultivars recently, such as 'Pink Dragonfly' and cordifolia 'Winterglut'. Bergenia is in the saxifragaceae family, and the common name of "Elephant Ears" is due to the shape of the leaves. Another common name is "Pigsqueak," which is the sound you get when rubbing two leaves together. Scientifically the Bergenia name honors Karl August von Bergen (in 1794), a German botanist and physician. My Grandmother had a few Bergenias in her garden, and I think most Grandmas do also, so it is an old-fashioned plant; but new selections are offered these days, and young gardeners can also fall in love with the "Elephant Ears."

The Corylopsis are finishing their early blooms, and the beginning of leaf development is occurring. The glaucophylla species is of uncertain origin, and perhaps it is a variety of another species. My original plant came from the old Heronswood Nursery in Washington state, and D.H. and his cohorts always impressed me with their accurate nomenclature. But anyway, what a handsome leaf, eh? 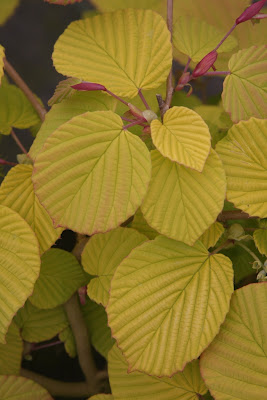 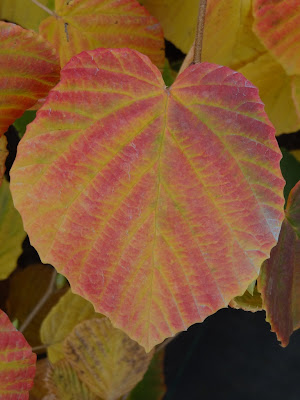 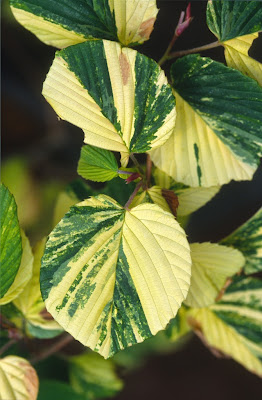 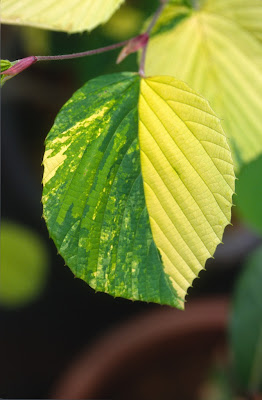 I suppose my favorite Corylopsis leaf is spicata 'Golden Spring', and every year I can't resist to take new photos, even though I already have plenty. I saw a variegated form in Japan ten years ago, but I don't have it, and I'm not sure if it ever made it to America. Maybe it has a reverting habit, but it sure looked nice there in full sun.

Hostas are breaking through the earth's crust, and a collection of them reminds me of a bountiful salad. And why not? – in Japan new leaves are sold in grocery stores; better that people eat them before the slugs do. We have a dozen or more cultivars, without really trying to accumulate them, but I only have photographs for 'Cracker Crumbs', 'Dragon Tails' and 'Medusa'. When I searched my website for Hosta, interestingly, the first on the list was 'Hosta La Vista', a cultivar of Abies concolor!? The genus name honors the botanist Nicholas Tomas Host, an Austrian botanist. In England, Hostas are commonly called "Plantain Lilies," and "Giboshi" in Japan. 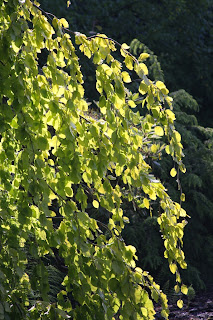 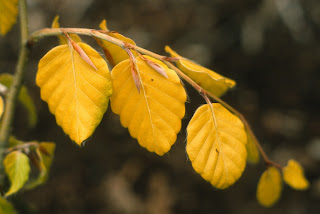 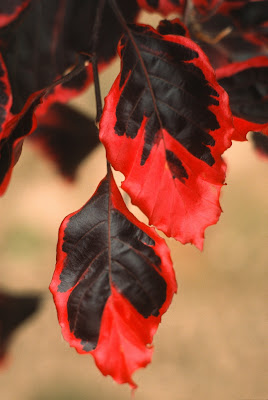 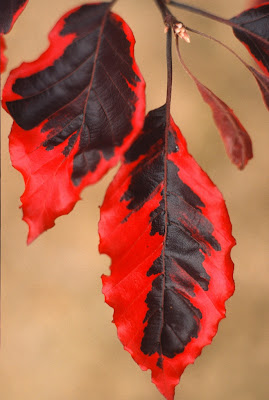 Speaking of edible leaves, how about the new foliage of Fagus sylvatica for the salad? You must eat the leaves when they're fairly new, otherwise they can be tough to swallow. To me, they don't really have a taste; it is just eye appeal, and I got the idea from a German who claims to eat them also. 'Aurea Pendula', 'Bicolor Sartini', 'Marmo Star', 'Red Obelisk' and 'Tricolor' would be visually appetizing in the salad bowl. 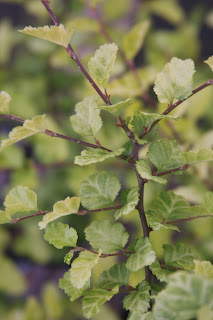 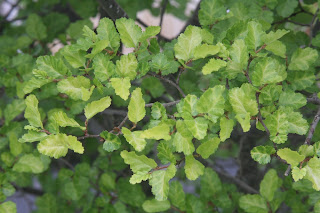 I don't know about eating the Nothofagus genus, however. The name comes from Latin nothus, meaning false, and fagus for beech, and they're commonly called the "Southern Beeches" or "Antarctic Beeches." But they are not true beeches at all; they are in their own family, Nothofagaceae. They come from Chile and Argentina, and some species are native to Australia and some surrounding islands. We root the cultivar 'Chillan', which displays a cream-yellow variegation, especially lush in spring. Then I spend the rest of the summer trying to convince the crew to not overwater them. 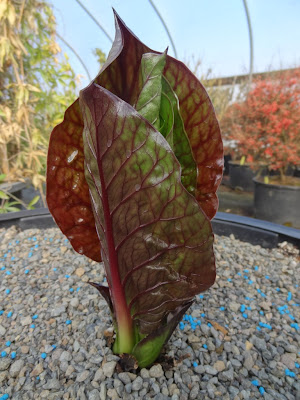 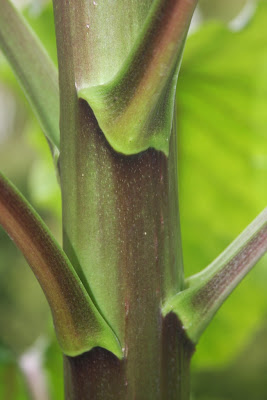 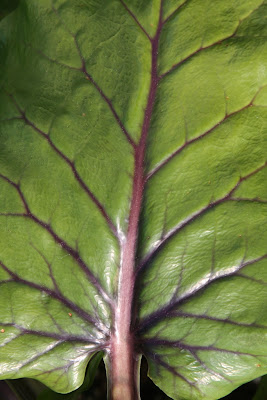 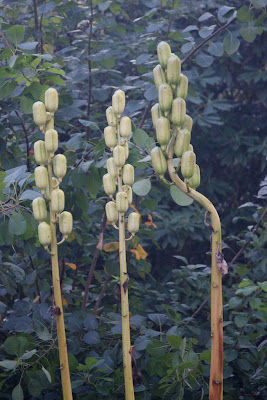 Cardiocrinum giganteum is sending up leaves, and even if it never bloomed, it would still be worth growing the "Giant Himalayan Lily." The genus name is from Greek kardia, meaning "heart," and krinon meaning "white lily;" and of course the species name is from Latin for "giant-like." The white scented flowers won't appear until May; first the plant needs to shoot up to ten-to-fifteen feet tall. I'm looking forward to visiting Far Reaches Farm later this spring to see their strain of pink-flowering Cardios. The seed pods are very attractive in the autumn landscape, and as you can see, our Watermelon Man is fond of them as well.


Pulsatilla vulgaris is in leaf as well as in bloom in our gardens. The "Common Pasque Flower" comes in cultivar flower-shades of white ('Alba') and red ('Rubra') and the cute bells sit atop the fuzzy gray-green foliage. This herbaceous perennial is in the Ranunculaceae family, and happily grows in Europe in sunny spots with good drainage. Pulsatilla vulgaris is also named "Dane's Blood" or "Roman's Blood," and I'll repeat the legend that they sprang up in places enriched by the blood of Danes or Romans. The seed heads are hairy, Dr. Seuss-looking creatures, reminiscent of Clematis. Don't try to eat the Pulsatilla leaves, for they are so bitter and burning that you can't ingest enough to kill yourself, but I've never had a bad reaction from planting one. I had a good reaction, though, when I walked past a clump of 'Alba' this morning. 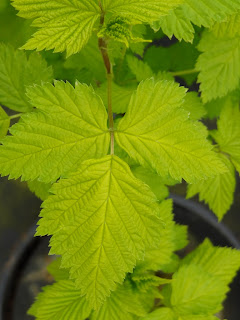 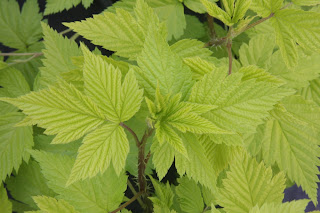 
Ribes spectabilis 'Golden Ruby'...wo, wo, whoa – I mean Rubus spectabilis 'Golden Ruby' – my mind was befangled because cultivars of "Current," the Ribes genus, are in flower now – but today the Rubus is displaying its golden leaves. The species is an Oregon weed that grows along stream sides, and in summer produces yellow raspberry-like fruits which are edible, although rather insipid. I eat them anyway when hiking, because after all they are free. 'Golden Ruby' is known for its soft-yellow foliage, and the "ruby" part of the name is due to the flower color, and together they are a nice combination. A close relative is Rubus parviflorus, the red "Thimble Berry," which I also eat along the trail, but unfortunately it too delivers an insipid taste.

Everybody is thrilled to see our GH20 display box with an enormous Podophyllum 'Kaleidoscope'. This Asian "Mayapple" produces large variegated leaves in the shape of old "tractor seats." While this plant is mostly evergreen, we prune out the older leaf stalks and stems in March...to give ample room for the fresh new leaves. Not to be missed before the "apples" – the seed pods – form, are the dark burgundy-red flowers. And, please God, smite any nurseryman who spells burgundy inkorrectly as burgandy! 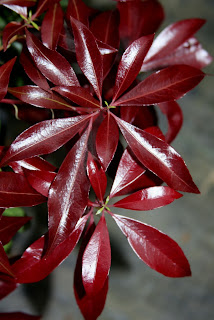 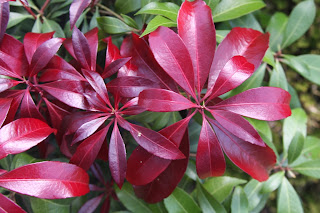 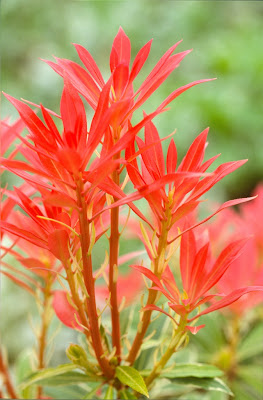 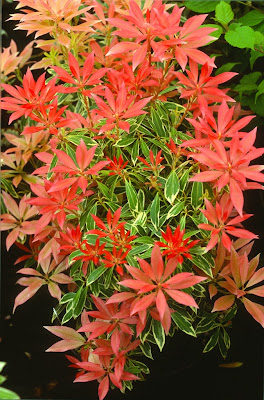 The "Andromedas" are a wonderful genus, known botanically as Pieris, and are justly famous for their early spring flower cascades. This ericaceous genus combines well with Rhododendrons, as both prefer similar climates and growing conditions. But my new favorite is Pieris japonica 'Katsura'; not because of the flowers, but rather for the deep-purple new leaves. They are quite difficult to photograph because they are so glossy, so illuminative. I don't remember a thing about their flowers, as I am consistently overtaken by their new leaves. The same is true of Pieris japonica 'Flaming Silver', a cultivar with boring variegated foliage, but which bursts forth with dramatic red new growth.

I'll finish this blog with a few highlights from last week's visit to the Rhododendron Species Botanical Garden in Washington state. If you still have energy, you can refer to last year's blog:
The Rhododendron Species Garden. I'll show you some photos from my recent memorable day, without any text, and let them speak for themselves; for while I loved the foliage, I don't really know much about the plants. 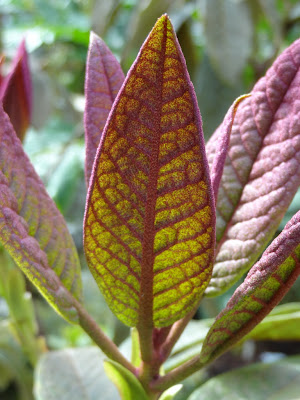 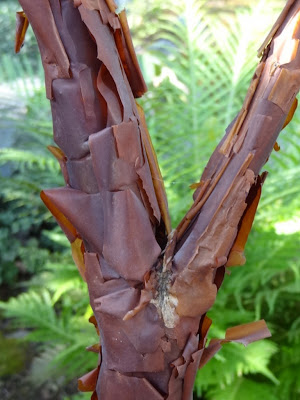 
Impressive was Agapetes oblonga and Gaultheria pseudonotabilis, though neither of them are hardy, I suppose, since they were both housed in the Foundation's fancy new conservatory. Also inside were Rhododendrons boothii, megacalyx, moulmainense 'Stenaulum', and my favorite "tender," Rhododendron nuttallii (or sinonuttallii), mostly because of the fantastic bark.

So, we've had a wonderful journey, don't you think...to wander with me in my nursery, as well as in other gardens? True, I don't sell all of these plants, and I don't grow all of these plants; but, more importantly: I have seen all of these plants this past week. Did the banker notice anything in his week except for numbers, the baker anything but his bread, or the candlestick maker...? Thanks to my hard-working loyal employees and customers, I can indulge a Sunday with the joys of Flora Wonder.

Posted by Talon Buchholz at 10:19 AM 0 comments