“It's all relative,” my Uncle Einstein used to theorize. At the nursery we're relatively relieved that the temperature has only been in the upper 90's compared to 106 F the week before. Not so far away from my Oregon nursery is Death Valley, California where the average temperature in July was 107.4 F, a record for the hottest month at a single location in U.S. history. Of course Death Valley holds the record for the hottest temperature ever recorded in the world, and that event occurred on July 10th, 1913. How hot? You guess first; the answer comes at the end of the blog. 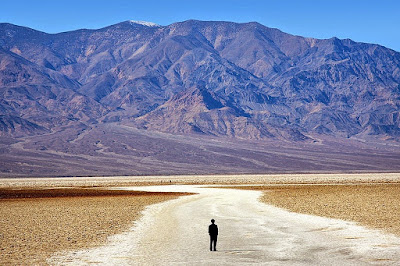 Highs at Death Valley in the 100's are common from mid-June through early September. But in the summer of 1996 it sizzled over 120 degrees for 40 days, and in 2001 the Valley endured 154 consecutive days (5 months!) of triple digit heat. Keep in mind that these are air temperatures, because at Furnace Creek on July 15, 1972 the ground temperature measured 201 F, just 11 degrees short of the boiling point for water. That location is 190' below sea-level, and since air warms as it moves down an intense oven is created. 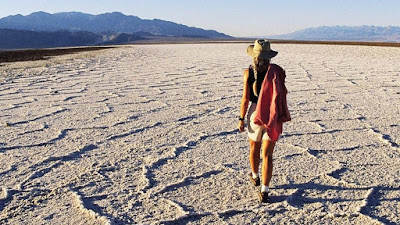 Death Valley swarms with pasty German tourists who are inspired by American TV nature programs, and it's not uncommon to see Vater frying eggs on the hood of the vacation rental van while Mutter videos the episode. Tochter (daughter) Hilda scorched her thin-shorts ass as she leaned against the vehicle while texting her boyfriend. He doesn't respond because 1) nothing works in the heat, or 2) he already has a new girlfriend, but in any case she regrets coming on the stupid American vacation. The boring German guidebook admonishes them to drink plenty of water; but OMG one tires of it because it's sooo tasteless and...it's just wet.

I find it interesting that Death Valley and (relatively nearby Bodie State Park, California – only 259 miles (417 km) apart – occupy the most-hot and the most-cold sites in America for the greatest number of days in the year. I don't know how many days because I haven't tabulated them, but I'm certain that I am correct, and I wonder if the California meteorologists are aware of the fact. 116 F in Death Valley for the high, 29 F in Bodie for the record low – this is not at all uncommon. Both locations are in the eastern part of the state with the hell of Nevada only a short distance away. Bodie is now a ghost town, at 8379' in elevation, and it is administered by the Bodie Foundation which spouts the tagline: Protecting Bodie's Future by Preserving Its Past. Bodie was originally established in 1859 with the discovery of gold, and was named after prospector W.S. Bodey. Bodey never got to see the rise of the town named after him as he perished in a blizzard while making a supply trip the following November. Death Valley received its name in 1849 during the California Gold Rush when 13 prospectors perished with heat on one early expedition of wagon trains. So, highest temperature or the lowest, which way do you prefer to perish? 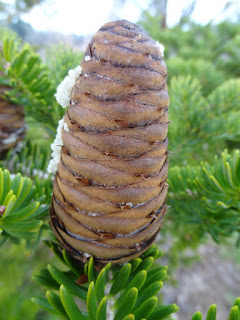 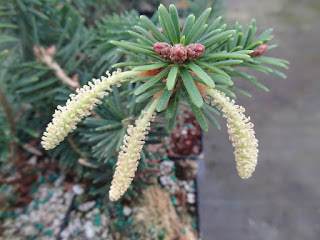 A national pizza chain advertises: Happiness at 425, meaning that you set your oven at 425 degrees, then slide your pre-made pie in for about 25 minutes, then the whole family will be grinning from ear to ear. No one has time for salad as they sate themselves on cheese, chemical dough and pepperoni from steroid-fed cows, but I'll admit that I like a greasy slice now and then too. Anyway 425 is an average temperature to cook food while just 106 is scalding for plants, especially the kind that I grow. Which plants love the heat, and which do not? In general Abies do not. Very few species inhabit an area so warm. Perhaps A. grandis, which is native to the Pacific Northwest at low elevations. Perhaps Abies balsamea var. phanerolepis (Canaan fir) from West Virginia, although I don't know their climate and have never visited them hillbillies. Maybe Abies firma? How hot does it get in the lowlands of central and southern Japan? I don't know how hot it gets, but I know that it can be very humid, and that is why it succeeds as a rootstock for fir grafts in the American Southeast.


What has struggled the most in our humid-less heat are some of the dwarf Abies, those that originate from witch's brooms. Abies koreana 'Ice Breaker' can burn if it misses its drop of water, as the newly planted one did that's just outside the office. Actually, it didn't lack for water – the roots were plenty wet – but the H20 just couldn't make its way up to the top shoots. Other established Abies in the 'Ice Breaker' planting are lustfully thriving – in fact the dwarf witch's brooms are erecting the most prodigious of leaders that I'll have to prune so that these little conifers won't revert into full-sized trees. Also, be careful with the dwarf tiny-leaved green buns such as Abies koreana 'Cis' and 'Tundra'.

The Tsugas also complain when hot, regardless if you are talking about canadensis, heterophylla, diversifolia, carolina or mertensiana. It seems that the more dwarf that they are, and the more close to the ground that they grow determines whether or not the needles will burn. Remember what I just said about Death Valley, that the ground temperature can be 80 or 90 degrees hotter than what we experience in the air. 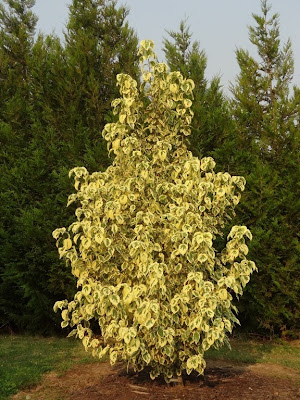 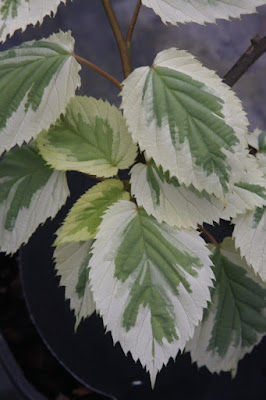 I can comment on two surprises that we've experienced in our little heat wave. One is that our large established Davidia involucrata 'Lady Sunshine' still looks remarkably well after 106 F in the full sun. Every year in the ground counts for something when dealing with the heat. Of course it receives regular watering. Unfortunately our 14' Wollemia nobilis in a cedar box now shows some foliage burn, even though it never missed a watering. It is too large to fit into any of our greenhouses and last winter we constructed a poly dome over it and installed a space heater. That worked perfectly and it looked great this spring. But now it sits in front of a white poly house in the blasting sun and I certainly was remiss to have not protected it better. Since it's along the main road into the nursery I'll have to move it – hide it – for now, and then we'll have to figure out where to put it for winter. The Wollemi's foliage somewhat resembles that of Cunninghamia lanceolata, and I've learned that with the latter species it can take a couple of years of fresh spring growth to cover the persistent burnt needles. The Wollemi is from Australia so I assumed that it could withstand our full sun, but upon further reflection it is native to deep canyons which are probably very humid, quite unlike the location where I placed it. 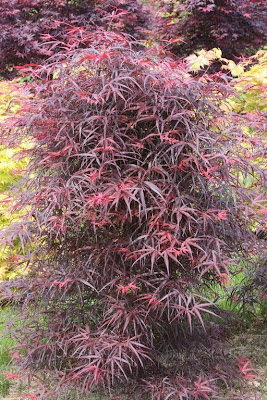 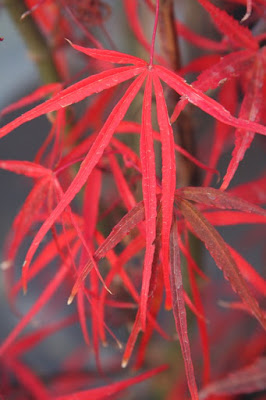 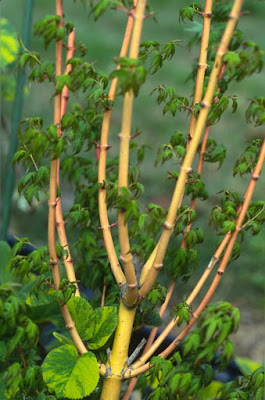 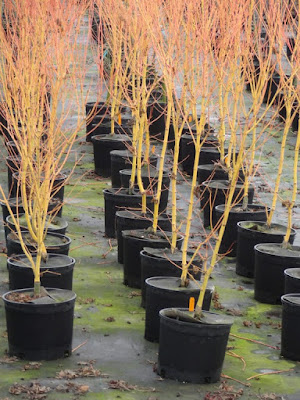 Plants that thrive in the heat are numerous, especially the broadleaved trees in the greenhouses. Maples, Ginkgo, Magnolias etc. will bolt if given sufficient water. Our irrigation pond is full of nutrients from our water drains that lead back to it, and certain maples like Acer palmatum 'Hubbs Red Willow' can achieve 5' shoots – water shoots I tend to call them. The difference between Buchholz Nursery and the competition is that I am a prophet of prune. Don't stake, prune rather. It builds trunk caliper and leads to a more-bushy top. A couple of years ago our trailer-dwelling meth-addicted neighbor expanded his enterprise by stealing more than our gas, tools, vehicles etc., but he and his cohorts took to stealing our plants as well. In his brain-fog he wouldn't know what plants to take, but he was apparently assisted by the neighboring nursery's nefarious employee – and we know who he was – into pilfering relatively new maples such as Acer palmatum 'Bihou'. It was in late winter and the 'Bihou' stems were lucratively glowing with orange-yellow color. I checked out a couple of nearby retail nurseries but could never locate my maples. But the point is: my maples have a signature and they are different – superior I would say – to those of any other company. Not just the pot, the media, the fertilizer – that's enough evidence right there! – but primarily by the way that they are pruned. I keep harping at the crew: “More, more, more.” The women employees are scared to death to prune, fearing that perhaps I will beat them senseless if they prune too much, but fortunately foreman Luis trusts me, and most importantly himself, to really whack at the Asian species.

It is nearly mid-August and we are well into our maple grafting. I used to cut all of the scions, but now in the evenings my 11-year-old daughter Saya sometimes helps cut while I hold the bag. There's no time to chat as she has learned to focus on the tree and must discover the appropriate wood and where to cut. At the same time she has to keep count, and she knows I don't want 99 or 101 when I say to do 100. So if you buy liners of Acer palmatum 'Kinshi' or 'Sister Ghost' next spring you'll know that Saya made it possible. I'd love to show you a recent photo of Miss S. – and she's gorgeous – but I've decided to never show my children on the blog again. For example the boys in her class are exceedingly interested in her and so they google her name. The round-heads went wild and teased her last year because she was wearing shorts, and she does have a nice set of honey sticks.

As we were preparing our maple rootstock we discovered that mice had nibbled on some trunks at the exact point where we would have grafted. Always something, always something that can go wrong. But maybe just as well because perhaps we are producing too many plants for our limited labor to care for, and also for our space limitations. I don't need to build another greenhouse at my age. The key to a successful nursery is to find balance: that you're not too far behind, but also not too far ahead. Actually I've never been “ahead” in my life – there is always more that could be done with the plants. We have a “B” nursery but we do turn a profit. You have to achieve a number of “A” results to outweigh the “D's” and “F's,” so it's an awful lot of hard work and worry (and luck) to be able to run a “B” nursery.