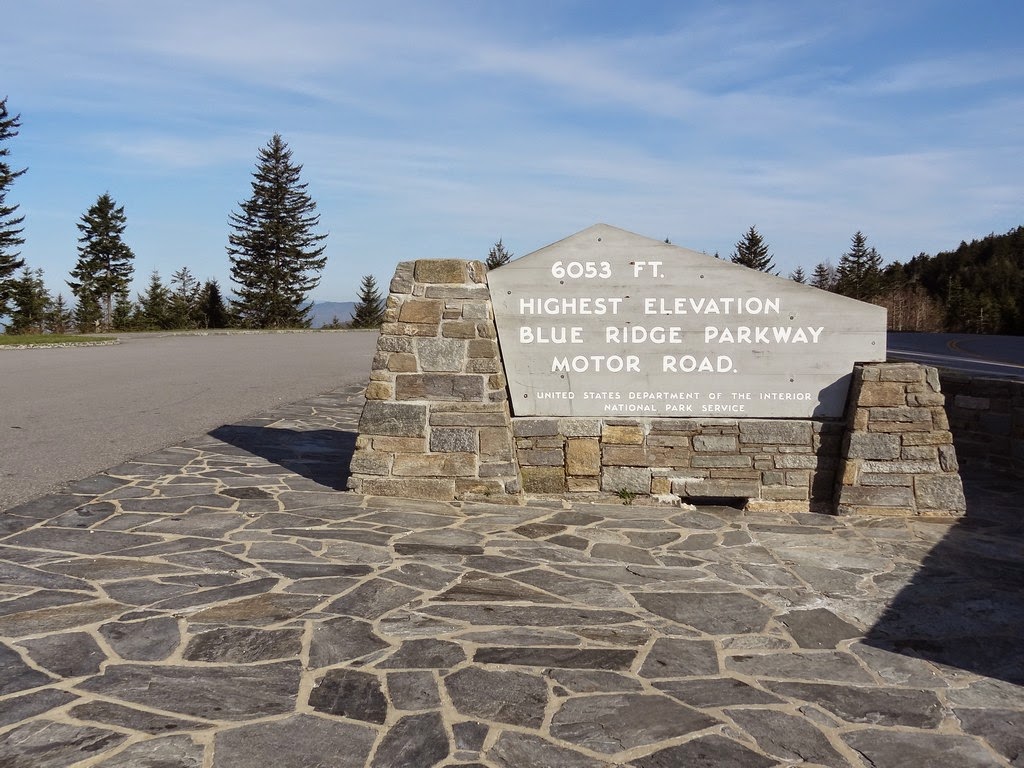 The Great Smoky Mountains National Park is not the same thing as the Blue Ridge Parkway. The Parkway is a National Parkway and All-American Road that runs for 469 scenic miles through the Appalachian Mountain Range, bisecting the states of North Carolina and Virginia. While The Smokies are connected with the Parkway by road, they are separate and distinct, built as two different projects and administered by two different National Park Service units. 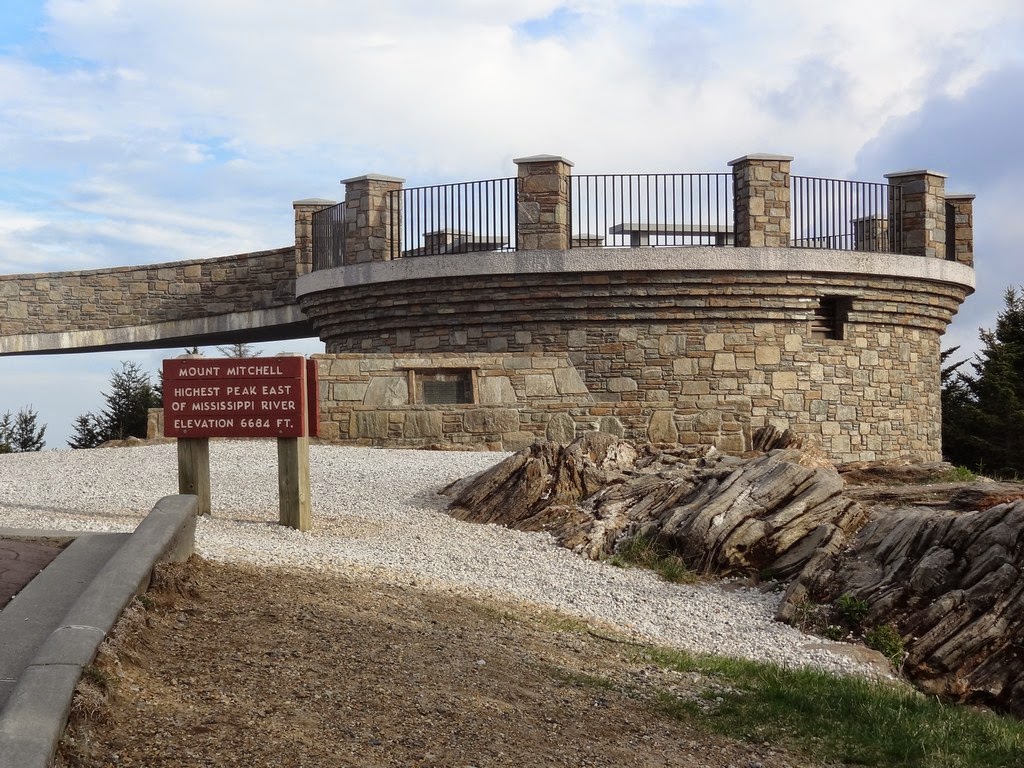 Whatever; they are more or less the same, and a vista from 5,000' on the Parkway looks pretty much the same as a 5000' vista in the Smokies. Now, this assessment comes from me, a newcomer to the area, and there is probably an expert who knows that a certain plant or salamander or hillbilly is endemic to one and not to the other. But for the purposes of this blog, perhaps I'll just say that I was in the Appalachians.

I've always been a geography buff. For example, do you know that Lhasa, Tibet is further south than Cairo, Egypt? Yep: true. Anyway I've been fascinated with the Appalachians, even though it took me most of my adult life to finally go and visit them. In 1528, while exploring inland in northern Florida, the Spaniard Alvar Nunez Cabeza de Vaca (whose last name means "cowhead") found a Native American village near present-day Tallahassee that sounded like Apalchen or Apalachen. Eventually it was altered to Apalachee, and came to refer to the entire mountain range. I finally encountered the Appalachians in the fall of 2013, and then again in the spring of 2014, and, as frequently happens, those experiences exceeded my expectations.

Of course my aim was to see the abundance of tree and flower species, for there are more in the Smokies than in all of Europe, more than anywhere else in the world per area except for a South American rainforest. Last fall was a wonderful experience, and Phil Turrell and I actually walked a mile on the famed Appalachian Trail before darkness and cold cut us short. We didn't come across any bears, but we did encounter a bear-like Thru-Hiker – as they are officially termed – and he had a month left to go on his six-month sojourn.

This spring I was with employee Seth, as I was determined to drag him away from his tiresome duties at the nursery. He only got cranky once – when the GPS stopped working. I kept driving anyway, then finally demanded to know where we were going. He replied, "At this point I don't really care." I considered to fire him on the spot, toss him from the car and never see him again. Fortunately I simmered down after ten minutes of silence...and then I saw the sign to the Asheville airport where our Budget GPS was quickly repaired.

I'll admit that I was out of my element on the East Coast, and I could only guess the identity of certain species. Last fall Phil and I saw a brilliant Sorbus, but I had to research back at home that it was S. americana. Another identity error was due to poor eyesight, as well as being dumb, when I photographed a pyramidal Abies – fraseri obviously – that turned out to be, on closer examination of the photo, a "Red Spruce," Picea rubens. My explorations should have been led by a budding field naturalist, perhaps a graduate student named Caroline, with binoculars around her neck and dressed in a neat little ranger suit. But since I was stuck with Seth, I stopped in at the Smoky Mountain Visitor Center near Cherokee, NC and purchased two pretty-good plant books. The Park receives over nine million visits per year, as long as Obama keeps the gates open, and a good many of the pasty over-fed tourists were jammed into the Center buying T-shirts and trinkets.

Less than a mile into the park I slammed on the brakes and reversed the car. Four or five trees with colorful trunks were growing next to the road. I parked the car, got out and crossed the road. Nice! They were Stewartias. They were not yet in bloom, but when they are they are commonly called the "Mountain Camellia," or Stewartia ovata. They were of impressive size and I was puzzled how Phil and I could have missed them the previous fall. My flower book mentioned that more of this rare species could be seen on the other side of the Smokies, near Gatlinburg, but we never found them. One thing I've learned on my hundreds of plant trips around the world, is that you'll often see a species only once, and if you want a photo you had better take it then. We never saw Stewartia again for the remainder of the trip, and this sighting was the first time I have ever seen the genus in the wild.


Trilliums were dotting the forest floor, while Cornus florida did the same in the canopy. By far the largest froth of white, which at first looked like snow, consisted of thousands of foot-tall Phacelia fimbriata. The genus name is Greek for "clustered," and the specific name fimbriata means "fringed with hairs." I was not overly impressed when I first sighted the swarm, but up close I found the dainty flowers delightful. Many other species of Phacelia can be found on the west coast of California, adapting to a wide range of conditions. My daughter has a friend named Phacelia, and I doubt she was named for a "cluster," so I hope one day to ask her parents the name origin, he being a Jewish teacher-musician and his wife a Taiwanese piano instructor. And of course, Phacelia is absolutely beautiful. 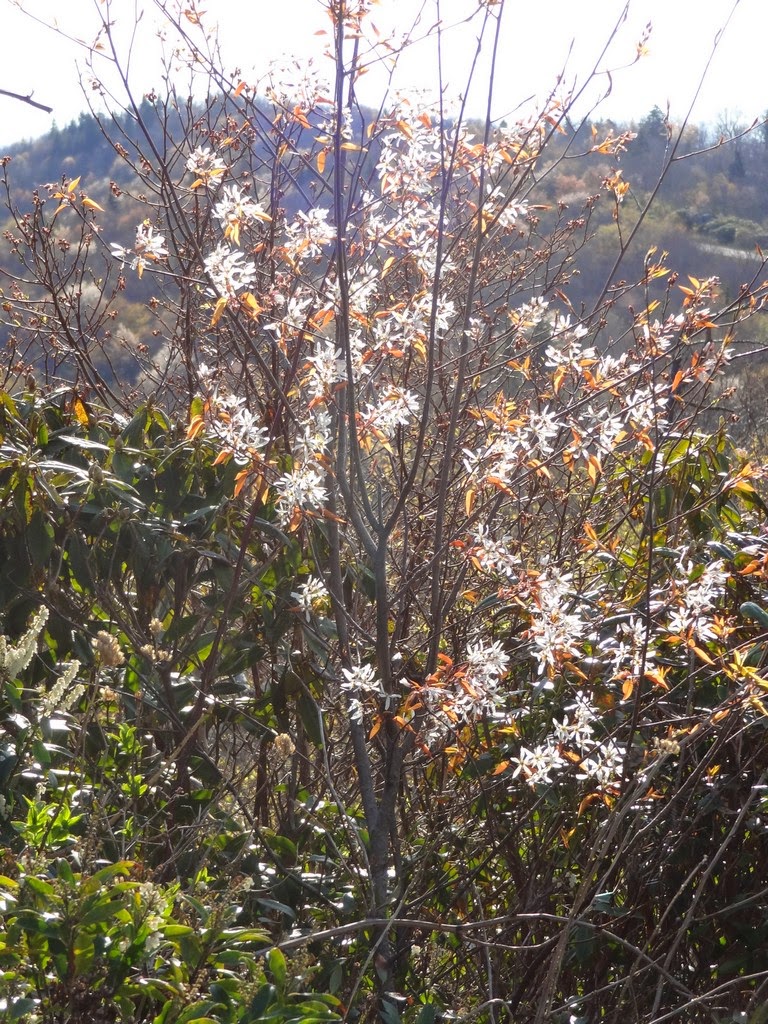 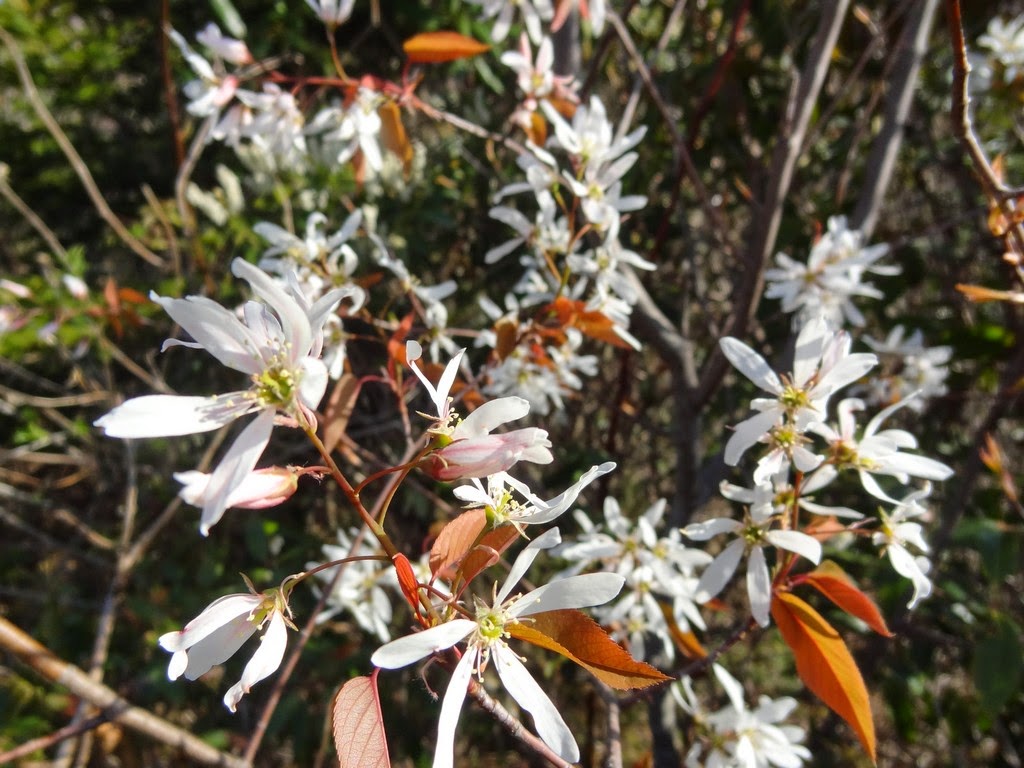 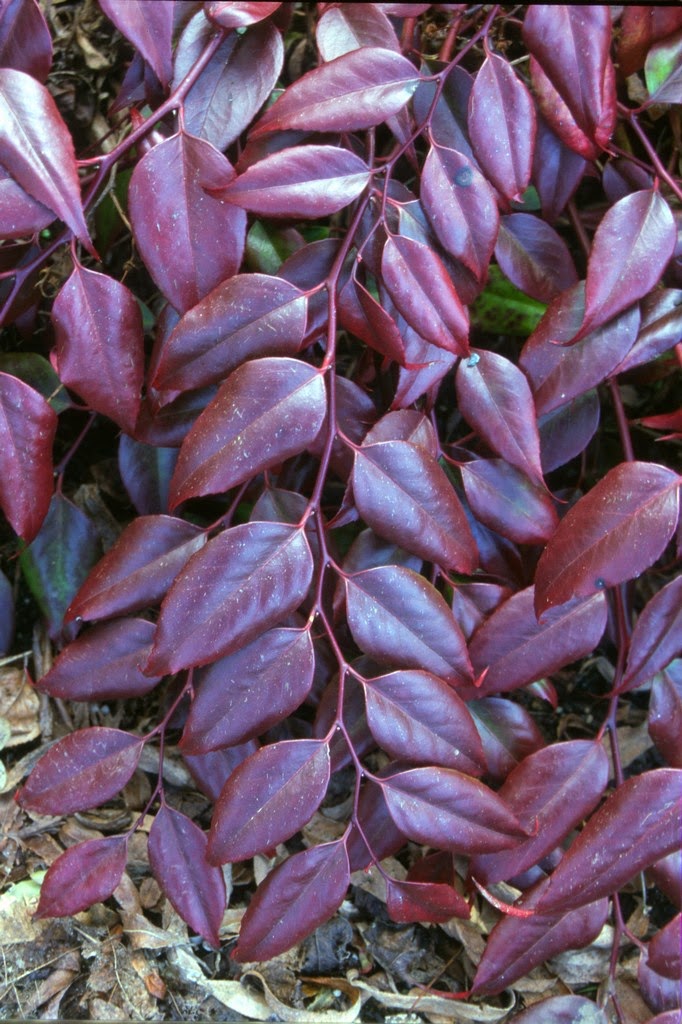 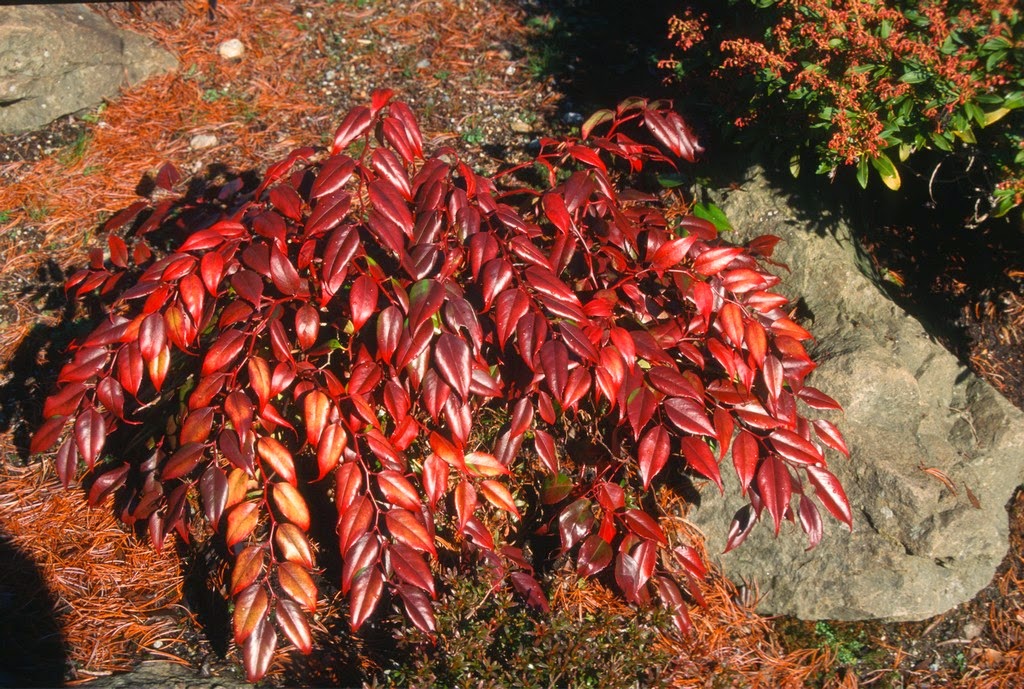 That wasn't the end of the white-blooming stuff. Amelanchier laevis and Viburnum lantanoides made their appearance. Leucothoe fontanesiana, the "Fetter Bush" or "Dog Hobble" formed a low thicket. I find it to be one of the least inspiring members in the Ericaceae family, with the notable exception of L. keiskei from Japan. Don't eat any part of Leucothoe as it is highly toxic, and can cause headache, depression, weakness, nausea and paralysis, all of which afflict me on a normal day at the nursery. The genus name is from Latin leucothoe, a legendary princess turned into a fragrant bush by Apollo. I assume the species name of fontanesiana refers to its arching fountain-like branches with tiny white flowers.

Far more impressive was a small grove of Halesia tetraptera, commonly known as "Common Silverbell" or "Carolina Silverbell." It is a tree in the Styrax family and I used to grow it, including a pink form, but I discontinued due to lack of sales. Some people refer to the drooping-bell flowers as "Heaven Above." The genus was named for Stephen Hales, an 18th century clergyman and scientist, and if you search diligently you will discover a monument to him at Westminster Abbey. Tetra is Greek for "four" and ptera, means "wing" or "feather," referring to the four-winged green fruits which ripen to pale brown.

I stopped on our scenic road to get a closer look at a tiny green boxwood-like shrub loaded with cute, tiny white flowers. I could see that it was ericaceous, but again I was out of my element. Paging later that night through my plant book I could identify it as Leiophyllum buxifolium. The plants I saw were hugging a rock ledge and only about 18" tall. I've never seen the "Mountain Myrtle" for sale, and I suspect that it would be touchy in a low-land garden or in a container. Seth was becoming anxious, even though the Park traffic was light in midweek, for my increasing penchant to stop the car anywhere on the road and jump out to examine pants.

Also growing on a rock ledge was Galax aphylla, I thought at first, but eventually decided that the leaves – still orange-red from winter – were too small and that it was probably Shortia galacifolia, the "Oconee Bells" which can display single white or blue flowers. Oconee is a county at the very tip of northwestern South Carolina, and gets its name from the Cherokee Ae quo nee which means "land beside the water." The rare Shortia was not yet in bloom, in fact a lot of plants were delayed by the area's brutal winter and the fact that we were 4,000' up in elevation. Shortia was named by the French botanist Andrè Michaux for Dr. Charles Short, a botanist and physician from Kentucky, but unfortunately the latter died fourteen years too soon, and so he never saw the plant. Note the similarity in the genus name Galax and the specific name with Shortia galacifolia. The origin probably is from the Greek word galaxias which means "milky," referring to the Milky Way, our own galaxy. I don't know who named Galax, or what the connection is with the Milky Way, unless the name refers to summer's leafless flower stems which rise above the foliage and open into small pure-white blossoms. 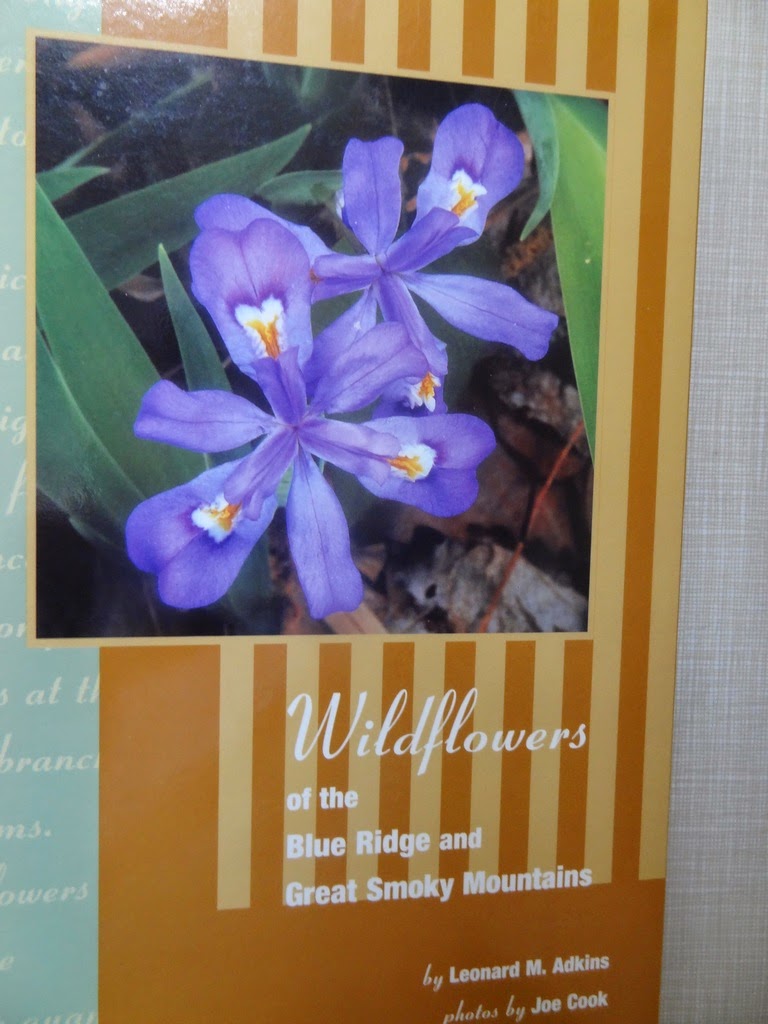 I think we were on the Blue Ridge Parkway to the north, on our last day, when we discovered a large Aesculus flava with its pale-yellow flowers. The "Yellow Buckeye" is also noted for dark-brown furrowed bark and for intense yellow autumn color. Linnaeus named the chestnut genus after the Roman name for an edible acorn. The specific name flava is from the Latin term for "yellow." Nicely situated beneath the Aesculus was a clump of Viola, but there are many species, and they can hybridize, so I cannot identify it. Also nearby was a dwarf Iris, probably Iris cristata, and it was the wildflower on the cover of one of my two plant-book purchases. 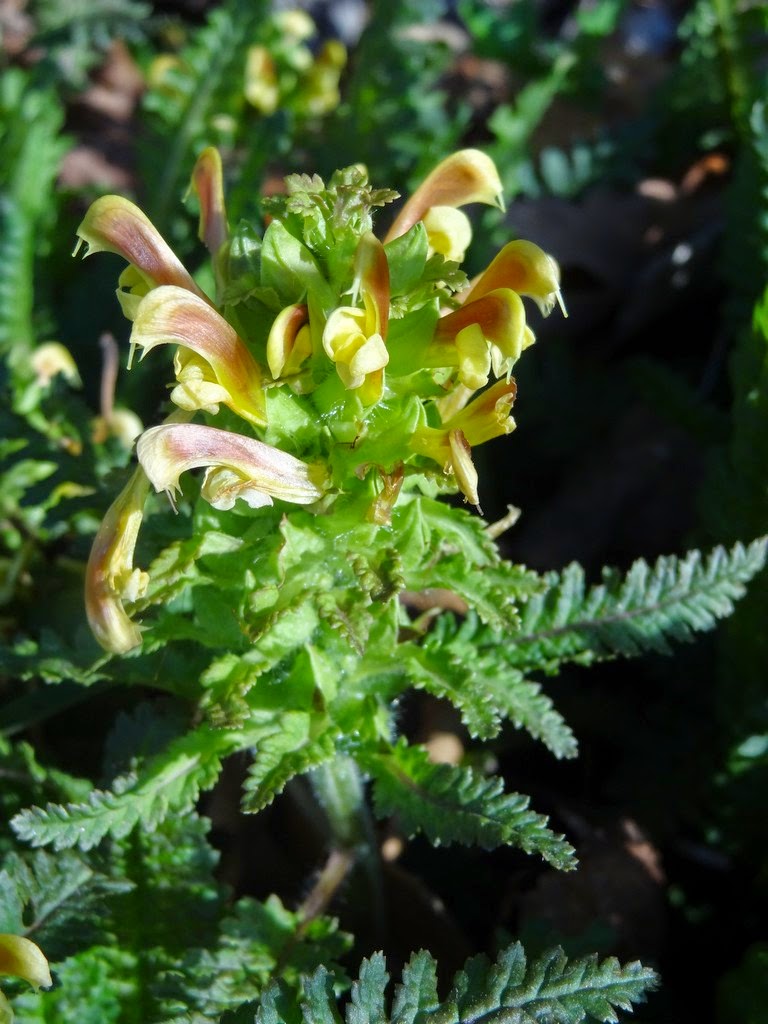 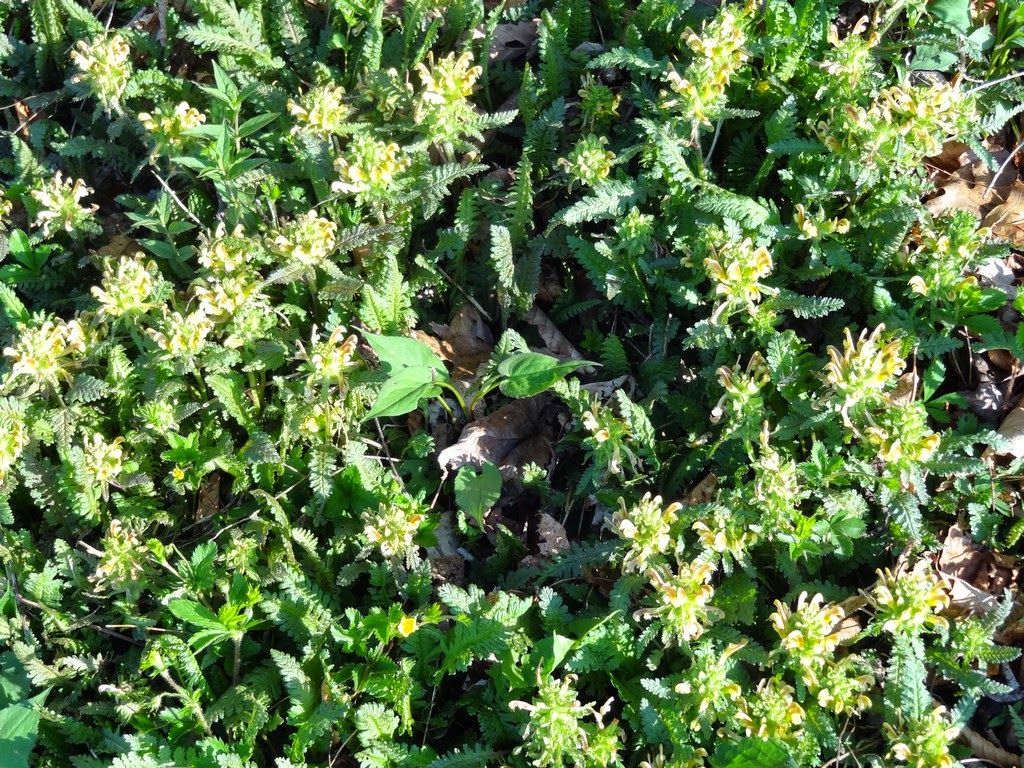 A brief mention of some other flowers in bloom includes Pedicularis canadensis and Uvularia sessifolia, which I first took to be a Disporum. Podophyllum peltatum was emerging with shiny new growth but wasn't in blossom yet. Silene virginica, known as "Fire Pink," is a wildflower in the "Pink" family (Caryophyllaceae), and was startling for its vivid color. 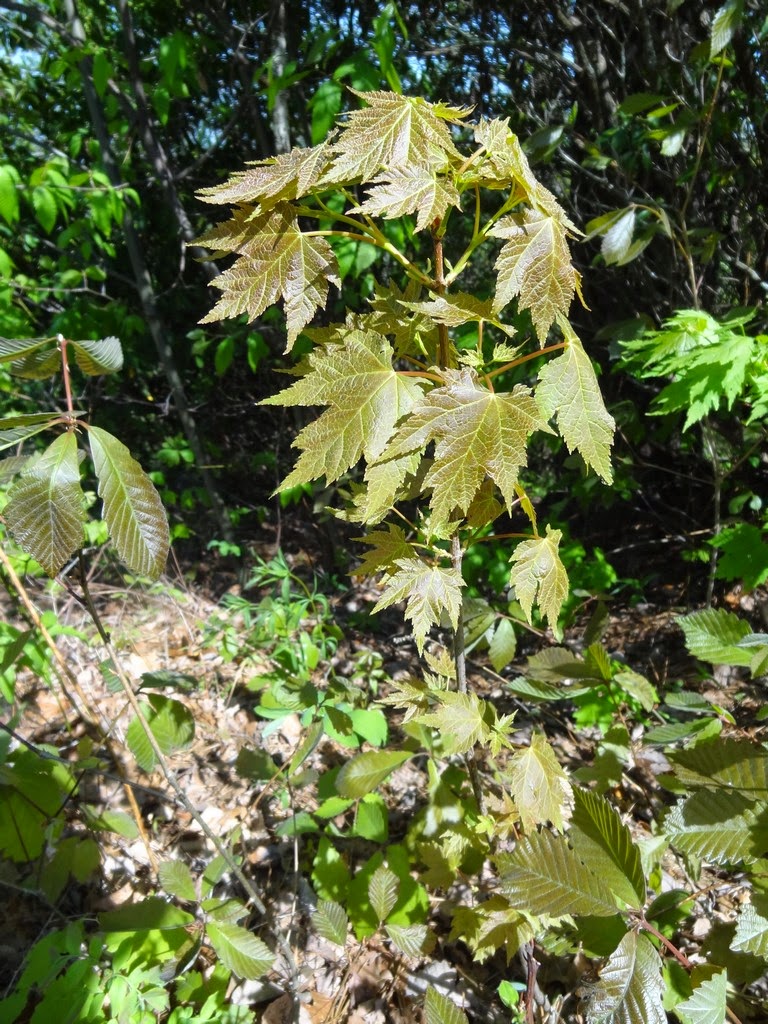 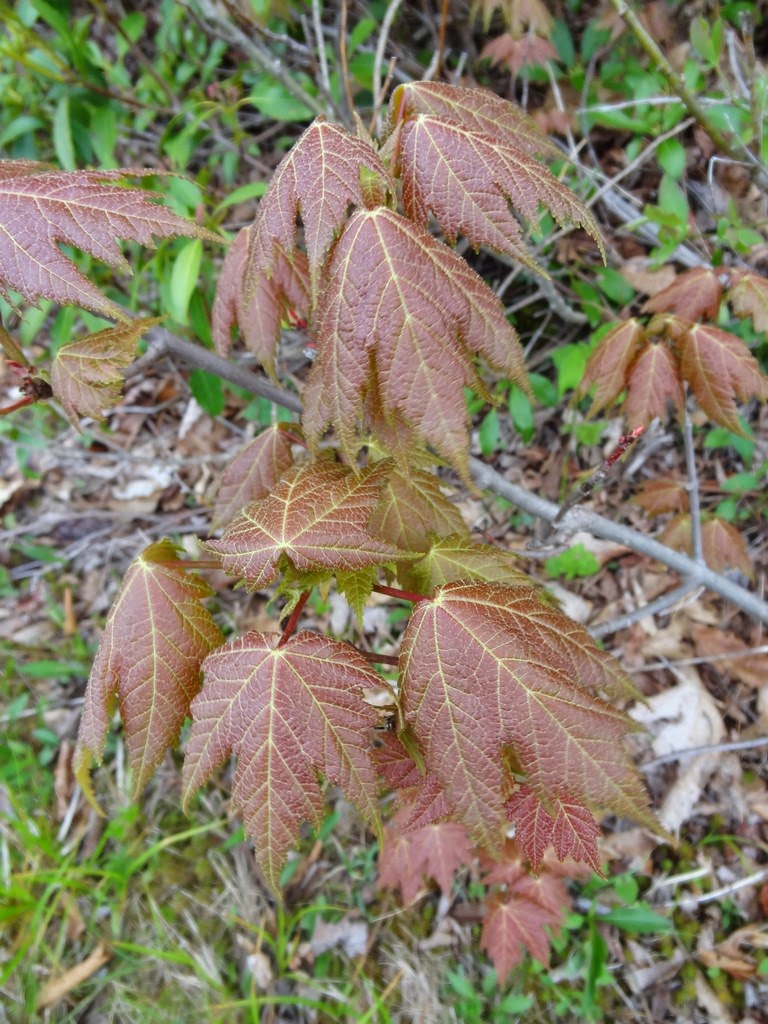 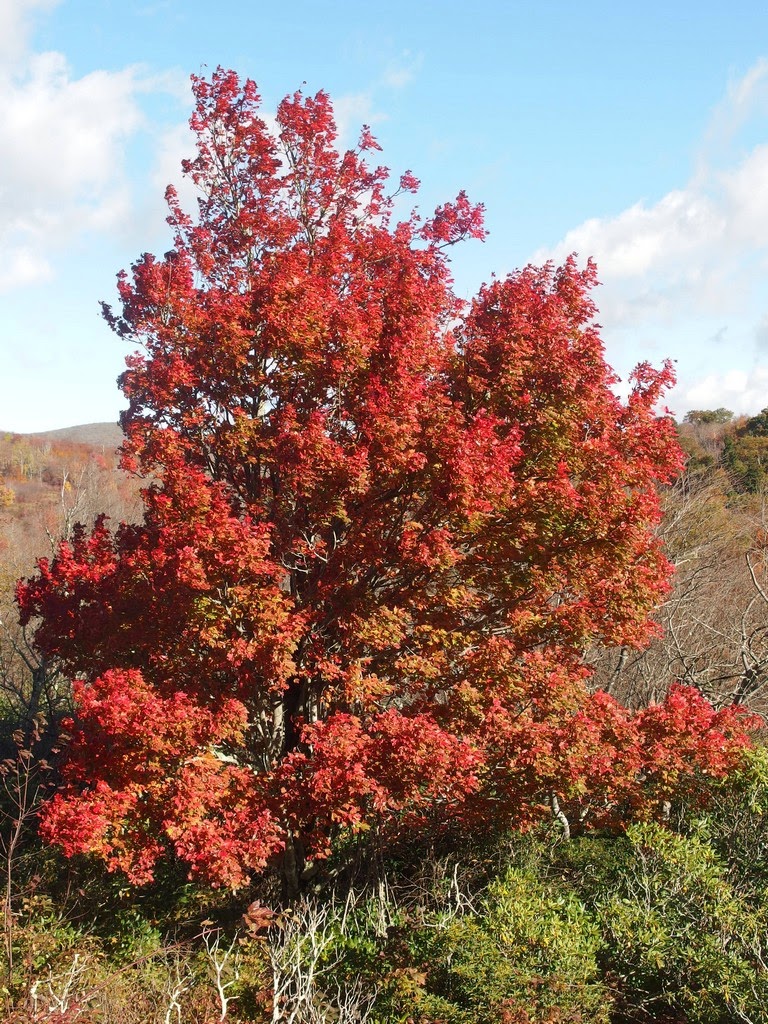 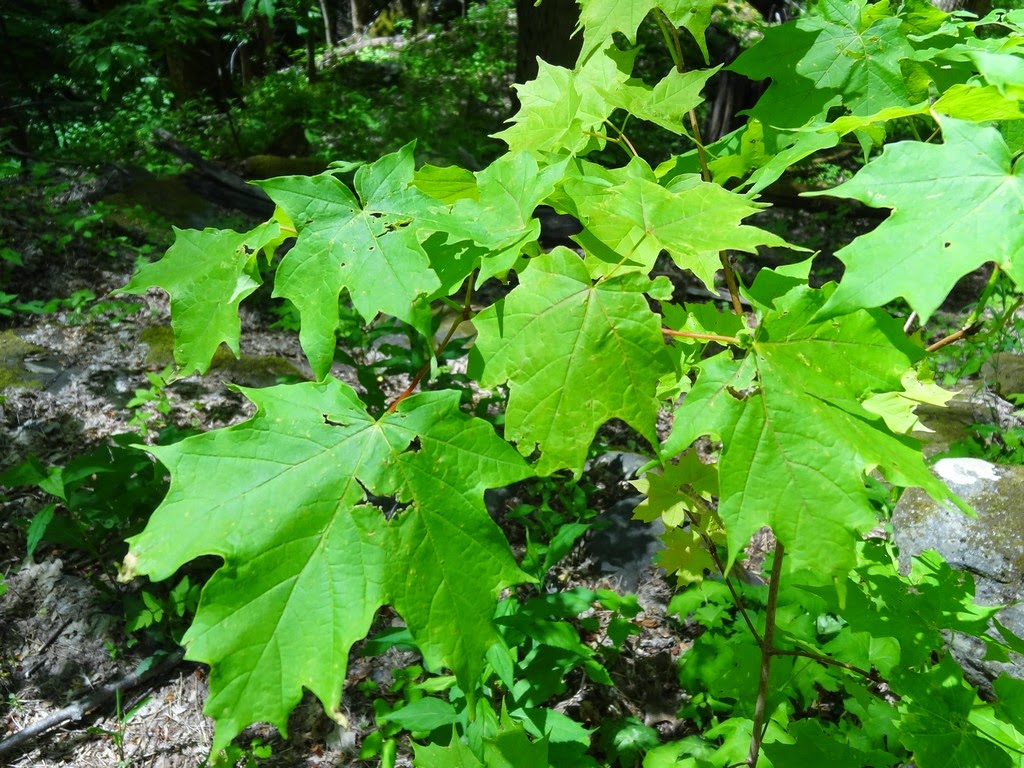 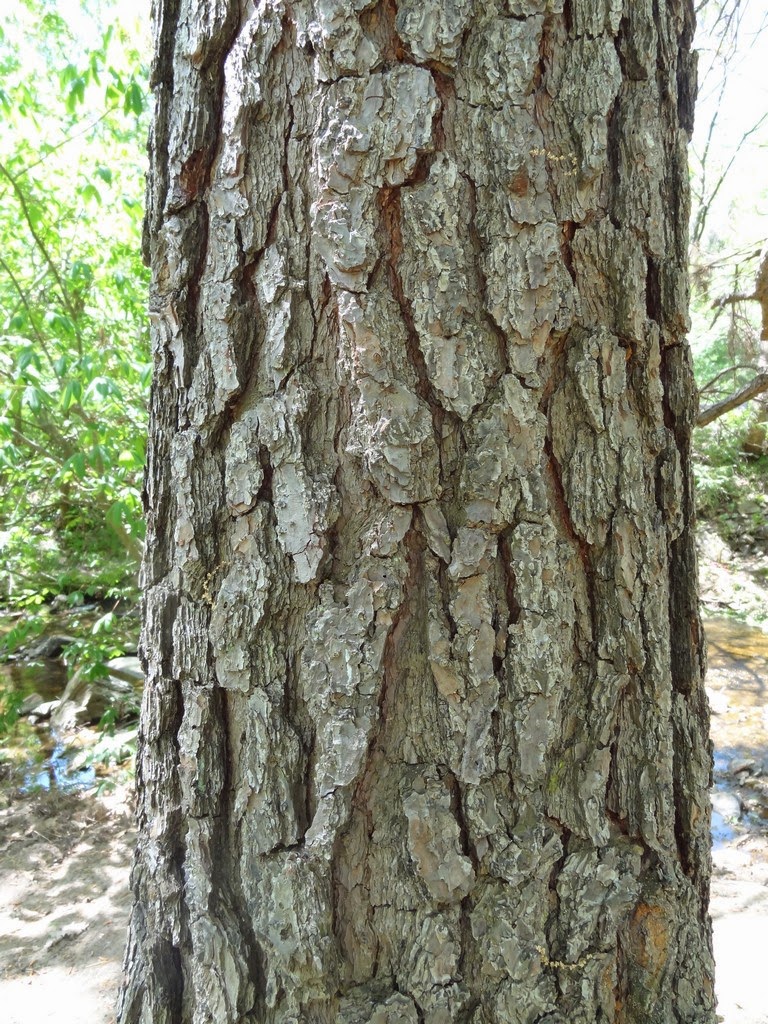 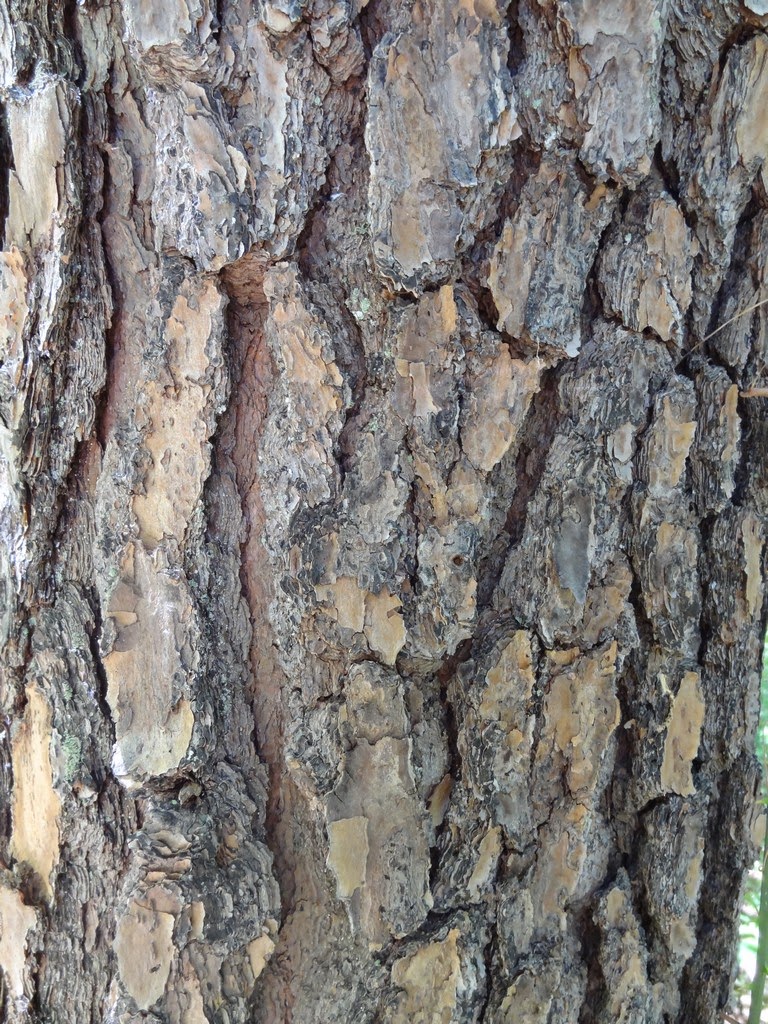 Seth and I encountered a myriad of other tree species of Rhododendron, Quercus, Acer, Pinus etc...that I never did get around to identifying. I have come to accept that I am not an eminent botanist, and that I do not possess sufficient energy or acumen to fathom everything. I probably know more about trees than many of the other 9 million visitors to the park, but I'm certain that no one appreciates them more. 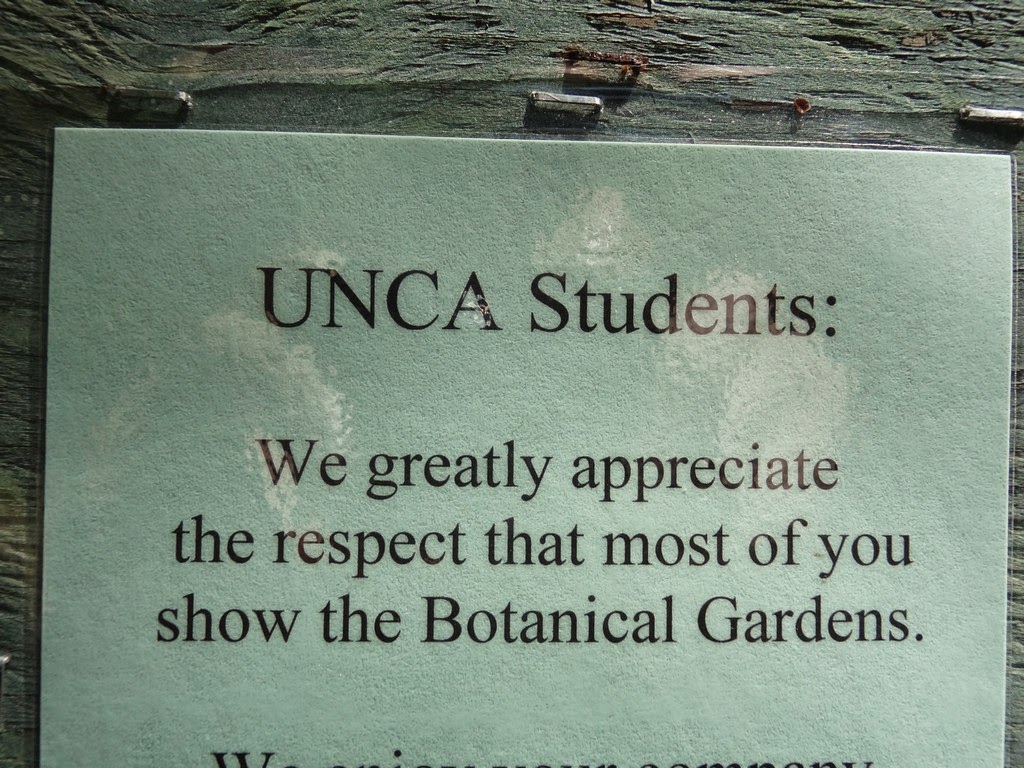 I feel the need to terminate my account of our epic week in North Carolina and Tennessee, when easily I could squeeze out another blog or two. But enough; time to return to the present in Oregon. I'll leave you with some photos of the impressive North Carolina University at Asheville Arboretum, which is not the same as the nearby North Carolina Arboretum. Of course that's confusing, but the former contains plants native to North Carolina, with great labeling. It helped me to sum up my floral experience in this exotic land.

In last week's Tennessee blog (May 23, 2014) I mentioned that plantsman Don Shadow took us to lunch at a local truck stop where no menus were used. Just one (quite large) meal was served, take it or leave it. Sue Olsen, author of Encyclopedia of Garden Ferns responded with her humorous experience:

"Several years ago I toured the SE with some fellow fern enthusiasts. We had a newly converted couple who were now dedicated vegans. We spent one night in Tennessee and at breakfast they were having issues with the menu and discussing this with the waitress. She finally said [Southern drawl here please], "honeys, this is Tennessee and we don't Do health down here."