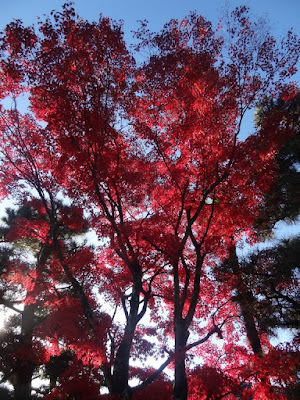 My wife's parents, Yusuke and Fumie Nagamine from Tokyo, knew a few months in advance that I would be visiting Japan at the end of November, 2019, and that I would be coming for “business.” I didn't buy or sell anything, so my “business” – as in a tax write-off – was to see and document the native flora, whether the plants were carefully crafted in a garden setting, or just naturally biding their time in their mountainous habitat. Both in-laws diligently researched and set up an itinerary that would satisfy my goals, and they succeeded in providing a trip of a lifetime.

By train we went to a temple in an area of Tokyo that featured the oldest (probably) Ginkgo biloba, supposedly over 600 years old. The leaves were just beginning to turn yellow, but the area under it, a cemetery, was completely clean of leaves or fruits, so I assumed that the venerable old specimen was a male. Only 100 feet away was a much younger Ginkgo and she was showing off with butter-yellow foliage and had already lustfully dropped hundreds of seeds. The Grandfather Ginkgo had a horrible canopy and a somewhat rotten back side – caused by an incendiary bomb at the end of WWII – but the trunk was massive. I'm sure that he was happy to have the fecund, younger female nearby to help sustain him in his old age, so in that case the pair resembled old Buchholz and his younger Japanese wife, Haruko. 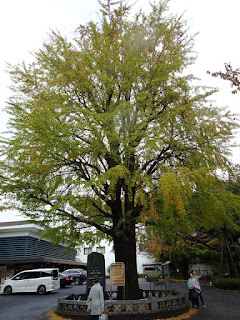 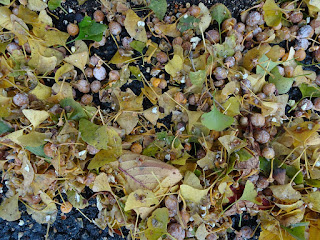 The female Ginkgo has a stone tablet that reads: On this spot Townsend Harris opened the first American legation in Japan. July 7, 1859. Harris (1804-1878) was a New York City merchant and minor politician who did some business previously in the Orient, and while in Japan he “negotiated” the Harris Treaty which opened Shogunate Japan to foreign trade and culture. According to persistent legend, Harris adopted a 17-year-old geisha named Kichi Saitou – who can blame him? – but she was heavily pressured into the relationship by Japanese authorities, and then was ostracized after Harris' departure. I don't know if the female Ginkgo existed at the time of the Harris affair – somehow it didn't look to be that old. “Kichi” is a provocative name if you ask me. The word ki can mean “tree” and chi chi can mean “female breast,” but Haruko insists that the geisha's name has nothing to do with “breast tree.” It would be a wonderful coincidence if it did, and that a female ginkgo was placed where old Harris did his deeds. Anyway kuchi means “lips” in Japanese, and it's fun to think about kichi's kuchi for this old pervert.

The male Ginkgo had a number of pendulous breasts, some of which were nearly hanging to the ground, but they're not particularly attractive appendages. It is known as the “Giant Ginkgo-Tree of Zempukuji,” the name of the accompanying temple which was founded in 824. Holy-man Shinran Shonin was teaching doctrine at the temple, and he concluded by emphatically placing his staff in the ground. Soon the staff began to put forth buds and spread branches, finally growing into the tree we see today. 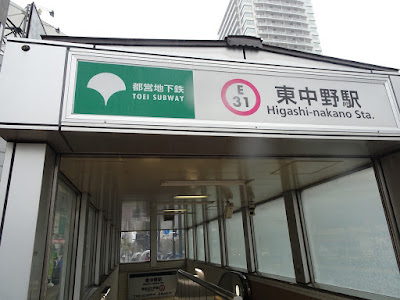 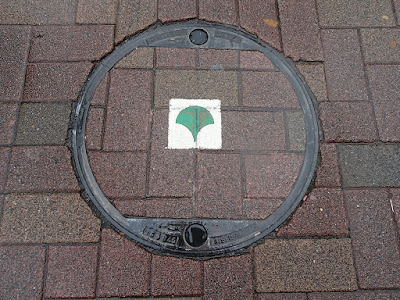 We left the Ginkgo pair to themselves and boarded another train to see Ginkgo avenue in Tokyo. Ginkgo is known as “icho,” and is the official tree of Tokyo, and the icho leaf is the symbol of Tokyo where you will see it above subway stations, on manhole covers and on the sides of buildings. Icho Namiki is the 300m-long avenue lined with two rows of Ginkgo on both sides. I was surprised that they were heavily pruned into narrow pillars and they were maybe 100 feet tall. When Haruko was a child the trees were not so severely pruned, and she and her best friend Chihiro would ride their bicycles through the leaves every November. When Chihiro – now living on a distant island – saw the photo (above) she was shocked by the excessive “haircuts.” These days the avenue is open for pedestrians only in November, with nearby policemen patrolling the throng of visitors. Alas, we were a few days early for the yellow carpet, but what's amazing is that all of the trees will shed at once – “in one consent,” according to former U.S. poet-laureate Howard Nemerov. Peter Crane, author of Ginkgo: The Tree That Time Forgot (2013, Yale University Press) says that “Ginkgo has the most synchronized leaf drop of any tree” he knows.


According to Peter Crane, over ½ million Ginkgo are planted as street trees in Tokyo, and amazingly a very large Ginkgo can produce nearly a million leaves per year. Imagine the number of leaves produced at Icho Namiki since there's about 150 trees total. They were planted in the 1920s when they were about 20' tall, and thank God they survived WWII. I find it amazing that with Japanese maples, yellow, green or red foliage in spring and summer can turn to yellow or orange or red in autumn, but a Ginkgo only turns to yellow, and that includes our introduction of Ginkgo biloba 'Blue Cloud'.

The most impressive Ginkgo I saw in Japan was a few days later in Kyoto. I don't know if it's ever pruned or not, but it is a great spreading specimen over 400 years old, with its lateral branches supported by strong posts.* A fence protects its root zone, but other than that it is gloriously alone in the middle of a couple of acres, “alone” if you don't consider me or the other dozens of tourists who approach it. The accompanying temple is named Nishi Honganji – ji means “temple” – the origins of which go back to the 14th century, and today it is designated as a UNESCO World Heritage Site.

*Due to its flat-top shape it is affectionately referred to as the “upside-down” Ginkgo. Another common name is the “water-fountain” Ginkgo, as apparently water sprayed out of its canopy during a great Kyoto fire, and thus the tree was able to protect itself. 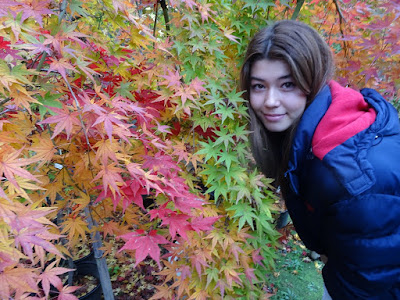 Every Ginkgo we saw in Kyoto was in sync with the old temple specimen for autumn color, and whenever the sun broke through the tourists – yes, tons of Chinese – were recording the event with their telephone cameras. One wonders how many digital clicks occur in Kyoto every day in autumn, what with the brilliance of the Japanese maples and Ginkgoes. I add my photos to the blog, but what does everybody else do with theirs? Who knows, maybe everyone else was on a “business” – tax-write-off – trip like me? 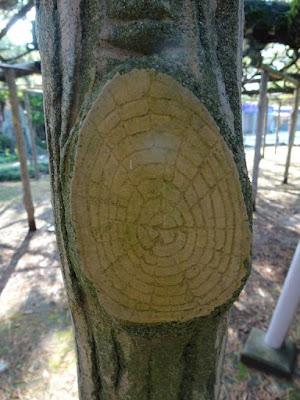 My daughters wanted to sight-see in Tokyo, in particular the Shibuya Crossing, an insane intersection (called the Scramble) rumored to be the busiest in the world where upward to 3,000 people cross at a time, coming from all directions at once. Naturally pop stars want to have a video shoot with the mass of humanity surrounding them. I elected to pass on that event and instead went with Haruko and her father to see the oldest Japanese black pine in the Tokyo area. Yusuke (father-in-law) rather enjoyed having me in town because, now retired, I'm his excuse to discover new things for himself. We deboarded the train at the Koiwa suburb and gave the taxi driver instructions to take us to the great pine. Driver nodded in affirmation and soon dropped us off at the Zenyoi temple complex where the massive Pinus thunbergii (650 years old) hogged a large portion of the courtyard. Like the old Kyoto Ginkgo, the pine was low and spreading and its branches were supported with concrete poles. The poles could have been boring to do the job, but instead they were ornamental with bark-like texture and fake cuts here and there to suggest living tree rings.

Thank goodness my daughters weren't here because 5 seconds is all they would need to “see” the pine tree, then they would have sat on a bench and sulked while their father wasted the afternoon circling around the stout specimen. The fun part is that the light was constantly changing during the partially sunny afternoon, so every point of view was unique, and I've never felt a tree to be more alive with its own treeanality. I'm told that the Japanese locals believe that God lives in the tree, and I suppose they're right. At the time we were the only visitors, but we attracted the attention of the temple's maintenance man, a little guy with a happy face. He explained to Haruko's father that he was 85 years old and couldn't imagine a day apart from his beloved pine. Yusuke informed the man that I wasn't just an ordinary tourist, but that I was his daughter's husband, a “famous maple botanist from America.”


The last of the venerables that I'll mention is the “white sugi” (Cryptomeria japonica) that is up in the Kitayama Mountains north of Kyoto. Hardly any tourists know or would care about it, but Haruko's mother did her research, and her father rented a van with driver, so we journeyed on a rainy morning into the mountains. The tree (600 years old, if I heard correctly) is revered by the local denizens as a power presence, and it was surrounded by a gate and a shrine or two. The trunk was light-colored, not exactly white, but not the typical reddish-brown of the species. Further unique was the abnormality that it never produced pollen. The man-planted forest in the area was offspring produced by cuttings, so the entire hillside consisted of one clone. There was a sawmill nearby and you can see from the photo that every tree looks identical and perfectly straight. For centuries the wood from the Kitayama Mountain area has been prized for tea room and tea house construction, and even today it is used for elegant interior wood work. The other plus about the pollenless forest is due to a serious hay fever (kafunsho) problem that many Japanese suffer from. Hay fever was not common until reforestation practices after the War led to mature trees with increasing amounts of pollen, and today approximately 25 million (20% of the population) suffer, and it is common for them to take hay-fever vacations to less polluted areas.

The Japanese person in the photo above is Yuki Tamori, an intern who worked and lived with us for a year in about 2013. I could see that he was no longer a simple boy, but that he had grown into a man. At the nursery, I would greet him each morning with “Today?” “No,” he would reply. “Tomorrow?” “No, not tomorrow.” “Tamori?” “Yes, I am Tamori.” The last time that I saw Mr. Tamori before this day is when I dropped him off at the Portland airport for his return flight home. We got out of the car and unloaded his luggage. I shook his hand and thanked him for being a wonderful worker and member of our family. I glanced back as I drove off, and there was Yuki feebly waving one hand with tears streaming down both cheeks. I welled up a bit too.
Posted by Talon Buchholz at 1:41 PM