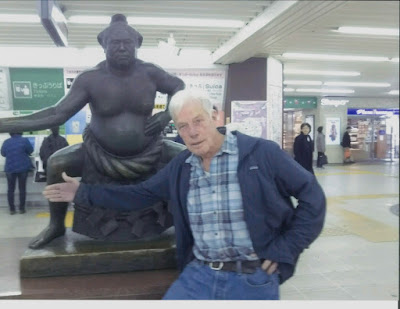 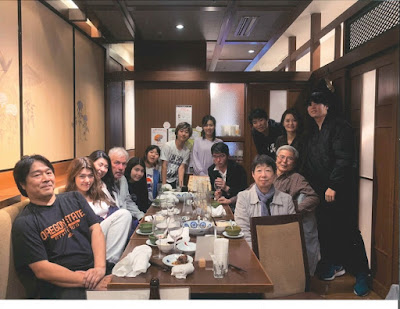 I surprised my family this past summer when I announced that I'd like to visit Japan in the fall. My wife and two daughters are bilingual and they go nearly every year, but I stay at home to feed the dog and to make sure the nursery doesn't collapse. Old photos from Japan show that I used to have brown hair while now my head is stark white. We decided to skip Thanksgiving turkey in America for a plate of sushi instead, and the best part was reuniting with Haruko's family – mother, father, a brother and a sister plus their kids. I was impressed that my two daughters are totally fluent with their cousins while they shared past memories and talked about the pressures of school (or getting into the right school). 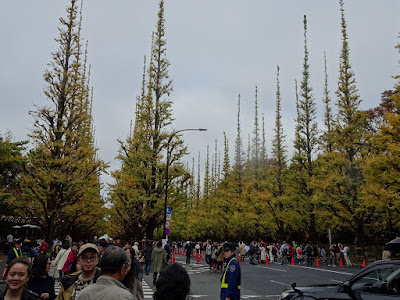 Family aside, I made it clear that this would be a business trip, so on the second day we visited the famous Ginkgo street in Tokyo in the morning, and then two nurseries in the afternoon. Our ride and guide for the nursery visits was ex-intern, Takahiro Bito who labored diligently for a year in Oregon in 2015. Bito – who needs a first name when your last name is Bito? – is tall, congenial and intelligent, and based on his internship at Buchholz Nursery he was selected for a choice job as a horticultural rep for a large company. Apparently I have a smattering of fame in Japan, probably not for my nursery career, but as the lucky chap who was able to land Ms. Haruko (who everybody knows) as a wife. When we got into Bito's car he apologized that it was so small, but he maneuvered skillfully in the Tokyo traffic, and like the British he drove on the left (wrong) side of the road. H. thanked Bito for attending to us and he replied, “You took care of me for a year, what is one day to help you?”

Our first stop was Kobayashi Maple Nursery which was a new destination for me. In Masayoshi Yano's Book for Maples Acer palmatum 'Ryu sei' (or 'Ryu sen') was first distributed by Kobayashi in 1991 with a synonym of 'Millennium Green' which nobody uses at all. For what it's worth the name 'Ryu sen' is used for the patented selection, but there's controversy on both sides of the Pacific...which I won't go into. In any case seedlings readily germinate from it and about a third display the same cascading habit. In the middle of Kobayashi's nursery is a large specimen that I assumed was the original plant. It receives protection from a bench built around it, atop which sat the company dog. My daughters don't know or care about the maple but they lost no time in befriending the mutt, and they left me to wander the nursery alone.

Autumn color was brilliant on the maples and a large number of people were visiting – I don't know if they were actually shopping for trees or just enjoying the color. I'll be blunt: the place was a mess with crooked maples in containers mixed in with those planted in the ground. Our visit coincided with the tail-end of a Tokyo typhoon so many plants were lying sideways in the dirt. I don't know how profitable the company is, I just know that due to its relatively small size and lack of quality trees I could never make a living with it. Unfortunately nothing was labelled and I wondered if the Japanese care at all about a tree's identity. Haruko found a tree with tiny leaves colored red and yellow. She asked K the name and he replied, 'Orange Dream'. Yes, that's how 'Orange Dream' colors for me too, but the leaves on my plants are at least three times larger. With water and fertilizer and rich soil I am able to push maples into far more vigorous growth, so again I wondered how K was able to make a living. Nevertheless we thanked him for the opportunity to visit and we both stood to attention for a photo, then after a couple of bows we piled back into Bito's car.

Our next destination was Shibamichi Honten (nursery) and it was 16 years ago that I last visited. Akira Shibamichi was waiting for us outside in a lawn chair and I was surprised that he remained the same age as before while I definitely had grown old. Indeed he displayed boundless energy as he circulated from tree to tree explaining its story – in Japanese – which Haruko dutifully translated. It seems that everything we saw was not “normal” in one way or another. For example, an Azalea 'Tsatsuki' that flowers all year, a Michelia that flowers orange, a variegated Ilex latifolia etc.

Apparently Shibamichi likes me because he offered to give me any cuttings that I wanted, but I wasn't going to cause a stir at customs back in America. 16 years ago we toured his nursery, and then visited other nurseries with him until it was dark and cold. Then we went into a comfortable bar and drank warm sake while he continued to flirt with Haruko. She is very skilled at floating with old geezer plantsmen like myself and Shibamichi, and after our first visit he sent a care package with some fantastic trees: a variegated Daphniphyllum, a weeping Stewartia monadelpha and others. I don't know if he finds all the unusual plants himself or if they are brought to him by others, but probably both since he is revered as the Godfather of Horticulture in Japan.

At the end of our visit we sat in Shibamichi's office and he pulled 5 or 6 scrapbooks filled with plant prints. After all it was the end of November when most of his leaves had dropped and flowers were long gone. I was most impressed with a Stewartia malacodendron – a southeast USA native – with the cultivar name of 'Beni suji' which means “red vein.” Though a species considered difficult to grow, it has the prettiest flower of all, and now Shibamichi has one with red markings.

I don't know if I'll ever acquire the Stewartia --time is running out for both of us. But speaking of Stewartia, I asked to pose with him with his weeping Stewartia monadelpha. Generally speaking I'm not very successful at grafting Stewartia, which is a shame because there are some wonderful cultivars. I thought that Shibamichi might provide a useful tip and reveal an exotic secret. Instead he shrugged and suggested that maybe I just had “poor technique.” I laughed – “Sayonara” then.
Posted by Talon Buchholz at 8:52 AM