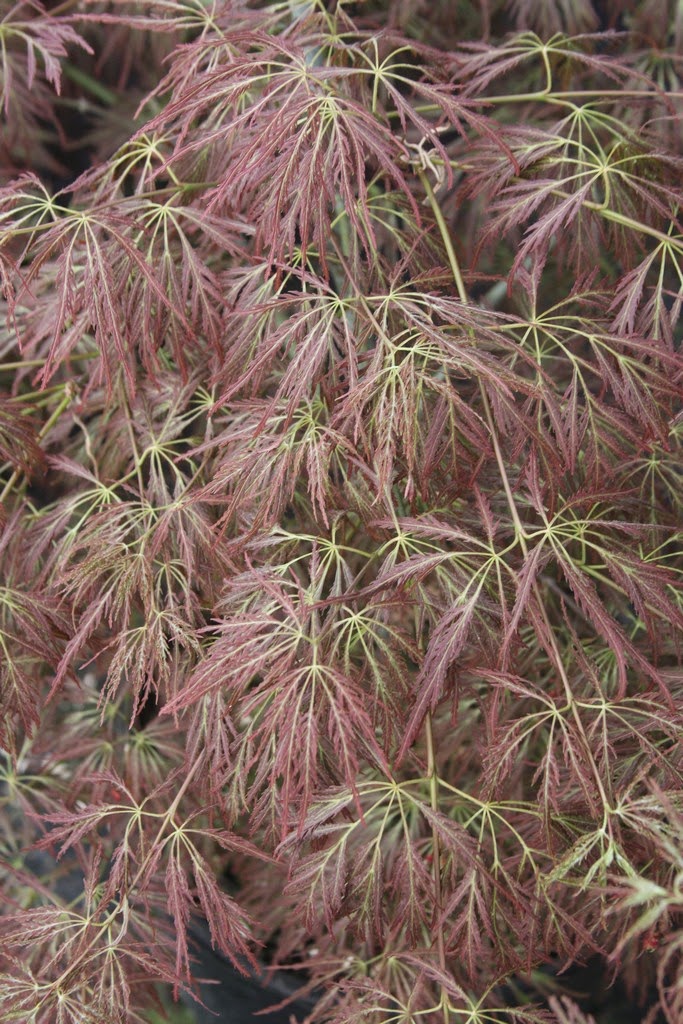 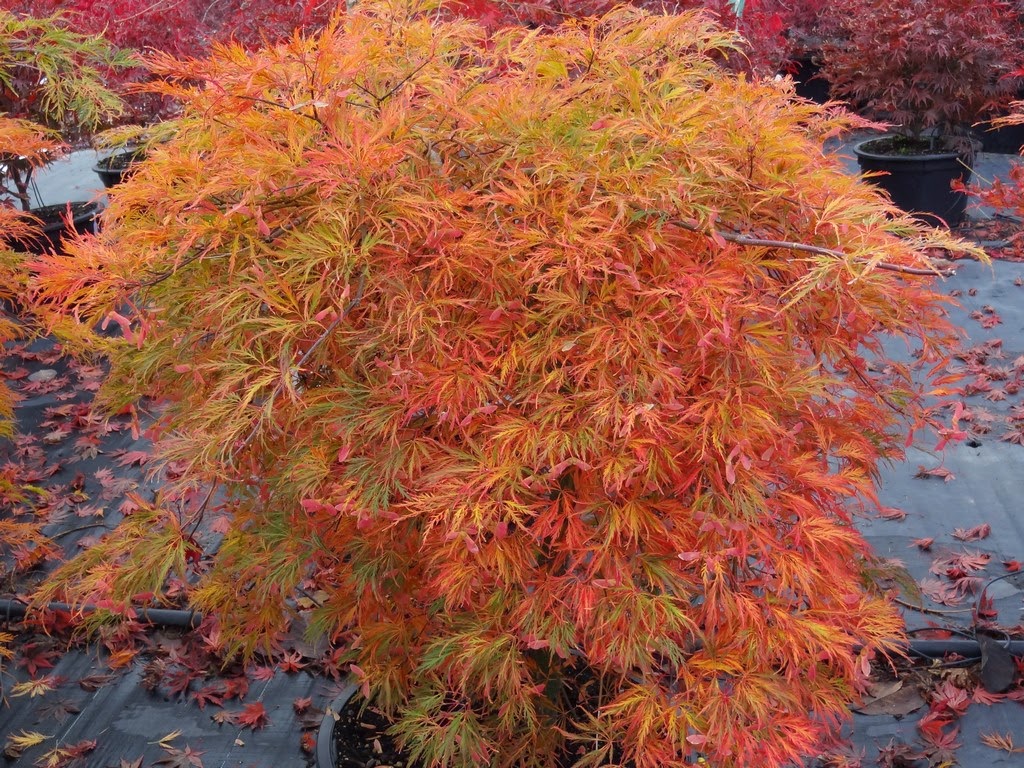 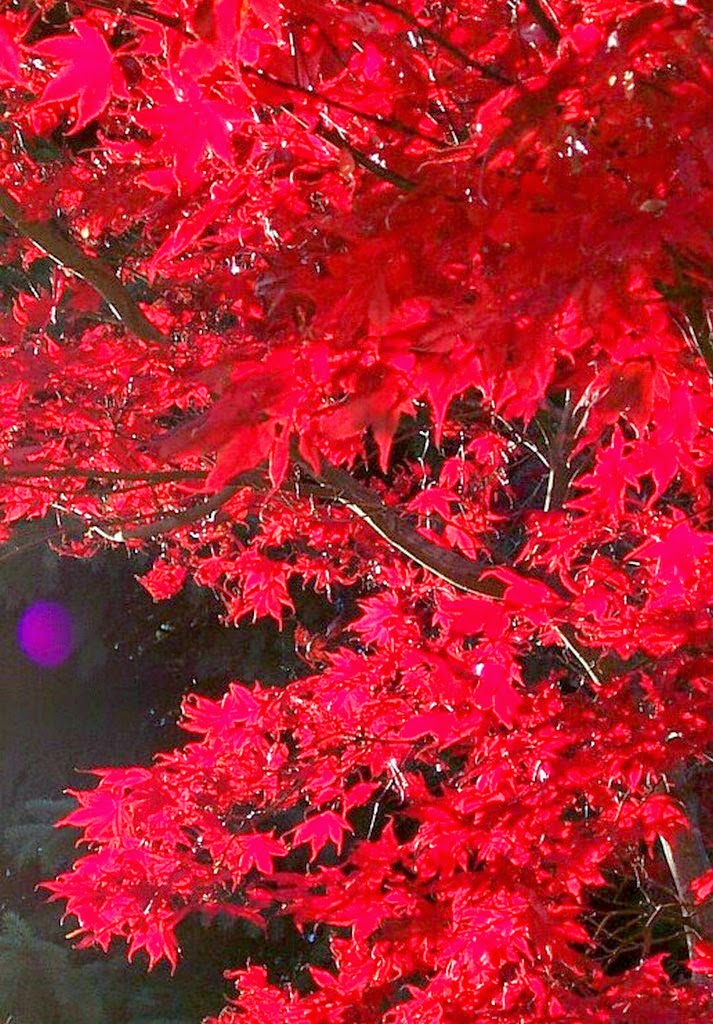 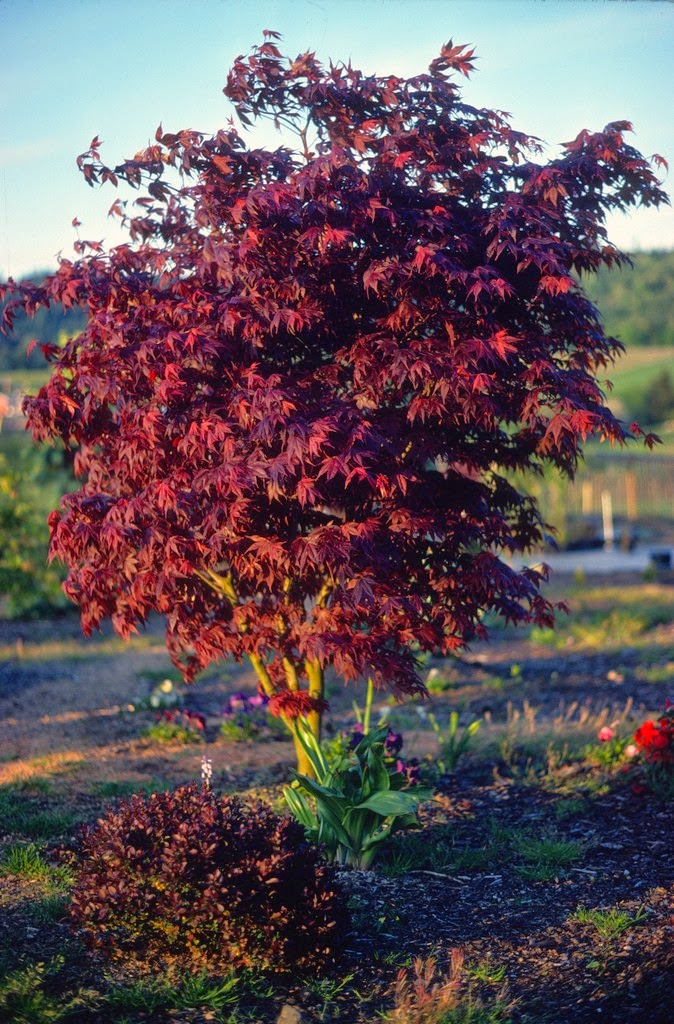 In horticulture we have many wonderful plant names, some that are inventive, thoughtful or aptly descriptive; and then we have some that are absolutely lousy. Last fall in North Carolina, at the Maple Society Convention, Mike Francis gave an interesting presentation titled, "What's in a Name?" He went on to explain the plant-name importance, especially from a marketing point of view. If I remember correctly Acer palmatum 'Dr. Brown' was the worst, and Mike decided that 'Bloodgood' was the best name. 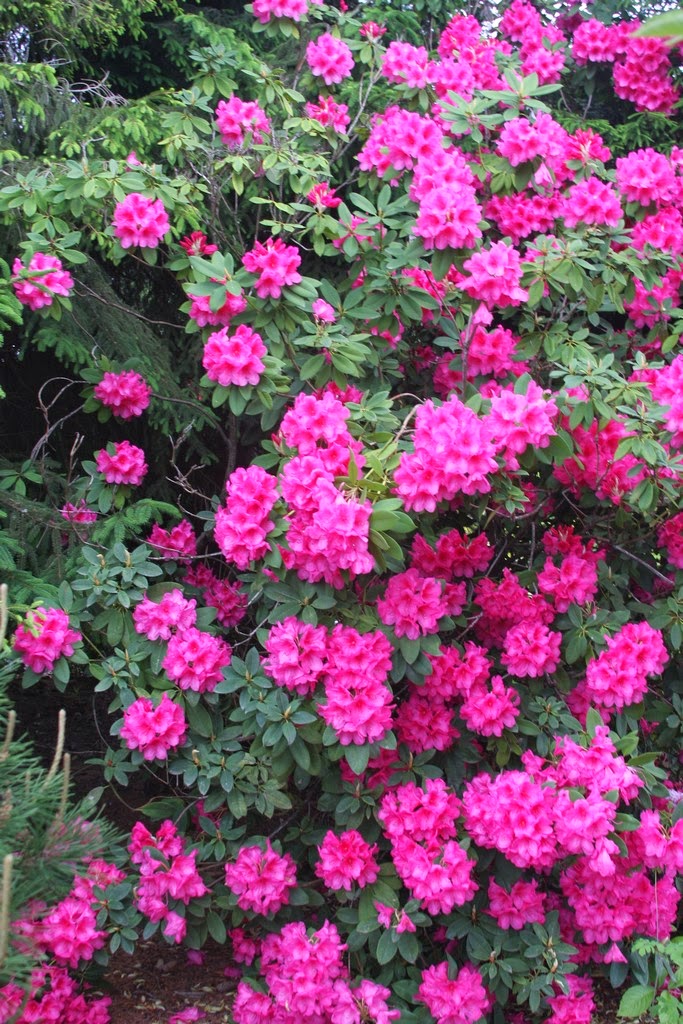 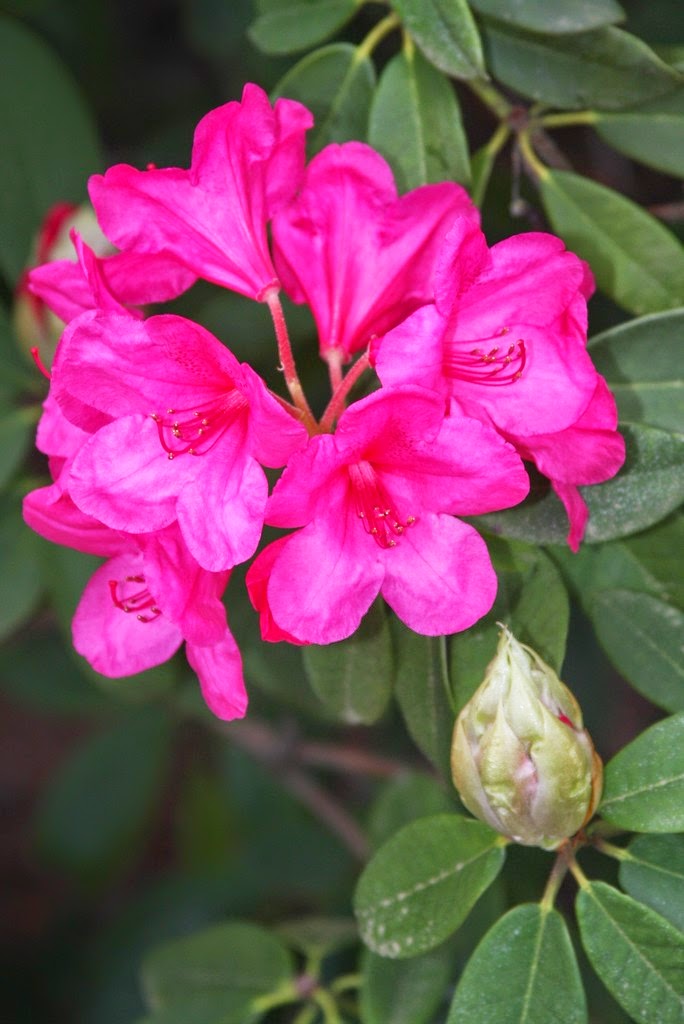 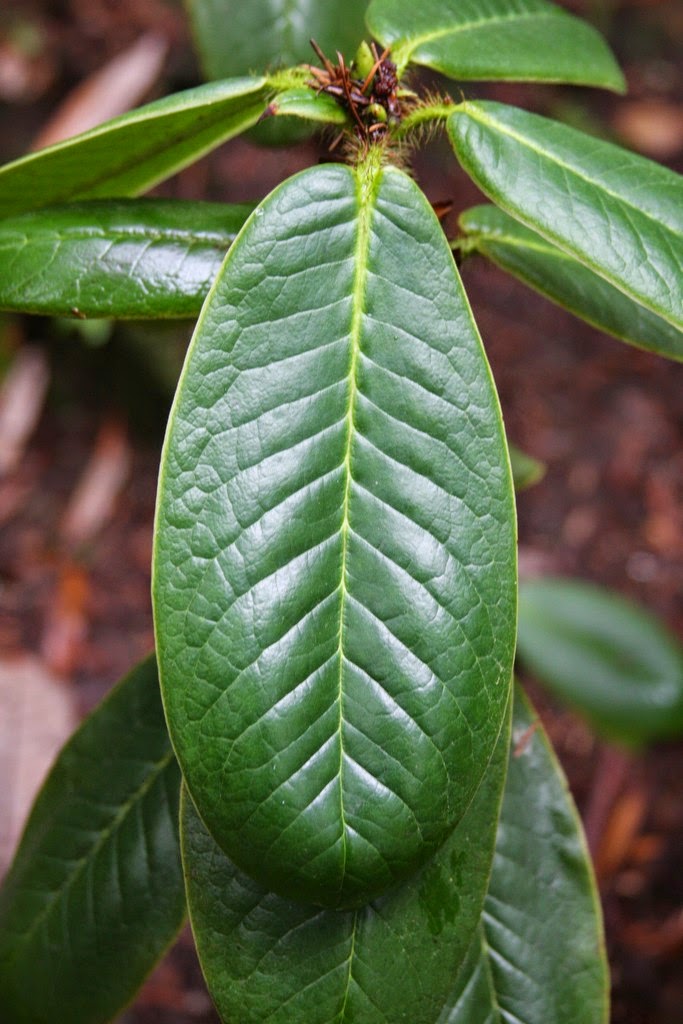 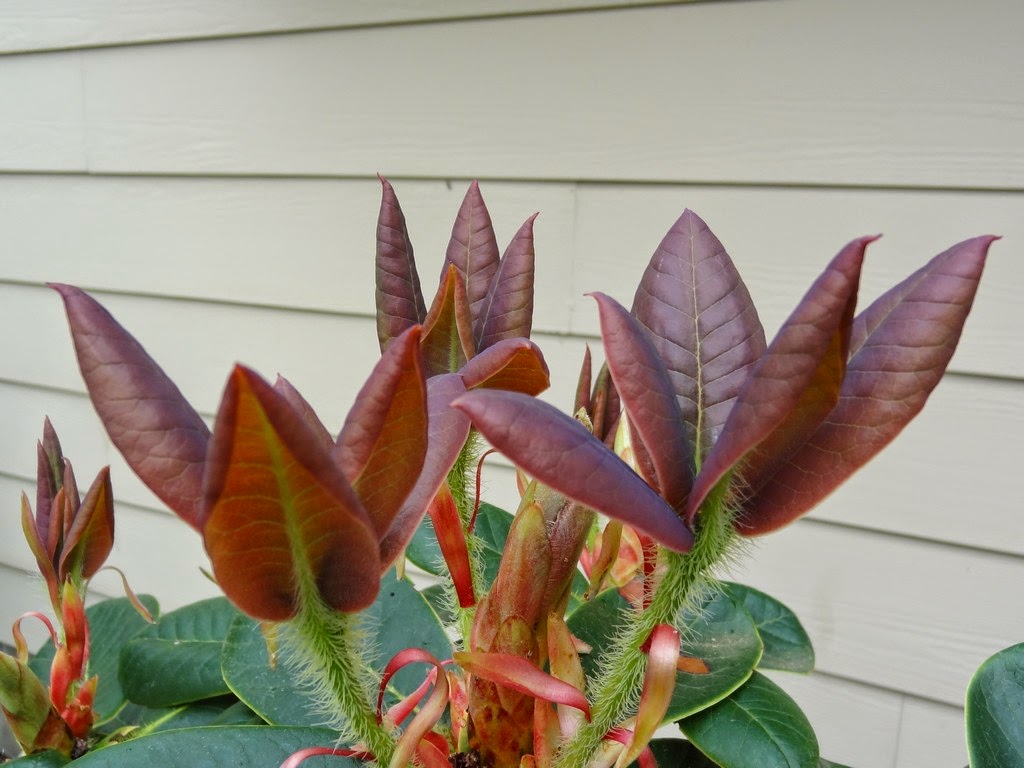 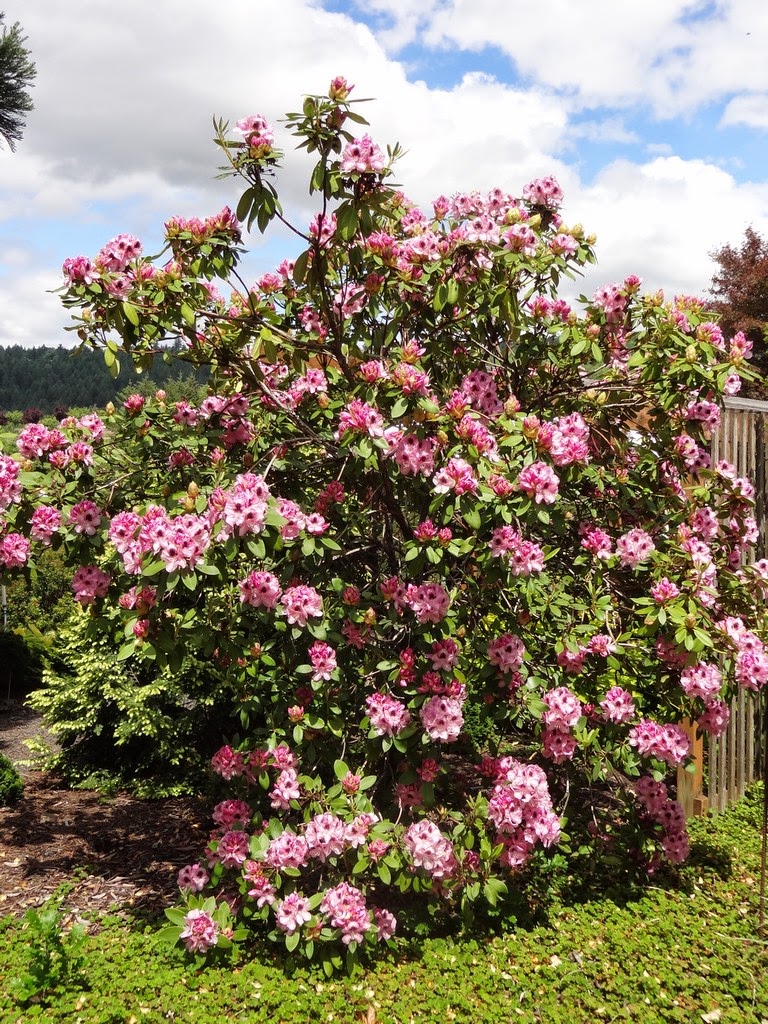 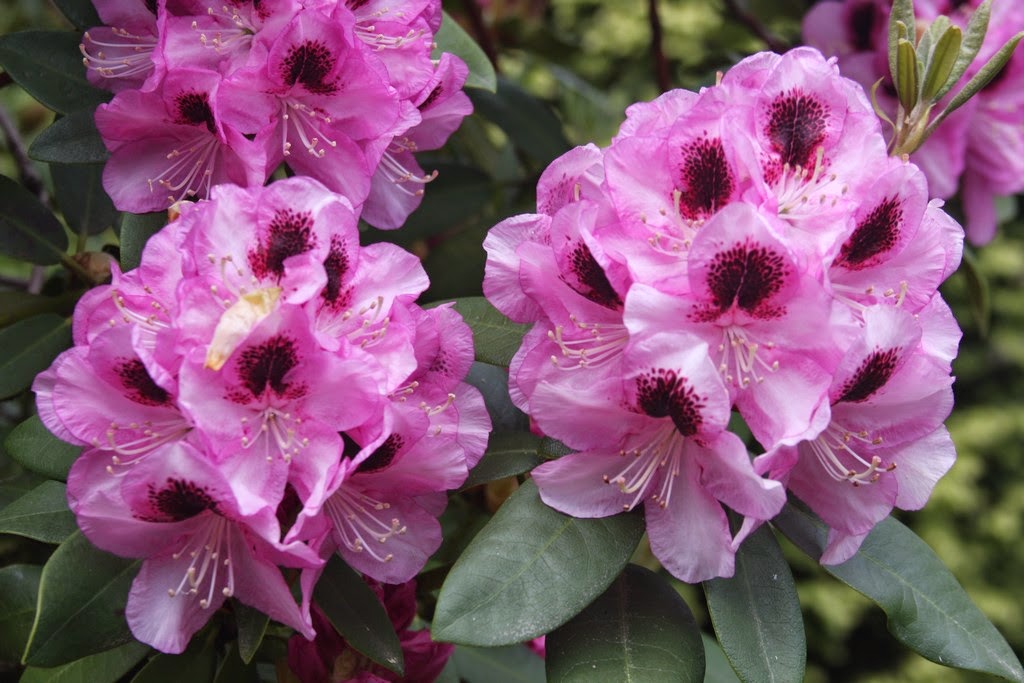 In the case of Rhododendrons (from Greek for "Rose Tree") I like the names 'Taurus', 'Ocean Lakes', 'Ring of Fire', 'Scarlet Wonder' and 'Winsome'. I like 'Anna Rose Whitney', but simply 'Anna Rose' would have been better. The species name for R. exasperatum is interesting, and was presumably due to the confusion various experts had over its classification. Names like 'Blue Tit', 'Titness Park' and 'Blue Peter' I find amusing, but I have been accused of having a juvenile sense of humor. Rhododendron names like 'Teddy Bear' are just too cheesy for me, they are un-bearable. And to name cultivars to honor people is a bad habit that should discontinue, no matter how illustrious the honoree may be. Some poor examples are 'Faggetter's Favorite', 'F.C. Puddle', 'Creeping Jenny', 'Mrs. W.C. Slocock', 'General Sir John du Cane' and 'Marchioness of Lansdowne'. A good name is 'Christmas Cheer', except that it doesn't bloom on December 25th.


It's typical to bestow goofy names on rose cultivars, but maybe the buyers respond favorably to them. Who wouldn't want to purchase a 'Betty Boop' or a 'Perfect Moment'? Rosa noisetliana 'Darlow's Enigma' sounds mysterious, but I don't know what the enigma is about with this particular shrub. I like the names 'Petite Pink', 'Rio Samba' and 'Dreamcoat', but I can't quite decide with 'Lawrence of Arabia'. 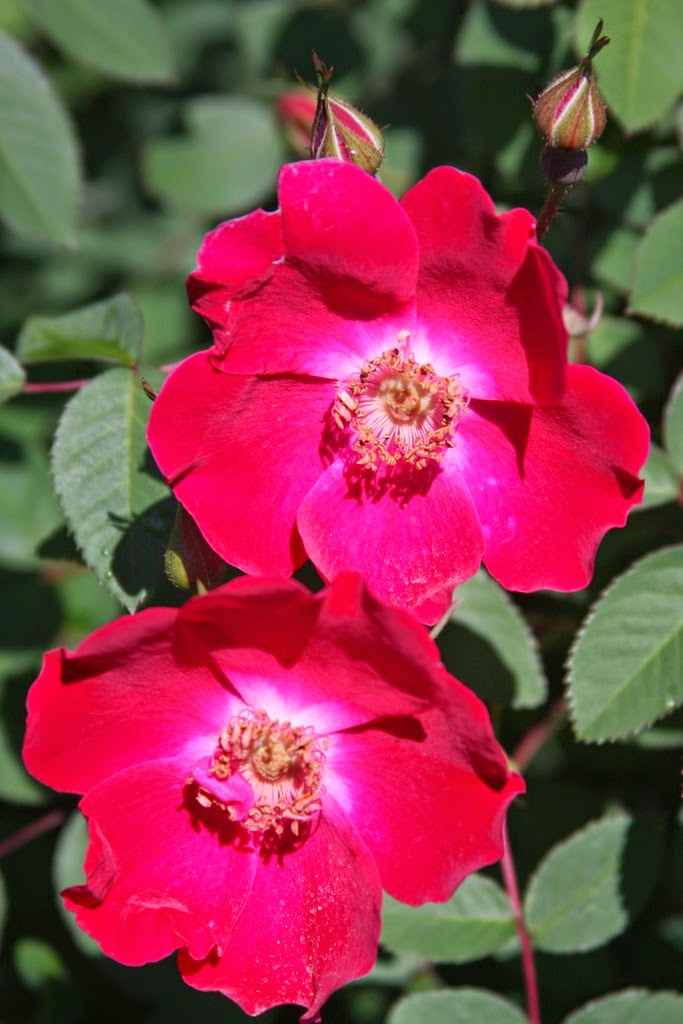 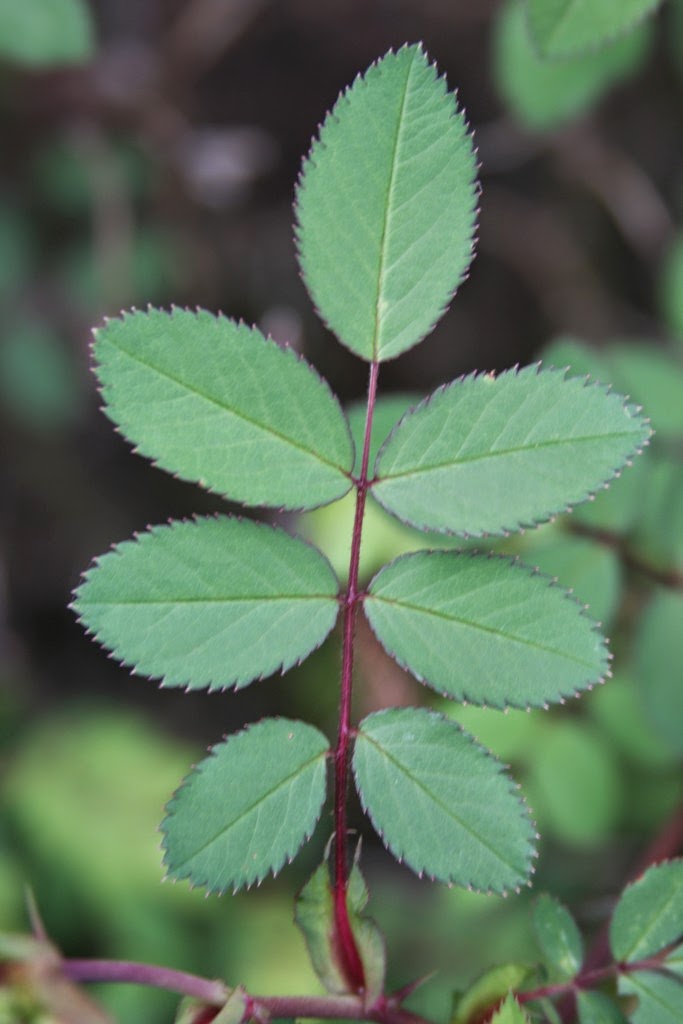 One of my favorite roses is Rosa moyesii 'Regalia', a vigorous shrub loaded with deep-red blossoms that occur for a couple of months. Regalia is from Latin regalis for "royal powers" or "royal privileges," as regal is from Latin rex or reg for "king." It is easy to associate "royal" or "kingly" with the deep-red blossom color, and I'm tempted to go English with colour. 'Regalia' is a great plant with a great name!

Rosa moyesii is native to western 'China', and was introduced into cultivation by A.E. Pratt in 1894 and again by E.H. Wilson in 1903. The species was named in honor of the Reverend J. Moyes who joined the Chinese Inland Mission, a Protestant organization whose members wore Chinese dress and adopted pig-tails to impress the locals who were undergoing the conversion attempt. Wilson had been hosted for a time by the good Reverend, and a plant hunter in China one hundred years ago appreciated any help he could get. Of course R. moyesii received the coveted Award of Garden Merit, in 1925.

As with the Rosa genus, the peonies, or properly Paeonia, abound with some terrific names, but with many that are not. But first, the generic name referred to the Kingdom of the Paeonians, a place that existed somewhere in the land of Thrace, a land of modern Greece and Bulgaria. The name comes from the Thracians, an ancient Indo-European people inhabiting southeast Europe. The largest portion of Thrace is in present day Bulgaria, and in Turkey it is known as Rumelia. I ventured into this general area in the 1970's, alone and by car, when I was single. I was impressed by the large number of women who were hitchhiking, and I stopped for them all, but unfortunately most were travelling in pairs and were lesbians, and my desires went unfulfilled. 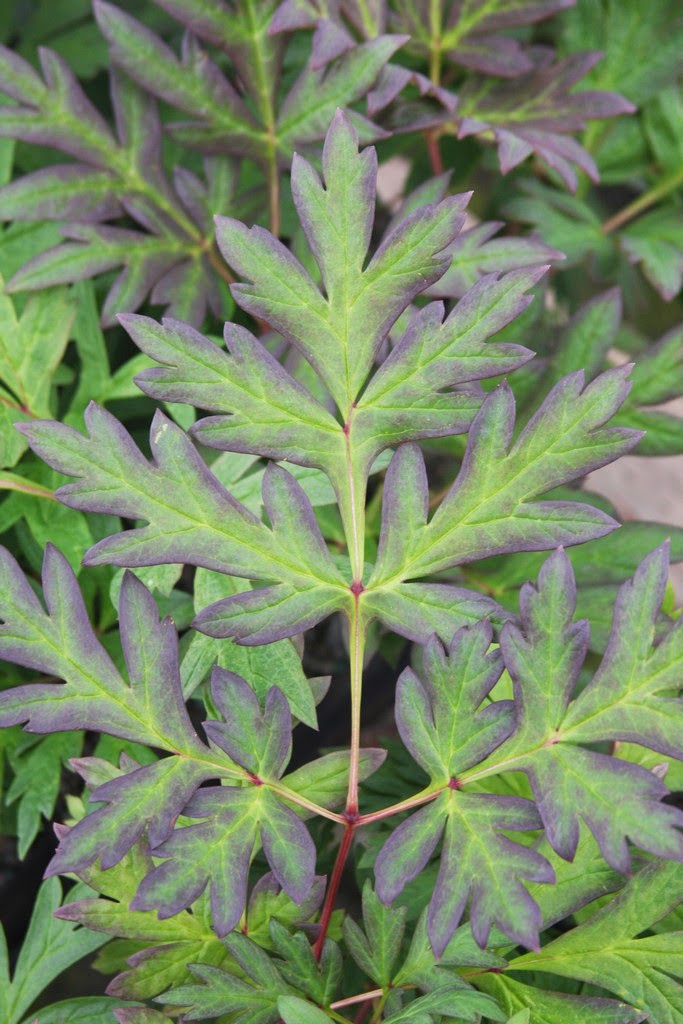 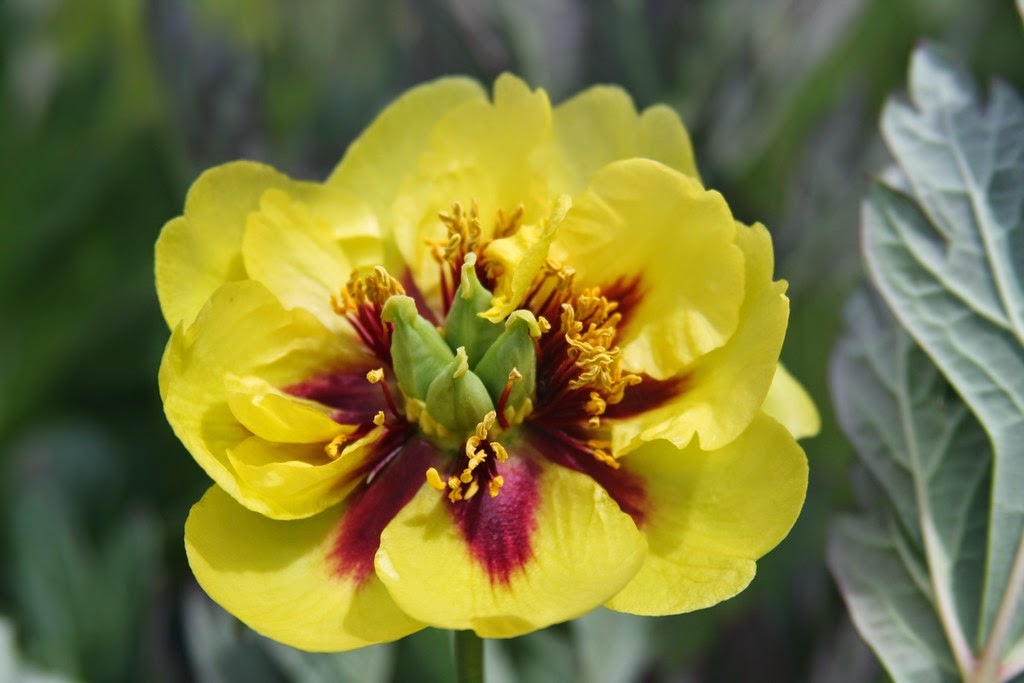 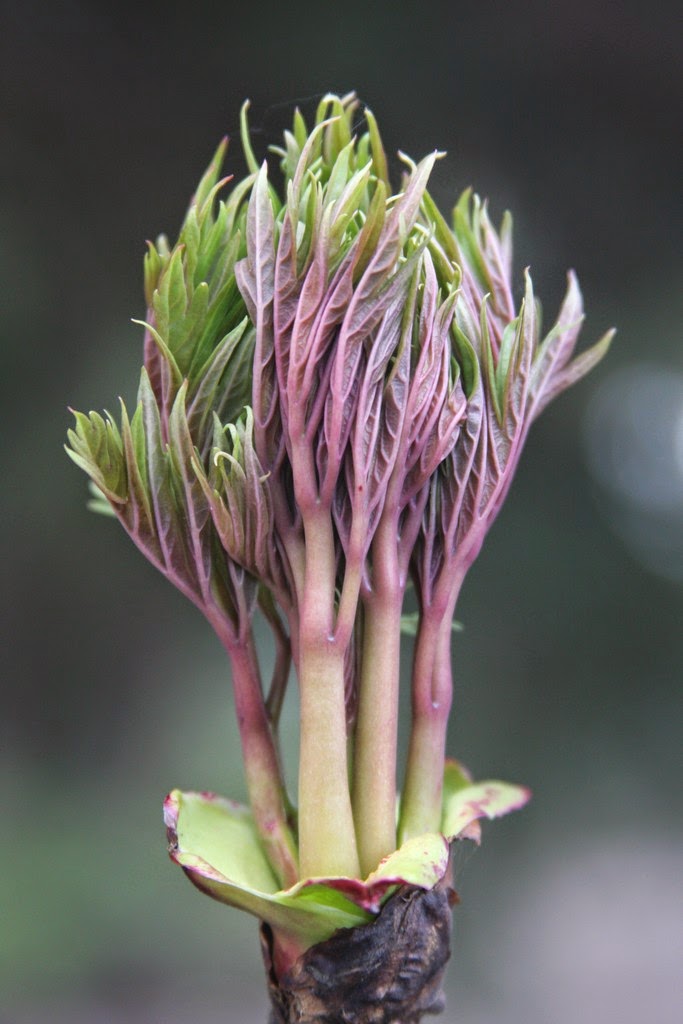 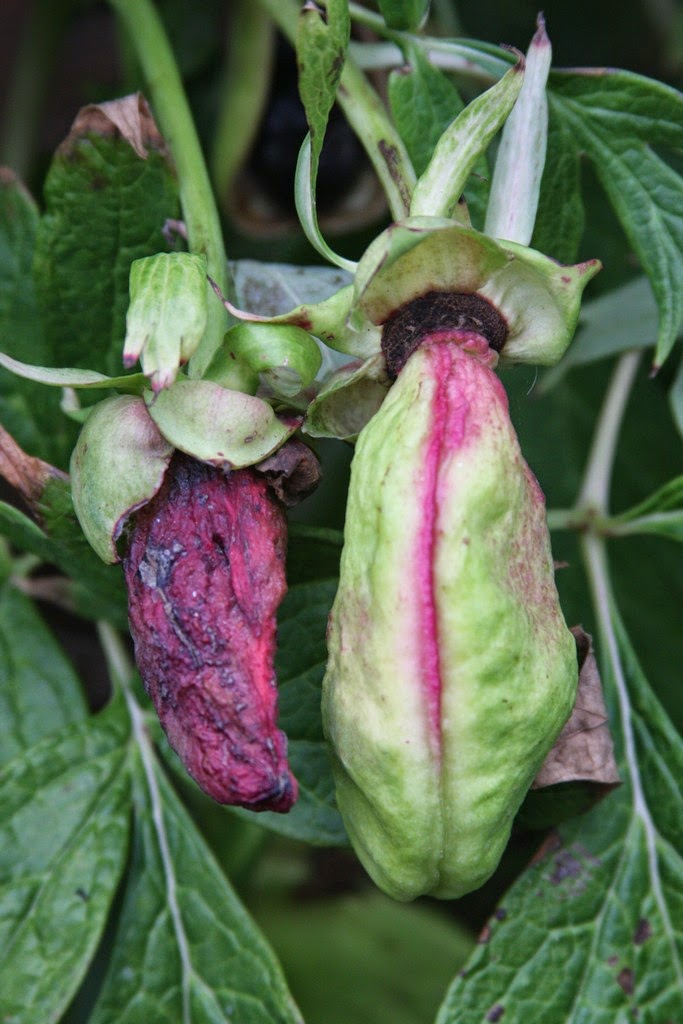 Back to peonies, the name origin of Paeonia japonica is self-explanatory, and so is Paeonia lutea with its yellow flowers. Paeonia lutea var. ludlowii is more vigorous and larger than just the lutea species. Its name honors Englishman Frank Ludlow, a Himalayan plant-hunter, and ornithologist. In Tibet Ludlow met a perfect companion in George Sherriff, and they spent years together collecting primulas, rhododendrons and more. They were considered very discriminating – not to the locals though – and selected improved forms of what had already been discovered, as well as their own discoveries. Interestingly, Ludlow studied botany under Professor Marshal Ward, the father of plant-hunter Frank Kingdon-Ward.

Paeonia mlokosewitschii is so impossible to pronounce and to remember how to spell, that most gardeners just call it "Molly the Witch." Molly was discovered by a Russian forester – maybe he was Polish – in the eastern and central Caucasus area around 1897. New growth is a wine-red color and the scented flowers are a light lemon-yellow with a center full of yellow-orange stamens. My one specimen is planted in considerable shade and it does quite well, but I have seen it in other gardens in full sun. Apparently old Mlo. never married, as no woman wanted to take on his surname. 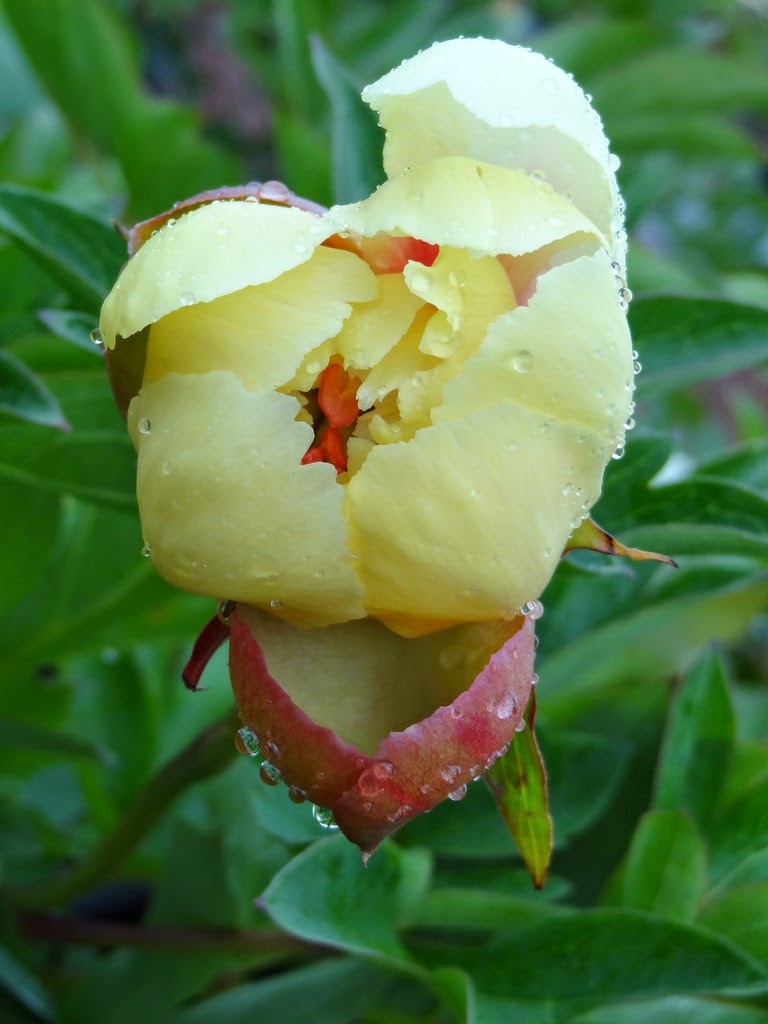 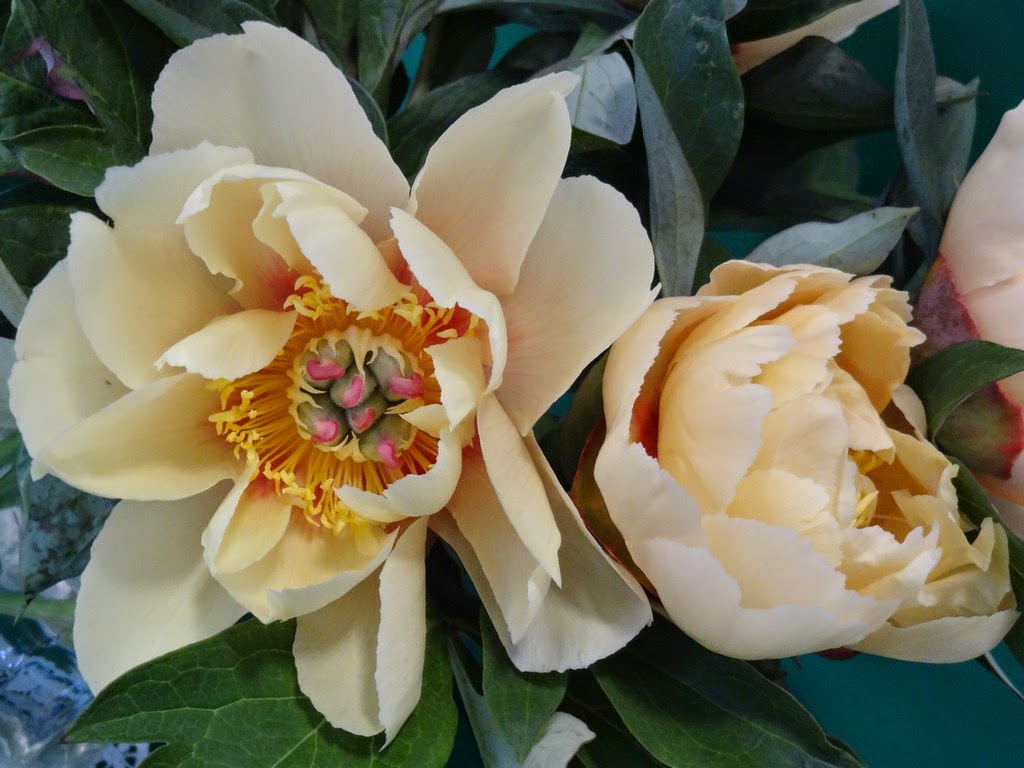 Most peonies in the trade are hybrids, and I've compiled a list of those whose names I approve, and those that I do not:

I'm not expecting you to agree with my subjective opinion, and certainly the world would be very dull if all of you dummies agreed completely with me.

The last entry on the "approved" side is Paeonia 'Sato nishiki', a selection with variegated foliage that I saw ten years ago in an unusual Japanese plantsman's collection, unusual meaning that every plant – every last one of them – was variegated. Who would want such a garden? In sum, it was way too much of a good thing, like eating pickles every breakfast, lunch, dinner and for a bed-time snack. The smug garden owner was not in the nursery business per se, but he was willing to sell his variegated Paeonia to a high bidder, and I think the asking price was $50,000, and that's a wheelbarrow full of yen. I don't know if it ever sold, but eventually he tired of his variegated collection and got rid of it all. I admire anyone going "cold turkey" over any obsession.

My favorite peony has to be P. rockii, sometimes known as P. suffruticosa ssp. rockii, named after the quirky plant explorer Joseph Rock. It is a woody "tree peony" native to the mountains of Gansu Province, China, and it is unofficially considered the national flower of China. Joseph Francis Charles Rock was an Austrian-American (1884-1962) explorer, geographer, botanist and linguist. He roamed in Yunnan, China...where I followed in his footsteps some sixty or seventy years later. When I say that Rock was "quirky," he was certainly fastidious in his civilized habits, for he always travelled with a complete set of silverware and an Abercrombie and Fitch canvas bathtub, filled nightly by his servants with hot water. No one ever attended to me in such a manner when I was plant-hunting in Yunnan, China in the 1980's. Rock's peony is beautifully white in flower with a maroon-purple base, and features creamy-yellow stamens. Wow! Also attractive are the dark-green leaves which are bluish beneath. P. rockii is not common in cultivation because the seed can take three years to germinate. 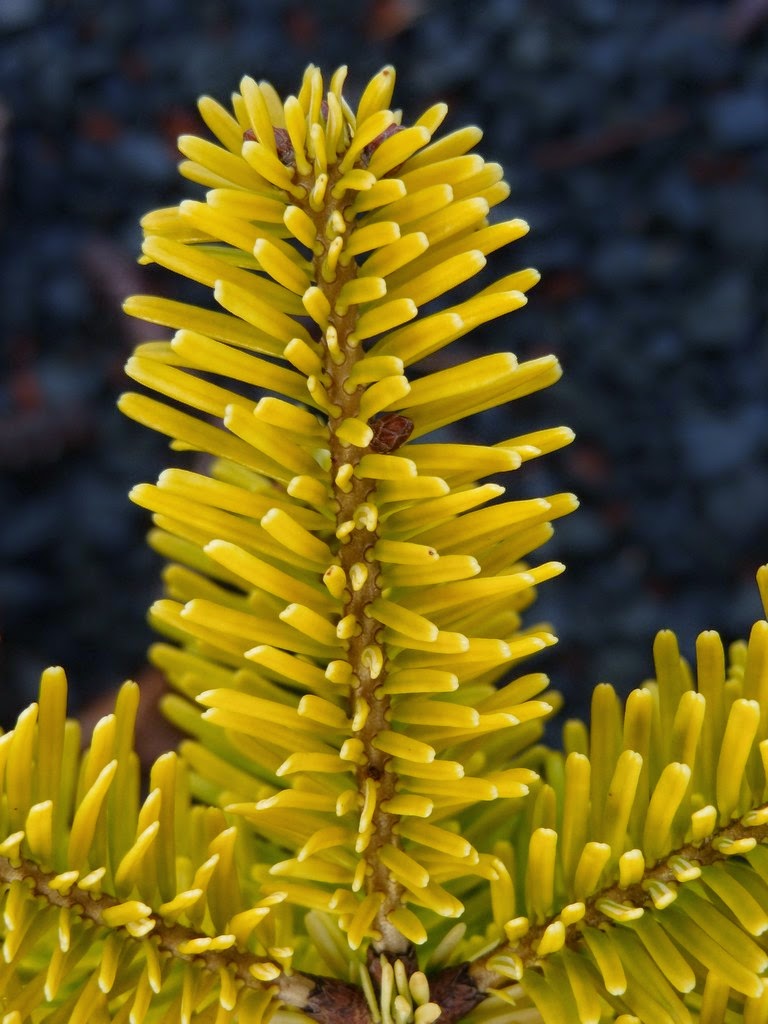 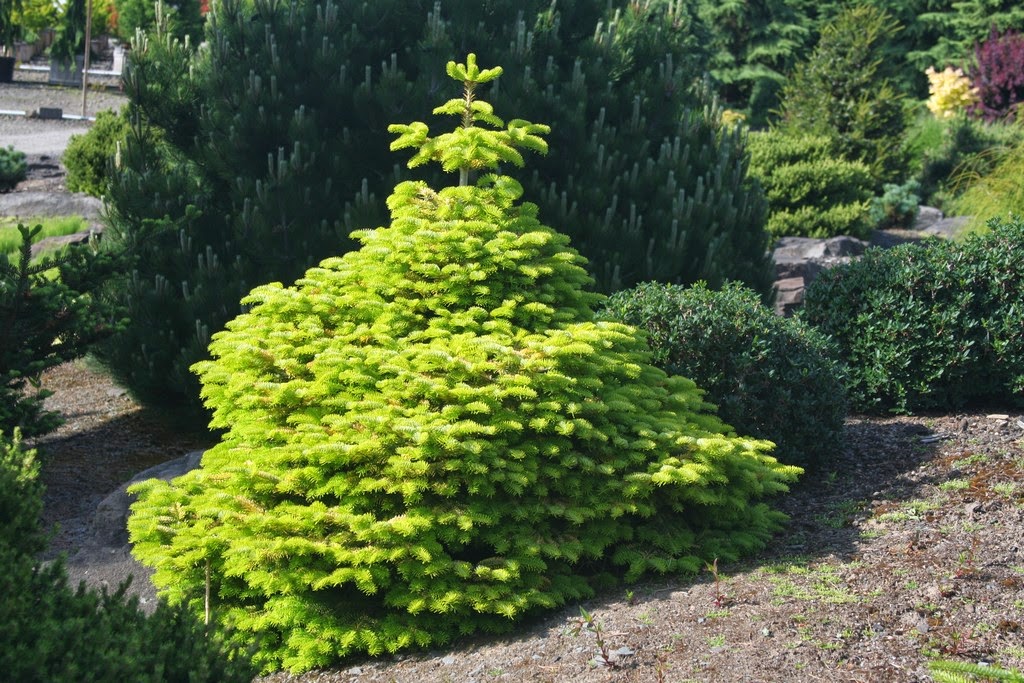 The conifers are represented with some choice names, such as Abies koreana 'Blue Emperor' and 'Blue Magic'. I think both are European introductions, but I thank the discoverers to use catchy English names. Abies koreana 'Tundra' also sounds nice – and it's a worthy selection – but I don't see how the dwarf spreading conifer was so named. Two other "Korean Firs" were selected for their coning characteristics. 'Gait' is a slow-growing upright that can produce a prodigious amount of small cones, even on a young tree. If you didn't know that, the cultivar name wouldn't be very helpful. Another example is 'Vengels', a selection with very narrow cones with lots of spiraling bracts, but not a name that helps with sales. Abies nordmanniana 'Golden Spreader' is a decent name, not good and not bad; well, not bad until it begins to assume a conical form. 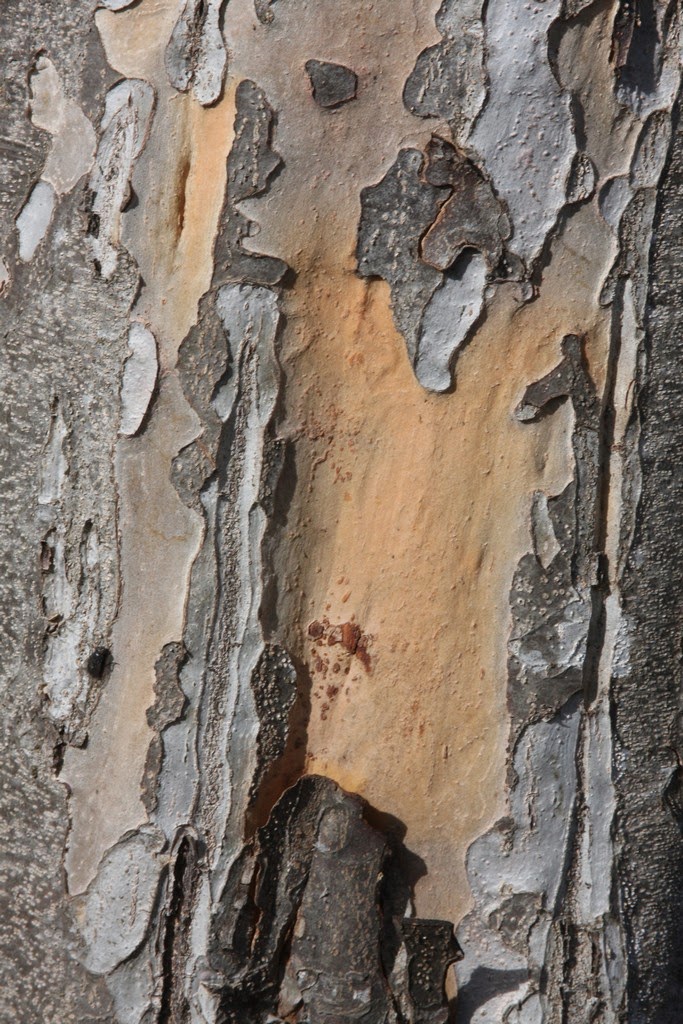 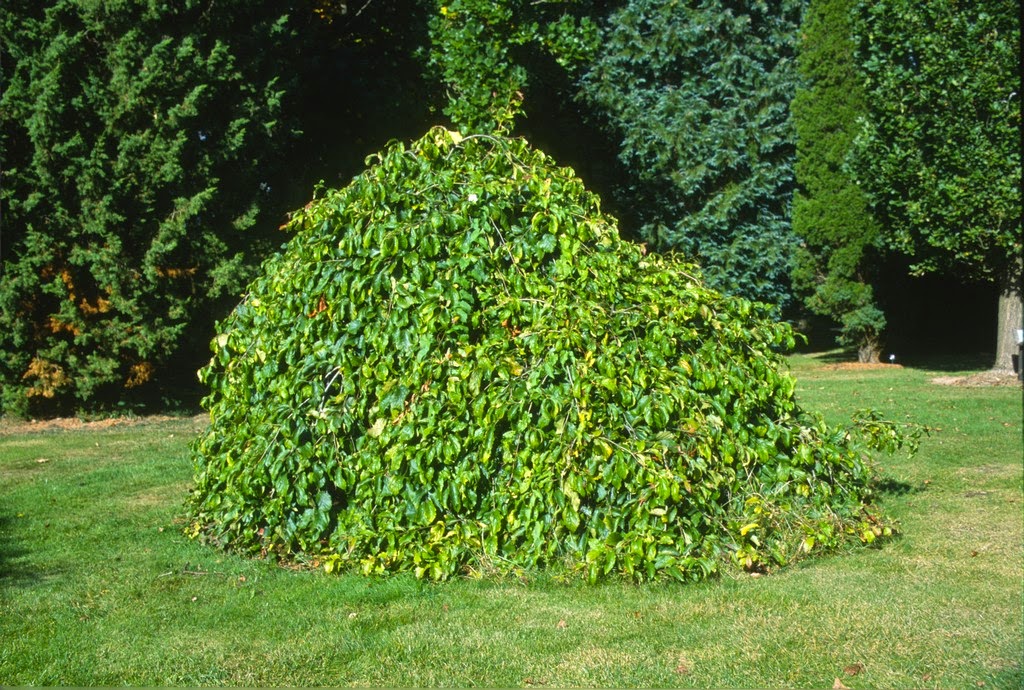 
Parrotia persica 'Pendula' is the old-fashioned Latin name for the "Weeping Ironwood," and of course we're not allowed to use a Latin word for a cultivar anymore. Parrotia was named for the German naturalist Friedrich Parrot, and the species name persica was assigned since it is endemic to northern Iran, once known as Persia. The ironwood cultivar 'Vanessa' is a nice-sounding name, but it doesn't lead you to know that it is a fastigiate form. 'Persian Spire' is a far better plant than 'Vanessa', and also a far more catchy name. 'Persian Spire' is new, and patented, but what's an extra dollar for a great tree? The dumbest Parrotia cultivar name is 'Select', and that one was coined by me. Parrotia persica was rare and sought after when I began my career, and I entered the fray by growing them from seed. 'Select' was a noticeable seedling for having a deeper-purple leaf margin than the type. With a label I marked it "select," and later we propagated rooted cuttings from that one tree. Eventually plants were sold and so the name stuck. In my defense...well, I don't have one, but anyway it's ancient history now.

...So good names, decent names and bad names, I've done them all. But these days I have appointed myself as judge of all plants names, and before anything can be propagated or patented it is required to receive my Stamp of Approval, and horticulture will be the better for it.

Posted by Talon Buchholz at 8:43 AM