This past October the Maple Society's annual conference featured garden tours, one being to the Rhododendron Species Garden in Federal Way, Washington. I missed that tour due to our departing Brazilian trainee, as I anticipated a final hug from the sweetheart...which she delivered. I've been to this wonderful species garden a half dozen times already, but I couldn't pass up another visit the following week with companion R. Hatch. Our primary caper would include two Seattle art museums, and then since the day was pleasant and sunny, a stop at the "plant museum."

But first, before one pays up and enters the Rhododendron wonderland, there is the no-charge Pacific Rim Bonsai Exhibit. The bonsai pieces are displayed in excellent fashion in a courtyard-like setting. The plants were a mixture of deciduous trees and conifers, all atop simple, elegant platforms with bottom heat.

My grandmother was an avid gardener, but she only raised food; life in the lean years of the Great Depression made a lasting impact on my father's mother, although she did have a lilac and a hydrangea next to the house (of course). Anyway, one day we were talking about my nursery and the subject of bonsai came up. Grandma said "I do not care for bonsai--there's something wrong with it--it's like crippling children."

Well, I don't agree with that, and I find the Pacific Rim's collection to be fantastic, for it presents a familiar tree in a new manner. Take Sequoia sempervirens, for example: the tallest tree on earth can be reduced into a miniature form, and can live indefinitely (maybe) in a little dish. I think the most stressful job in the world would be curating these treasures.

Another normally huge tree is the common "Blue Atlas Cedar," Cedrus atlantica 'Glauca'. The Rim's was layered into blue cloud-like formations. Another, a golden form of the species tumbled down from its pot with the utmost of grace.

An ancient-looking "hinoki," Chamaecyparis obtusa, was shaped like the blue Atlas, and neither of these two trees had a spec of older shedding foliage; they both looked vibrant, almost imaginary.

Of course there were pines; a couple of parvifloras were to die for. Their bonsai regimen resulted in needles one-third size of the normal species, and again, there was not one brown needle to be seen. At the nursery we're in the middle of autumn needle shedding, a normal occurrence, but still a rough season for pines. 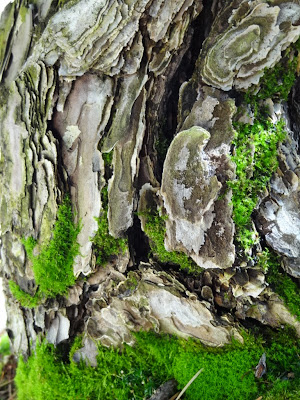 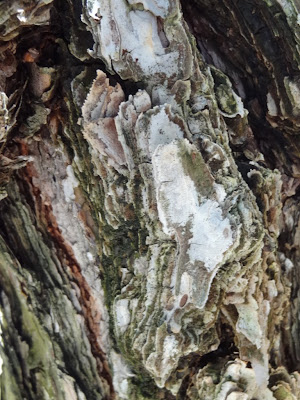 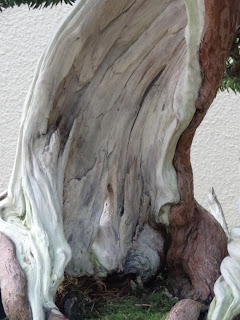 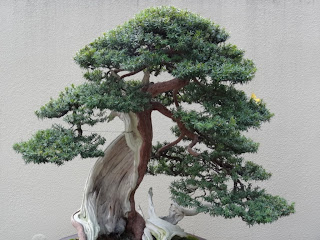 A pinus densiflora was unusually lush and well-kept, but my favorite pine was the thunbergii species with its colorful plating bark. A Taxus cuspidata featured perhaps the best trunk of all the conifers. The species is known as the "Japanese Yew," and was introduced from Japan by Robert Fortune in 1855. Remember Mr. Fortune as the thief and spy who snuck into China (working for the British East India Company) and swiped tea plants (Camelia sinensis) to develop an industry in India and other Empire locations.


Juniperus chinensis, the "Chinese Juniper," was represented in a couple of the creations, and one had a trunk which seemed to be a thousand years old. Juniperus chinensis has innumerable garden cultivars--and I hate most of them for having slung truckloads of the cheap stinking things from Oregon back to the east coast. 'San Jose' was one such cultivar. Juniperus chinensis var. sargentii is also known as Juniperus sargentii, a spreading shrub native to Japan and more-northern locales, and was introduced in 1892 by the legendary Professor Sargent, the first Director of the Arnold Arboretum. 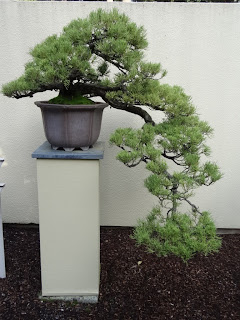 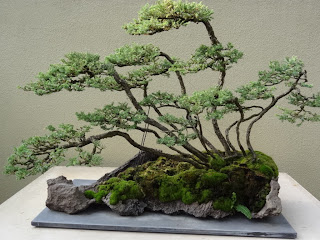 Two examples of Juniperus horizontalis were made to look very different, and were not as ground-hugging as the common name, "Creeping Juniper," would suggest. Juniperus occidentalis, the "Western Juniper," is a species from America's Pacific coast, from Washington to southern California, and into Idaho and Nevada. The Pacific Rim's specimen was very interesting with lush gray-blue foliage, and at first I wasn't sure just what coniferous genus I was looking at. A tremendous place to see this species is in Yosemite, where nature has created its own bonsai gardens.

A couple of Thuja occidentalis didn't do much for me, nor did a Taxodium distichum, although I did like the shadow of the latter in our afternoon sun. Better were a couple of "Hemlocks," Tsuga heterophylla, the "Western Hemlock," which is the state tree of Washington, and a Tsuga mertensiana, the "Mountain Hemlock," which featured an odd shape with its own shadow.

One final conifer was my favorite of the lot: Larix laricina, the "Tamarack," which is perhaps more splendid in bonsai form without its needles. Its shadow reminded me of a double rainbow, where you get two for the price of one. 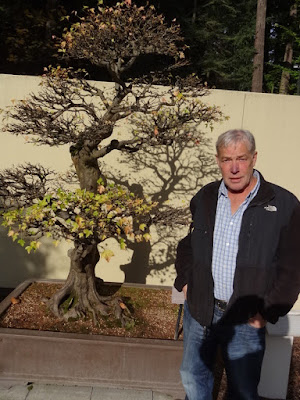 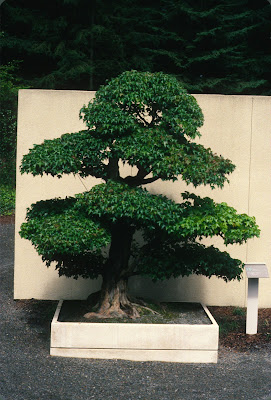 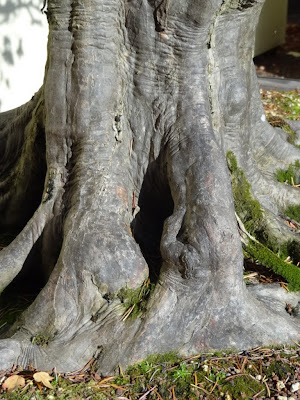 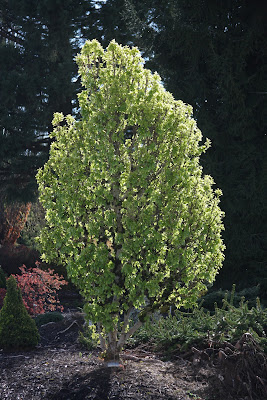 
Of course there were bonsai maples, and I have been friends with one particular old "Trident" for many years. This is the cultivar Acer buergerianum 'Miyasama yatsubusa', and without leaves the trunk showed all the better with steel blue-gray bark glowing in the warm light. Likewise a palmatum grove and a defoliated laceleaf were better without leaves.

A couple of "Hornbeams," with tiny defoliating leaves and strong trunks, were both Carpinus turczaninovii, a shrubby tree from Korea and northern China. Until I got home to look up the species, I supposed that turczaninovii was native to Turkey, but not so. I should love to see these specimens in spring, for they are known for emerging leaves in bright red color.

Celtis, a genus allied to the elms, are known as "Nettle Trees" or "Hackberries," and the species sinensis is of course from China, but also from Korea and Japan. Elaeagnus pungens is also from Japan, and is known for shiny green leaves and fragrant flowers in autumn, although we were too late for the bloom this year.

Olea europaea is the "Olive," which can resist winter frosts on its luxurious heated pedestal. Again, we were too late for the small white flowers in late summer. Olives have been cultivated for a few thousand years and olive oil is extracted from the fruits. I once read an interesting story about a special European garden in search of the oldest olive tree on earth, and the cost of finding and transplanting this tree would not be prohibitive. Seeing this bonsai tree in the Pacific Rim exhibit gives one an idea of what a 2,500-year-old olive tree might look like. 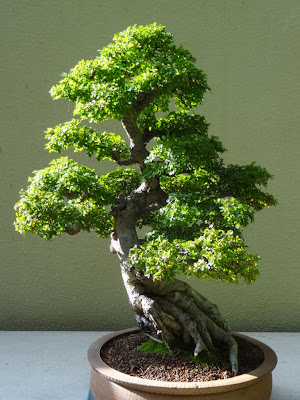 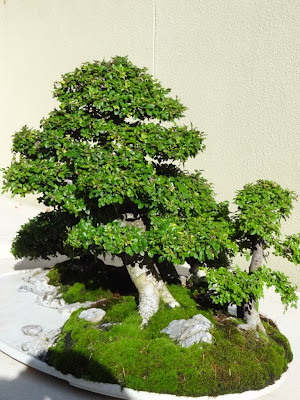 You can't have a bonsai collection without the "Elms," especially the parvifolia species from China, Korea and Japan. Tiny rich-green leaves and a shrubby form make a perfect canvas for a bonsai artist. A parvifolia with the cultivar name 'Catlin' was new to me, but then I'm not a seller of elms. A "Firethorn," Pyracantha angustifolia, displayed luscious red berries which can last throughout winter. The genus is vicious for its thorns, and I've always felt that Pyracantha was best sited in someone else's garden.

One final deciduous tree, also common to bonsai, is the "Oriental Beech," Fagus crenata from Japan. In nature it achieves a large size, and is similar to the "European Beech," Fagus sylvatica. Other than as a bonsai subject, I have never seen the crenata species planted in American gardens. I don't know the significance of the cultivar name 'Fuji', as with the Pacific Rim's specimen, other than maybe it was shaped to resemble Mt. Fuji.

Ok, enough of the "crippled" creatures, let's move into the lush woodland garden with its famous Rhododendron species. It's notable that the word "species" is prominent in this garden's name, because most Rhododendron hybrids and cultivars are shunned. It is the belief that the hundreds (850) of the world's species are individually fascinating and attractive enough, so that the gaudy cultivars can find a home in gaudy gardens. With a few exceptions, I would tend to agree.


Near the main entrance is a low spreading mat with tiny leaves, Rhododendron keiskei 'Yaku Fairy'. I have one myself, thanks to companion Hatch, and my specimen is over 4' wide, by about 10" tall. This miniature creeping plant was found by plantsman Wada on Yakushima Island in the sixties. It is smothered by tiny cream-yellow flowers in spring, while today the leaves are a coppery green. 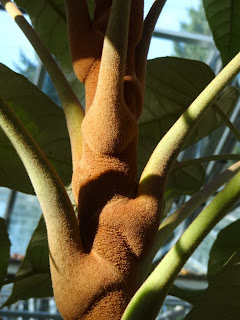 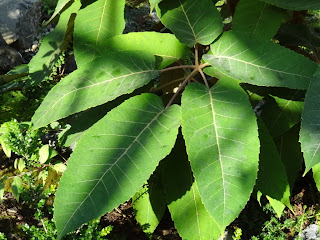 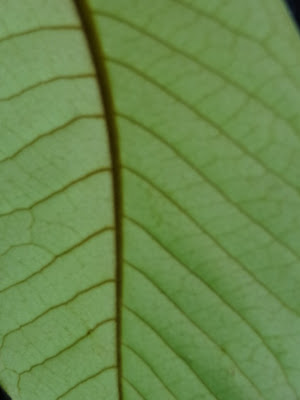 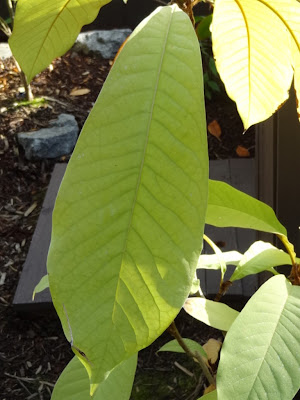 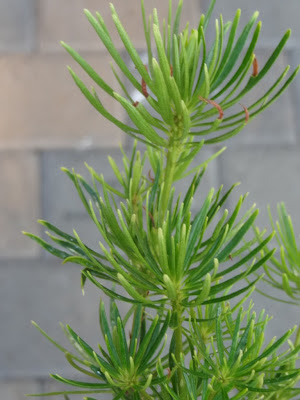 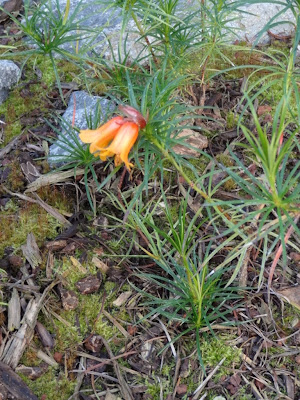 We were anxious to experience the newly-constructed conservatory. What a wonderful place for the less hardy Rhododendrons and other companion plants. Since my photos have been filed in alphabetical order I can't be positive what I saw inside, from those I saw outside. But inside a Schefflera macrophylla sported large green leaves and a fuzzy cinnamon-colored stem. Equally impressive were the huge leaves of Michelia (a Magnolia relative) megaphylla. A Rhododendron, new to me, was the delightful taxifolium. The foliage resembled a conifer, or perhaps a Rosmarinus. Small flowers were orange-red in color.

Other Rhododendrons, whether from inside or outside, included three species with Acer griseum-like bark: Rhododendron flueryi, Rhododendron sinonuttallii and Rhododendron walongense. The leaves on all three were handsome, and since you have year-around interest in the bark, who cares whether or not the flowers amount to anything. I learned that Rhododendron hookeri was not named for the Himalayan plant explorer Sir Joseph Hooker, but rather for the underside of the leaves with "conspicuous tufts of hooked hairs, a character possessed by no other known species." (Hillier). Others (Hatch) dispute this claim, and I must admit that my Hillier's Manual of Trees and Shrubs is over twenty years old. 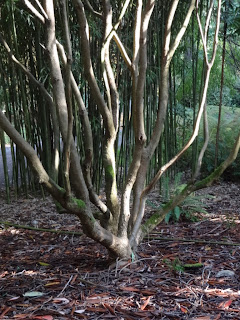 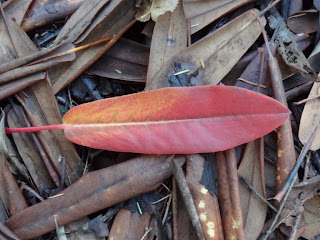 There was a large forest of limbed up Rhododendron fortunei ssp. discolor and a grouping of small Rhododendron yuefengense. The latter is a Chinese species with round green leaves and pale pink flowers; the plant is attractive but it is doubtful you'll ever find it at your local garden center. 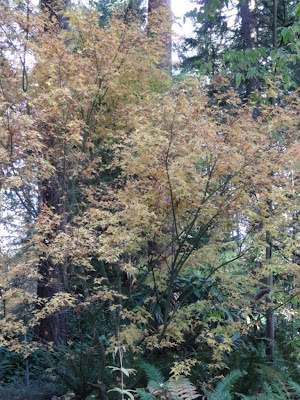 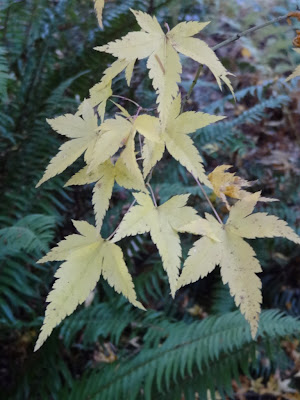 A number of trees provided shade for the Rhododendrons, including the obligatory Acer griseum. A rangy old Acer palmatum 'Shino buga oka' displayed green linearlobum leaves that were turning golden. This cultivar is spelled elsewhere as 'Shinobu ga oka' (Yano), but in any case it is similar to 'Ao shime no uchi'. Acer palmatum 'Wabito' was a large brushy shrub, but it was in golden fall color and looked nice. 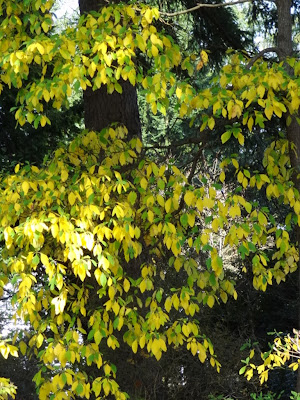 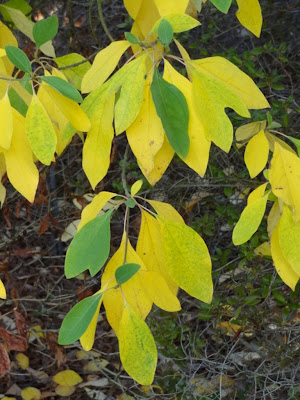 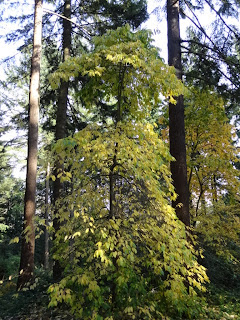 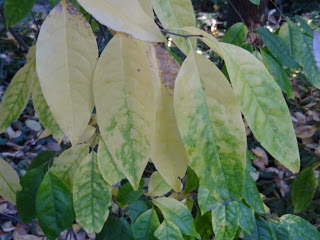 Sassafras albidum and Parrotia persica were also displaying good fall color, while an Arbutus menziesii, the "Madrone Tree," had attractive exfoliating bark. Oxydendrum arboreum, the "Sorrel Tree," thrives in the same conditions as Rhododendrons, and was now turning fantastic yellow.

Closer to the ground was Shortia galacifolia, known as the "Oconee Bells," and it is a rare plant from the southern Appalachians. I grew it once, but a renegade ex-employee sprayed it out because "it just looked like a weed," in spite of its plant label. This knucklehead "simplified" my landscapes on other occasions as well, and he was eventually simplified himself. 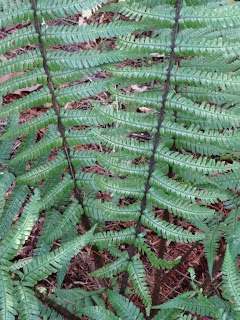 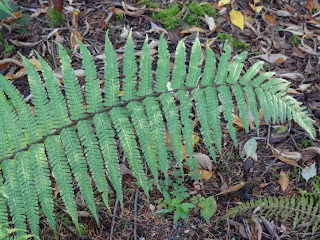 I'll mention three final plants which all thrive in woodland gardens: Enkianthus 'Ivory Chalice', Dryopteris wallichiana (a hardy fern) and one of my favorite of all plants, Cardiocrinum giganteum. the "Giant Himalayan Lily." Of course all flowers of the Cardiocrinum were long gone, but the seed pods can rise to 12-15' tall and are ornamental throughout the fall and winter. We've had a dried stalk in our bathroom for years, accompanied by our "Watermelon Man."

So it turned out to be an excellent day, and probably everybody back at work was thankful that I didn't show up at all.
Posted by Talon Buchholz at 1:43 PM