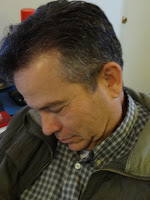 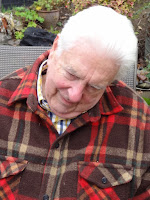 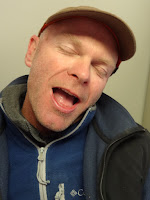 A unanimous response to Buchholz's speech

Our first stop was the Bellevue Botanic Garden, a twenty-year-old garden in a well-heeled suburb of Seattle. I have visited a half dozen times before, but always in spring and summer; in fact my previous visit was just two months prior. It is apparent that the garden does not suffer for funds, or perhaps that a lot of volunteers are generous with their time.

The Garden features an alpine rockery with an unlabeled dwarf maple, probably Acer palmatum 'Sharp's Pygmy'. The rocks and layout were nice, but the flora content has never been impressive. The perennial garden was past its prime, and one is better off to visit before October. Some conifers were attractive, such as Metasequoia glyptostroboides 'Gold Rush', but still they were more impressive earlier in the year. For some reason our guide led us into the woods, and I supposed that some from out of state enjoyed the walk. Fall color was beginning, especially on Acer circinatum and Acer macrophyllum, but I was more anxious to see cultivated plants. Overall the labeling was weak, which is frustrating when something unknown does interest you. 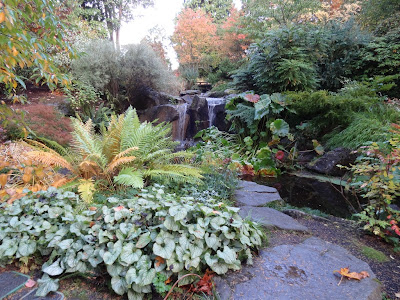 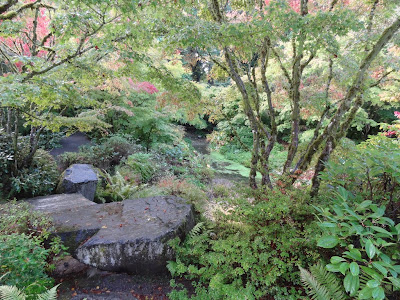 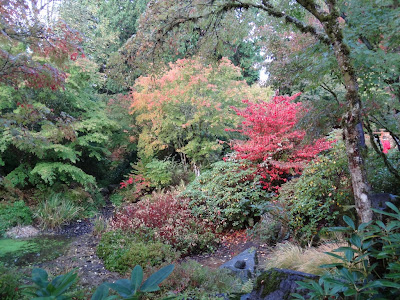 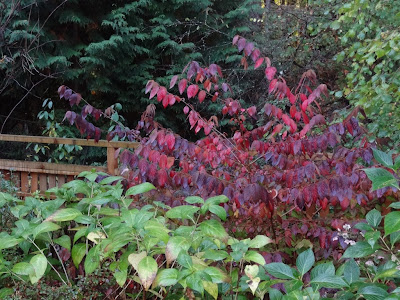 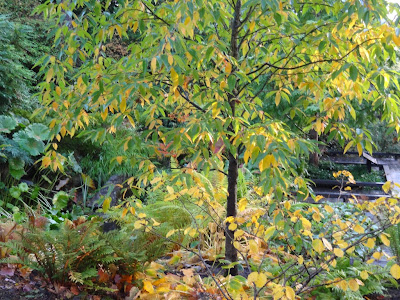 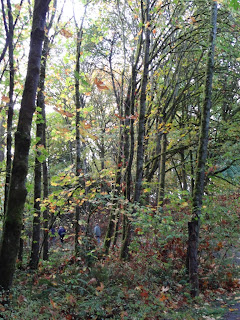 The woodland trail at the Bellevue Botanic Garden

Our next stop was a one-man maple retailer who operates on his medium-sized lot in Everett, Washington. Charlie Morgan's company, Amazing Maples, is only a part time pursuit, but nevertheless he sells twice as much of our product as our next two largest customers in Washington state. When the bus pulled up the short road to his driveway, everyone on board feasted on the fantastic fall color, with one passenger asking the obvious: "Gee, I wonder which house is his?"

The layout of Charlie's maple was very customer friendly, and all trees had obvious labels. But I can imagine the customers--ranging from novice gardeners to the connoisseurs of maples--being overwhelmed and somewhat paralyzed with so many choices. But Charlie loves to talk maples and he's obviously a very skilled salesman. 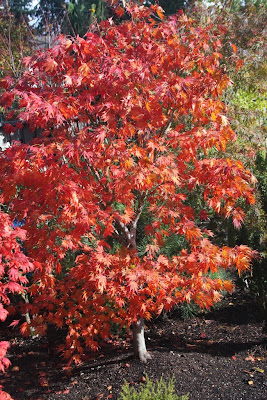 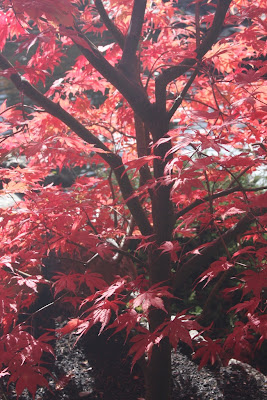 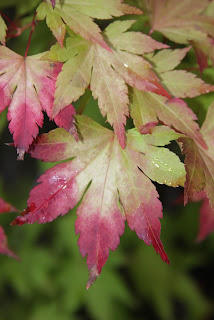 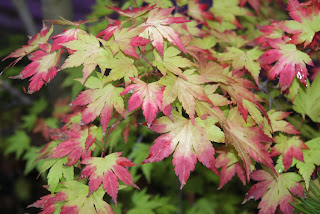 One thing amazing at Amazing Maples was that virtually every tree was showing prime fall color. At my nursery it doesn't come on all at once; in fact when I left for Seattle, less than 20% was in color. Even obscure cultivars were showing off, and their brilliance equaled many of the better known and popular. Who could resist Acer palmatum 'Killarney', for example, for I have never seen it so wonderful before. Acer palmatum 'Orange Dream' displayed a two-tone color that has never been duplicated at my nursery. On and on...we walked the paths, gawking at the maples from many perspectives.

Up against Charlie's house was one of the first Wollemia nobilis in America, and it bore female cones at that. I have collected one too, but mine is in a protected greenhouse because I'm dubious about its cold hardiness. Wollemia was the recently discovered conifer genus from the Wollemi National Park, fairly near Sydney, Australia. I encourage the reader to seek out The Wollemi Pine by James Woodford for the story of "the incredible discovery of a living fossil from the age of dinosaurs."

Another conifer of interest was Abies nordmanniana 'Pendula', with two and a half cones intact. The "Weeping Caucasian Fir" makes for a choice garden tree, and for me is far more desirable than any green weeping spruce. 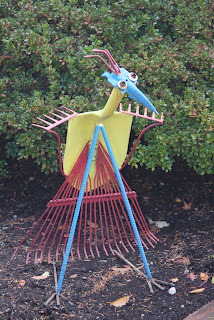 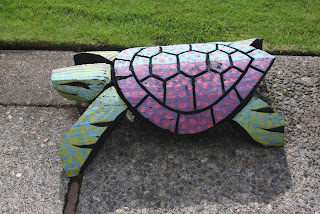 Whimsical stuff at the Morgan house

Our tour extended to the parents' house, and the garden entrance featured a powder blue "Mountain Hemlock," Tsuga mertensiana, which was apparently just a seedling selection. Maples were colorful here as well, but the star of the show was clearly Acer palmatum 'Fairy Hair'. Charlie had planted one of my largest in the past year, and the specimen drew wondrous praise from all visitors. Bill Gates from Microwave--or Microsoft, or something?--has seen this specimen and covets it, but Charlie smugly refuses to reveal his source. 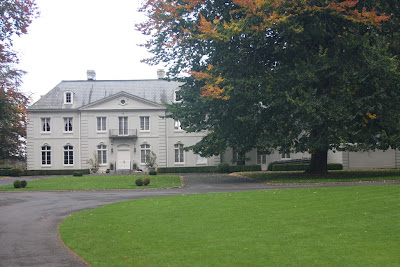 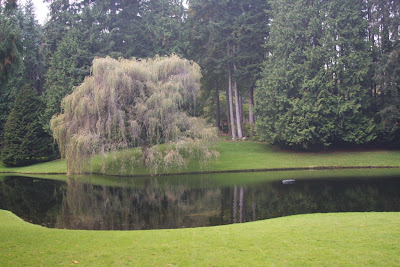 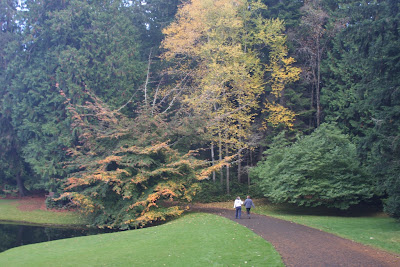 The Bloedels, Prentice and Virginia, made scads of money in the timber industry, back when forests seemed inexhaustible. At some point Prentice realized that there really was a finite number of trees on earth, and he led the industry's forest conservation efforts. The Bloedels acquired the Bainbridge Island property in 1951 and began to transform the wooded land into a botanical mixture of gardens, pools and lawns. Bloedel's vision was "to provide refreshment and tranquility in the presence of natural beauty," and the Reserve's mission is now to "enrich people's lives through a premier public garden of natural and designed Pacific Northwest landscapes." Hey, that's exactly what I would do if I were rich! 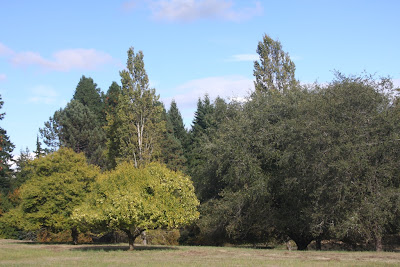 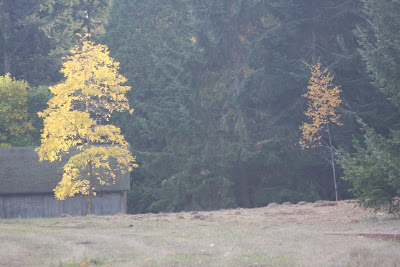 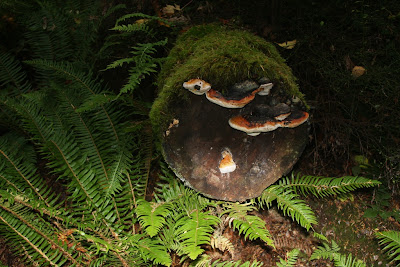 I have been to the Reserve on a number of occasions, and each time I see it differently. This was the first that I had a guide. Dwight Shappell (in his 80's) announced that he would lead the more exhaustive tour, but warned that we would have to move at a "brisk pace." I was the first to grab his coat tail, and a few others followed as well. Dwight kept his promise and we were panting at the first pause. He came clean at the beginning, claiming that he knew a lot about the plants in the Reserve, but he "didn't know it all."

But Mr. Shappell did know it all, as I joked with him later. We stopped at a native Abies grandis, and I knew previously that this species has a pleasant fragrance when the needles are crushed. Our guide mentioned this also, but challenged us to describe the fragrance. I was dumbfounded, not quite sure what I would liken it to, but he left no doubt when he said "tangerine." Mr. Shappell was full of trivia like this, and the only thing I could add to his knowledge was that Abies grandis was introduced into Europe by David Douglas, a fact that I know he'll add to his repertoire.

So Mr. Shappell impressed me greatly, and I was fortunate to see the place through his eyes. He keeps a brisk mind as well as a brisk pace.

It grew dark and began to rain heavily as we climbed aboard the bus to catch our ferry back to Seattle. But we were rewarded with a rainbow over the distant city, and the sky cleared as we made port. After all, my pissy morning turned into a great day.

Posted by Talon Buchholz at 2:22 PM