The Maple Society -- North American Region -- held its annual conference in Seattle from October 19th to the 21st. Unfortunately I missed Day 1 due to a farewell party for our departing Brazilian intern. Day 2 began with talks on "Maples of the University of Washington Botanic Gardens" by David Zukerman and "History of the Kubota Gardens" by Don Brooks. Then we departed to visit said gardens.

The sun would appear sporadically, and at the entrance it illuminated the warm brown trunk of a Thujopsis dolabrata. The cultivar was perhaps 'Variegata', as I could see minor patches of white in the foliage, but really the trunk was the main attraction.

I hurried to distance myself from our group because there is nothing worse for a plant or scenery photo than red and blue coats and pasty faces on the elderly. But in this small garden, already filled with too many visitors, in comes our group to triple the number. Also, no one should be allowed to talk or blow their nose, please. A small but well-lit Acer palmatum 'Osakazuki' glowed near the main path. Three turtle statues were artfully placed on some rocks in the main pond...oh, wait a minute, one moved his leg--they're real. 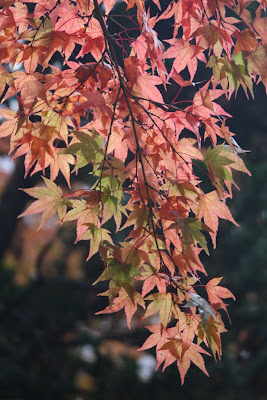 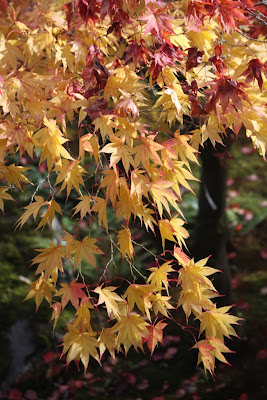 Large Ginkgo biloba were beginning to turn yellow, and I was pleased that these "inappropriate" trees were included in the garden. Unnamed seedling-grown Japanese maples provided interest from many angles. Acer japonicum 'Vitifolium' was totally defoliated, but its freshly fallen leaves seemed to float down a river of rocks beneath.

An Enkianthus species -- I guessed campanulatus -- showed brilliantly in a moment of sun. To label all of the plants, as I do, would supposedly ruin the mood of a Japanese garden. Visitors are encouraged to check in their brains at the gate, and to visit with their hearts only to get the real Japanese experience. I can be as dreamy as any Japanese poet, but what's wrong with learning something along the way?

I recognized two medium-sized trees, Acer maximowiczianum and Acer capillipes, but they will eventually become large trees. Acer maximowiczianum, the "Nikko" maple is native to southern Japan and even into China. With trifoliate leaves, the species resembles Acer griseum (with which it will cross), but maximowiczianum forms a larger tree and displays larger seed. Acer capillipes is commonly called the "Hair-foot maple" due to hair-like or capillary features on the seed stalks...which most people never notice. What is impossible to miss, however, is the green trunk with white vertical stripes. The crown will become very wide with age, and will probably exceed its limits in this garden.

The University of Washington Botanic Garden used to be known as the Washington Park Arboretum. I won't go into the politics of the collection, i.e. just who owns it, but one thing is obvious: there's not enough money. Don't get me wrong -- the place still looks good -- but the budget is mainly spent on limited maintenance. No more trees are being planted out, we were told, so no need for a propagation department to make more trees. I first visited the arboretum over thirty years ago, and they were crying about funding then, but at that time they had no idea how much worse it would become. 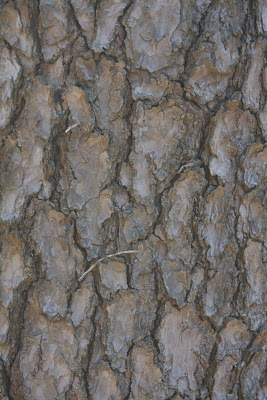 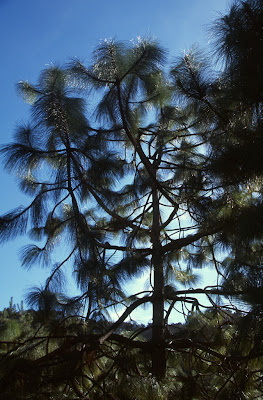 We split into groups and I marched into the collection. Before we come across any maples, I spotted my old friend, Pinus montezumae, which I admire every dozen or so times I have visited. It's fun to stand near the trunk and watch the needles shimmer in the light and the branchlets dance with the wind. This Mexican species honors Motecuhzoma Xocoyutzin, the Aztec ruler who had the poor fortune to first encounter the white guys. 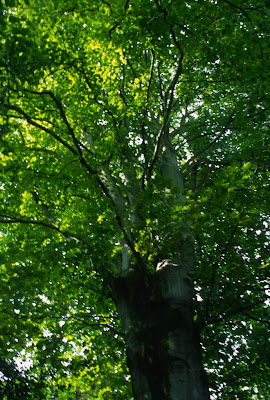 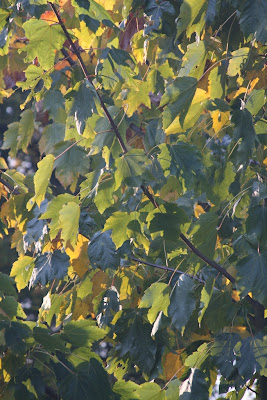 In spite of my many previous arboretum visits, and thanks to our guide, we were led to various Acer species that I did not know existed in the collection. Acer velutinum, the "Velvet Maple," is so named because of velvety leaves, and is a species from the Caucasus Mountains. It is far too large for most landscapes, but it looked good here with its yellow autumn foliage. Nearby was a fastigiate form of Acer rubrum with magnificent purple and red leaves. 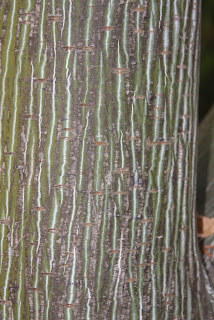 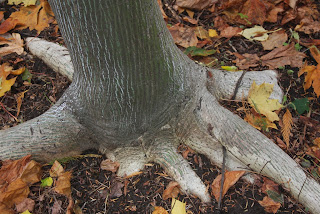 The leaves of Acer rufinerve were beginning to turn color. The species name is from Latin Rufus, referring to the reddish hairs on the leaves, flowers and seed. The green trunk can be fantastic on older specimens, as grayish diamonds appear. I can't remember if Acer tegmentosum had any foliage, for I was locked in on the trunk. The species features a rich gray-green bark with long white vertical stripes. It is very hardy, as it occurs in Siberia, Korea and Manchuria.

The botanically inclined in our group wondered if Acer amplum was correctly labeled, which I suppose would also include the nearby Acer amplum var. tientaiense. I've never seen the species before, but Hillier claims that it has "leaves like those of the Norway Maple, five-lobed, bronze when young." And that it comes from China. Other maple books don't mention Acer amplum at all. 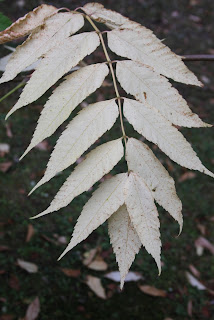 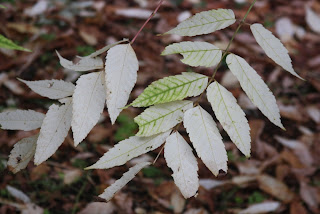 It was appropriate to see Dipteronia sinensis near the many Acer species, as it is the only other genus in Aceraceae besides Acer. I used to grow this Chinese tree -- or really it was a large sprawling shrub -- but gave up on it because there was no market for it, and it had little ornamental merit as well. Such trees are called "BIO" plants, that is: of Botanical Interest Only. 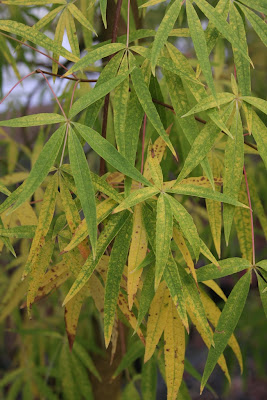 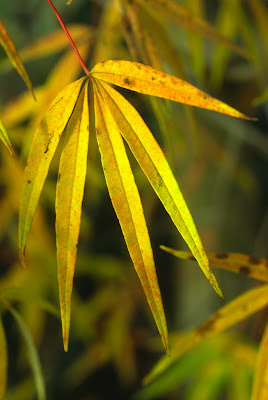 I was surprised to see an Acer pentaphyllum planted out, as every time I've done so they would succumb to the winter. Mind you, this wimpy tree didn't look good, and its leaves were a fraction of a happy tree's size, so I've substituted a photo from here at the nursery. This Chinese species is extremely rare in the wild, and I think that I had more in my nursery than were left in China at one time. What I find to be very strange is that you can propagate pentaphyllum by grafting onto Acer rubrum; but that still doesn't make it sufficiently hardy in my Oregon nursery. 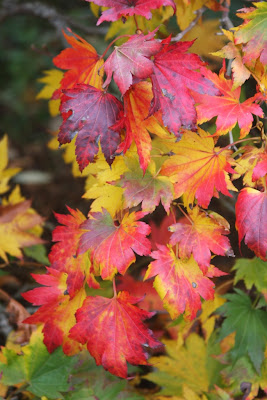 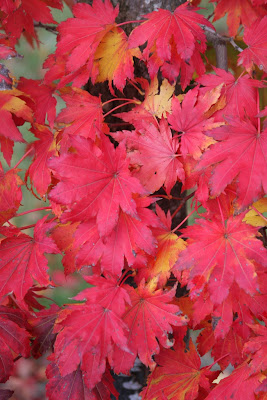 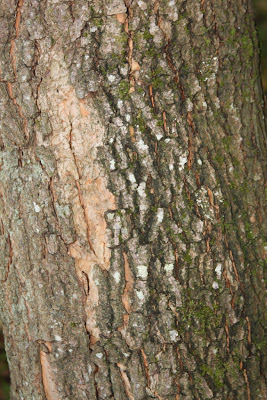 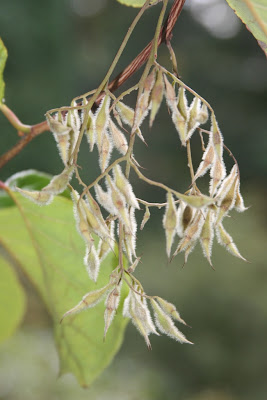 It was mostly a dry day at the arboretum, and when the sun occasionally broke through, I was able to photograph the beauty of a Callicarpa species, Fothergilla major, Lindera triloba, Magnolia soulangiana 'Brozzoni' and Pterostyrax psilophylla, the latter a tree that one only encounters in arboreta. 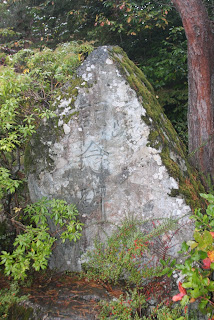 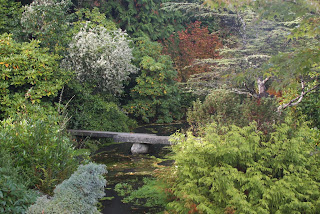 Finally we were bussed through heavy rain to the Kubota Garden in south Seattle. The sky was very dark and I despaired at our prospects, and regretted that we used up dry weather that morning with speeches.

The Kubota Garden is 20 acres in size, but with the partially hilly terrain one imagines the place to be three times this size. And it is jammed with plants. Very little is labeled because the late Fujitaro Kubota saw no use in plant identification, similar to most Japanese gardens. But good Mr. Kubota was open to including many species from outside of Japan, calling his garden "American with Japanese influence."

Mr. Kubota ran a landscaping service and a nursery on the site, and he designed and installed other gardens in the Seattle area, like the Bloedel Reserve (which will be featured in next week's web log). Kubota and his sons worked hard, but not everything fell in their favor, such as the Great Depression in the 1930's and the family's internment during World War Two. Today the garden belongs to the city of Seattle, and is maintained by their Department of Parks, so it is of course understaffed. Dynamo Don Brooks is the only full time employee, but I think he must have access to a hundred secret employees because the grounds are in very good condition.


I was surprised, but proud, that some of my plants were in the garden (via a customer, Amazing Maples, of Everett, Washington). Acer shirasawanum 'Sensu' glowed at the end of the path, and nearby was the original seedling of Acer palmatum 'Baby Ghost'. I was happy that 'Baby Ghost' looked healthy and was at home in this garden, but I felt somewhat guilty, like I had sold my child to the highest bidder, and was now forced to confront my baby. 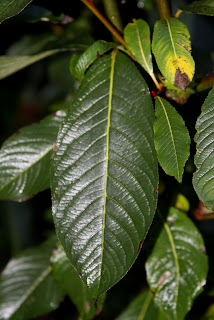 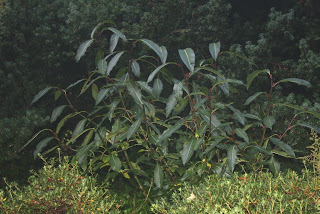 Maples were aplenty, especially laceleafs, but their names were hard to come by. Conifers included Cedrus atlantica 'Glauca' and 'Glauca Pendula', old cultivars that were once in favor, but ones that are less frequently produced now. A Pinus densiflora, the "Japanese Red Pine," showed off its red exfoliating bark. Enkianthus campanulatus and Euonymus alatus 'Compacta' go virtually unnoticed in summer, but absolutely shined this autumn. Lastly I stumbled upon a shrub that I had never seen before: Salix fargesii. It reminded me of Salix magnifica which I used to grow, although the fargesii leaf is more narrow. Without my guide I would not have been able to identify this willow.

It grew dark and everyone was tired, but I had to deal with the fact that I was the featured speaker at that night's banquet at the hotel. We had a great salmon dinner and the wine flowed freely. During my speech it was amusing to see a couple of people, at any given time, sleeping with heads back and mouths agape. The next day would be filled with garden visits, and really, my speech was one event too many. Next week I'll conclude the Maple Society tours.

Today is our one-year blogiversary. Fifty two blogs have been cranked out over the past year, and we've used nearly 3,000 photos. I say "we" because employee Seth manages the photo library, and I rely on his eyesight to cull out the photos of poor quality. I choose which photos to use for the blog, then Seth puts them in place. I think we make a good team; and indeed there may be no one else on earth who can tolerate working so close to me. I've said it before: No Seth, no blog.