Let's return to China, for we have unfinished business. Last week's web log featured conifers from China because I was inspired by the new book, Conifers Around the World, by Debreczy and Racz (hence D & R), and today I'll discuss some more.

Fokienia hodginsii is an obscure monotypic species that we used to grow. I don't mean obscure in China, but you seldom see it in western collections, and never in a retail garden center in America. The photo above was taken at Arboretum Trompenburg in Rotterdam. I liked Fokienia, but it would just never sell. It is what you call a BIO plant, meaning of "botanical interest only." The foliage reminds me of Calocedrus macrolepis, discussed last week, except green, not blue. It is hardy to USDA zone 7; and in an effort to hopefully boost its winter tolerance, I grafted it onto Thuja occidentalis 'Smaragd'. The grafts were soon six feet tall and very bushy, and all on top looked well. But the problem was at the graft union, which didn't adequately meld. I wish I would have put a few on their own roots before I threw them out. The Fokienia name is derived from the Chinese province of Fokien (which is now Fujian) where it was first discovered.

Most non-plant people think I'm crazy when I say that Ginkgo is found in all conifer references. Well, it is not in the D& R book. The species has apparently "survived in two remote areas in China, one on the border between Zhejiang and Anhui provinces in the east, and the other further west in Guizhou." (Keith Rushforth Conifers). 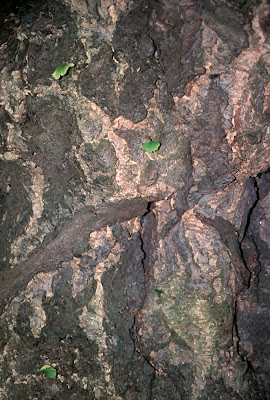 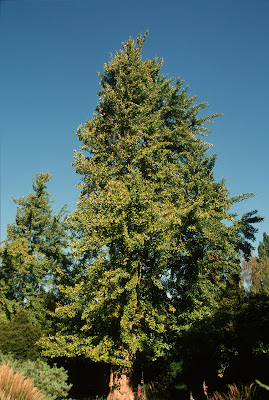 The Ginkgo in Utrecht, Holland, planted in 1730


An impressive specimen still grows at Kew Gardens in England, which was introduced in 1754. I used to grow a few trees from that original source, and simply called it Ginkgo biloba 'Kew', but nobody cared about the history so I eventually threw it off the ark. I was fortunate to visit the Utrecht Botanic Garden in Holland, and saw a Ginkgo planted in 1730, which was the first time in Europe, and I loved the old trunk. In a Japanese park a Ginkgo displayed impressive drooping breasts, but the best example of an array of knockers was on the cultivar 'Tschi tschi' growing in a bonsai pot.

I can remind you that thousands of Japanese civilians perished from the bombing of Hiroshima at the beginning of the nuclear age. The nearest tree to survive from ground zero was a Ginkgo, and today a shrine honors that event. We have discontinued to grow Ginkgo in our fields due to the western pocket gopher which eats the roots and lower trunks. I have been at war with the vile critters my entire career, but their victories far outnumber mine...and perhaps they would be the first animal to survive a nuclear attack. 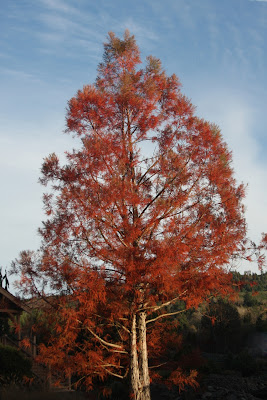 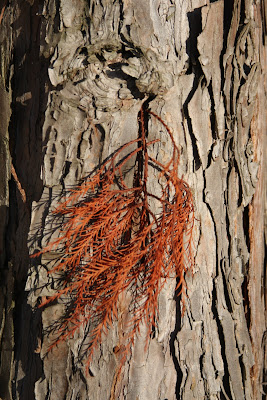 Glyptostrobus pensilis, the "Chinese Swamp Cypress," is a deciduous monotypic tree, and our beautiful specimen near the pond is almost thirty years old, and has survived two 0 degrees F winters. From a distance most plantsmen would assume it to be a Taxodium, and in fact Taxodium can be used as rootstock to propagate it. Glyptostrobus has a sparse feathery appearance, with gray-green summer foliage turning to coppery orange in early winter. The bark is attractive, as you can see from the photo above. 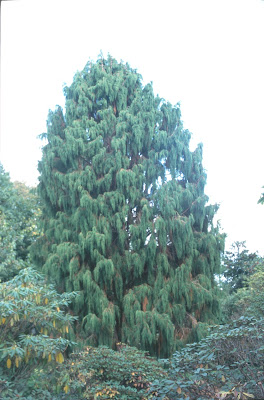 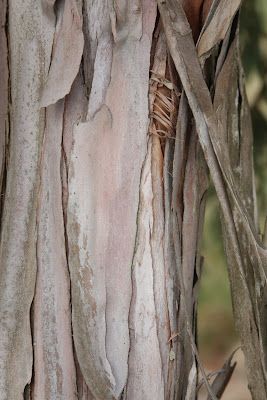 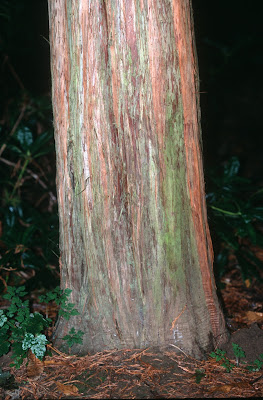 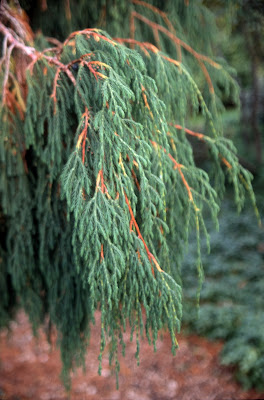 I will mention three species of Chinese Juniperus that I find most garden worthy: recurva, pingii and formosana. Starting with recurva, we grow var. coxii. D & R give var. coxii species status, claiming that coxii is "easily distinguished [from recurva] by its long drooping branchlets and longer needles without the pruinose-white covering on the upper surfaces." Yikes, how dumb I have been all these years, because on close inspection I guess I have been growing coxii, so I'll have to change the labels on my two trees. In any case, they are beautiful with a most graceful appearance, and clearly dispel the notion that junipers are old hat, drab and boring in today's gardens. 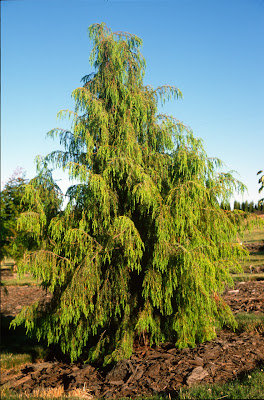 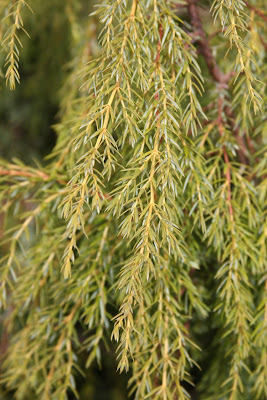 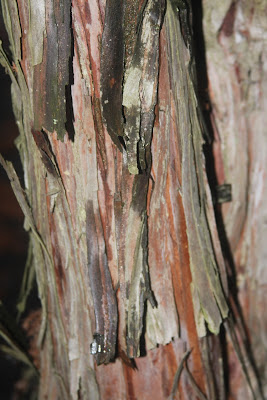 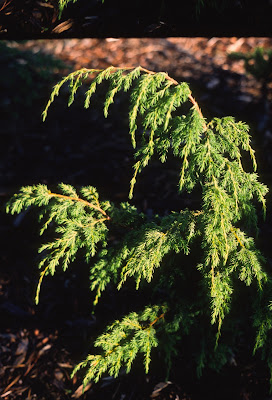 Equally graceful is Juniperus formosana from Taiwan, with var. mairei found on the mainland. Foliage is more refined than on recurva or coxii. Juniperus pingii is a handsome species, and our largest specimen along our main road is nearly thirty years old. We have opened the bottom so the attractive trunk can be appreciated. While the branches ascend, the tip branchlets nod down, so it too displays a droopy appearance. We once employed an impetuous knucklehead who was anxious to cut down the pingii, as he was not at all into junipers and wanted to make more room for spruces and pines, but fortunately he was edited from the scene, not the pingii. All three of these Chinese species look fantastic in the garden, and I'm especially impressed with them on cold foggy mornings. They ultimately grow to large size in the wild, with narrow leggy crowns, and seen there, no one would realize how fine they are in cultivation.


I collected Picea likiangensis var. forrestii many years ago, but I see that D & R name it var. likiangensis. Oh well, another label to change. It is called the "Lijiang Spruce" as it can be found in the vicinity of Lijiang in northwest Yunnan, a charming little town I visited in 1988, but one that has been greatly transformed into a city now, I'm told. Anyway it's always fun to encounter a tree in the wild that you also have in your collection. Picea likiangensis var. likiangensis has attractive short blue-green needles with silvery undersides, and grows (at least when young) into a neat Christmas-tree shape. The best feature, however, is the maroon spring cones that later mature to a delicious brown. One expert was quick to tell me that my photo above was not a spruce, that it was an Abies because of the erect cones. He apparently didn't spend much time in the garden in spring, for many Picea species begin with cones erect...that later drop downward, which also can be seen above. Maybe he should hang his erect head down in embarrassment.

One of my favorite of all pine species is Pinus bungeana, the "Chinese Lacebark Pine." The canopy is not particularly attractive, and the brittle branches can break in an ice storm, but the colorful exfoliating bark makes it a must for the garden. I have not seen it in the wild in China, and according to D & R "its low-elevation stands have been cleared and it is uncommon in the wild." But I have encountered a venerable old specimen in the Forbidden City complex in Beijing, which looked happy in spite of the litter and packed earth at its base. Well, that was twenty four years ago, and I hope it still thrives. 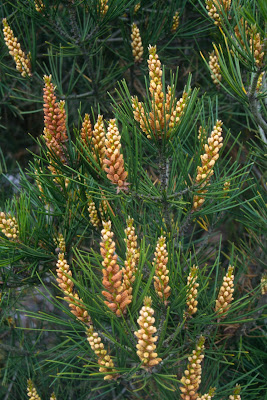 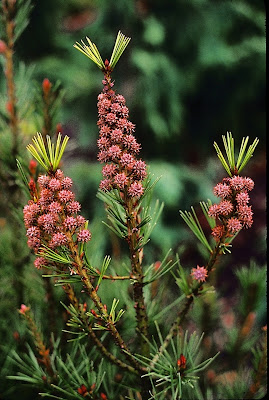 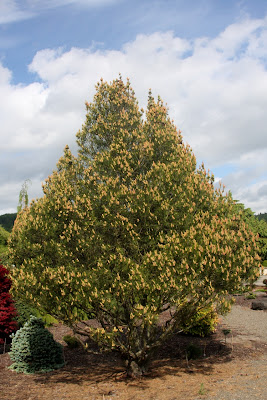 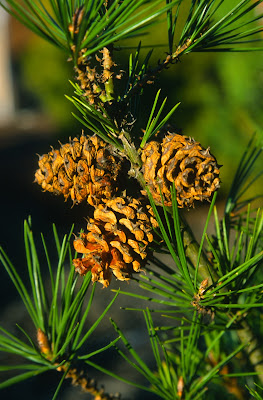 
The species is fairly slow-growing, and a number of cultivars are even more so. One is simply called 'Compact Form' and another is 'Temple Gem', my introduction of thirty years ago which is approximately one-fourth the size of the species. Even more dwarf is 'Diamant' which grows into a flattened globe. When 'Diamant' ages, one should perhaps prune out the inner foliage, or else the trunk would never be seen, and it is also something I recommend for the 'Temple Gem'. 'REL WB', hopefully not a permanent name, originated as a witch's broom mutation, and so far it appears more dwarf than 'Diamant'. 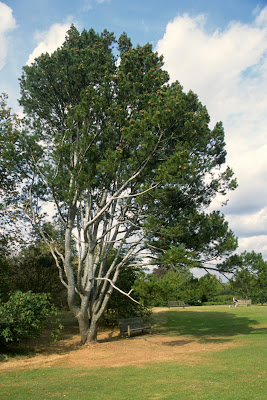 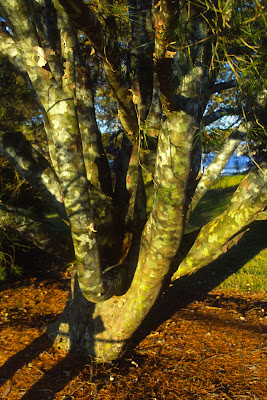 Kew Gardens in England has an impressive bungeana specimen, as does the Dawes Arboretum in Ohio, one that has been given the cultivar name 'Silver Ghost'. I grow 'Silver Ghost', but never has the trunk been as white as in Ohio. It is probably more of an age, soil-type or climate that makes 'Silver Ghost' so attractive. At Martin Brooks Nursery in Pennsylvania I discovered my favorite bungeana trunk ever, with its orange and lime-green bark glowing on a rainy day. While photographing the trunk, I could smell a cigar growing stronger and stronger, so I knew that Mr. Brooks was on his way over to me. 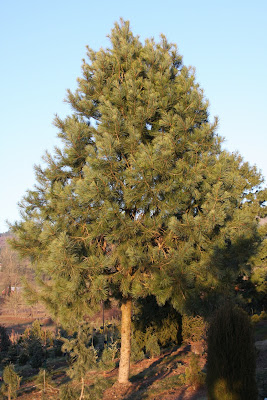 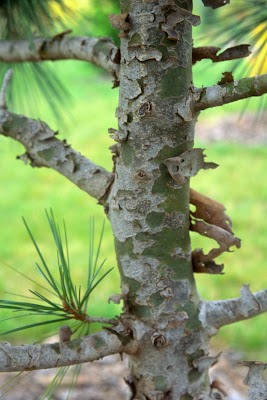 A similar species is Pinus gerardiana from the northwest Himalaya, Tibet, Pakistan and Afghanistan. I suppose you could call it a BIO plant too, as it is less hardy, and the trunk is less colorful than bungeana. I do not grow the third of the "lacebark" pines, but I wished I had it to complete the trio, and that is Pinus squamata. Again, I quote from D & R, that it is the "world's rarest pine," with only 36 existing trees, and was not scientifically described until 1992. Pinus squamata is different from the other two "lacebarks" in that it has five needle-clusters instead of three for the others, and has characteristics of the "white pines." 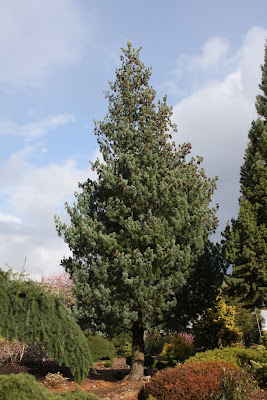 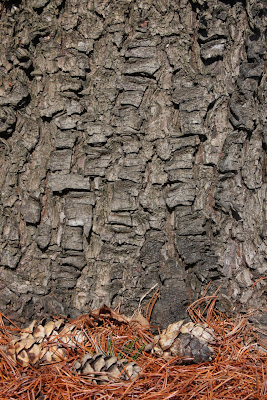 Pinus kwangtungensis is native to southern China, from Kwangtung province (now known as Guangdong) and into Yunnan. It is similar to parviflora from Japan, but as a species, I think I like kwangtungensis better, except that it takes longer to type out the name. The cones are more attractive than with parviflora, and the needles are also more interesting. Needles are in fascicles of five, while each needle has three sides. Two sides are bright bluish-silver, and the third is a rich emerald green.

The final Chinese pine that I'll discuss is Pinus wallichiana which occurs in northwest Yunnan. Even though I was plant hunting in Yunnan years ago, I never saw it in the wild, but at the time I wasn't even aware that it existed in Yunnan. I thought I saw a wallichiana in Bhutan, and apparently so did Hillier, for in his Manual of Trees & Shrubs the common name for wallichiana is "Bhutan Pine." According to D & R, that would be Pinus bhutanica. They are similar enough, but with some different characteristics to warrant species separation, according to the "splitters." Anyway, it makes a beautiful large specimen where space allows. 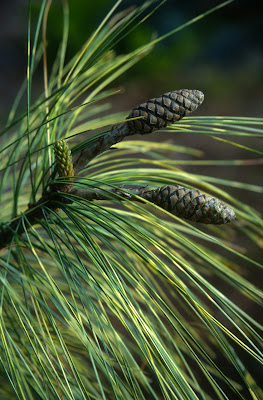 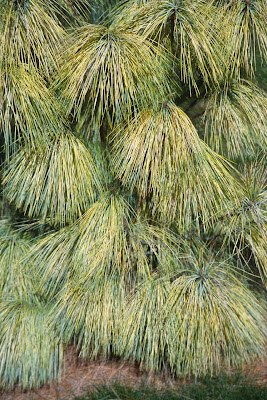 Cultivars of wallichiana have always been popular. 'Frosty' and 'Zebrina' are similar, with yellow banding to the long needles. They are far more colorful in midwest and east coast locations than in Oregon. 'Nana' is far more dwarf; and I don't know its origin, except that it closely resembles a Pinus strobus, and a boring one at that.


One of my favorite Chinese conifers is Pseudolarix amabilis, amabilis being Latin for "beautiful," and I sure like it better than any Larix species. It too is deciduous, but whether in leaf or not, it is a far more regal tree than the gangly larches, and also more slow growing. The Pseudolarix cones are "absolutely fantastic!," as the late plantsman Van Hoey Smith would often say, for they open to rosettes which remind me of artichokes, and no larch does that. Foliage is wonderfully soft and lush, and the bright green needles change to yellow-orange, then eventually to deep-glowing orange in fall.

Hopefully you are enjoying this botanical journey to China, but I think it's best now to end...so that the weary reader can get back to other things; and me too: like making a living with plants. We'll visit China again next week, as there are still many excellent species to enjoy. 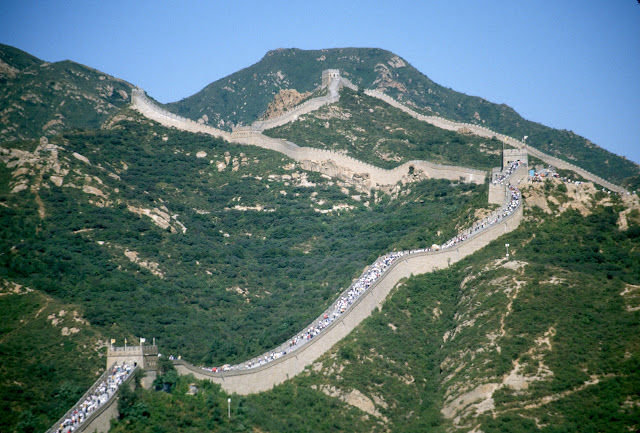 Posted by Talon Buchholz at 1:30 PM