I recently purchased the massive Conifers Around The World, and had to lug it ten blocks back to my car. It is authored by two Hungarians, Zsolt Debreczy and Istvan Racz, who began their venture in the mid 1970's. The two volumes, with over 1,000 pages and a few thousand photos, seemingly misses nothing, no matter how obscure, and includes many species I have never heard of before. I have always imagined that if I was stranded on a deserted island, I would be perfectly happy if I had enough food, a pretty hula girl, and the Oxford English Dictionary. But maybe now I would take the food, the girl, and the conifer book.

My first night with the book--at home, not on my fantasy island--I read about the wealth of coniferous species in China. Some are rare, some not, and again there is a sizeable group that I have never heard of before.

So today's blog will focus on some of these species, ones that I have grown for profit, and others where I have just collected one tree for the Arboretum.

Abies (or "True Firs") are well represented in China. I like them all, but my favorite has to be Abies squamata, the "Flaky Bark Fir." Although it is native to dry habitats on the border with Tibet, and can be found at an elevation of 15,000 feet, nevertheless it succeeds quite well in the Flora Wonder Collection. I've also seen it thrive in Germany, and a particularly impressive specimen exists at Arboretum Trompenburg in Rotterdam. I presume these are seedling grown, but mine are produced by grafting (as low as possible) onto practically any Abies rootstock, with hardiness and soil adaptability being the important factors.

The main feature of Abies squamata is the beautiful exfoliating bark. The photos above show a great similarity to Acer griseum. The foliage of squamata is as attractive as any other Chinese species, and it sports deep blue cones. We have had crops of six-year-old trees cone, and at the same age the bark is already noticeable. It is certainly one of my most favorite of all conifers.

I'll mention one other Abies species from China, Abies beshanzuensis, not because it is more attractive than the others, but because it is extremely rare, indeed the "rarest conifer in the world," according to Debreczy and Racz. My trees resemble the photos in their book, so I suppose I have the correct species, but of course I don't know for certain. So if there were only eight trees in existence at their discovery (1975), which is now reduced to only three, how did I get it, and furthermore, should I even have it at all? Scions were sent to me by a botanist--I won't say who--about twelve years ago. He used to ship to me a number of other rare conifers, and even though the scionwood was old and scrappy, usually at least one would survive. I had no idea at the time, however, that beshanzuensis was endangered. I have propagated it on various rootstocks, and when available, Abies firma, which it resembles, might be the best choice. To date none of my trees have coned, in fact that's its problem in the wild.

An obscure conifer species, but one that I like, is Amentotaxus argotaenia, the "Catkin Yew." Sadly it is only hardy to USDA zone 8, and my one tree currently resides in our tropical Greenhouse 20, our unprofitable, but fun house. It does resemble Taxus, or "yews;" in fact the catkins are known as aments, hence the name. Red berries will occur at branch tips, although my ten-year-old tree has not yet fruited.

Calocedrus macrolepis is a beautiful species, but it too is not very hardy (USDA zone 8) as it comes from southern China in Yunnan province. This "Chinese Incense Cedar" features flat sprays of blue-green foliage with silvery-blue undersides. Its texture and appearance are more appealing to me than any Thuja or Chamaecyparis, and also more so than its sister species, decurrens. This winter I'll graft a few onto decurrens, which is plenty hardy, and eventually plant one out. Calocedrus means "beautiful cedar."

Cunninghamia lanceolata is known as "China Fir," and it is frequently planted as a forest tree, for the trunks are usually straight for this fast-growing species. It is rarely used in American landscapes for a number of reasons: when it is not totally happy it can be ugly; old needles persist, so when damaged, or browned from extreme cold, the tree will look practically dead for a few years; and finally the needles are sharp as hell, so it is not friendly to the touch. My grandmother in Eugene, Oregon had a hedge of Cunninghamia, which served well to keep the neighbor dogs and children out of her yard. Very strangely, near the airport in Hillsboro, Oregon, a planting of Cunninghamia was used in the highway divider. I don't think 99% of the landscape architects know anything about the species, but apparently one did. 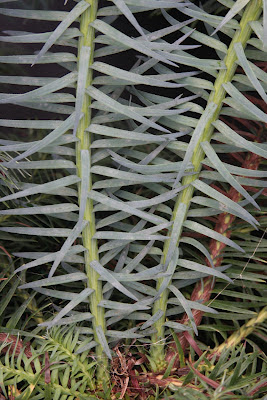 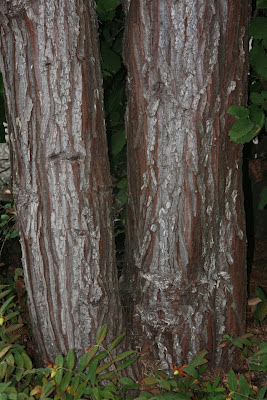 
The cultivar 'Glauca' can be attractive, and a wonderful specimen exists just two miles from Flora Farm in a lower working-class neighborhood. I photographed the cultivar 'Bánó' somewhere--I can't remember--but I do not grow it. At Arrowhead Alpines in Michigan I encountered a specimen with no intention of producing a leader, and they dubbed it 'Glauca Prostrate'. My plants of it also tend to grow laterally, but eventually, I'm pretty sure they will develop a leader or leaders. But woe if you have to pull weeds next to the vicious blades. 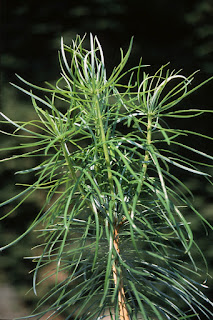 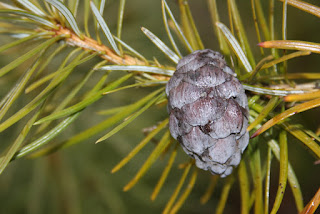 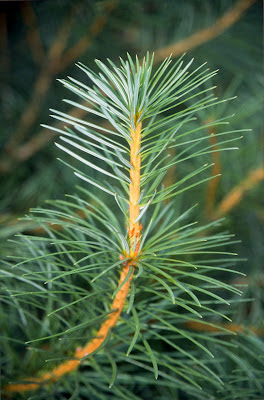 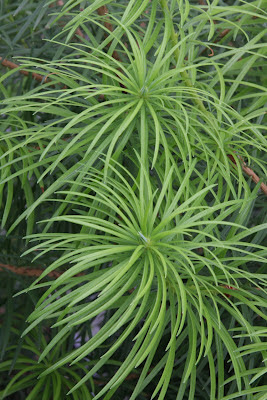 Cathaya argyrophylla is the "Chinese Silver Fir," and is described in Conifers Around The World as "unique a living fossil as the Great Panda of China..." Well, the public won't be lining up to view it I'm sure, but it is a very pretty conifer, and most photogenic don't you think? The needles are gray-green with silvery undersides, hence the specific name argyrophylla, but unfortunately the small cones are ugly little turds, as photographed here last year, and would be of no value except to propagate more. We can root the species, but never do very well.

Just what is Cathaya, other than meaning "from China?" Early on in my career it was the "holy grail" of conifers, though only hardy to USDA zone 7. Every conifer collector would die to have it, but China was emphatic that it belonged to China, that nobody was going to get it. A story went around that three Chinese individuals were caught trying to smuggle out Cathaya, and they were summarily executed. It is a believable story unfortunately.

So anyway we eventually received some seed which germinated. When I mentioned Just what is it?, the question was pertinent, because it was its own genus, and what could be used as understock? Some suggested Sciadopitys, or Larix or Pseudotsuga. Even Abies. I haven't tried any of the above, but maybe should, as our rooting propagation ranges from low to dismal. And I'll keep my seed source secret so the Chinese won't come calling.

My final thoughts about Cathaya are derived from reading Chris Callaghan's excellent article Cathaya argyrophylla, some little known facts in the International Dendrology Society's 2011 yearbook. For example "...few people outside of, and probably within, China (including myself until recently), would know that the botanical discovery of Cathaya, recorded for 1955, was actually 17 years earlier and preceded that of Metasequoia glyptostroboides, the other more renowned Chinese 'living fossil' found by T. Kan in Hupeh in 1941, by three years."

Later he writes "It is interesting to speculate that had Cathaya seeds or plants been brought out of China before the war, whether it would have shared some of the fame enjoyed by Metasequoia today, instead of sinking into virtual obscurity everywhere other than China."

Callaghan furthermore projects that Cathaya should be upgraded to endangered status, as fewer exist than with the Metasequoia population. In China a nature series, Forest China, filmed a program entitled Hermit of the Forest, and in the program the Chinese give Cathaya the ultimate accolade, "the Lord of the Firs."

I won't repeat the discovery of Metasequoia glyptostroboides, the "Dawn Redwood," and its "living fossil" acclaim, as it has been told many times before. It will quickly grow into a huge tree with a beautiful fluted trunk--and you know I am a trunk man. I especially like the tiny cones, as they look like miniature Sequoiadendron cones, except that the Metasequoia are cubically shaped, something my children find appealing. Meta is a Greek word meaning "after," "beside," "with" "like" or "akin to." Strange that two Chinese botanists, Hu and Cheng, would use a Greek prefix for their wonderful new genus, but then it was also strange that the British tried to cram Wellingtonia down our throats, and that Sequoia, the name of a Cherokee Indian leader was used for the coast redwood, the tallest tree on earth, and then Sequoiadendron eventually for the most massive on earth. 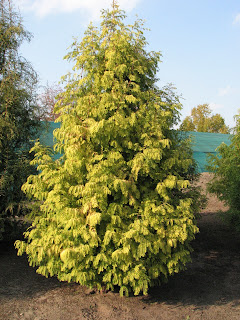 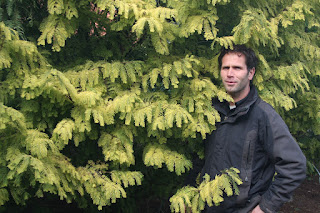 Right: Nelis trying to hide from the camera.


'Kools Gold' is known as 'Golden Guusje' in Europe.

Metasequoia is a handsome tree, but requires a park or large estate to accommodate it. Much preferred horticulturally are the various cultivars. I'll only list them, as I've promoted them many times before: 'Kools Gold', 'Gold Rush' (or 'Ogon'), 'Miss Grace' and 'North Light'. One of my "fantasy" trees, would be to find a bright powder-blue form. Then it would become my first-ever tree to patent, and I would become wealthy, and I could finally retreat to my deserted island after all. 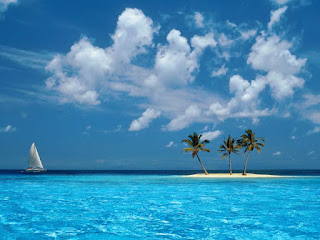 I can't continue after that fantasy, so Chinese Conifers, Part Two will continue next week.
Posted by Talon Buchholz at 9:29 AM