Let's head back to China for the final installment of Conifers from China, Part 3. There are a number of species' plant names that commemorate an individual, one who seems to be unique, often extraordinary, and above all, in the right place at the right time. One such plantsman was Robert Fortune, he who trolled China when opportunities were great. George Forrest, E.H. Wilson, Joseph Rock...and many other toilers of botanic and horticultural renown have received their everlasting fame, but probably in most cases not enough, considering what they went through.

Perhaps Fortune's major accomplishment was to steal tea (Camelia sinensis) from China so that the British could plant and harvest it in India. Fortune was once employed by the Royal Botanic Garden in Edinburgh (a fantastic institution I have visited three times), and was eventually sent by the Horticultural Society to collect tea plants from China, and to study the processing secrets. On behalf of the British East India Company he snuck tea from China to India in 1848. Fortune disguised himself as a Chinese merchant, and everything he did was illegal, as well as dangerous. Eventually he died, as we all will...but remember, when you drink your next cup of Darjeeling or Earl Grey that Robert Fortune helped to spread the wealth.

Fortune's introduction of Cephalotaxus fortunei occurred in 1849, and is known for its glossy dark-green leaves. This "Chinese Plum Yew" seems happiest in shade, and so it is useful in a variety of landscape situations. I find it a little boring, frankly, but the oval green-brown nuts are interesting. 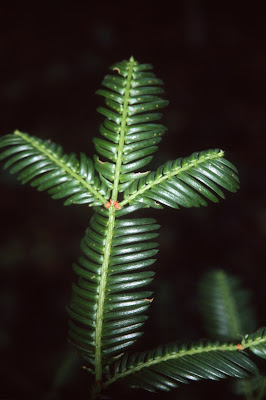 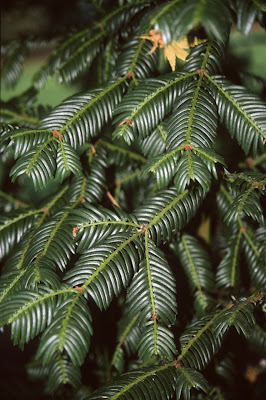 I first encountered Cephalotaxus oliverii in England, at Wisley, but it is probably not winter hardy in Oregon. In its happy location its foliage was very luxuriously green, with two bright stomatal bands beneath each leaf. The trunk was reddish brown and exfoliating, but it was much too dark to photograph. 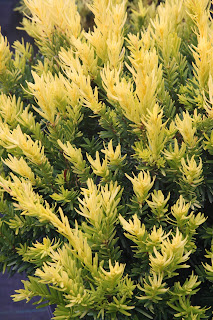 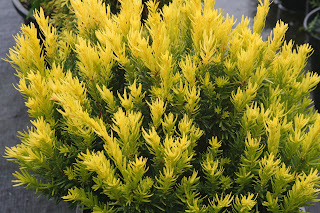 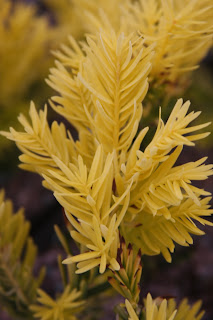 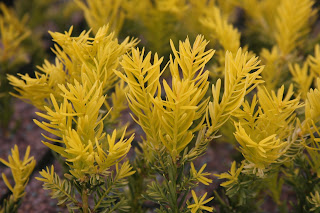 Taxus cuspidata is the "Japanese Yew," but it also extends into China. No one grows just the straight species I suppose, but the cultivars can be wonderful, especially as they are hardy to USDA zone 4. 'Bright Gold' can be grown in full sun, and it is also impressive in shade, only slightly more green. 'Rezek's Gold' is so bright that it will burn in full sun in Oregon, but the central and eastern sections of the USA might be ok with the added humidity. 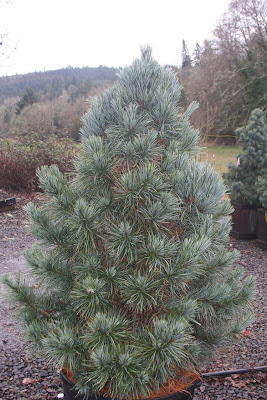 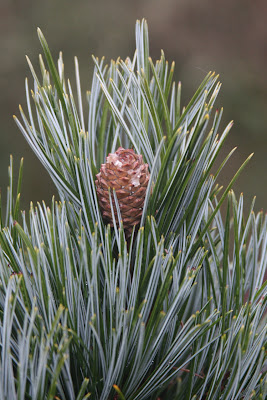 I skipped an important Pinus species last week, but I'll discuss koraiensis now because it is horticulturally important. The species, from Korea obviously, but also from Manchuria in Northern China, is itself only encountered in arboreta, but sometimes those are chosen for outstanding qualities and are given cultivar names. Two excellent blue forms, 'Silveray' from Arboretum Gimborn in Holland and 'Morris Blue' from the Morris Arboretum in Philadelphia are two such selections.

I was responsible for the 'Morris Blue' naming and introduction apparently, although the whole incident was unofficial and unintentional on my part. I was in Philadelphia with Greg Williams of Vermont years ago, and he knew of a particularly blue Korean pine and pointed it out to me. Yes, very nice, very blue. Greg asked if I would be interested in scions if he could get them. The answer was yes, so he sent me the starts. Eventually customers would see the first trees in my fields, and I would sell them and make more. In hindsight I should have consulted with the Morris for naming permission. In a year or two I'll be back in Philadelphia for a maple symposium, and will be sure to visit the blue Korean, and apologize to anyone who feels I should.

'Morris Blue' forms a full, dense tree, and I remember the original with a broad canopy. 'Silveray' is just as blue, but it grows with a more open, "alpine" look. Both are great selections, but the grower can immediately tell them apart. Another selection, from Stanley & Son Nursery in Oregon, was thought to be 'Silveray', but it is not, it is slightly different (from my observations, also from a few other growers). I named it 'Stanleyray', just as an internal guard against mixing it up with the true 'Silveray'. And of course, customers wanted to buy them too, so that particular "cultivar" is also in the trade. I don't intentionally try to make up a bunch of cultivars, but that is what seems to happen. 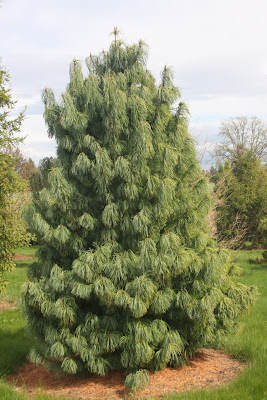 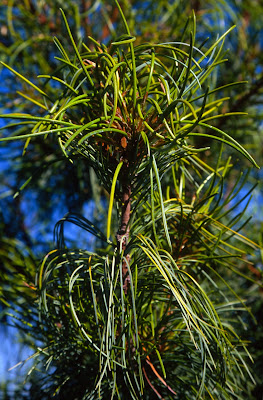 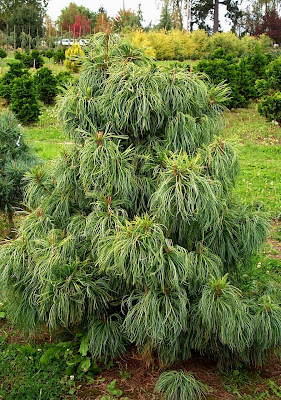 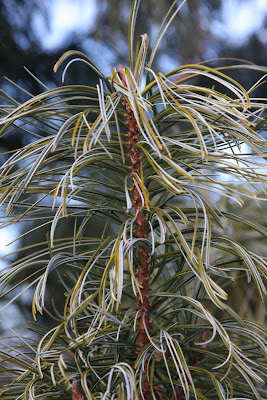 Pinus koraiensis 'Dwarf' and 'Nana' look very similar, and though not exactly "dwarf," they are nevertheless slow-growing and compact. 'Oculis Draconis' and 'Jack Korbit' feature long needles with yellow banding, with the coloring being more sparse in Oregon than elsewhere. An exciting new miniature koraiensis was discovered as a witch's broom mutation at Gee Farms in Michigan. 'Gee Broom' is its cultivar name, and it is hardy, strong, easy to grow and very cute...and is certainly one of the best dwarf pine introductions ever.

For years (my entire career anyway) the simple nurseryman was supposed to decide if he should call the Chinese evergreen Thuja orientalis, Biota or Platycladus orientalis. We don't really care, but we do hate it if we have to change. There are labelling issues, customer recognition problems etc, and we're already tired just trying to grow the damn things. So I stayed with Thuja orientalis, although Debreczy and Racz champion Platycladus orientalis. 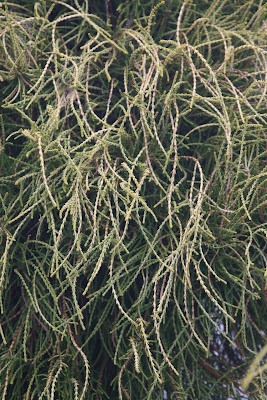 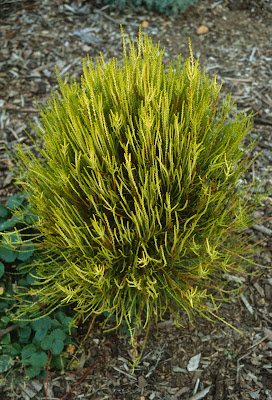 Thuja orientalis is a tough Chinese species and can tolerate dry conditions, but I never saw one in the orient that looked attractive. A number of cultivars do, however. Probably the most popular in the marketplace today is 'Franky Boy'. I first encountered this cultivar in Holland twelve years ago and thought it was worth having, but I never dreamed how popular it would become. Well, it is hardy, easy to grow, compact and displays curious thread-like foliage. It is colored yellow and green from spring through fall, then evolves to a bronze orange in winter. My wholesale prices are fair and not expensive, but I can see the day when thousands are grown by the large-acre producers for the dismal box stores. 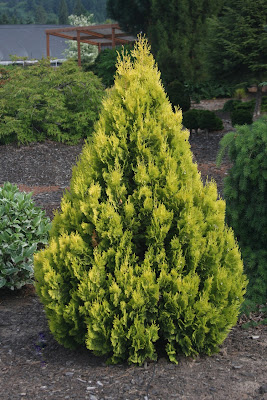 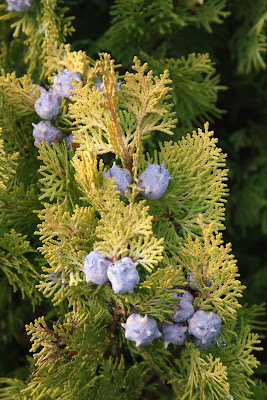 
Thuja orientalis 'Morgan' is a plump golden dwarf, while 'Weedom' is equally gold and a faster grower. 'Blue Cone' is a blue-green cultivar and is dwarf and compact. 'Van Hoey Smith' is probably the prettiest of all the cultivars, and Arrowhead Alpines in Michigan has the most attractive specimen I have ever seen.

An oddball from an understock seedling batch--we use Thuja orientalis as rootstock for Chamaecyparis nootkatensis cultivars--was pulled out by me twenty five years ago because it looked very different. Unknown to me at the time was the European cultivar 'Athrotaxoides', which looked like my seedling. My form was propagated and a few were planted in the field. Van Hoey Smith from Arboretum Trompenburg discovered it at my nursery, and strangely I thought, he was fascinated by it. There was a label near one of the trees that said "Lisa." He assumed that was the cultivar name, but in fact it was the name of the propagator. He was quickly on to the next plant and seemed uninterested in my explanation. "Joan, Joan! Where is my film?" etc. I thought the issue was moot until I saw a photo of it in Van Hoey Smith's Conifers: The Illustrated Encyclopedia on page 652. Since he liked the tree, I officially named it 'Locogreen' due to its crazy twisting foliage. As you can see above, 'Locogold' originated as a colorful mutation on the original 'Locogreen' seedling. 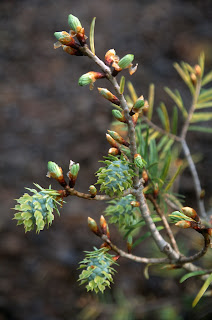 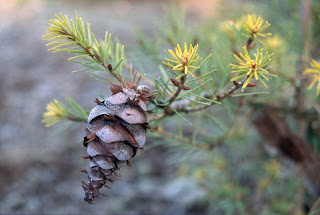 
I find Asian Pseudotsuga very fascinating, that Asia hosts species as well as we do with our common "Douglas Fir," Pseudotsuga menziesii. One thing for sure is that the Asian species have more interesting cones than does our native. Pseudotsuga japonica, though not from China, has cute pointed cones, while sinensis var. gaussenii displays cones that remind me of Picea polita, of all things. Pseudotsuga sinensis var. sinensis is slightly different, but still with attractive cones. These species are perfectly hardy in Oregon, in fact I planted a japonica and a sinensis at the foot of my two impressive menziesii. Let them interbreed if they want, and I'm sure that the Picea polita will stay out of the way.


There you have it: three web logs celebrating the conifers of China. China, the "Mother of Gardens," holds her head high with a wealth of species, equal in interest to any other country. But the best is yet to come. Next week we will revisit China, with a travellog of my 1988 trip to Yunnan, and it will feature that province's beautiful people. Plant hunting (as an excuse) can lead you to other pleasant discoveries; and guys, definitely tune in next week! 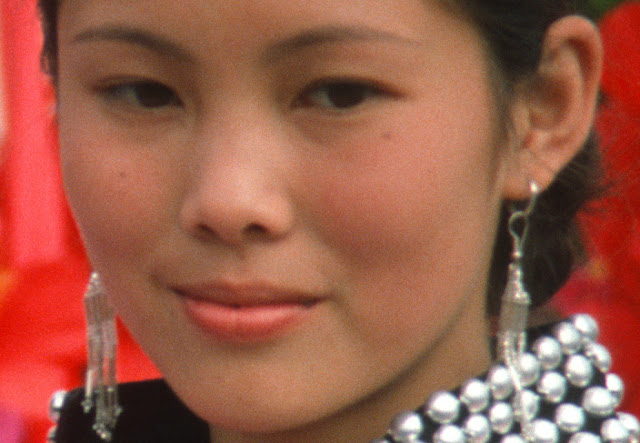