Buchholz Nursery shows off its specimen plant material via numerous display gardens. Let's face it: greenhouses and can yards are kind of ugly, so it's fun to hide the production side with gardens, which in some cases feature the largest cultivars in the world. Every garden here has a name, and in past web logs I have featured our original Display Garden and the Blue Forest.

Today we will go to Flora Farm, where our field production is located. At the top of the road one can look down onto a collection of plants, many of them maturing nicely. There are a total of seven themed gardens, with meandering roads dividing the sections. They are named Acer, Abies, Cornus, Mahonia, Magnolia, Betula, Quercus, Cercis and Sciadopitys. I guess that's nine gardens, then. The sections are not filled entirely with the themed plant, in fact, they might not even be in the majority.

The "Upper Gardens," so-called...if you're down by my house and are looking up the hill, comprise an area of over ten acres. I've wasted good farm land, which used to grow strawberries wheat and corn, with my damn trees. No doubt some in the neighborhood are dismayed by the transformation, but hopefully others can applaud the collection. I'm sure the average motorist, zipping past at 60 miles per hour, has no clue about the incredible array of plant species. Wouldn't Linnaeus or David Douglas be impressed with this astounding gathering from the best corners of the world?

We'll start with the Acer section, which is closest to my house. Everyday as I drive to and from work, I pass an Acer griseum. The species used to be rare, and was found only in the most exclusive of gardens. Now they are ubiquitous, and I've seen many used as street trees. And why not? Seedling growers have finally figured out how to stratify and germinate the "Chinese Paperbark Maple," and so they are produced by the thousands, and consequently their value has dropped from a sales point of view. At the nursery we specialize in griseums in large sizes, and when placed in a new landscape they can make an immediate impact. We grow two cultivars as well: 'Susanna', a round form from Susanna Nursery in Maryland, and 'Narrow Form' which was an original seedling selected at Buchholz Nursery.

Acer griseum was discovered by E.H. Wilson in central China, and was introduced by his employer, Veitch Nursery, in 1901. Its name is derived from "griseus," or gray, referring to the color of the down on new leaves. In fact, one spring I watched a griseum everyday, as the buds swelled and the foliage developed into maturity. Then finally I was rewarded with a three-week display of fire-orange color in fall. 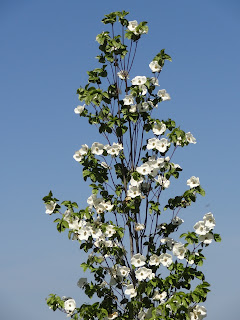 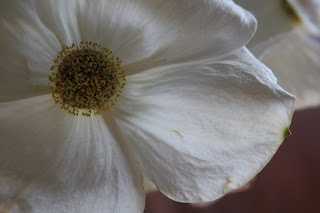 
Near the griseum is Cornus nuttallii 'Colrigo'. This dogwood is famous for its enormous white flower bracts. It is interesting to see this cultivar in the evening, just before dark, as it resembles a tree full of moons, the day's energy captured into orbs which then glow in the night. Also known as 'Colrigo Giant', its name refers to its discovery in the 'Columbia River Gorge'. 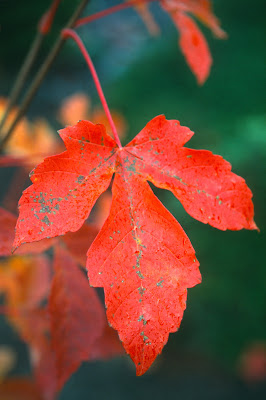 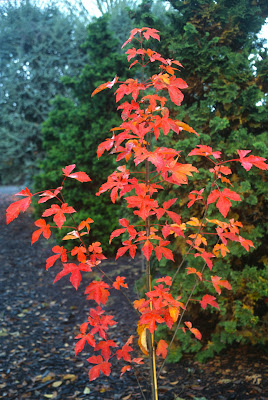 In the same area is Acer x 'Purple Haze', a hybrid of Acer griseum crossed (accidentally) with Acer pseudoplatanus. The leaves are larger than Acer griseum, but similarly shaped, while the pseudoplatanus influence is noticeable with the purple undersides. A "purple haze" does occur in spring when a breeze fans the leaves, an impressionistic moment of suggested movement and color. Seeds that mature in late summer will be a rose-purple color as well. I did not discover this cultivar; it popped up in another grower's griseum seedling batch. Early on, I sent it to Europe to get various maple experts' opinions about the parentage. Some begrudgingly admit that it could be a true hybrid between the suggested culprits, but like passing a kidney stone, they grimace at what botanically should not occur. Hell, I don't know, even though I occasionally do know more. I'm not an expert at DNA analysis or chromosome counts, and I own no microscope...and no scientist cares about my conclusions; but I do recognize the "smell" of trees, the essence of them, and that has developed primarily because I needed to really know them in order to survive and feed my family. 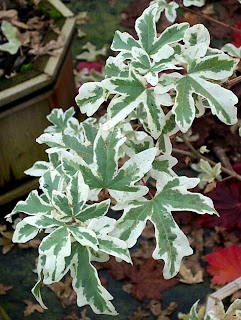 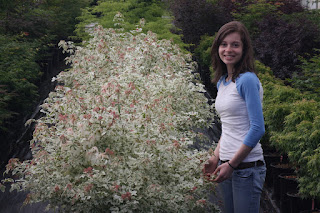 Ok, out of the purple haze rut and on to Acer campestre 'Carnival'. This has turned out to be a wonderful cultivar, a variegated white-and-green-leaf form that glitters impossibly in the landscape. I say "impossibly" because so much white in the foliage should certainly burn, yet it does not. The Buchholz Nursery heat record--for my career, that is--was 108 degrees Fahrenheit a couple of years ago. 'Carnival' in full sun withstood the brutality. Also, the "hedge maple" is easy to grow, and I've never seen disease or insect problems. We keep our specimens pruned, to keep them compact and colorful, and I've never had too many. Carnival is also nice in moderate shade, where it can become more purely white. This cultivar is from the Netherlands and was introduced in 1989. 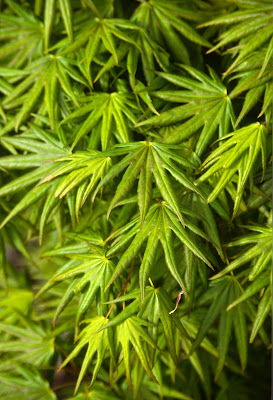 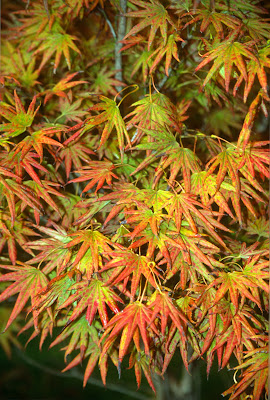 Moving further into the Acer garden, we come across the original seedling of Acer shirasawanum 'Mr. Sun'. At twenty years of age, it is only 7' tall by 7' wide. But as I've reported repeatedly, usually the original seedling is of smaller stature than grafts from it on vigorous rootstock, as mentioned in last week's web log concerning Acer palmatums 'Mikazuki' and 'Fairy Hair'. 'Mr. Sun' is fun, really a fun plant for its sun-shaped leaves. I've produced five children myself, and I've seen drawings from many others, where the good ol' sun is depicted exactly as Acer palmatum Mr. Sun's leaves appear. It's like the leaves should be wearing sunglasses on a box of raisin bran, with happy Mr. S. smiling at our nutritious preference.


A couple of Acer japonicums are also in this area. Huge, mounding 'Green Cascades' are beginning to crowd the road, and two will certainly be transplanted this winter. Acer japonicum 'O taki', which translates as "big waterfall," is incredible in fall.

The original seedling selection of Acer palmatum 'Iro iro' is very dense, now about eight feet tall and wide. It can look very pretty in spring with its small leaves variegated with pink and white. The Japanese name means "beautiful color," but I'll admit that it's nothing special after our 100 plus degree days last week. The foliage didn't burn, but the entire tree bleached out into a dull light green. While I'm happy to keep this original 'Iro iro', it is no longer in our production plans, as it is outperformed by the more vigorous Acer palmatum 'Alpenweiss'. 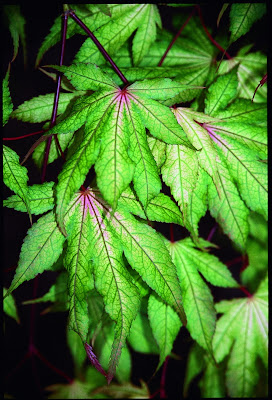 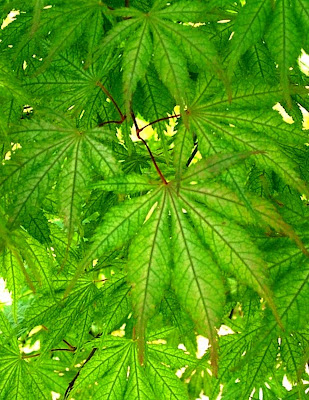 Two trees of more merit are a few steps away: the original seedlings of Acer palmatums 'Amber Ghost' and 'Grandma Ghost'. Nothing is sacred in this collection though, and it's certainly not beyond me to sell one or both of these trees. 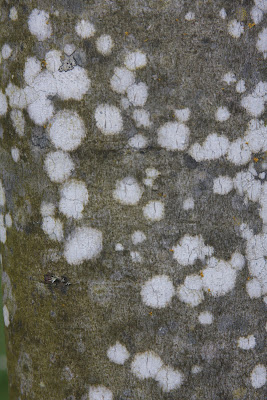 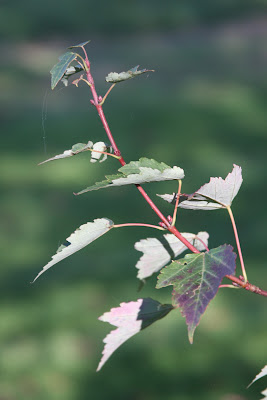 A relatively unknown Acer species in this garden is Acer pycnanthum. My two trees look rather like the similar Acer rubrum, except that the leaves are a bit smaller, and pycnanthum will also not get as large. It is not rare in Japan, but not plentiful either, and comes from low elevations in humid hills. In spite of that, pycnanthum (from pycnanthus, having flowers in dense clusters) grows fine in Oregon's hot, non-humid summers. One early-spring day I looked out my kitchen window and spotted a red Cercis--or something--in bloom. Strange, for there are no Cercis, or "Red Buds" in that area. Ah, as I went out to investigate, it was the red flowers of the pycnanthum, which bloom "precociously," meaning on bare stems before the emergence of leaves. 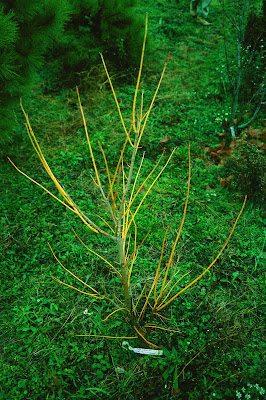 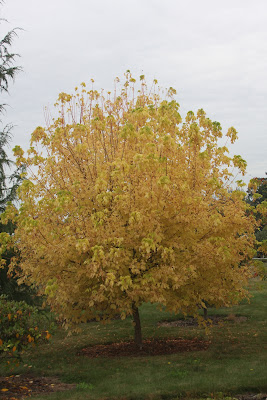 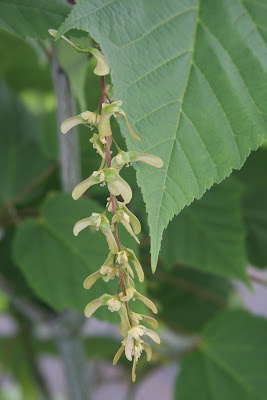 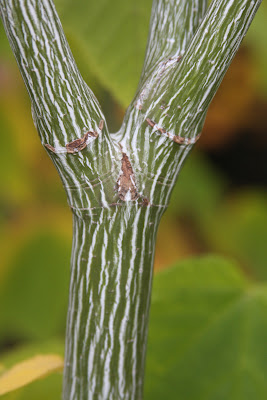 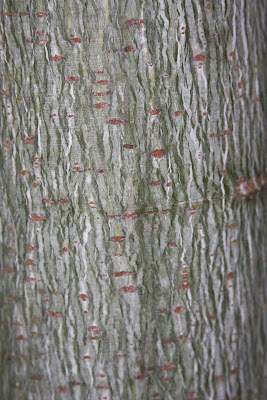 A couple of medium-size maples are beginning to crowd their neighbors. Acer negundo 'Winter Lightning' is a wide-canopy "Box Elder" with light green leaves in the spring. They have turned to yellow-green after our 100 degree days, and then will become brilliant gold in the fall. The best comes in winter when the bright gold bark shines in the landscape. Another tree I have underestimated for space is Acer pensylvanicum 'Silver Fox'. The "Moosewood Maple" of northeast America is hardy to -50 degrees, which seems absolutely amazing. 'Silver Fox' is pretty much like the species, and I remember how large pensylvanicums got when I visited Arboretum Wespelaar in Belgium last fall. 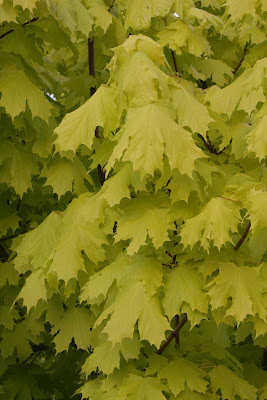 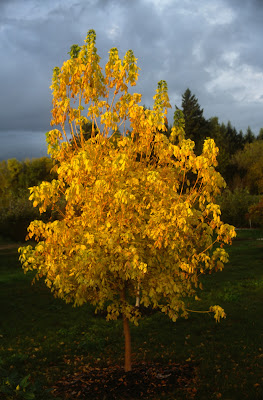 A cultivar of "Silver Maple," Acer saccharinum, will also grow to troubling size in the not too distant future. 'Born's Gracious' features bright green leaves that are finely dissected, which provides a soft feathery aspect to the landscape. 'Princeton Gold', a platanoides cultivar, also huge, commands attention with its rich yellow foliage. It should be grown in full sun, otherwise leaves will be greenish, and admirably it can withstand 100 degrees without burning. 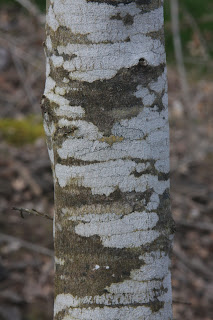 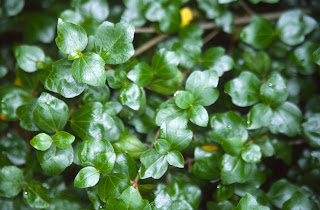 
Much smaller in stature--a shrub really--is Acer sempervirens, the "Cretan Maple." Leaves are tiny but cheerful, like miniature "Trident Maple," Acer buergerianum. The species is native to Mediterranean areas, and is evergreen (hence sempervirens) where mild. My tree mostly defoliates in winter, which is just as well, for "evergreen" broadleaf trees can look shabby in Oregon. 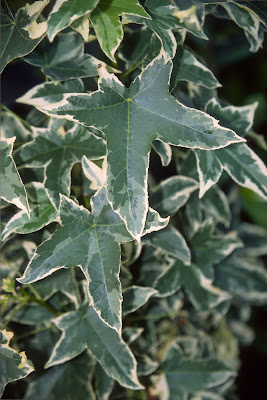 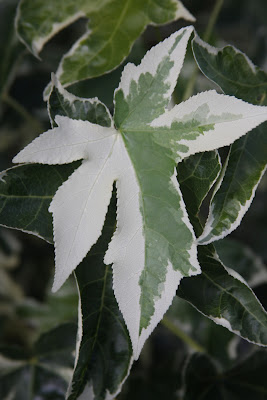 
Acer-like are a couple of variegated "Sweet Gums," Liquidambar styraciflua 'Golden Treasure' and 'Silver King'. Both of these cultivars, though very different in color, feature a bold style of variegation, where seemingly no two leaves look the same. For some they are too wild and gaudy, reminding them of Acer pseudoplatanus 'Eskimo Sunset' (AKA 'Esk Sunset'). Plant snobs probably don't care for any of the above, but I'm a plant snob, and I like them all. It's my garden anyway. 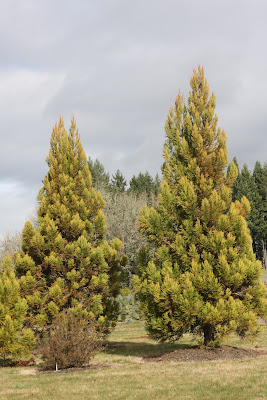 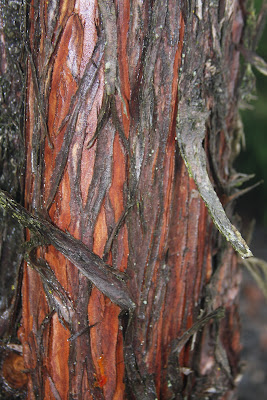 Rhododendron bureavii, one of my favorite species, sits protected on the shady side of a group of Cryptomeria japonica 'Yoshino'. Nearby is a most curious plant, Cotinus coggygria 'Young Lady', which displays no leaves in August, for the plant is completely smothered in smokes. 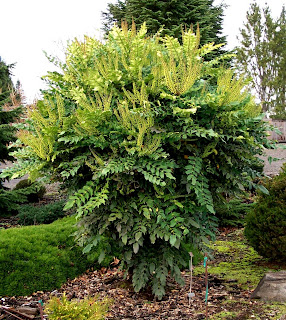 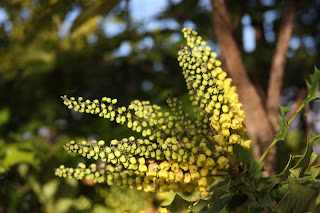 
I should stop, even though I haven't mentioned 90% of the trees in this Acer garden...but, but just one more: Mahonia x media 'Arthur Menzies'. This hybrid was selected mainly because it survived a cold winter at the Washington Park Arboretum in Seattle. They can look ragged until new growth appears, but I love the fact that they can bloom at Christmas. Corky trunks are interesting on older specimens. This Mahonia was named after Arthur Menzies of the Strybing Arboretum in San Francisco, for he sent seeds of the cross to Seattle.

Enough. Enough of this garden. It's not really a garden though, is it? It's a collection, an accumulation of what's still vital, and what should have been dumped long ago. I've mentioned previously about my "Noah's Ark Syndrome," where I had to possess at least one of every plant, even when I wasn't producing it for sale. It was a rich man's hobby on a poor man's budget. Grooming these "Upper Gardens" is always the last priority for Buchholz Nursery. There are times when a month goes by that I don't visit them. When I do, half of my energy goes toward appreciating the plants, while the other half frets about the work to be done. I hope you enjoyed the tour however, and we may visit another section in the future. 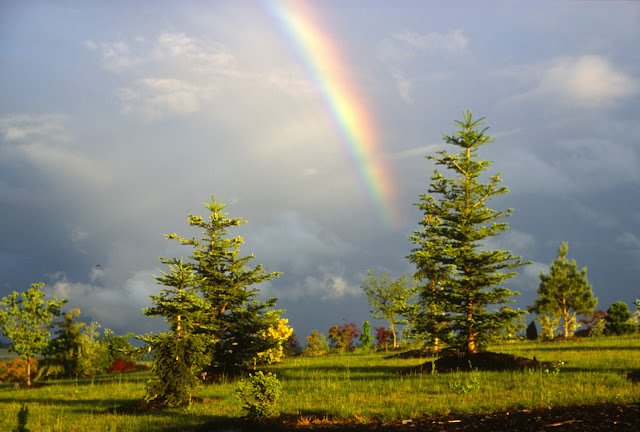