The interns? Ah, the interns, the Buchholz Nursery interns! They are so-called because when you tire of them, then you "turn" them in. Ha!, a weak Buchholz joke. The only problem is that some you never want to turn in; some you want to keep forever, adopt, leave in your will, marry if necessary.

We have had interns, or "trainees," for 25 years, and they come via various visa-producing organizations such as Ohio State University, IFAA (International Farmers Aid Association) and others. We treat the trainees humanely, respectfully, patiently etc...and then eventually we see just who we get; i.e. somebody who is happy and hard working, or sadly, in some cases, those who are not. The first intern was Harald from Germany, who was wonderful, so we continued with the adventure. Some others have been spat upon, kicked and ultimately canned, or should I say shit-canned?

But this year we have two goodies, two girls who have made it onto the "A-List," two girls who will bawl when they leave, and so will we. I present: Mayuko from Japan and Dryelle from Brazil. Very different, but they complement each other, and appear to get along very well. As you can see from the photo above, I have managed to position myself in-between, as I will always pose with pretty girls.

So today's blog features their autobiographies, with [sic] applying, because it reveals their cute efforts with the English language. They're such sweet girls, and we definitely lucked out this time. They have included a few of their own photos to tell their stories.

Hello, My name is Mayuko Nakato. 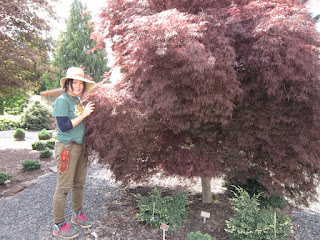 
About work
I came to U.S.A as this nursery’s trainee on the end of April.
contents of work: potting, trimming, cutting, weeding, sweeping…


About my hometown(Okayama)
Appeal point
The most sunny days in Japan . Mild climate. Less disaster.
Fruit is good
Natural sea, mountain, 3 of large rivers ...  country wealthy in natural resources
…So Okayama is nice for agriculture


About University(Okinawa)
Appeal point of Okinawa
The most beautiful sea in the world
People is warm-hearted and kind
Leisurely. Peaceful..I were always sleeping with opened the door and windows.
In this Okinawa, I study about agricultural engineering like a irrigation system, dam, landscape of an agricultural village, disaster(landslide)…
I belonged volley ball club

I’m glad to come here, because when I was kid Japanese Maple is very close to me. And I can study about plants(apples, conifers, other rare plants) and American agriculture and culture and so on. Everything is great experience for me. I love Oregon!!!
Thank you. 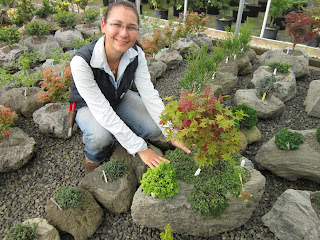 I am the Brazilian Buchholz & Buchholz trainee and my name is Dryelle Sifuentes Pallaoro. I study agronomy engineering in Mato Grosso Federal University (UFMT). This is my last year in college and I decided make something different for my TCC so, I came to the US for live this experience.

On Buchholz & Buchholz Nursery I learn about maples and conifers and their management. I work on several activities since weeding to cutting propagation.


My thoughts about American techniques - my first expectation - was opposed the idea that I have now. I could see that while there are similarities with the Brazilian system we also have many differences, but this is not the most important thing...


The most important thing is based in my personal growth. I'm learning about valuing human and how good relations are indispensable in personal and professional life.


Furthermore I live in my host's house with his family and the Japanese trainee - Mayuko. At the same time, I learn about American and Japanese culture what is very interesting. We always do stuff together like play, talk, dance, cook, swim… and, one of the coolest things was go to "Mt Hood" where I knew the snow.

The weather in Brazil is mostly tropical so, snowless... especially in my city, Cuiabá, where we have usually 100ºF. To refresh we can visit the "Chapada dos Guimarães" - 50 minutes from Cuiabá - a National Park with 487 waterfalls or we can go to "Nobres" - 1hour and 30 minutes from Cuiabá - the limestones’ city that has the blue pond.

I can stay hours and hours here talking about our natural beauty but is very easy, you can type on Google and find everything, but maybe, you will not find about how the people are happy and cozy and I can say that I really love my country in this aspect. How about spending your next vacation in Brazil?

On October I'll come back home and I'll take the good things with me... I feel that I'll miss them (Buchholz and Mayuko) but at the same time I'm happy because this means that I could make real friends.

I will add to their stories, as they do not give themselves enough credit. Mayuko appeared rather bewildered when she first arrived, but so would have you. Work was physically challenging, and the language barrier was enormous. She has been immersed in botanical nomenclature as well as English and Spanish from some of her co-workers. It's not obvious for a newcomer to even understand why we pot, prune and move plants around. She stumbled into an atmosphere of rapido, where everyone worked twice as fast as she did. But I'm happy to report that she is catching up. She has learned many plant names and even has some favorites. My children love her dearly, and the only problem with that is that they pester her constantly.

Dryelle--do not pronounce as "dry," but as "dree," as in tree--comes from the cowboy lands of eastern Brazil. She is a university student, and her internship here is a project-related requirement. Never before have I seen a 22-year-old who is so poised, alert and calm, but then can burst out laughing with her entire being over something silly. It's fun to be around someone who appreciates life, with all of its different people, and Dryelle adds happiness to all who meet her. I should also mention that she is Brazil's horseshoe-throwing queen, and has never lost a contest.

There you have it: old man Buchholz with a house full of women. It's all out of balance, but I definitely love it.
Posted by Talon Buchholz at 1:11 PM