Last week we were overwhelmed by the beauty--but also the odor--of greenhouse 20. Today's web log will be fairly devoid of smell, but the beauty will not be lacking. Again, this greenhouse is a collection that nobody can comprehend in just one visit. Amazing things happen every day of the year, but of course the spring flowering is the highlight.

The first plant one encounters at the entrance is the tropical "Trumpet Tree," Tabebuia chrysantha. This is a wide-spreading evergreen that blooms in March with a profusion of mustard-yellow flowers. We prune it hard just  to keep it in the greenhouse, for it's old enough to be three times as large. Actually, I don't really want this tree; it's not hardy to plant outside, and it takes up so much room. But seed was originally given to me by a sweet intern who worked here twenty years ago. Sandra K. was a pretty, fully-Japanese girl who was raised in Brazil. Her father's nursery grew only one plant, Tabebuia. She took home some Acer palmatum seed from our gardens, and felt compelled to reciprocate with the Trumpet tree. So I keep it in her memory, but I lost contact with her years ago, and by now I assume she has nearly-adult children. 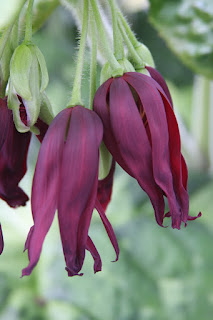 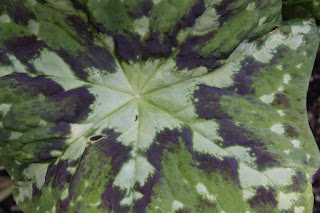 Next to the Trumpet tree is a fun display box. The main feature used to be various pleione cultivars, but now it is dominated by a huge "May Apple," Podophyllum 'Kaleidoscope' which sends up runners throughout the box. The Pleiones are still there, as evidenced by the recent photos above, but the competition is fierce. They also bloom in March; and on March 24th, ten years ago, my wife and I celebrated our marriage with a Pleione display. The 'Kaleidoscope' should never have been planted here, as I'm forever cutting it back, but its dangling flowers are an intriguing, but somewhat creepy blood-red. 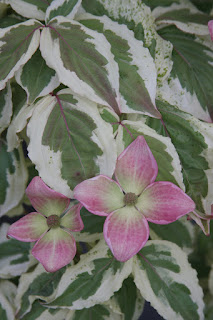 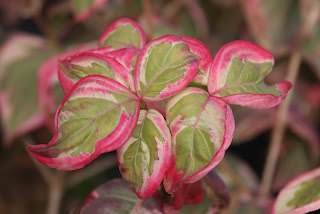 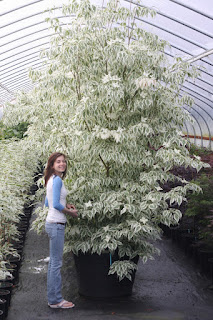 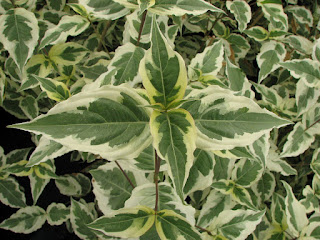 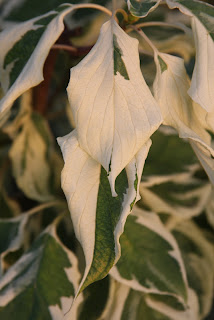 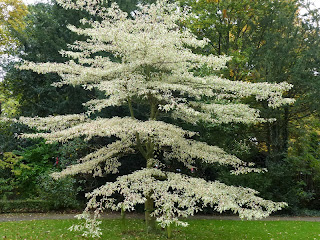 
A few cultivars of Cornus are in GH20, though they don't really need the extra heat--but they sure grow fast in there. Cornus kousa 'Akatsuki' has reddish flowers with white and green variegated leaves. They sell easily although they're awkward growers, and I don't like the variegated leaves nearly as much as our Cornus kousa 'Summer Fun'. Cornus controversa 'Variegata' can also grow awkwardly, but at maturity it forms a formal pyramid with horizontal branching. Do you remember last year's web log from the Arboretum Trompenburg in Rotterdam, Holland? The photo above is their large specimen, taken on a gloomy rainy day, and what a splendid glow it gave to the soaked garden.


Take a look at another dogwood, Cornus alternifolia 'Saya'. This delightful cultivar originated as a branch mutation on an otherwise green seedling, just like our kousa 'Summer Fun'. The variegation is obvious and attractive in spring and summer, then exceeds expectations in the fall. It was named for my daughter, whose Japanese name means a "field of flowers." If I could clone my child, I'm certain that every family would want one. 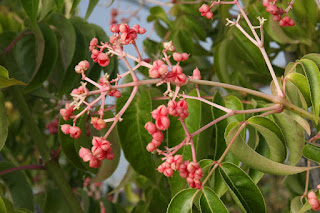 
Speaking of sweethearts, one seldom encounters the "Sweetheart Tree," Euscaphis japonica in American collections, but I wouldn't be without it. This is a monotypic Asian species which forms a large shrub or small tree. The long pinnate leaves consist of seven to eleven leaflets and are glossy green. The yellow flowers are not spectacular, but the autumn seed pods are pinkish-red with blue-black seeds, and are very ornamental, like some of the Euonymus species. A Portland-area gardening guru with a radio program, one who makes a living snooping in and writing about other peoples' gardens, and one who knows a heck of a lot about plants...this Mr. D. first fell in love with Euscaphis at Buchholz Nursery and just had to have one, although he probably had no idea where to shoehorn it into his garden.


The "Dove Trees," Davidia involucrata, feature wonderful flower bracts, drooping handkerchiefs that are admired by even the non-gardening public. A couple of new cultivars, 'Aya nishiki' from Japan and 'Lady Sunshine' from Oregon have strongly variegated leaves and command attention from the full length of the greenhouse. 'Lady Sunshine', the more white of the two, surprisingly takes full sun better than 'Aya nishiki', but still both cultivars benefit from afternoon shade. 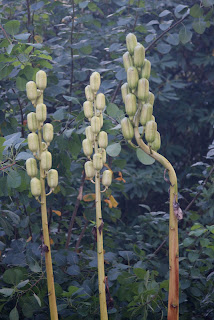 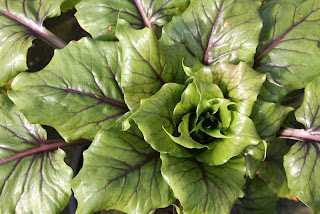 
Cardiocrinum giganteum, the "Giant Lily," is native to the mountains of central China. I find that many of the most interesting gardens of the world will have a patch of them, left to naturalize. Flower heads can rise ten to fifteen feet with strongly scented trumpet-shaped cream-white flowers. Seed pods are attractive in autumn, and they last forever when dried, shown above with our watermelon man, in the bathroom. The best patch of Cardiocrinum I can recall is in the Asian garden of the University of British Columbia, but I've stayed away from Canada for quite a few years due to the imperious little bastards at the U.S. border--our agents, not Canada's--who have me on their watch list apparently (for no reason), and they search and make me wait for an hour, the seat surely bugged and cameras rolling. I never have anything and I never will, but I sort of feel guilty anyway. 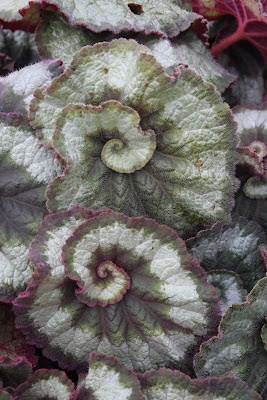 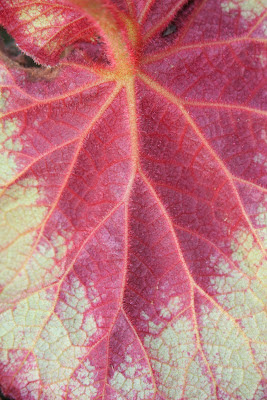 
Begonia 'Escargot', while not showy for flowers, features huge leaves with a snail-like spiral. The reddish undersides are interesting as well, but you have to lift them to view. We used to propagate it, then I discovered it was patented--oops--but I still keep a couple around for fun. 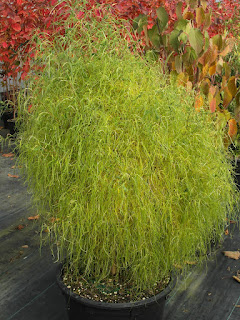 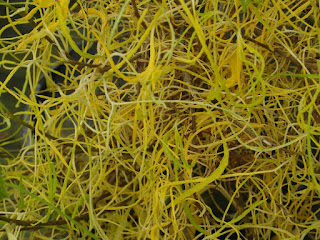 I appreciated my first encounter with the "Silver Tree," Leucadendron argenteum, a dozen years ago at the Strybing Arboretum in San Francisco, and also at the Santa Cruz Botanic Garden, so I purchased one at a Santa Cruz retail outlet. I'll keep it in a container in full sun, but in winter it must be protected. Next to the "Silver Tree" is Morus 'Nuclear Blast'. The name is perhaps not amusing to the Japanese, but it does look like a mushroom cloud. Curious slender long-lobed leaves are light green in summer, turning to orange in fall. I don't ever recall seeing it flower. "That's wild" is the comment often heard when visitors first see this "mulberry."

Pseudopanax crassifolius was featured in April's The Skinny web log, and of course it resides in GH20. Passiflora caerulea likes to wind around anything it can, and my then-girlfriend Haruko blushed when I told her it was a "Passion Vine." Surely she thought I was up to something. Actually the name refers to the passion of Christ, for a cross-like element to the flower; but Haruko was right: I was up to something. I saw a white form in England years ago, 'Constance Elliott', and I just need someone to tell me where I can buy one. 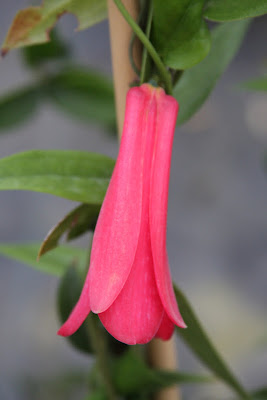 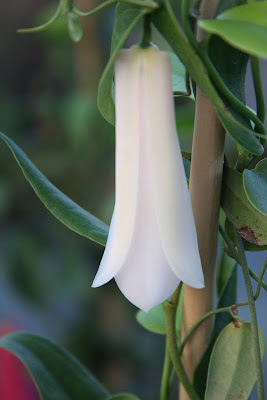 
Another winder is the "Chilean Bell Flower," Lapageria 'Rosea'-- the national flower of Chile. It was introduced into Europe by French botanists and honors Empress Josephine of France, also known as Tascher de la Pagerie. Our seed was gathered in Tasmania, and the difficult-to-establish seedlings display white, pink and red flowers. Once the vine gets going, it can climb to thirty feet. Our plants can bloom in various months, with November-December being the best. 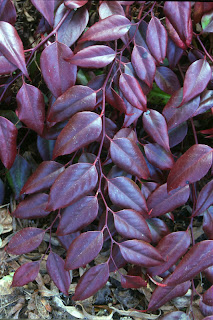 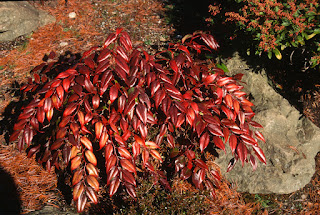 
A wonderful low spreading shrub is the evergreen Leucothoe keiskei, a Japanese native. The evergreen leaves are glossy-green in spring and summer, then turn a fantastic copper-plum color in autumn and winter. The white flowers don't do much for me and I grow it for the foliage alone. In England it received an Award of Merit in 1933, but I don't recall seeing it in English or American gardens.

One fabulous new foliage plant is my newly acquired Pieris japonica 'Katsura'. This amazing plant was discovered in Japan, and is hardy to -20 degrees, USDA zone 5. New growth is deep wine-red, which contrasts with the older green leaves. Flowers are a light rose color, and it can be grown in full sun to partial shade.

There are dozens--or hundreds--of other interesting plants in GH20, but I don't want to indulge the reader with more of my thoughts. I'll exit, leaving you with a few more photos. Plan your visit to GH20 for the end of April to the middle of May. Some flowers will be finished, but others just begun. 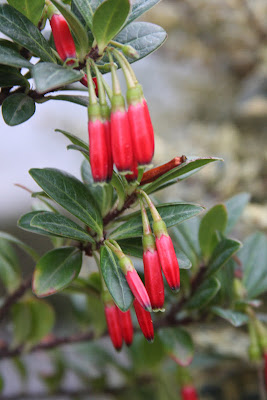 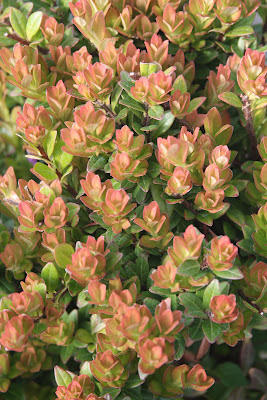 Posted by Talon Buchholz at 4:07 PM