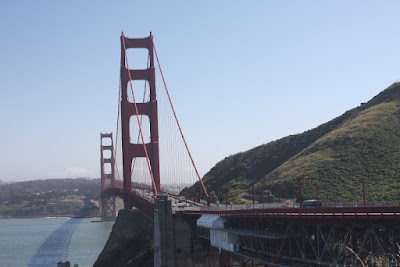 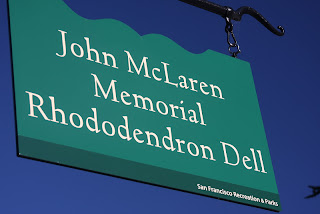 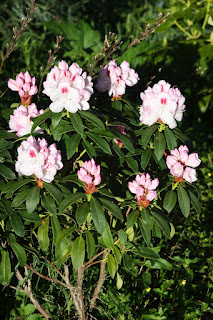 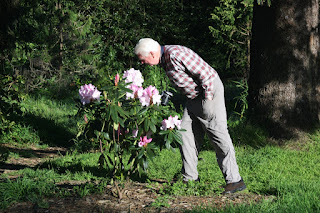 Reuben Hatch with a Rhododendron hybrid

We started early, up the coast on a beautiful Saturday morning, but also into the congestion of San Francisco. The sun was bright and the girls were parading in Golden Gate Park in skimpy outfits. Our focus was on plants, of course, not on gorgeous, sunbathing California women. Our first stop was the John McLaren Rhododendron Dell. This garden is where my companion, plantsman Hatch, got his inspiration to collect Rhododendrons...which led him to growing them for a living in Vancouver, Washington--indeed: to supply Rhododendrons "for the discerning gardener." Those who have visited my display gardens (if you are discerning, anyway) must have noticed that I have a small, but excellent Rhododendron collection, all via the discerning Mr. Hatch. The Dell has changed dramatically over the years (I'm told) as many large species Rhododendrons have been ousted in favor of hybrids, hybrids which often can equal, or outperform the parents, just as my children have done.

This was a nice, short excursion...but now to the Strybing Arboretum, a garden I have been to about (?) ten times. But wait! The gates weren't open yet. It used to be that you could walk in at sunrise and exit at sunset for free, but now one had to purchase a ticket, due, as the ticket vendor said, "to the corruption and ineptitude of city officials"--a cross reminder of who isn't serving who, when they should be serving us, at all levels of government. So we lolled the time at a pungent, trendy coffee shop a few blocks away. 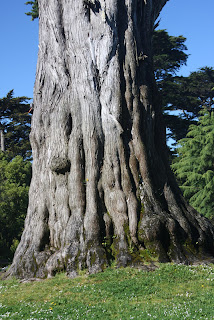 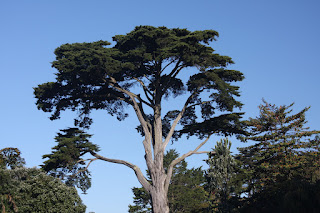 Later, I snapped a photo from outside the Strybing gate, a photo of its signature tree, the huge Cupressus macrocarpa. Finally, like kids in a toy shop, the gates opened and we burst into the collection. Yes, a collection; but unlike mine (Flora Wonder), a wonderful landscape as well as a collection. A place that suits everybody: joggers, moms and kids, Chinese morning exercisers, single people walking, as well as the arborist, the professional landscaper, the botanist, or the nurseryman like myself. Enough with coffee--let's see the trees!


Turning right I could see Rhododendrons in bloom. We were too late for their famous Magnolia campbellii 'Pink Form', but its trunk was attractive. 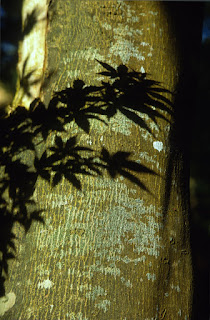 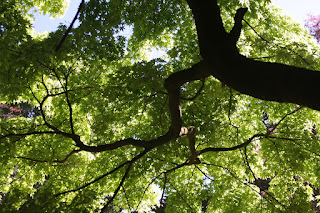 The Strybing has a few interesting maples, but apparently cultivars are not a focus. Non-hardy (for me) species such as Acer morrisonense, a "snake bark" from Taiwan, and Acer skutchii, the Mexican sugar maple looked healthy in San Francisco, as did Acer laevigatum from China and Acer kawakamii, from Taiwan and China. There is a small group of green seedling Acer palmatum, and years ago I took a photo of a branchlet's shadow on the gray palmatum trunk. Now the trees are huge and it's virtually dark inside the grove. The palmatum species is obviously hardy for me; and so is Acer mono, here with new chocolate-colored leaves. We grow only one cultivar of Acer mono (or Acer pictum): 'Usugumo'. One other maple to mention is Acer griseum, the "paperbark maple." Er, wait a second, that's not a maple; it's Rhododendron parryae from Assam, with the most griseum-like bark. 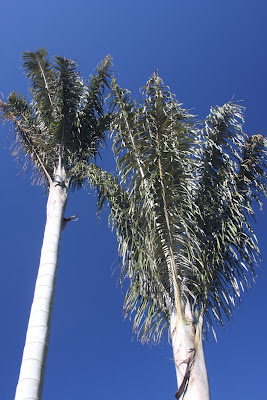 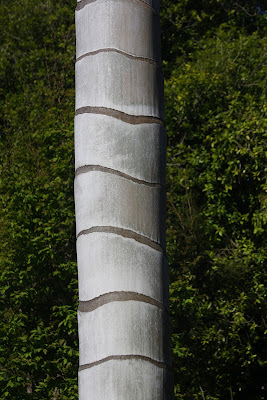 Speaking of bark, the "Andean Wax Palm," Ceroxylon quindiuense--this time spelled incorrectly with two l's--had shot further into the sky since my last visit, three or four years ago. But I searched in vain for its companion, Ceroxylon hexandrum. An interesting group of trunks turned out to be just one tree, Laurus nobilis, the "Sweet Bay," an aromatic tree from the Mediterranean. This is the laurel that the Greeks and Romans put atop their heads, and that they eventually hoped to rest upon. 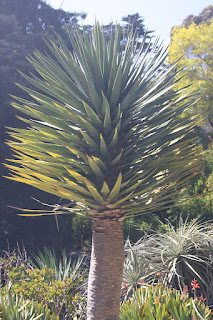 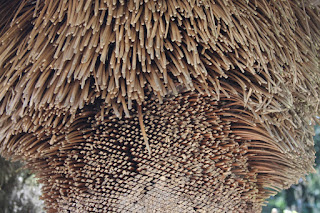 Luma apiculata displayed warm, cinnamon-colored bark. Cyathea cooperi, the "Australian Tree Fern," had a fascinating trunk pattern. Mahonia duclouxiana from China was a prickly blob above, but featured a nice trunk, similar to Mahonia siamensis. Upon further review, these two are the same tree, just a different name this time. The "Grass Tree," Xanthorrhoea sp. from Australia was interesting from top to bottom. 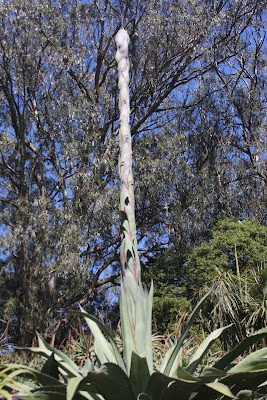 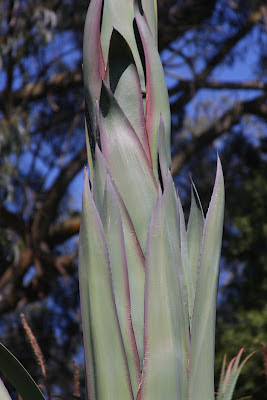 I always enjoy the Agave-Puya-Aloe-Aoenium section, but many of the labels were missing, or rather, I didn't want to fight the foliage to find them. Please excuse any nomenclatural mistakes, as I'm just the visitor. 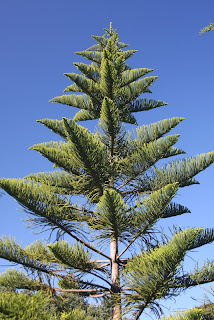 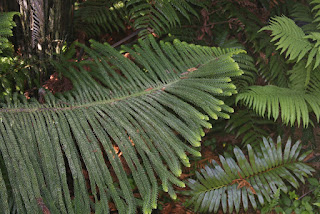 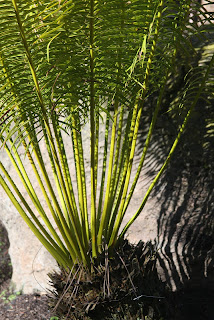 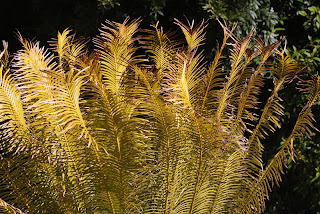 Eventually we came to the "prehistoric section," one of my favorite places. The boardwalk leads you around Gunnera, Araucaria, ferns and horsetail etc.--all evocative of earth's incredible past. 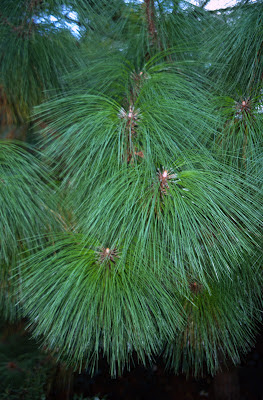 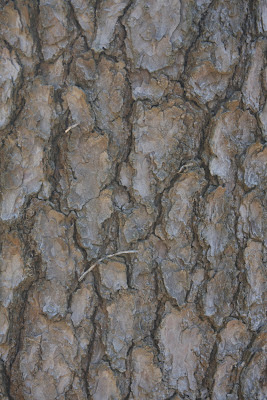 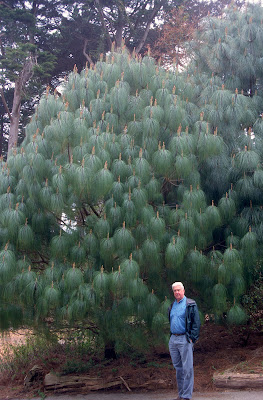 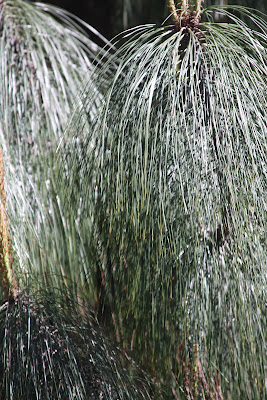 Some sections of Strybing looked great and well-tended, while others were in need of attention. There used to be a wonderful collection of Mexican pines, but only a few were left. Pinus montezumae is a favorite for lustrous, long pendent needles and attractive bark. Another pine, Pseudostrobus var. apulcensis is as beautiful as any, and I have seen it in the wild. I was looking forward to others, but many had been cut down.

We wore ourselves out quickly today; it was hot and we're both older. Still, my grandfather did treat me to a visit to the Legion of Honor Art Museum, and there were many nice things to see, but I won't go into that now. We took the route around the Bay which was beautiful but traffic jammed. Eventually we reached our final destination, Flora Grubb Gardens. 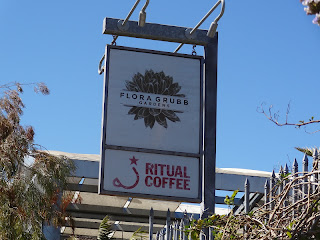 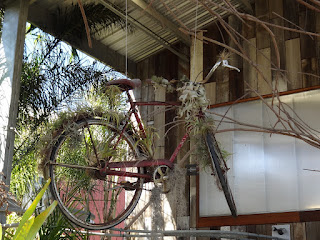 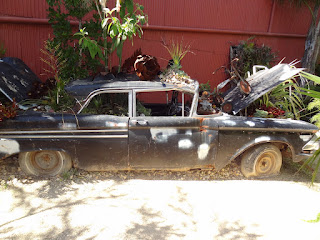 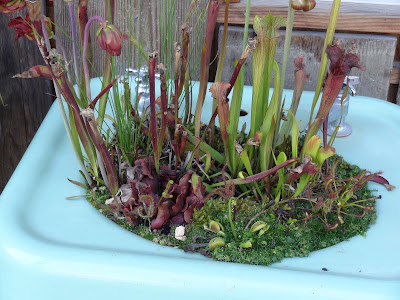 Flora Grubb is a real person, as her website explains, really named Flora Grubb. She owns a most interesting retail nursery, but "Gardens" is a very appropriate description of what you find. Plants are arranged in wonderful fashion, into little vignettes full of goodies. The grounds are of modest size, but Flora increases her space with vertical creations. A bicycle was hanging from the ceiling, with air plants growing on it. An old car was decomposing in the corner, also festooned with plants. Where better to grow bog plants than...in a sink? My favorite was the wall of chairs, an artful presentation using "free room." 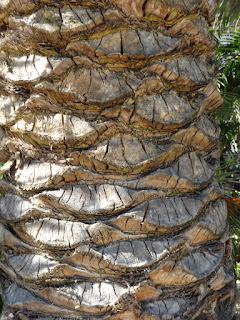 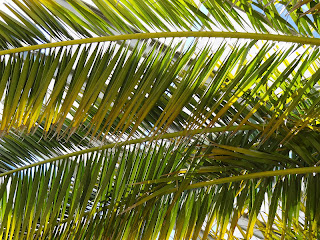 The nursery had a good selection of Agaves, succulents and the like. I was impressed with the trunk of a large Phoenix canariensis, but the most amazing (by far) trunk belonged to another palm, Trachycarpus fortunei. I've seen my share of "Windmill Palms," but never recalled a barber-pole trunk before. Thanks to employee Clarke for identification on the palms, and also for pointing out a luxurious Fuchsia from Ecuador. 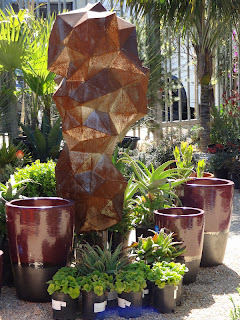 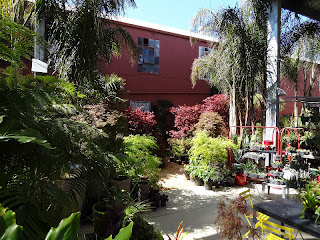 I was pleased to walk through a beautiful group of maples, high quality trees at reasonable prices. All right, they all came from me. I'm happy that Flora is spreading maple fever throughout town. One last look around: at sculpture, hanging chairs and bicycles in the air. The next day back to our own gardens, refreshed, and excited to see how much everything has grown and what is newly in bloom.
Posted by Talon Buchholz at 3:00 PM