...a short trip to California, with the main goal being a search for an albino form of redwood, Sequoia sempervirens. Allegedly one exists in a state park near Santa Cruz, next to the nature trail. Late April would be a pretty time to see a couple of arboreta, some nurseries, and public and private gardens as well. An old-timer, plantsman Reuben Hatch, pulled into my driveway at 6 AM, and before our conversation had hardly warmed up, we were already lying about our fruits in our lunches at the California border inspection station. 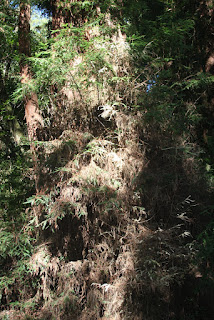 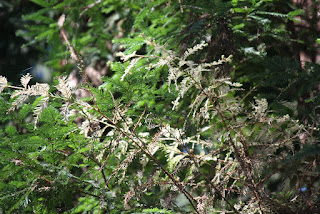 Well, the albino was found, but the scrappy thing was 90% dead. The thin white shoots had apparently perished in a hard winter frost, as I saw the same situation with some of the juvenile green trees. I snapped a few ugly photos and then tried to forget about it. Perhaps late summer would be the best time to visit, then maybe some new white growth would have a chance to develop.

Ok, heading back to Santa Cruz, we stopped at a small retail nursery where I purchased a tree on my old want list, Leucadendron argenteum, which was mentioned in last week's GH20 web log. Thence to the Santa Cruz Botanic Garden, which I had visited five years previous. For me and my business, this garden is mostly useless, as the focus here is Mediterranean and southern hemisphere plants. But it is an interesting fantasy-land of bushes and blossoms that adds to one's appreciation of the diversity of nature. I imagine the caretakers here would have an "out of this world" experience at my nursery as well.

Sadly, the garden has gone downhill since my last visit, like the funding well was drying up. I see that everywhere these days. Society bites off more than it can chew, with everyone at the time assuming that good inspirations will only get better. Budget cuts lead to more weeds, less labeling, less pruning etc. But still, there were many gems in the rough. 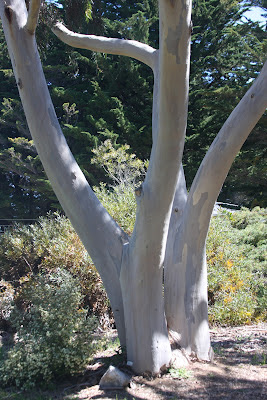 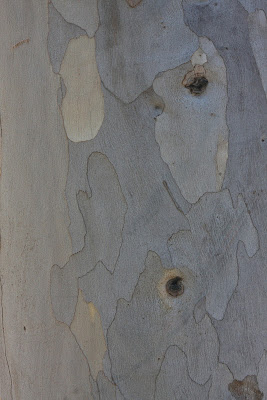 I have a love-hate attitude toward Eucalyptus. I love them, but only in somebody else's garden. The foliage is an ugly brown-green, especially this time of year, but the flowers can be attractive, flamboyant even, and of course, me being a tree-trunk man, the bark is often amazing. Eucalyptus haemastoma, from Australia, is well-represented, and even when growing crooked, the bark redeems the tree after all. This is sometimes called the "Scribbly Gum," due to the doodles on the trunk caused by burrowing larvae, but I didn't note that feature in Santa Cruz. 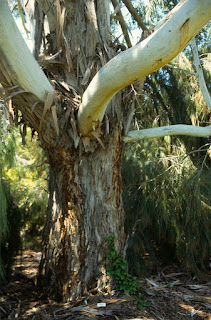 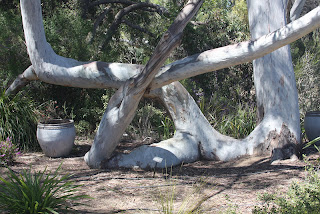 
Bark on Eucalyptus rubida displays colors from gray to reddish brown, and can become pinkish in winter. The six inch long narrow leaves are not as offensive to me as with other gums. Bark on Eucalyptus gummifera is gnarly like a cork-oak. Eucalyptus pauciflora is the "Snow Gum" and grows in highland valleys of southeastern Australia. Bark ranges in color from gray-white to what you see above, and I particularly like the Arboretum's muscular specimen. The only problem is that five years ago its label said Eucalyptus lacrimans. Wait...these are two different trees.

The only Eucalyptus flowers I could reach to photograph were on a dangling near-dead Eucalyptus caesia, but they were pretty enough.

Leucospermums and Leucadendrons: yikes, it taxed me to keep those genera straight, but we'll start with the Leucospermums, the "Pin-cushion" trees. The genus name is Greek for "white seed," and they come from South Africa. Leucospermum cordifolium is also known as Leucospermum nutans, or the "Nodding Pincushion," but the orange flowers at Santa Cruz stood rather erect. Leucospermum x 'Veld Fire' is a hybrid with a nice yellow-orange blossom ("veld" refers to an area covered in grass or low scrub in South Africa). This genus grows in warm climates around the world, and is used for exotic cut flowers which are often lumped under Proteas. 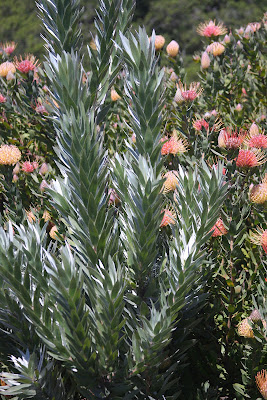 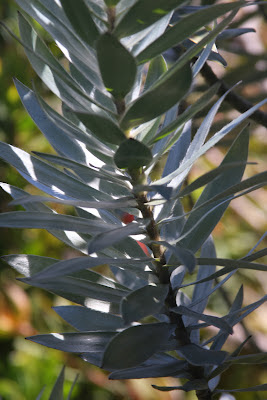 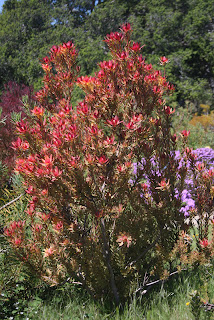 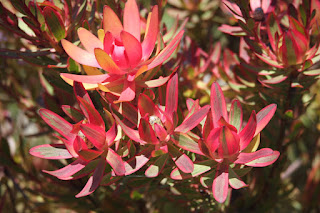 Now, to the Leucadendrons. Leucadendron argenteum is the "silver-leaf" species mentioned previously. It is considered rare on the slopes of Table Mountain in South Africa. Apparently they can only be raised from seed, so I guess I'm lucky to have one. A hybrid between Leucadendron salignum and Leucadendron laureolum is produced in New Zealand and elsewhere for cut flowers. I saw one such hybrid called 'Safari Sunshine' which was quite attractive. It will be confusing that there also exists a 'Safari Sunset'.

Leucadendron salignum is noted for reddish foliage and buds, and bracts with reddish tips, and the cultivar 'Winter Red' looked good five years ago, as well as today. Leucadendron muirii, Leucadendron coniferum and Leucadendron spissifolium ssp. fragrans were also encountered, but I can't offer any information beyond the photos. 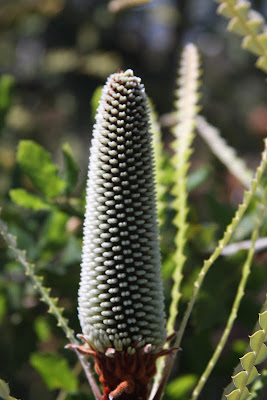 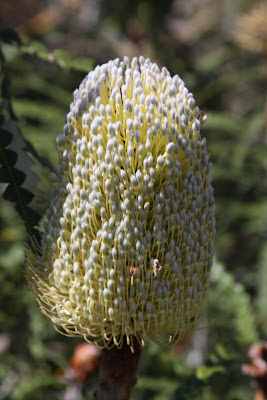 The Banksia were in flower. They are named for the English botanist Sir Joseph Banks who discovered them at "Botany Bay" (Sydney) in 1770. Banks has long been one of my heroes of the floral world, and I imagine he would have made good company on a long voyage, much more entertaining than his captain, James Cook. Banksia spinulosa is a short-growing species with erect cone-like flowers. Banksia coccinea is from southwestern Australia and is known as the "Scarlet Banksia." Banksia speciosa is the "Showy Banksia." It can get large, but I particularly like the zig-zag foliage. It too comes from southwestern Australia.


A couple of Ericas impressed me. The South African species, Erica bauera, or the "Bridal Heath," displays long tubular flowers that vary from ivory white to a soft pink. Erica cruenta, or the "Blood Red Heath," is also from South Africa. Both can be maintained as tight shrubs with pruning, but here they were leggy and flopping over. Still, the flowers looked great, especially when backlit.

The day was noticeably warming up, the sun was very bright, but still we wandered without aim, finding goodies that I didn't remember, or missed, from five years ago. An un-labeled Watsonia was sadly...without a label. I allowed my focus to blurrr...realizing that this trip would be lacking in knowledge and accomplishment, and instead would be one of random impressions and minor pleasures. For example, the genus Pimelea is one that I'll soon forget; I've never pronounced it before today, and I will never ever again. This "Rice Flower" from Australia contains at least eighty species of woody shrubs and belongs to the same family as the Daphnes. As you can see from the photos above, they are pretty enough, but they don't really stand out from all the other stuff in this collection. 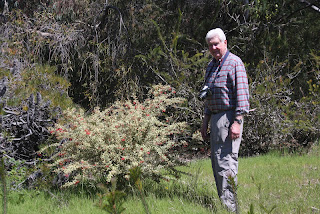 I liked the Cactus and Agaves and Aloes, but I have no experience growing any of them. If I lived in California I guess I'd try them, especially Agave filifera, 'Blue Glow' and mediopicta 'Alba'. Also Aloe plicatilis, Opuntia megacarpa and Echinopsis spachiana. Maybe even Grevilleas, which belong to the Protea family. Grevillea alpina, victoriae and the hybrid 'Moonlight' all caught my attention for one day, as did Protea neriifolia.


The flowers were unusually vivid, or maybe I was just hallucinating in the California sunshine. Dendromecon harfordii, the "Channel Island Tree Poppy" popped with yellow, Alyogyne huegelii seared with lavender, Cistus x aquilari gleamed with white, Arctotis 'Flamingo' gave me tropical vibrations, but nothing exploded with color like Lechenaultia biloba, which ultimately busted my camera.

So enough! Enough of this bizarre world and its wild colors and flower forms. We headed back up the coast to Half Moon Bay, within striking distance to the art and gardens of San Francisco, equally wild in their own way. Next week we'll visit the Strybing Arboretum, the John McLaren Rhododendron Dell, an art museum and a fantastic retail nursery. 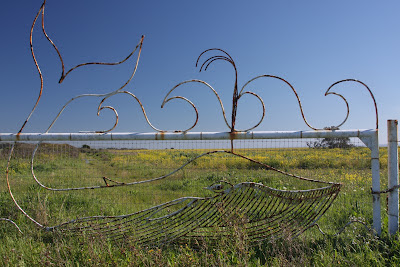 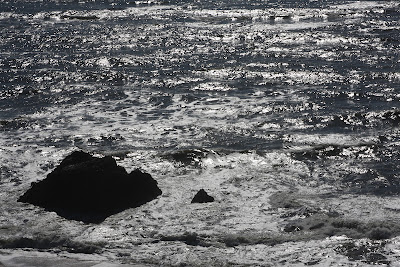 Posted by Talon Buchholz at 3:11 PM