The Naming of Names

The robins wake up at about 5:30 and so do I. Their songs sound rather urgent, like they have a lot planned for the day, and no time to waste. I feel the same, as every day could be the last. But every time I see a robin now, I chuckle when I recall the scientific name: Turdus migratorius. Turdus is Latin for a thrush, and I suppose the Romans had other names for shit.

I'm glad that my name is not Turdus; Talon Buchholz is difficult enough. My name is never said alone, but always requires the spelling, usually more than once. Occasionally attractive women will comment on what a cool first name I have, and then I'm happy to have it. If they're not attractive, then it's just an annoyance. Once I received a solicitation by mail, addressed to Buchholtz and Bucholtz Nursery, both spelled differently and wrong, and then "Dear Mr. Buccholz" which is also inkorect. Talon was a friend of my father. Buchholz is a common German name meaning bookwood or beechwood, and my father used to call me a son of a beechwood, while my childhood friends just called me TB. 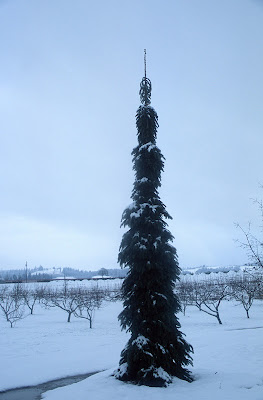 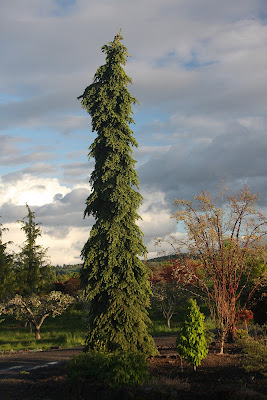 We all recognize that children have an easy ability to pick up languages. One wonders what the limit is--five or ten, or more? My youngest children are both bilingual, with Japanese being the dominant tongue. Add music to that too. When Harumi was two she would go for walks around the gardens with her mother. She wondered what the metal in front of the plants was for, and was told they were the plants' names. Her curiosity was abundant, and she quickly learned dozens of botanical names. Imagine a two-year-old spouting "Picea glauca 'Pendula', Ginkgo biloba and Quercus garryana" etc. Of course I was very pleased, while my older kids were certain that I had brainwashed her. But any child can do the same, to learn plant language with ease, and all of my current employees have done so. (Some ex-employees weren't as successful, and good riddance to them anyway).

I know some common names, like maple, umbrella pine and fir, which are not reliable in a professional setting; and it's simply best if we all speak the same plant language, whatever our gender, color or creed. Less chance for misunderstanding or misidentification. However, I wished I knew more common names, especially for our native flora. They add to the lore of the plant world, and our appreciation and understanding of it. But frequently so do the Latin names. Turdus migratorius implies that robins migrate, which I didn't know.

It's pretty obvious that Sequoiadendron giganteum is gigantic, but what's with the Sequoia part? "Sequoya"--I guess that's how he spelled his name--was a Cherokee native who created a notation for writing the Cherokee language. But he had nothing to do with the big redwoods, nor did he ever see one. It would be like calling a new plant discovery Billgatesii or Stevejobsii, or Wellingtonia, for that matter, which in the future would seem rather ridiculous. Why not at least name the redwoods for the native Californians, those who experienced the giants long before whites did in the 1800's?

I doubt that I'll ever discover a new genus or species, but if I did I could call it whatever I wanted. Turdus is already taken. Maybe Talonii erectus. Or consider J.T. Buchholz of the University of Illinois: he discovered nothing, but spent a lot of time in the herbarium. In the July 1939 issue of the American Journal of Botany he argued (successfully) for the generic segregation of the Sequoias, and is the author of the current name, Sequoiadendron giganteum. That is why you see Buchholz listed after Sequoiadendron giganteum in all plant references. He reclassified a number of southern hemisphere conifers as well, and thus immortalized himself in the annals of horticulture. 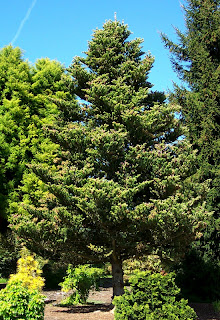 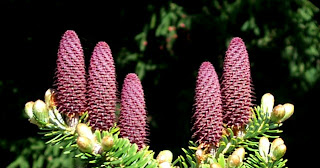 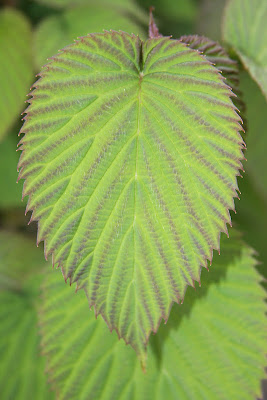 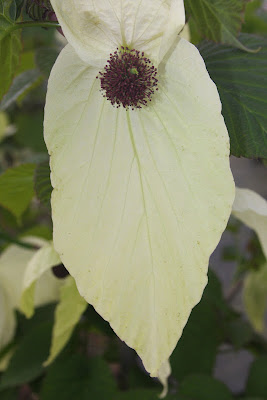 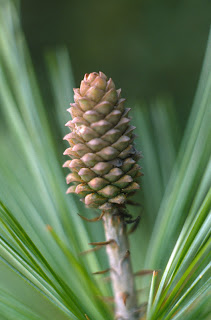 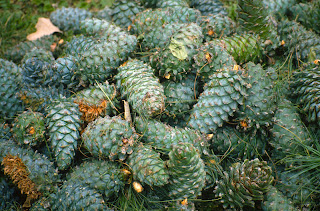 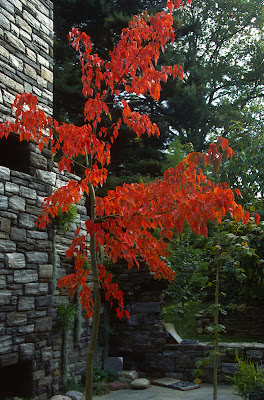 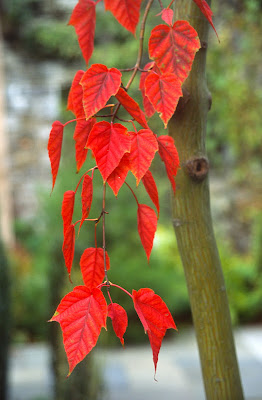 
It's interesting that some specific names describe the plant, as in giganteum; or the location of the species, as with Abies koreana. David Douglas thought the "Pacific Silver Fir" was "lovely," and so named it Abies amabilis. Davidia is the generic name for China's "Dove Tree," in honor of Armand David. As a priest, his mission in China was to convert the people to Roman Catholicism, but plants and animals were his forte. Acer davidii honors him, as does Pinus armandii. 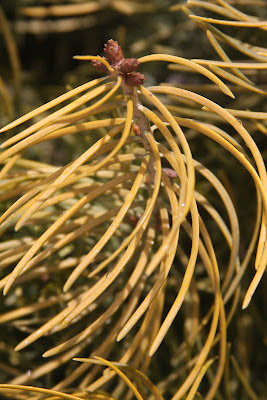 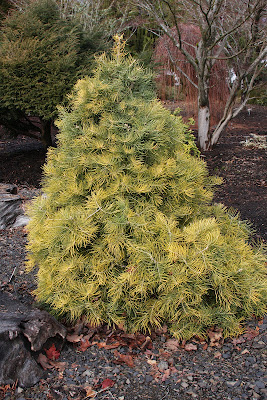 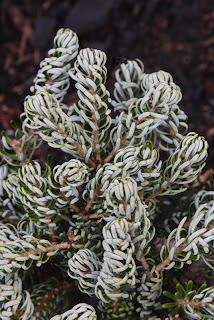 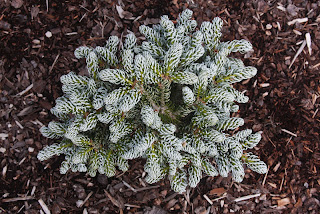 
I find cultivar names to vary from catchy and memorable, to amusing to disgusting. Abies concolor 'Wintergold' is a decent name and gets the job done, kind of like Abies koreana 'Green Carpet'. A better name is Abies koreana 'Ice Breaker', though I'm not sure what "ice breaker" is referring to. Of course the originator of 'Ice Breaker' prefers it to be called 'Kohout's Ice Breaker'. Not good. Acer palmatum 'Ikandi' is an amusing name, Acer shirasawanum 'Kawaii' is cute; but I threw away Pinus nigra 'Donkey Dick' because I hated the name, especially when you consider the way Europeans pronounce Pinus. 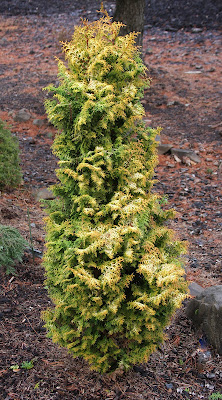 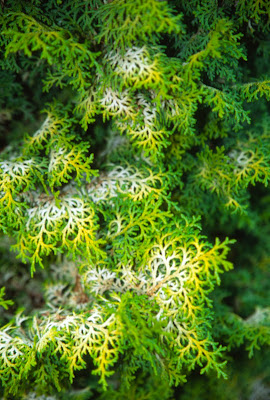 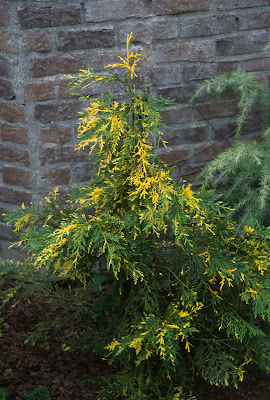 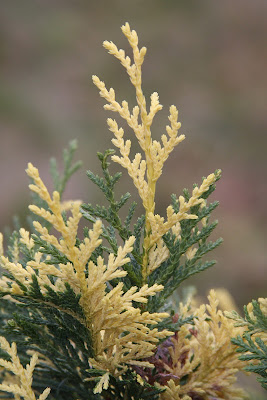 
Personal names for cultivars range from being good to absolutely horrible. Chamaecyparis obtusa 'Melody' is nice--everybody likes to say "melody." Chamaecyparis nootkatensis 'Laura Aurora' has a good ring to it. Sequoia sempervirens 'Kelly's Prostrate' is a great plant but a not so great a name, especially when a former female employee would get confused and call it "Kelly's Prostate" to customers on the phone.

We grow Acer palmatum 'Red Sentinel', also known as 'Twombly's Red Sentinel'. It was found as a witch's broom at Twombly Nursery in Connecticut. But who really cares about that, or about Twombly? Simply 'Red Sentinel' would be enough. I refuse to acknowledge "Twombly," I suppose because they still owe me money from twenty years ago. Acer palmatum 'Olsen's Frosted Strawberry' would be better as 'Frosted Strawberry', even though the late Mr. Olsen was wonderful man. His maple is wonderful too.


Let's consider one last cultivar name for a maple, Acer palmatum 'Manyo no sato'. Now that name doesn't easily roll off your tongue, or it doesn't for an English speaker anyway. It translates as "village of so many leaves," according to my wife. It connotes a good, peaceful feeling with the Japanese. Often a poem, especially an old poem, will evoke a pleasant, satisfied mood. When Yutaka Tanaka from Tsukasa Maples in Japan named 'Manyo no sato' in 1993, I don't know exactly what he saw or felt. Judge the photos above for yourself.

Similarly, "wabi sabi,” while not fully understood in the west, refers to a Japanese mood or point of view concerning impermanence or transition. For example, a feeling of melancholy seizes you when the Magnolia blossoms have fallen and are beginning to rot away. Nothing lasts, nothing is perfect. While this realization may possibly liberate you from the material world, still: damn, the beauty is over. Again, who knows what Mr. Tanaka was thinking when he named 'Manyo no sato'.

Well, this web log has wandered from Turdus migratorius to wabi sabi... and maybe  you got lost along the way. The journey reminds me of my Display Garden. It's packed with big trees and little trees, but the paths move ungeometrically, and the visitor is uncertain which route leads to where. If you come to a T in the path, turning left looks exciting, but what about everything that's off to the right? Plus, you see new plants that you didn't even know existed. All of the plants have labels, which can be considered as signposts to comprehending and appreciating my flora world. My life has not been a straight road, taken at a steady pace, and that's just the way I am. On the other hand, plant names have made the experience more wonderful.

A final cheer for this web log's title, The Naming of Names. I have plagiarized it from Anna Pavord's excellent book, The Naming of Names, the search for order in the world of plants. I agree with a reviewer that it's "an exhilarating new book [2005] from the author of the worldwide best seller The Tulip. Anna Pavord takes us on a thrilling adventure into botanical history..." Read it and you will never again take a plant's name for granted.
Posted by Talon Buchholz at 1:54 PM