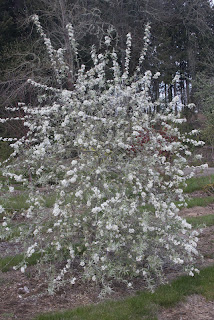 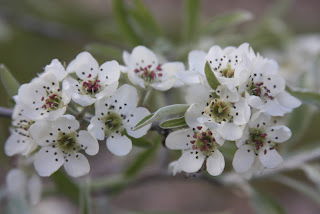 
I have a thing for long, thin lobes...on plants, that is. Names abound in horticulture to describe this feature, names such as "linearifolia" or "linearifolium" or "linearlobum." I am now looking out the office window at a Stachyurus salicifolia with its willow-like leaves, which reminds me that I also grow Pyrus salicifolia 'Pendula'. "Salicifolia" of course is Latin for "Salix-like." Maybe my favorite tree is Pseudopanax crassifolius, a New Zealand endemic with narrow blades over 18" long. Generally, thin lobes give a plant a delicate, airy or dainty look. My wife is narrow too, and the first thing I noticed about her--after her pleasant smile--was her thin, delicate fingers.

Acer palmatum 'Beni yubi gohon' was a plant I collected early in my career, and I propagated and sold it even before I knew what the name meant. "Five red fingers," like my wife's, aptly describes the leaves; so it now irks me when the cultivar is frequently misspelled as Beni ubi gohon. "Ubi" does not exist in Japanese. It also irks me when a certain foreign company exports it into American markets, not only with the name incorrect, but also with the plant incorrect. It should be a slow-growing selection with small, narrow red lobes, not a more vigorous maple with wide lobes. If you ever come across a cultivar with the name 'Red Falcon', that would be the incorrect 'Beni yubi gohon'. Some would suggest that I get too carried away with nit-picking detail, but I remember the man who popularized maples (in the USA) in the beginning, JD Vertrees in Japanese Maples...I remember him wagging his boney finger at me, and emphatically insisting that I don't "screw up the nomenclature." I've been dogged eternally by that man, and every time...when I realized that I've made a spelling or an identification mistake, I picture Vertrees somberly shaking his head in admonition. 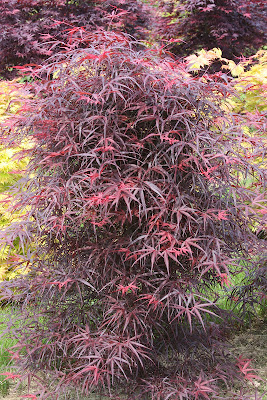 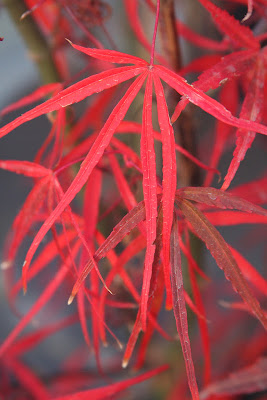 Today we have a dozen or dozens of red Maple linearlobums, too many I suppose, but each is different in its lobe size and shape, and different in the degree to which it holds its red color throughout the seasons. The first one I collected (via scions from Vertrees) was 'Red Pygmy', a cultivar we still have, but one that has been surpassed by many others. 'Red Pygmy', in Oregon anyway, tends to change from a pretty spring red color to a dull greenish red after the first hot day in summer. 'Hubbs Red Willow' and 'Pung Kil' hold their color much better, and are also more vigorous, while still forming small-size trees.


We also grow 'Ginshi', but be careful to not confuse it with the grass-green cultivar, 'Kinshi'. Another good red linearlobum is 'Beni otake', selected by the late Edsal Wood of Oregon, which translates as "red bamboo." 'Beni otake' is one of the larger-growing selections; it really is an excellent cultivar, and has effectively replaced the old 'Atrolineare'. 'Enkan', 'Red Cloud' and 'Red Spider' are also nice reds. Again, be careful, because while 'Red Spider' is a linearlobum, 'Red Spider Web' is a tiny dwarf laceleaf--very different. 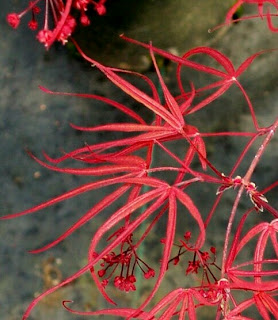 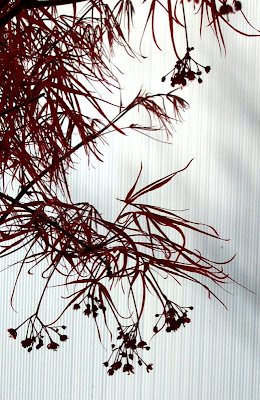 One of the most exciting moments at Buchholz Nursery occurred in the early 1980's, when a flat of seedling maples germinated (from the parent tree of 'Scolopendrifolium' from the late Dr. Corbin's garden). Most of the seedlings were green with normal palmatum leaves, but in one corner of the flat was an impossibly small mutant with the most tiny hair-like green lobes. Certainly it would never survive, or would it? Well it did, and later it was named 'Fairyhair'. In the 4th edition of Vertrees/Gregory Japanese Maples, the editor or somebody renamed it 'Fairy Hair'--two words--and, oh well, we changed the name too. In the same seed flat as 'Fairy Hair', a noticeably red linearlobum appeared. It also thrived and was later named 'Red Cloud', as the dense round form of a mature tree resembles a red cloud. What do you know?, when the two popular cultivars arise out of one seed flat.

'Fairy Hair' is the most dwarf of the green maple linearlobums that I grow. 'Kinshi', 'Koto no ito', 'Green Fingers' and 'Aoyagi gawa' are far more vigorous, with the old 'Scolopendrifolium' (aka 'Strap-leaf') forming the largest tree of the group. I saw 'Kansai koto no ito' in Japan, presumably a seedling from 'Koto no ito', but I do not grow it. I also have germinated seed from an open-pollinated 'Koto no ito'. Approximately 25% come up as red or green linearlobums, with the rest being reds or greens with a regular palmatum shape. The latter were used as rootstock, while most of the linearlobums were given away because I was overwhelmed with the tedious task of evaluating them. 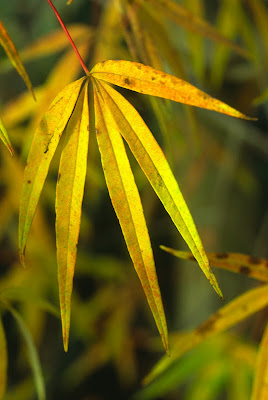 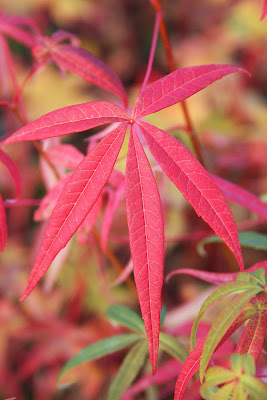 Acer pentaphyllum is a fantastic maple species, and now critically endangered in China. It can be propagated from seed, or from rooted cuttings under mist in the summer, or it can be grafted with, strangely enough, Acer rubrum as a rootstock. At one point there were more in my nursery than were left in the wild. For some reason the same plant can have a straw-yellow autumn color, or it can be bright red the next year. For you stoners out there, Acer pentaphyllum, at least from a distance, looks like marijuana (Cannabis) and our agricultural inspector did a goofy double-take when he first saw it. 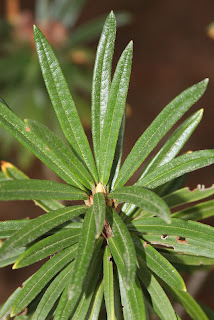 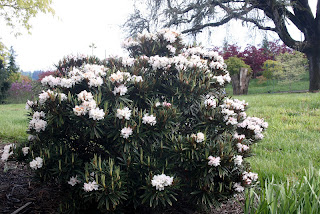 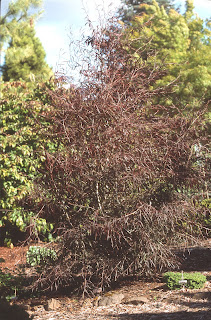 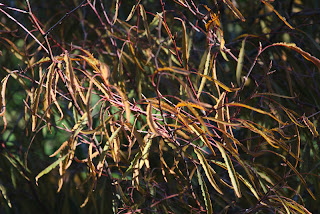 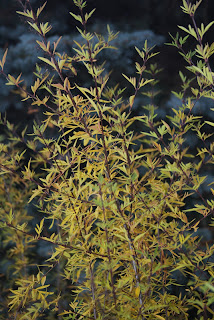 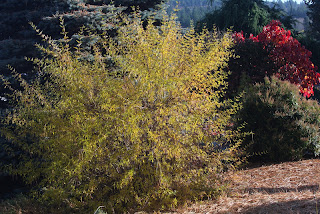 Two Rhododendrons feature narrow leaves, Rhododendron macrosepalum 'Linearifolium' and Rhododendron roxieanum var. oreonastes. Two "European Beeches" also are impressive, Fagus sylvatica 'Ansorgei' and 'Mercedes'. Syringa laciniata is a delicate, whispy species but is quite easy to grow and hardy to -30 degrees, USDA zone 4. And one of my favorites of all the Ilex species is Ilex fargesii. It looks attractive all year with narrow evergreen leaves, and is especially nice in fall and winter with red fruits. This Chinese species is seldom encountered in American gardens, but with fragrant white flowers in springs, berries in fall and beautiful foliage all year, I can't understand why it is so rare. Best of all, the leaves are spineless. Ilex fargesii was named after the French missionary, Paul Farges, and introduces into Britain by Ernest "Chinese" Wilson, then working for the famous Veitch Nursery firm. It is not rare or threatened in the wild, coming from a wide area in China, and when we next have them available, you would be a fool to pass them up. Hardy to -10 degrees, USDA zone 6. 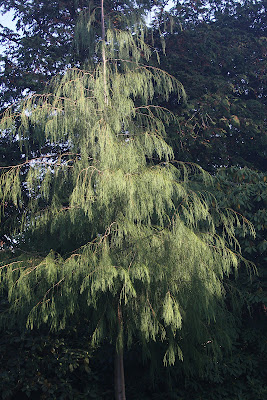 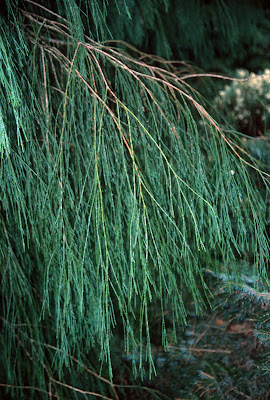 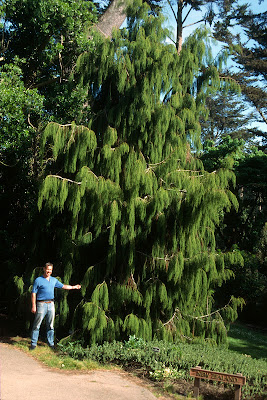 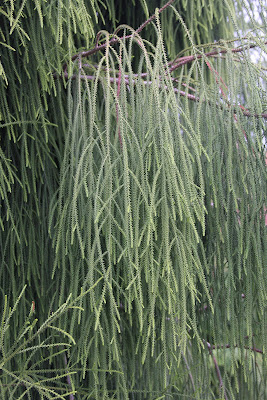 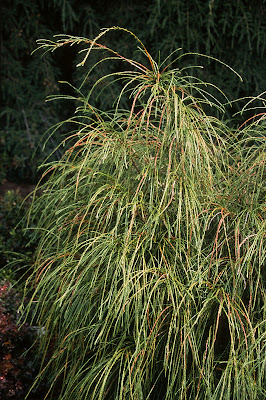 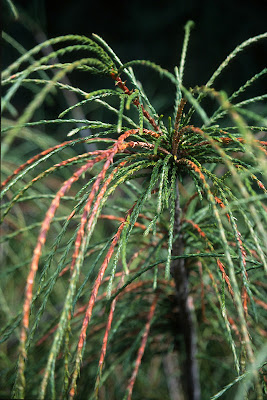 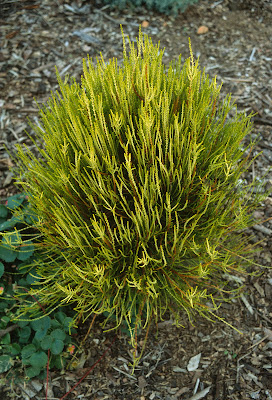 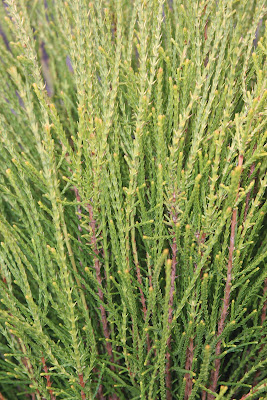 I'll conclude with some conifers. So what do conifers have to do with narrow leaves or lobes? Well, by displaying narrow dangling, or ascending, branchlets, they achieve the same effect of the previously mentioned plants. Chamaecyparis lawsoniana 'Imbricata Pendula' is a gracefully weeping cultivar with whipcord branchlets, and Dacrydium cupressinum, the "Rimu Pine" from New Zealand, although less hardy (USDA zone 8), grows in the same manner. A new "Western Red Cedar," Thuja plicata 'Whipcord' droops with elegance, while another new Thuja, Thuja orientalis 'Franky Boy' is a brilliant yellow-green in the summer, then changes to copper-orange in winter. Finally, consider Tsuga canadensis 'Slenderella': it is one of the most graceful of all conifers.

So: conifers, maples and other deciduous and evergreen trees and shrubs have been examined from a skinny point of view. Like my college roommate said, "I like skinny girls: everything counts, nothing's wasted."
Posted by Talon Buchholz at 3:55 PM