Today we'll discuss Chamaecyparis obtusa, the "false cypress" with blunt-tipped, or obtuse foliage. Chamaecyparis and "true cypress," Cupressus, differ botanically, but not by much in my opinion. It seems somewhat arrogant that earlier botanists would zero in on some minor plant characteristic such as blunt foliage, and then pronounce a genus or species name for all time. I like better the sound of "hinoki," the Japanese name. According to my Japanese wife, some suggest that hinoki is really three words: hi no ki, meaning "fire of tree." The Japanese characters in this case come from China, and signify Juniperus. Juniper twigs and branches were, and still are, used throughout Asia as kindling for fire starting. And in Japan, hinoki used to be the kindling of choice.

Hinoki wood makes high quality timber in Japan and is described as lemon-scented and light pinkish-brown. I have seen it used in temples and shrines, and it definitely had a sweet scent. I must confess, though, that I have never seen the species in the wild, only in Japanese parks and gardens and containers. But what an excellent evergreen it is, especially considering the hundreds of cultivars of many sizes and colors.

What accounts for the multitude of cultivars (cultivated variants) is the propensity of the species to mutate, i.e. when a branchlet changes color or size or texture. You could call the obtusa species unstable, and in this case it is a good characteristic. Even a modest hinoki hobbyist or producer would be blind if he never discovered a foliage change. Now, just because you find a mutant branch and you or someone propagates it, that does not necessarily mean it will develop into a good garden-worthy cultivar. I know from experience, as I have wasted a lot of effort on many non-doers. I should also mention that the same is true for seedling grown trees. They may at first look interesting and promising, but frequently don't hold up in the garden.

From here on, I'll abbreviate and just list cultivar names, without the full Chamaecyparis obtusa designation.

Many growers want to find something special and name it, and I am no exception. However, I'll begin with a few of my mistakes. 'Harumi', meaning "spring beauty," was an early introduction. It showed great promise with its tiny, twisted thread-like foliage which was specked with cream-white. After its discovery sixteen years ago, it is no longer in our production due to the fact that the green can dominate, and some portions of the plant will show sparse variegation. Eight and a half years ago I welcomed a new daughter, Harumi, and she turned out to be the winner, not my hinoki.

Another failure was 'Snow Blast'. This originated as a fast-growing reversion from the very dwarf 'Snowkist'. Imagine a normal-sized green hinoki with variegated white spots of variegation. At a smaller size it was very attractive, but eventually the growth habit became unruly and the variegation more sparse. The original tree looked disgusting and was eventually edited from the landscape. 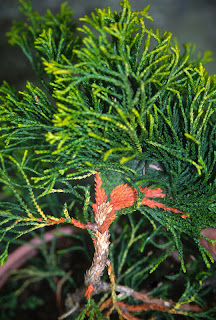 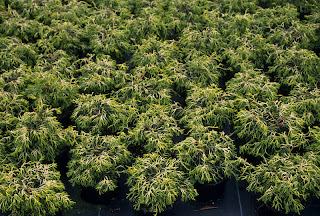 An excellent introduction, though, was 'Lemon Twist', a golden dwarf that originated as a mutation on a 'Torulosa Dwarf', which was itself a congested portion of the old 'Torulosa'. 'Lemon Twist' is a pretty conifer that tolerates heat well. Little golden fasciations, or cockscombes, add to the interest. Well done, Buchholz! A totally unique addition to the wonderful world of hinokis...or so I thought until I first saw 'Tsatsumi Gold' in Europe years later. The two couldn't look more similar. The 'Tsatsumi Gold' name is invalid of course, as correct nomenclature insists that two languages cannot be used in a plant name. Anyway, we've grown many 'Lemon Twists' over the years, and I think it's as good as any golden conifer.

A variegated branch appeared on 'Kosteri' a dozen or more years ago, and also on 'Graciosa' about the same time. The 'Graciosa' sport, named 'Sunshine', was a pretty butter-yellow, where half the foliage was green, and the other half yellow. In production, however, often an entire shoot would be yellow, and in our non-humid climate that portion would burn. So for months I would have toasted foliage before new growth could redeem the tree. Since Buchholz Nursery is not a burn ward, I eventually discontinued it, and sorry to those customers who purchased them. The 'Kosteri' sport, now named 'Moonshine', turned out much better. Its variegation is almost pure white, and it does require afternoon shade. About five years ago, I encountered a 'Baldwin's Variegated' which is very similar, but I do not know its origin.


I'm partial to narrow cultivars (of all plants), especially those that are also slow-growing. 'Gracilis' is rather narrow, but can ultimately reach twenty feet in height. Gracilis is Latin for "slender." 'Nana Gracilis' would imply more dwarf and slender, but it was poorly named as it forms a broad pyramid. 'Nana Gracilis' is quite popular in American and European gardens, but is often misidentified as just 'Nana'. We call the true 'Nana': 'Nana (true)' --our own invented name--to help keep the two cultivars separated. And shame on others who misidentify the real 'Nana'. 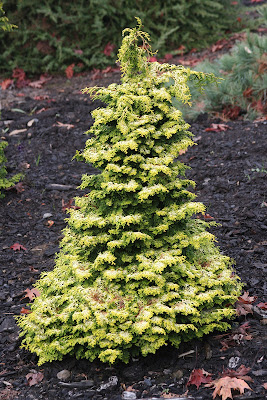 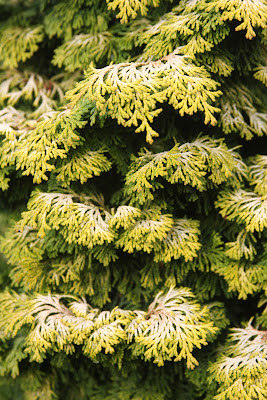 
My favorite narrow green hinoki is 'Vokel's Upright', which I have featured before. It has a couple of golden counterparts, 'Aurora' and 'Golden Pillar', although the latter two are slightly more dwarf. But my favorite gold (these days) is 'Melody'. The beautiful lacy foliage can take full sun even in Oregon, and in fact will be more green if grown in too much shade. My oldest specimen is now eight feet tall by only three feet wide. Another golden cultivar, 'Spirited', is similar to 'Melody' in appearance, but I haven't grown it long enough to judge growth rate or heat tolerance.


There are a couple of blue foliage cultivars, 'Splitrock' and 'Junior', which also feature juvenile and adult foliage on the same tree. Both of these are broad uprights and I can't tell them apart. 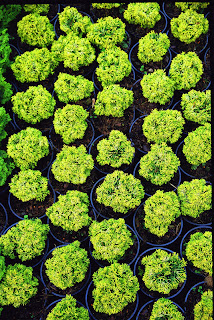 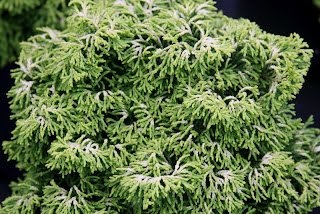 
Buns aplenty exist, tight miniatures with dense green foliage. Again, many of these are hard to tell apart. 'Hage', 'Flabelliformis', 'Stoneham' and, my favorite, 'Green Cushion' grow only an inch or two per year. 'Butterball' displays rich lemon-yellow foliage and the same tight growth habit. 'Maureen' is a pretty flattened bun with lacy grey-green foliage, named after the late Ed Rezek's wife, herself a beauty. 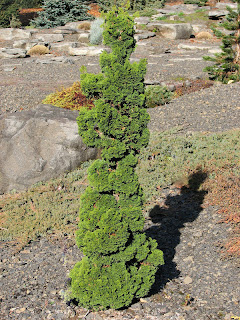 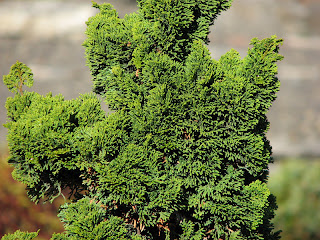 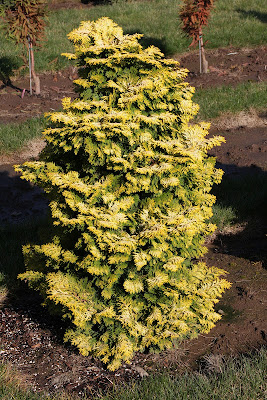 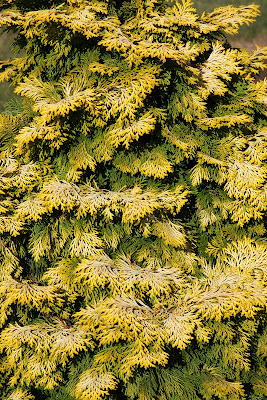 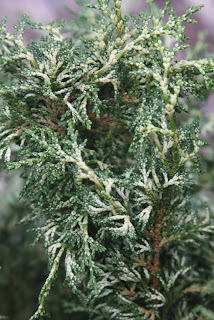 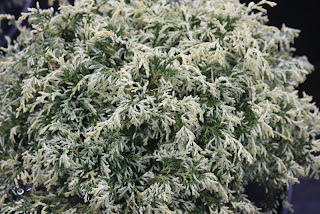 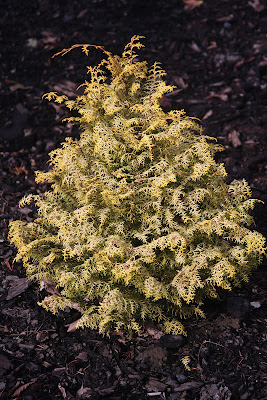 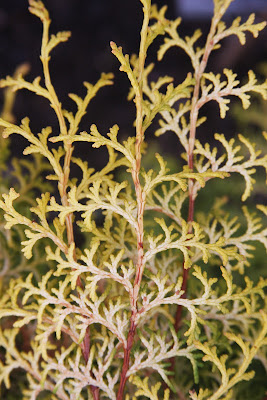 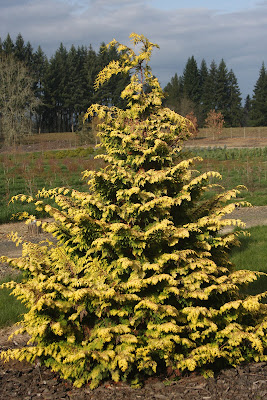 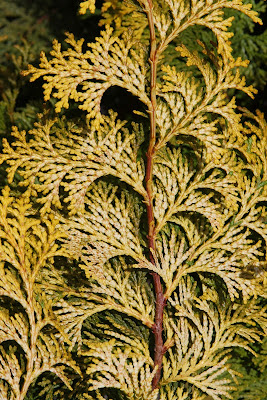 'Bess', 'Confucius', 'Filicoides Compacta', 'Golden Fern', 'Kerdalo', 'Kamarachiba', 'Nana Lutea', 'Verdon' and 'Special Variegated' are all excellent selections. But so too are 'Mariesii', 'Limerick', 'Lucas', 'Rigid Dwarf', 'Chabo yadori nishiki', 'Contorta' and on and on... There are probably hundreds more. I'll conclude now--and to think I was originally going to list other Chamaecyparis species in today's blog!--I'll conclude with a recent introduction, a little cutie named 'Chirimen'. This finely-textured selection has blue-green foliage tapering into narrow spikes. The plant will ultimately form a wide multi-branched small tree, with no two really looking alike. A couple of other conifers that resemble it are Cedrus brevifolia 'Kenwith' and Cedrus libani 'Green Prince', except that 'Chirimen's' foliage is more soft and lush.


Ah, the hinokis: excellent companions in the garden.
Posted by Talon Buchholz at 2:53 PM