Last week I discussed how golden conifers can brighten the winter landscape, but in my opinion they should be used sparingly. It is also important to consider what they are planted next to, what the color is of their neighbors. Dark foliage as a backdrop will improve the drama of a golden conifer. Red and gold combine well, and so does blue and gold. The Pinus sylvestris 'Aureas' at the beginning of this blog were on a slope in our Blue Forest, and beneath them I planted a mass of Picea pungens 'Procumbens'. On a clear winter day, with the sun at the viewer's back, you could see a patch of bright blue on the ground, then the golden pines in the middle, then the blue sky above. It made for a wonderful vista; but I use the past tense because, sadly, the old pines became infested with scale, and they were edited from the scene with a chainsaw. 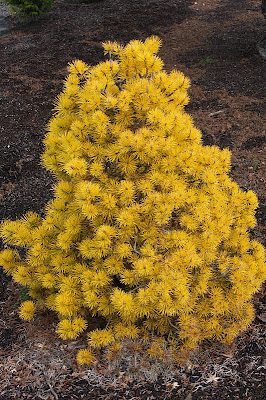 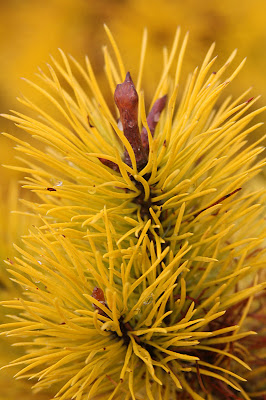 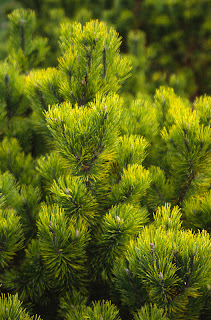 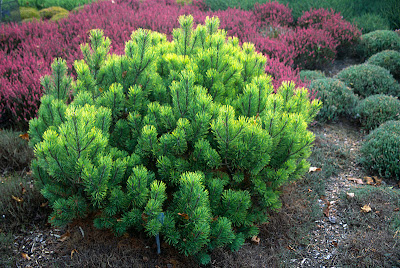 Other species of pines have show-offs as well. Pinus strobus 'Louie' is a soft gold in color, and soft to the touch. Two mugo pine, 'Ophir' and 'Carsten's Wintergold', are fairly new in the trade. Both require full sun for best color. 'Ophir' is greenish until the arrival of winter, while 'Carsten's Wintergold' is more completely golden throughout the year. By the way, it absolutely irks me that we have to include the "Carsten's" part of the name. Who cares about Carsten? It is such poor form to have your name included in a plant name. Thankfully K.J. Kraan of Holland left 'Ophir' alone.

Two Japanese species of pine have an "Ogon" cultivar, Pinus thunbergii and Pinus parviflora. Ogon is Japanese for "yellow." Pinus parviflora 'Ogon' has a light straw-yellow color. A young tree can look rather sickly, and is slow-growing, often with a poor shape. But don't give up: as it grows it fills in, and this winter my oldest tree displays a very attractive shine. The Pinus thunbergii 'Ogon' features more deep gold coloration, and in various amounts. Sometimes the needle tips are flecked in gold, other times there are patches of gold at the needles' base. Hard to describe actually, but a mature specimen is worth the wait.

There are scads of golden arborvitae. Thuja occidentalis and plicata have many selections, but I tend not to like any of them. The Thuja orientalis species has some winners however. Very colorful is 'Van Hoey Smith', with enough green in the foliage to make the gold all the more bright. Perhaps I am cheating to include it into today's blog, maybe it should be in a "variegation" blog. Anyway, the foliage is dazzling.

Of course, the name honors the late Dick Van Hoey Smith from Trompenburg. The story of the cultivar name is interesting, as it came from me. And didn't I just rail against the use of personal names for a plant? But, I didn't mean to name it. I got a start when it was first new in America, but apparently without a name, or one that Van Hoey Smith could remember. I didn't officially name it, but I had to call it something. So this temporary name stuck when I first sold or gave away some. Van Hoey Smith himself was amused about the name, proof to him that Americans had their own foolish rules (or none) about nomenclature. So probably the exact same clone exists in Europe under a different name. And I'm kind of embarrassed about my role in the affair. 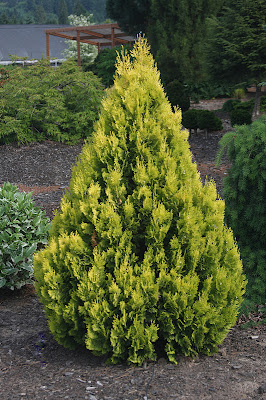 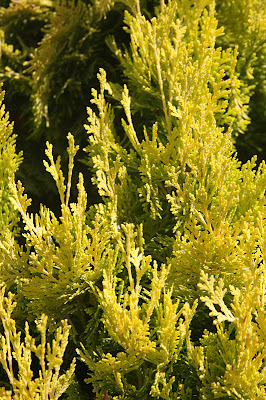 Thuja orientalis 'Franky Boy', also from Europe, has been discussed by me before. It has very curious thread-like branchlets and a very winning appearance. The pretty light-gold of summer is now a deep copper color, and is as handsome in winter as in any season. Thuja orientalis 'Weedom' grows into a formal dense pyramid, and could be interesting if combined with a dwarf blue spruce, such as Picea pungens 'Lucretia'. 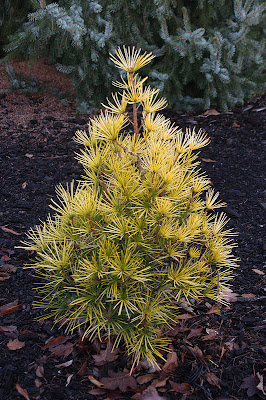 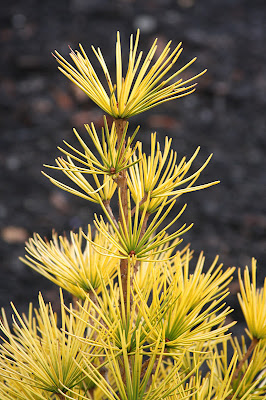 These days there are some lovely cultivars of "umbrella pine," Sciadopitys verticillata. When I began my career in the 1970's, the only cultivar available was the horrible 'Ossorio's Gold', horrible because it just wasn't gold enough. When a green Sciadopitys isn't happy, it can look yellowish…like 'Ossorio's Gold'. Many of the new and better cultivars come from Germany; Wittboldt-Müller Nursery has been the source of many. 'Gold Rush' and 'Goldammer' are excellent selections, but there are many more. 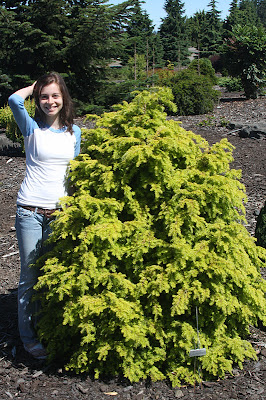 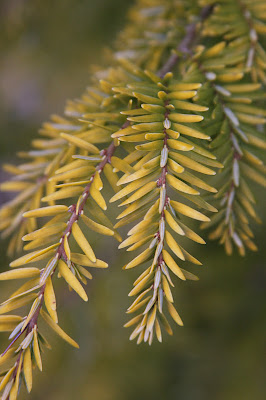 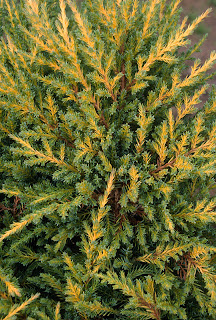 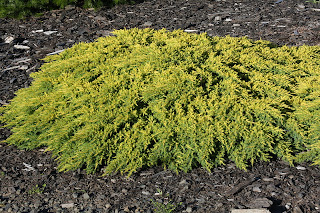 Such as with Sciadopitys, hemlocks must also be gold enough so as not to look sick. I like Tsuga canadensis 'Livingston', a slow-growing upright pyramidal tree. For junipers, nothing is better than Juniperus chinensis 'Daub's Frosted'. Junipers are difficult for plant snobs to like, for whatever reason, but 'Daub's Frosted' is very colorful and so very useful. A mature specimen will grow only a foot or less tall, but spread into a dense mat up to 10 feet in width. The base of the twigs is light green, while the tips are pure gold. Nothing boring about it. 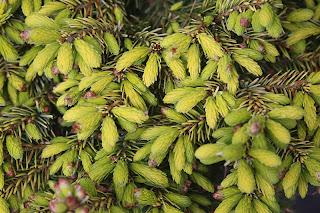 Finally the spruces. I suspect every species has its golden form, but I'll just mention two. Picea omorika 'Golden Midget' is a Buchholz Nursery introduction. It grows into a dense pyramid, and appears more colorful than 'Peve Tijn' from Vergeldt in Holland. 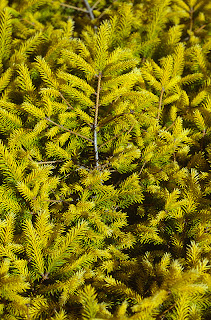 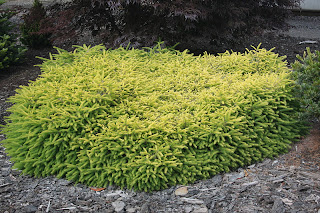 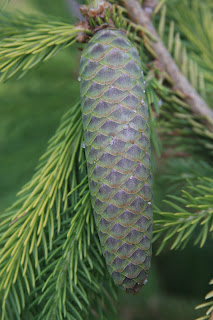 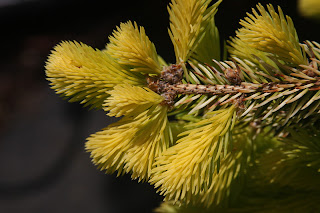 The "Norway spruces" have dozens of golden selections. I like Picea abies 'Vermont Gold', from Greg Williams of Kate Brook Nursery in Vermont. It requires sun for best color, and will be almost pure green if planted in deep shade. 'Vermont Gold' is a compact dwarf, growing naturally into a low, spreading shape. Or, it can be staked into a dense pyramidal tree. Another interesting selection from Greg is Picea abies 'Acro-yellow'. This is the golden form of the old cultivar, 'Acrocona'. Reddish spring cones look nice against the golden foliage of 'Acro-yellow'. 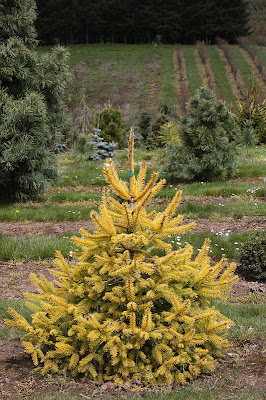 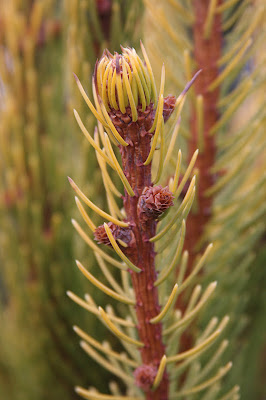 A more robust "Norway spruce" is Picea abies 'Aurea Magnifica'. It has a columnar shape, growing to 6' tall in 10 years, but ultimately can exceed 30'. Lastly, my introduction from 30 years ago, Picea abies 'Gold Dust'. This little dwarf has tiny thin needles, which I won't describe as you can see for yourself. This imp was found in an understock batch, and was thrown in the trash late one night when I was grafting. Obviously it wasn't going to make a good rootstock. The next morning I had a more benevolent view of the seedling and rescued it. 'Gold Dust' even earned some mild praise from Don Howse of Porterhowse Farms, a conifer geek who has "seen them all."

You're probably overloaded with golden conifers by now, assuming that you've made it this far. I selected these plants after a quick walk through the gardens. Perhaps I overlooked the best golden conifer of all, and I'll feel like an idiot for missing it. But, too late.
Posted by Talon Buchholz at 12:42 PM