Early on in my career--in the early 1970's--I couldn't help but notice that golden conifers were being grown by many nurseries, and that they could provide an impressive presence in landscapes in any season. Now that we are in the middle of winter, these golden plants really come alive. In fact, with the perennials all cut back, and since the deciduous tree leaves have fallen, one can penetrate the scape and spot glowing gold quite easily.

The choices for golden conifers continues to expand. In the 1970's we had golden junipers, 'Golden Pfitzer' and 'Old Gold' come to mind, both cultivars of Juniperus chinensis. I can't remember others as it was so long ago, and besides, I don’t grow any of the old-timers anyway. But today every genus, it seems, provides excellent possibilities: better Juniperus, Chamaecyparis, Picea, Pinus, Tsuga, Abies and more. Let's walk through Flora Wonder Arboretum and see what we can find. 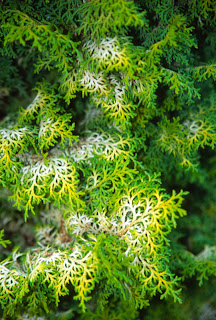 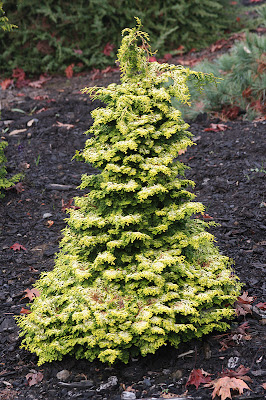 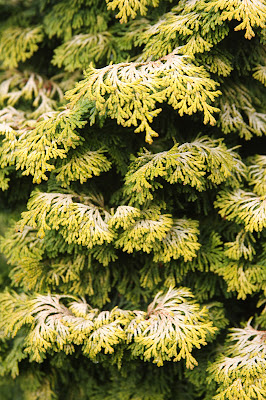 
Chamaecyparis is well represented. One of my favorites is Chamaecyparis obtusa 'Melody'. This cultivar will form a narrow, compact slow-growing tree. Foliage is lacy, a lemon-yellow to white-yellow on the sprays. Best of all, it will take full sun with adequate moisture, and never needs pruning. Another golden choice with similar form is Chamaecyparis obtusa 'Golden Pillar'. This dwarf displays the more traditional "hinoki" foliage, and is more compact than 'Melody'. 'Golden Pillar', when given luxurious culture, can occasionally produce some rambunctious top-growth (as it does here at the nursery), but minor pruning can easily remedy that, and when planted in the ordinary landscape, few problems will occur. Both 'Melody' and 'Golden Pillar' require a good deal of sun, otherwise foliage will be pale yellow-green.

Chamaecyparis obtusa 'Confucius' is a vigorous compact-pyramidal cultivar with rich butter-yellow foliage in summer, growing faster than the previous two selections. In winter the foliage evolves to an orange-tinged color. 'Confucius' comes from New Zealand, or at least that is where my start came from, back when Chamaecyparis was legal to import. But the New Zealand nursery industry is like that of the Dutch--they need to export, and preferably with new plants. For all I know, 'Confucius' originated somewhere else, or perhaps even is a renaming of something else. As cultivars bounce around from country to country, anything can happen. Anyway, golden sports on green hinokies are fairly common, as are golden variations within a seedling group. 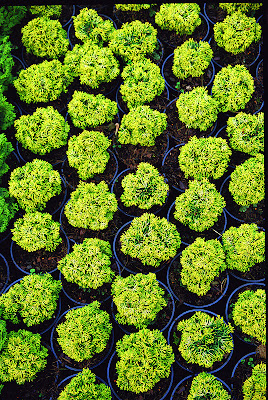 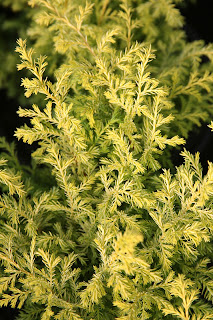 I generally disparage the Chamaecyparis pisiferas--they are cheap and easy to produce, and therefore ubiquitous. But they make tough shrubs for the colder climes. Chamaecyparis pisifera 'Lemon Thread' used to be a mainstay here, and we still grow a few. A new selection, given to me by the noted plantsman, John Mitsch, is Chamaecyparis pisifera 'Harvard Gold'. John said that "they say it is the brightest of all." And "they" might be right. It is a bushy upright dwarf and takes well to pruning. I suppose you could even make golden animals out of it. John named it 'Harvard Gold' as he got his original from the Arnold Arboretum of Harvard University. 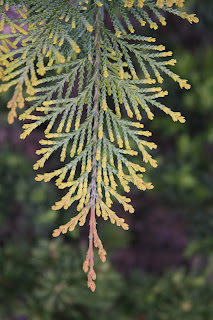 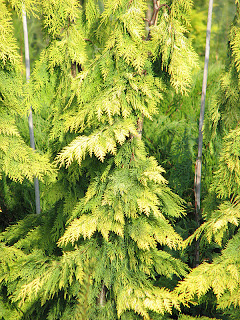 
…and plenty of more Chamaecyparis obtusas, such as 'Aurora', 'Crippsii', 'Golden Fern', 'Golden Fairy', 'Kamaeni hiba', 'Kerdalo', 'Limerick', 'Lucas' and on and on.

Moving away from the Chamaecyparis, I can look out my office window and see a gorgeous dense pyramid of Abies concolor 'Wintergold'. This cultivar of the "white fir" is intensely gold at this time of the year. In May, the new growth is delightfully chartreuse, which contrasts nicely with the older (still golden) needles. Even the delivery man who fills up the nearby propane tank said, "Wow! That's the purdiest tree I've ever seen." 'Wintergold' is rather dwarf, growing to 5' tall by 3' wide in 10 years. 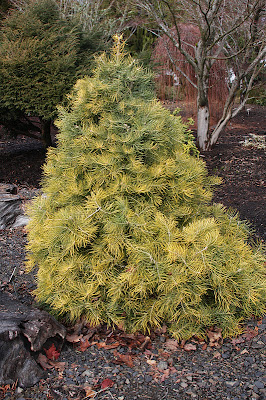 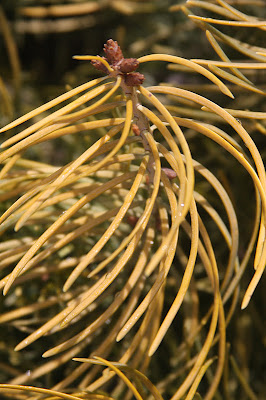 Abies nordmanniana 'Golden Spreader' is impressive as well, and when established it can grow in full sun without burning. It is probably at its best on a gloomy, cloudy winter day. This selection is beautiful in any type of garden, and while it only grows to 1' tall by 3' wide in 10 years, most of the mature specimens I have seen eventually grow more tall than wide…so give it enough space. 'Golden Spreader' originated at the Schoots Nursery in Holland over 50 years ago. 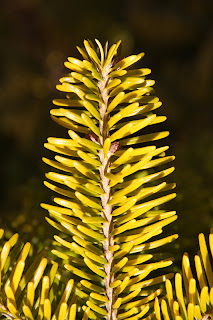 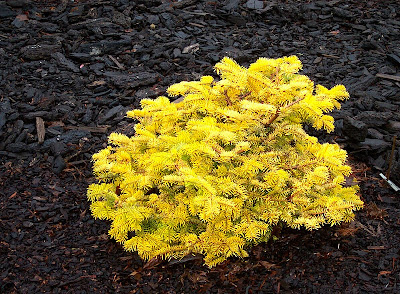 Perhaps that's enough of golden conifers for this week. I'll pause now, and take it up again later. And I should confess that when I, and other plantsmen try to describe the color of "golden" plants, we throw around adjectives such as "butter-yellow," "lemon-yellow," "bronze-gold," "bright-gold," "rich-gold" etc. But certainly they'll look different in my growing conditions than in yours, also, the color will vary throughout the seasons, and the degree to which they receive direct sunlight. Plants that we give up with, due to summer scald in non-humid Oregon, can look perfect in other parts of the world.

The average landscape or even a great one, will be enhanced by the use of golden conifers. But don't get carried away--like exclamation points, they should be used sparingly.
Posted by Talon Buchholz at 3:47 PM