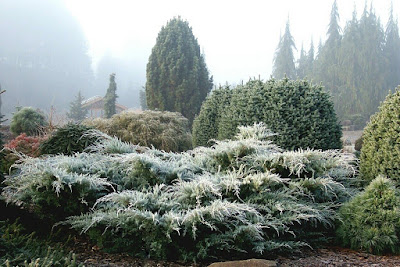 I don't know about you, but I consider it to be winter already. Leaves have fallen from most deciduous trees and I am faced with a denuded garden, often in a bone-chilling fog and with apprehension over the prospects for the future. Did we store up enough nuts for winter? Will last summer's propagation result in plants to sell for the upcoming season? Will the greenhouses endure another record snow and withstand the howling winds of an Arctic blast? Can old Buchholz continue to summon the energy to orchestrate his troops so that they are not wandering in futile chaotic circles?

Though it is tempting to go dormant, to lie down and curl up until next spring, I venture into the Display Garden this post-Thanksgiving morning to make a list of meaningful work projects – like raking, pruning, staking, tree-removal etc. – that will keep the crew occupied for the following week. Woah! For a moment the sun breaks through the gray gloom to reveal a golden scepter in the northeast section of the garden...which turns out to be the dwarf conifer Chamaecyparis obtusa 'Aurora'. It is beautifully named, as 'Aurora' is the Roman goddess of the dawn, and my plant rises to 8' tall by only 2' wide. Foliage is a rich yellow – not shining bright at all – and I had no idea when I collected my start 20 years ago...just what it would grow into. The cultivar originated around 1940 as a mutant branch on C. obt. 'Nana Gracilis' at the Koster & Sons Nursery in Boskoop, The Netherlands. No big deal, as most of us have found golden sports in hinokies, but what I find interesting is that my cutting-grown start assumed an obelisk form, where as most nurseries and arboreta describe it as at least as broad as tall. I haven't pruned my golden pillar and it just took off skyward on its own. C. obt. 'Aurora' will not appear as deliciously lemon-yellow as a rival cultivar, 'Nana Lutea', but then it won't sun burn as easily as the latter. I have 'Aurora' in production from both rooted cuttings and from grafts (onto Thuja occidentalis 'Smaragd'), so it will be interesting to see how future generations will shape up. 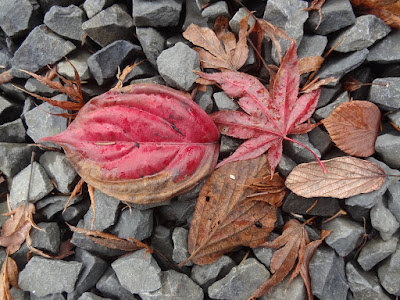 One of the rock paths through the Display Garden reveals an interesting vignette where various leaves have gathered. The leftward-pointing orb is a Cornus kousa which probably came from a nearby row of the cultivar 'Ohkan'. To its right is clearly Acer palmatum...which must certainly be a leaf from my large specimen of 'Shojo nomura', a selection which I enjoy in the garden but which I no longer produce. The brown elliptical leaf is what remains of Corylopsis willmottiae 'Spring Purple', a winter-hazel noted for its plum-purple new growth and showy yellow flower racemes in March. This winter scene should garner some respect, especially when we consider what the trees once were, but I predict that the casual visitor would tromp upon them without any notice or concern.

Twenty steps later I encounter Acer buergerianum 'Miyasama yatsubusa' in its golden glory, a dwarf Japanese maple that has arisen to 12' tall at 30 years of age. It is the largest specimen that I have ever seen, but I would bet that one exists larger elsewhere. It is described by Vertrees in Japanese Maples as a “delightful dwarf,” but “rather rare in collections” because it is “slightly difficult to propagate.” Hmm...I would consider it rare in collections because it is so slow-growing that the poor nurseryman makes no profit from it, and it annoys me when our customers stumble upon a group – which are not for sale because they are so old and small – and expect that they'll be priced similar as our other dwarves. In truth, I have my one old specimen and nothing else larger than a few two-footers in pots. “Slightly” difficult to propagate would not be my experience, for I have previously considered it to be very difficult to propagate. From rooted cuttings under mist in summer we achieve anywhere from 0% to 30%, and approximately the same from winter grafts. Then – surprisingly! – our last two summer's-grafted propagants mostly connected successfully, so I sold the majority of the little runts since I won't be around to see any attain the size of my original. In Yano's Book for Maples he indicates that the cultivar originated in 1975, presumably in Japan, and wouldn't it be fun to see the original tree!

Barberries are never considered aristocrats in the garden, but then maybe the elites have never seen my specimen of x 'Red Jewel', a cultivar encumbered with the specific epithet of hybrido-gagnepain, and sometimes more simply as x media. The former name honors French botanist Francois Gagnepain (1866-1952), but I don't know if he performed the cross or simply described it. Hillier in Manual of Trees and Shrubs claims the B. x media originated as a hybrid of B. x hybridogagnepainii 'Chenaultii' x B. thunbergii, and that 'Red Jewel' originated as a sport of 'Parkjuwell' in The Netherlands. Don't worry, because that is too much to remember, and what's important is that the red globe – though prickly – is moderately attractive in spring and summer, but in fall and winter it wonderfully glitters with orange and red foliage.

I passed GH1 and just inside the doorway the new cultivar, Acer palmatum 'Bloody Talons' was showing off. It originated as a seedling but I have no idea what cultivar was the seed parent. I tend to not keep track of parentage anymore because of my employees. It is a compromise that I regret, but most workers just don't get that a cultivar and a seedling offspring from a cultivar are not the same. Now, plants like A.p. 'Bloody Talons', A.p. 'Frosted Purple' and A.p. 'Yellow Threads' are orphans of no known parentage, but we have gathered them into our fold and have bestowed them with names. We can't keep everything – since we can't vet them all – and the outcasts, though very nice, are designated as Acer palmatum 'Rising Stars' Series which are sold at 1/3-1/2 the price as named cultivars.


It is easy to collect choice Rhododendron species, especially if one frequents the Rhododendron Species Botanic Garden as I do in Washington state. The problem is that I have five or six plants to place in the garden, but I'm stymied by trying to find the perfect site. They would all benefit from PM shade, yet I need a spot where they will have enough room (at least in my lifetime) to grow. R. pocophorum 'Cecil Nice' awaits its place and I think that I'll ground it next Monday whether it's raining or not. The Species Garden calls it “A fantastic foliage plant – the deeply veined, dark glossy green leaves have a thick orange-brown indumentum beneath. Deep red bell-shaped flowers in early spring on this 1971 AM form. Very beautiful and very slow-growing – one of the classic 'collector's plants.'” I've never seen it in flower and I bought it for the foliage alone. It is native to northwest Yunnan, China, where I have been, but I never saw it in the wild. 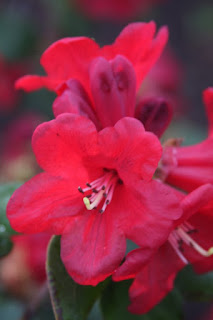 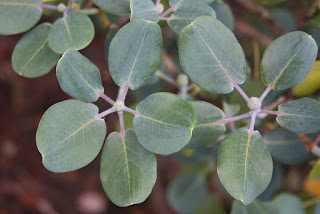 I have Rhododendron thomsonii to plant out as well, a species which received an Award of Merit in 1973. The award was given to the species which is relatively uniform in the wild. The aforementioned R. pocophorum is variable in the wild, and so it was the 'Cecil Nice' clone that was given the AM, not the species in general. The latter was raised from Frank Kingdon Ward-collected seed, and he was famous for not only discovering and introducing species, but also for collecting the best garden forms. There also exists a Magnolia 'Cecil Nice' and Narcissus 'Cecil Nice' which honor the Head Gardener at Nymans who toiled from 1924 until his retirement in 1980, the last 27 years as Head. 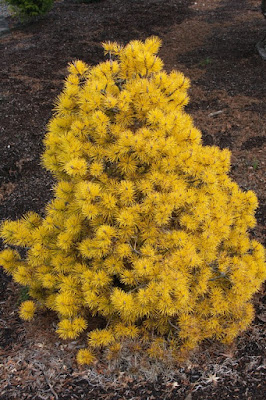 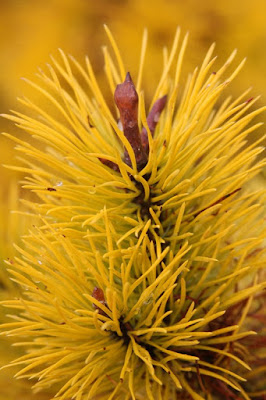 What an incredible phenomena of nature that certain drab-boring pines can evolve from green into brilliant golden beacons in the winter landscape. The transformation began about a month ago when various mugos, Scots, Japanese blacks etc. assumed a slight golden glow...which increases daily from a hint to the profound. The champion, absolutely, is Pinus contorta 'Chief Joseph' which was discovered in the Wallowa Mountains of northeastern Oregon by the late Doug Will of Sandy, Oregon. Eastern Oregon is vastly different from my home climate, and in the arid winter of the former 'Chief Joseph' shines brilliantly throughout fall, winter and early spring, but in Western Oregon our soggy humid winters cause the pine needles to crud up brownly in March. By April the cultivar can look dreadful – usually when nurseries ship their plants – but then by May the foliage changes to green and the tree is redeemed by fresh new growth. Its color-cycle is frustrating certainly but for the four months in its golden prime one can endure the brown needles of April and May. 'Chief Joseph' has a reputation to be difficult to propagate and so the value of young trees stays at a premium, but lately our grafts onto Pinus contorta rootstock have resulted in over 50% success, so we are able to sell one-year-grafts as well as to keep some to grow on as larger specimens. The pine was named for the remarkable Indian Chief of the Nez Perce (pierced-nose) tribe of eastern Oregon and Idaho. 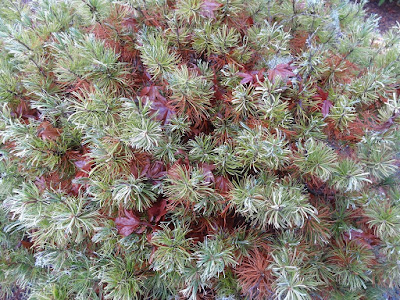 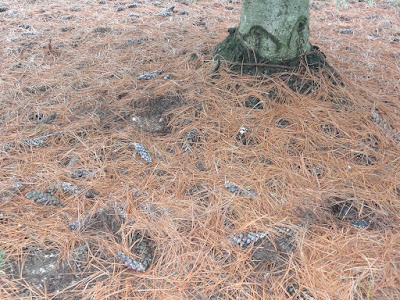 Of course the pines change color, even beyond the exceptional cultivars that were selected for winter gold, because it is a normal process that they shed older needles. Often times the needles turn to pale yellow, then brown, before falling to the garden floor during winter. It is not bothersome to see this in the forest wild, but it is unsightly for the pines growing in containers and in a manicured landscape. I have even joked before, "I hate nature." Nature means crooked trees, shedding needles and death, and it's hard to make a living with that. To some degree nurserymen are fraudsters since we prune, stake and water our crops to make them more appealing. And that's the key word – crops – because nature herself has too many flaws. At some point I think that I'll go cold turkey and not be responsible for any plant. Record heat, frosts, winds and snowstorms won't bother me at all, just like when I was a child. 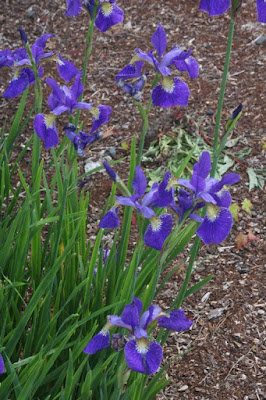 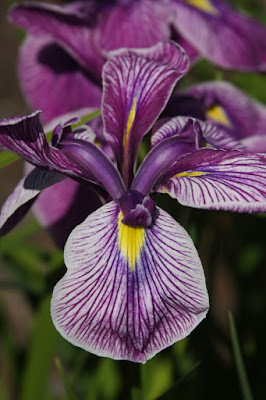 Iris species in the Display Garden

I like species Iris – I don't really care for the gaudy hybrids that you mostly see. Our Display Garden has a number of clumps that I've collected over the years, and they give me great joy in the spring and summer. Unfortunately I can't tell you the identity of any of them because their labels are gone – they were thrown away when we clean the garden of leaves and dead foliage every winter. The labels were made of metal and each one had a bamboo stake next to it so we could easily find the name. So why were they thrown out? My employees are hard workers and I think for the most part they care about the company, so I'm thankful for them. But it drives me mad when I see a plant – Iris, maples, conifers, anything – without the label it once had. After all of the years here, and the thousands of dollars that we've spent on labeling, why is there still a disconnect about their importance? A worker can toil in a nursery his entire life without really caring about a plant's name. I find that sad, but maybe I'm the one who is unusual.
Posted by Talon Buchholz at 2:23 PM