My Home at Flora Farm

Last week's blog featured plants in the Cornus section at Flora Farm, in the Upper Gardens. Regular readers know what I am talking about: namely that my home is located on a farm (Flora Farm) of 60 acres, with the best type of neighbor to the north – the Tualatin River – and to the south a group of "gardens" (the Upper Gardens) that extend up a gradual hill to Blooming-Fernhill Road. I estimate the above land-size to be a whopping half a million square feet, and yes I did the math twice to make sure I wasn't a zero or two off. The cars that barrel down the road at 65 MPH (plus) have only a quick blur at the trees below, and they must wonder if it is a little golf course or some type of nature amusement park. Other driver and bicyclists, traversing at a more leisurely pace, can clearly see that it is a tree collection, but must surely wonder, "what's the point?"

I myself cannot answer that question, or at least provide an answer that is profitable. The gophers and moles, for their part, continue their farming operations to my consternation, and the damn creatures invade my personal space and disrupt my livelihood. They eat my Ginkgoes' roots, dull my mower blades, befoul my pristine landscapes and they breed by the millions every year. Of the 500,000 square feet that comprise the Upper Gardens, not one foot is devoid of a gopher hole. You might not be able to fathom what I just claimed. But come out with me then. We'll walk the grounds and you will see. Your ankles and feet will ache from the uneven terrain and you will grow old and tired like me.

But Flora Farm has its advantages too. My Blooming-Fernhill community was formally organized during World War I, when the men were off fighting in Europe and the women and children really did need communal assistance. I was fortunate to meet neighbor Willa, just three houses up the hill from me. When her husband went off to war she surprised him and planted hazelnuts on their acreage. He returned and his son (or sons) farmed them for years, and even today the land consists of nut trees. Righteous Willa out-lived her husband; she endured and prospered delightfully for a century...and a little more, and even though I am not particularly religious myself,  my family and all of Willa's friends could certainly recognize that the devout woman was a beacon of religious love. Someday, when I'm long gone, I imaging that my dear wife Haruko will shine at one hundred similarly, as she glows now in her mid-thirties. What difference does it make whether you are Buddhist or Christian? You will be defined by your works, by your grace. Of course Willa and Haruko hit it off instantly.

But before you get to Willa's place, my immediate western neighbor is the good John Jackson, and both of us have grown ornamental trees for profit. Mr. Jackson's father lived in Eugene, Oregon, and he was one of the first to go beyond the normal oeuvre of Japanese maples – beyond the red uprights and laceleafs...into the realm of the variegated Acer palmatum 'Butterfly', the dissected Acer palmatum 'Seiryu' and the feathery Acer palmatum 'Ruby Lace'. Today, son John grows tortuous willows (so close to Willa's place) for the florist trade, and, while only just a few years older than myself, he seems to be happily occupied with his semi-retirement. He is familiar with the area's stray dogs, knows the source of our well waters, has experienced the century flood-water marks and, with his pleasant wife Sharon, provide a buffer of security and decency on my western front. What a contrast to my main nursery location, an area known for aggressive drug addicts, felonious ne'er-do-wells and other spongy recipients on the public dole.

To the east I can receive fantastic sunrises, like the one last Tuesday. Between the Douglas Firs I can see Mt. Hood, our state's iconic landmark, a mountain I have climbed three or four times. The property to my east is owned by Grace Dinsdale, the founder of the famous Blooming Nursery, a grower of choice perennials. We began our nurseries at the same time, and I remember when I first met Grace she was holding a watering hose. Like me, she has owned her nursery for over thirty years, but it always seems that her company is run better than mine. Another difference is that the years have been more kind to her. She is a tall good-looking woman who could pass for 37 or 38, whereas I... 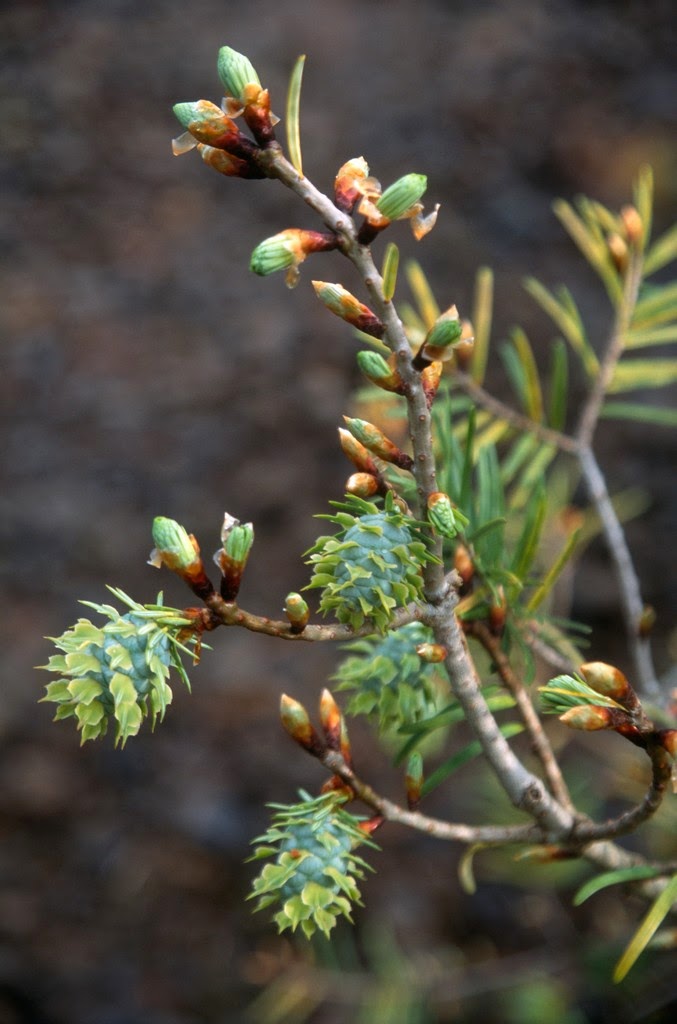 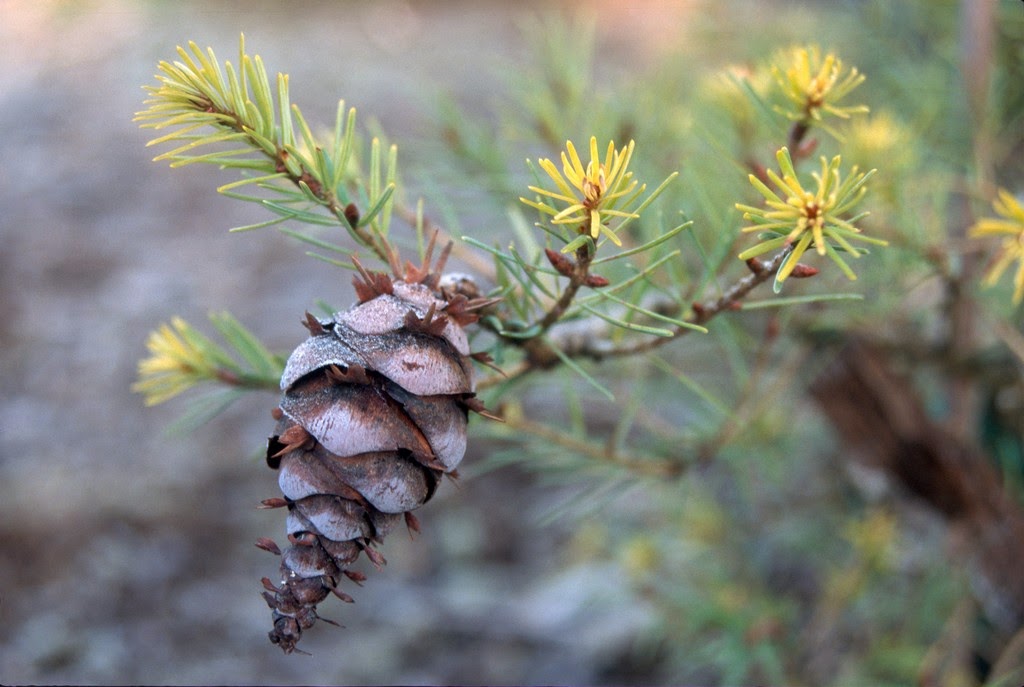 To the south we have Blooming-Fernhill Road, and across that are blueberry farms and vineyards of Pinot Noir that run most of its length. It's very obvious that I now reside in a much better neighborhood than at the nursery. Besides, my Flora Farm features two enormous "Douglas Firs," Pseudotsuga menziesii, and near to them I planted a Pseudotsuga japonica and a Pseudotsuga sinensis, and I wonder if these three species exist in such close proximity anywhere else on earth. In the Upper Gardens I also made a point to plant cultivars of Sequoia, Sequoiadendron and Metasequoia close together, on the outside chance that the trees might be allowed to exist indefinitely. Don't forget that the Sequoia and Sequoiadendron genera were first scientifically categorized by one J.T. Buchholz, and that Buchholz Nursery also probably holds the national collection of Metasequoia cultivars in America.

I confess that the main reason I purchased Flora Farm (nearly eleven years ago) was due to one gigantic oak in the front yard. This Quercus garryana is estimated to be over three hundred years old, unusual for its species that seldom achieves such an age. Note that my huge and perfectly-shaped oak and the two nearby Douglas Firs were not planted by anybody – they are native to my locale, and they certainly existed long before we white men ultimately robbed the land. What a coincidence that David Douglas (of the Fir) was the plant collector and explorer who named and introduced Quercus garryana. The species honors Nicholas Garry of the Hudson's Bay Company who helped Douglas during his travels. More importantly, my children now have a playhouse under the oak and a swing attached to it. Kids: imagine the Native American maiden who gathered acorns under this tree two or three hundred years ago. I now own a white man's deed to this property, but of course I am only a temporary occupier hereabouts. Eventually I will be but dusty crumbs, but these trees will continue long after me...or so I hope. 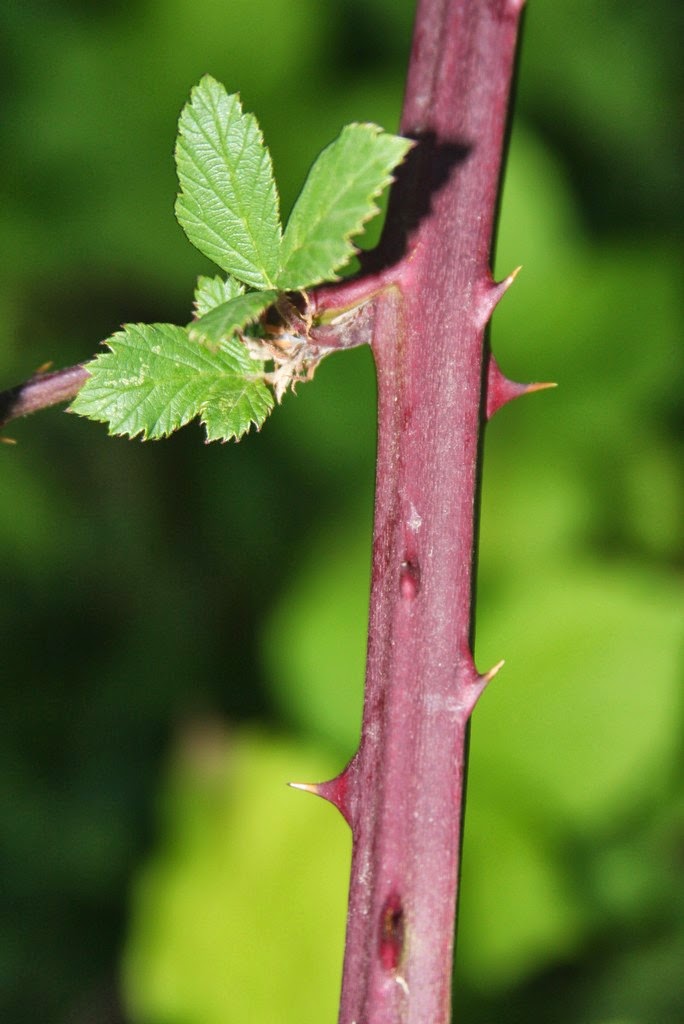 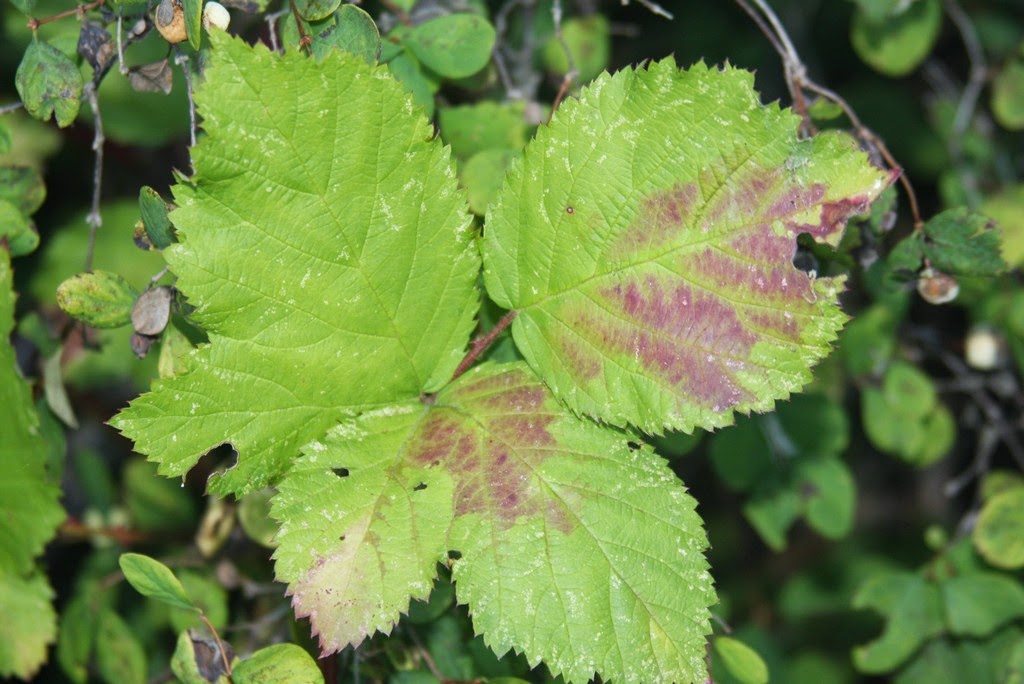 As mentioned before, to my property's north is the Tualatin River, and I actually own an acre or so on the opposite side. This real estate I concede to another farmer, as I have no easement to it, and I would have to ferry across the river to do anything with it. Strangely, I pay – not him – the property taxes, and the Guv always collects and couldn't care less about the access details. The herbage along the river includes poison oak (Toxicodendron diversilobum) and blackberries (Rubus fruticosus), as well as an impressive colony of Canadian thistle (Cirsium arvense). The more upstanding flora includes Acer circinatum, Acer macrophyllum, Quercus garryana and Pseudotsuga menziesii, and the trees are a haven for deer, fox, raccoons, coyotes etc. 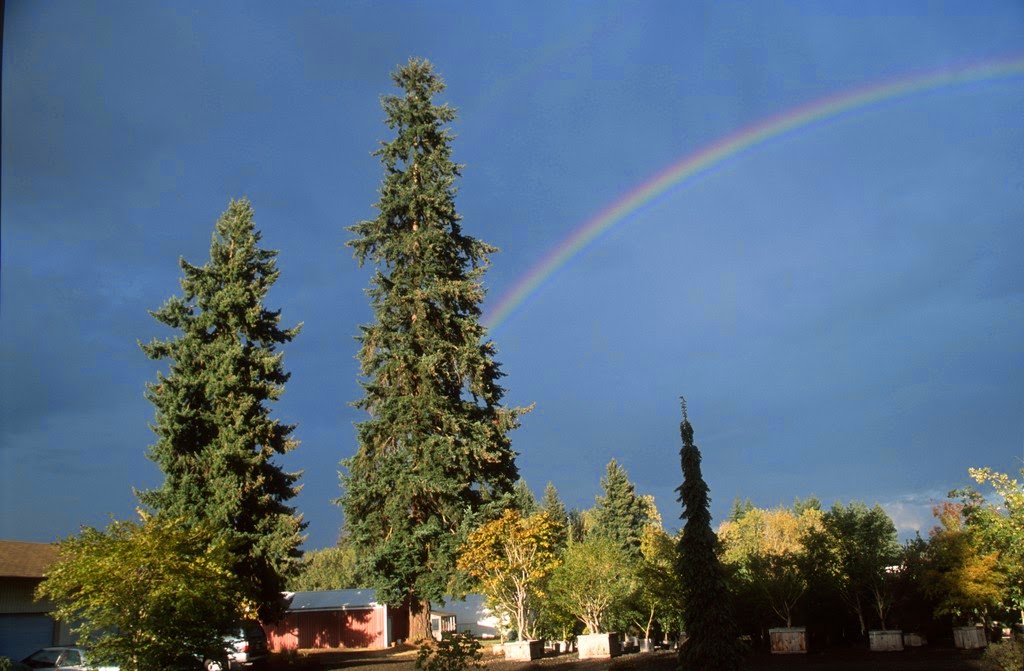 The coyotes often cry out chillingly at night, demonically yelping for a few minutes – up to a half hour – then suddenly go quiet. Whatever transpired in that time I do not want to know. One night our family cat, Luna, was snatched away from our front lawn, only twenty steps away from our door, and only blood and fur remained for my shocked children. We are only two miles away from town, from the bank, school and box stores, but it can still be wild out here. When my daughter Harumi was first becoming aware of our natural world, an owl would occasionally visit at night and hoot at her. My wife delights in the hummingbirds, as her hometown of Tokyo only contains screeching crows picking through garbage. And finally Haruko could see a rainbow (niji in Japanese), a phenomenon unknown to the denizens of that huge polluted city. 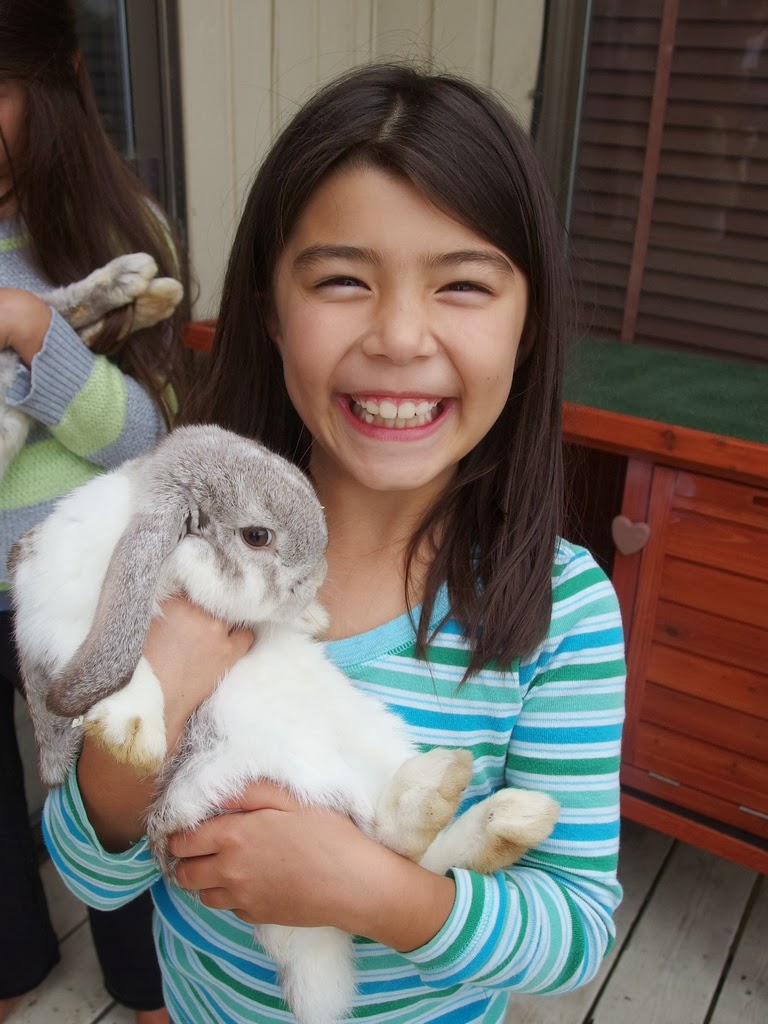 It's a good place to raise a family, this Flora Farm. My daughters have their rabbit pets and Sammy the wonder-dog, and they even have their own personal garden where they have grown beans, sunflowers and roses. They love to live in the country, or at least do so now, and their mother makes sure that they understand that it's all due to their hard-working father. Haruko is a woman who gets it, a wonderful mother and wife.