Aweekago I Was blessed to witness some crown jewels in the Floral World. The plant extravaganza (from Italian stravaganza) occurred last Friday with a visit to Far Reaches Farm, located at the northeast tip of the Olympic Peninsula in Washington state – indeed the far-to-reach domicile of Sue and Kelly, proprietors of a unique collection...that is both under control, and at the same time, way beyond control.

These plant nerds do more than just collect, grow and sell unusual and fantastic plants, but they actually raise newly discovered species and varieties, and their travels in remote Asian regions have resulted in the introduction of wonderful horticultural gems. For example I was able to acquire a seedling of their discovery and introduction of Cardiocrinum giganteum var. yunnanense 'Big & Pink'. Yes!, the first pink-colored break of the species. Alas, I arrived a week too late to see blossoms in prime, but the remains were still richly colored. Understand: my seedling might not produce pink blossoms, as no seedling is ever guaranteed to be true-to-type, but as Kelly cheekily retorts, "How do you know that it won't be red either?" Google Far Reaches Farm, but first finish this blog, as I fear you will be far more entertained by them than by me.

The first floraganza that I encountered was a huge Swath of Lilium martagon 'Claude Shride' with hundreds of blossoms, maybe thousands. The cultivar is described as an "oldie but goodie," and while I have seen a number of excellent martagons (from Turkish martagan, a type of turban) I had never encountered this one before. So turbans off to Claude, then.


Inside the Far Reaches lath house was another delicious "Turban Lily," Lilium pomponium, which can range from orange to lipstick red. In French it is known as Lis de Pompone, and was also once known as Lilium rubrum. It is native to southern France and northern Italy, and wouldn't it be fun to find it in the wild! I loved the hair-like foliage, even if the species never bloomed, for I seem to be a fan of the wispy.

Far Reaches tried to hide another lily in the back of a greenhouse – crammed with hundreds of other species but the luminous glow from Lilium parryi, the "Lemon Lily," was impossible to miss. Also known as "Parry's Lily," the species is native to southwestern United States and northern Mexico. It is rare, indeed rare and endangered. Once again, I had never seen one in bloom before. The species name honors Charles Christopher Parry (1823-1890), a collector who roamed in Colorado, California and Mexico. More information on this very interesting man can be found in a biography by William Weber, The King of Colorado Botany: Charles Christopher Parry.

No wonder that we would find beautiful lilies in bloom in June at Far Reaches, because on our circuitous drive up to northernmost Washington, we enjoyed numerous patches of our west coast native, Lilium columbianum, the "Columbia Lily" or "Tiger Lily." By "we" in this paragraph I refer to myself and my office manager, Eric Lucas, who proved to be a poor helmsman, and caused us to drive around in circles. I was operating the vehicle on four hours of sleep and two cups of black coffee, so I was in no way accountable for the navigational difficulties. Good thing that Far Reaches was worth the extended tour. A note, that tour is from Old French tourn, a "turn," "trick," "round" or "circuit," and I was certainly "turned around and tricked" by mis-guided Eric Lucas.

Further into the Far Reaches Farm collections, a lily-relative is proudly displayed, Nomocharis pardanthina. They collected their strain in the Cangshan (China), and the spectacular flowers open to pink with maroon dots. Kelly says that he wants "Nomocharis petals strewn on his casket," but I would recommend that Sue just plants him next to the Nomocharis patch. The Cangshan range is located just west of Dali City in Yunnan province (where I visited in the 1980's), and the pagoda in the photo above is pointing to the exact spot where Far Reaches gathered their seed. The genus name is derived from nomos, meaning "pasture" and charis, meaning "grace." It was originally discovered by the French missionary Delavay in 1883, but not until George Forrest-collected-seed flowered at RBG Edinburgh in 1914 was it revealed to horticulture. According to the British Alpine Garden Society, "Nomocharis lies mid-way between Lilium and Fritillaria," and all three are choice bulbous gems. 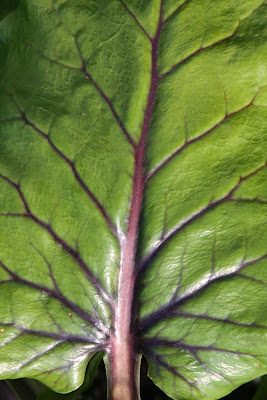 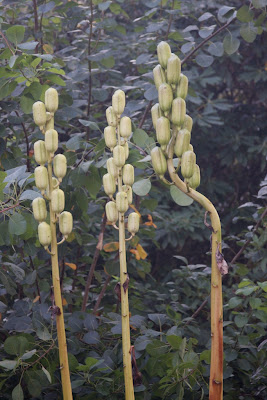 
My main purpose to visit Far Reaches was to see the "Giant Lily" in bloom, in particular their 'Big & Pink" specimen, but as I said, I was a week too late and I decided not to waste my pixels on a flower out of its prime. Maybe next year I will call daily, and dash up there at the perfect time, and at least now I know the way. There were other, more white, Cardiocrinums in bloom, and one stalk displayed a strange crook, as if it knew the top of the lath house was coming soon, and it would need to duck under. The Far Reaches Folks (FRF), as with most growers of the genus, leave the ornamental seed pods which last for a long time. You've seen it before, but I can't resist to again show our watermelon man sitting on the bathroom window sill with a Cardiocrinum stalk, and they have been together for three years.


The FRF (folks) have a couple of exuberant specimens of Paris in their lath house, and they certainly respond favorably to the manure application (as Far Reaches is 100% organic). I'm not organic, but part of me wishes that I was. I have seen Paris, a Trillium relative, in the wild in Nepal...or just where was I? The past trips kinda run together. But I remembered being charmed by the woodland native, from about 7,000' elevation, even before I knew what a Paris was. At Far Reaches, they know more about what they're doing, and take a more systematic approach to plant collecting. It also helps that they surround themselves with knowledgeable plant-people, whereas I usually travel alone in my simple ignorance. So I'm only guessing that my Paris (from Nepal?) was the species polyphylla. FRF grows a Paris polyphylla var. yunnanense which was far more robust than the dinky ground-hugger that I saw years ago in Nepal.

FRF also grows a delicious specimen of Paris japonica, which before my visit, I didn't know even existed. The Japanese "Canopy Plant," or kinugasaso, blooms in June to July with a star-like flower that rises above about eight leaf sections. After witnessing their wonderful specimen, I began to research all things Paris. Geeze, I discovered that Paris japonica has the largest genome of any plant yet assayed, about 150 billion base pairs long. And, if true from Wikipedia, "with 150 billion base pairs of DNA per cell (a genome 50 times larger than a human), Paris japonica may possess the largest known genome of any living organism...and that the flower has 19 billion more base pairs than the previous record holder, the marbled lungfish." I certainly didn't realize at the time that I was looking at an example of extreme science. My God, what an interesting career I've had! When you think about it, FRF, one of the greatest plant collections on earth...yes...exists on an old cow pasture, at the very tip of the United States...a destination that attracts many of the greatest plants-people from around the world. To think: I employed Sue for a year, after she moved west from Vermont fifteen years ago, but she certainly went on to improve herself. Her current success had absolutely nothing to do from me, other than to provide perspective on how dull a career she might have endured in my terminal employ. I regret that I don't have a photo of Sue – she would have shucked it off anyway, and all I can show from my visit are the chubby fingers of husband Kelly who is holding the Nomocharis flower. 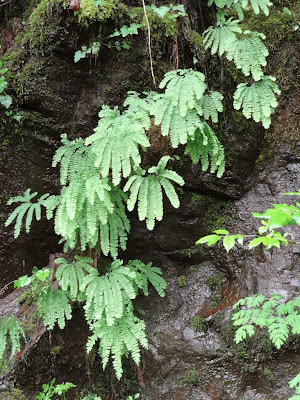 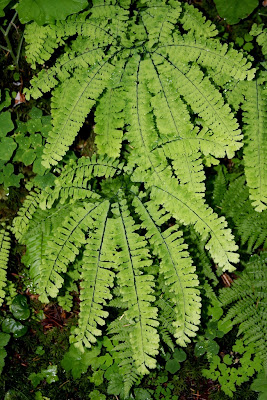 Happy as heck in the lath house, lushly growing in the processed horse shit, was a rambunctious clump of Adiantum venustum, the Himalayan "Maidenhair Fern." Our native species is aleuticum, and I see it frequently on day hikes in the Oregon woods. The genus word Adiantum comes from Greek meaning "not wet," due to the fronds' ability to shed water. Frond is from Latin frons for "foliage." Venusta is a Latin term for "beauty," and Venus is the Latin goddess of "Love," but unfortunately venereal is from Latin venereus to denote "disease of the love regions." Yikes!

It just so happens that I have a Fern Friend, one Sue Olsen from Bellevue, Washington, and my ramblings about ferns prompted me to pull her encyclopedic book from the shelf. All you need to know about ferns, and more, can be found in this definitive work. I have resisted to collect ferns, mostly because the subject is so vast and my brain is already at capacity. If I allow entry of anything new, such as the study of ferns, then something else must necessarily exit. It's known as the "Sopping Sponge Syndrome (SSS)." But anyway, check out the Encyclopedia of Garden Ferns, a Timber Press publication. 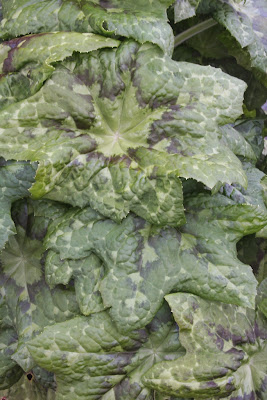 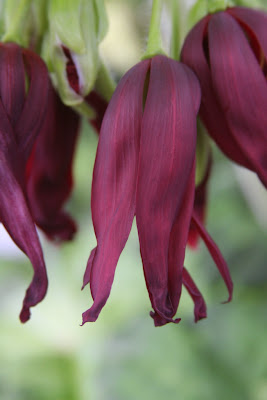 Equally impressive were the Podophyllums. The hybrid 'Red Panda' was raised by Northwest Garden Nursery, and is a cross between Podophyllum delavayi and pleianthum. Earlier in the year the leaf color is more red than in the photo above. The parent, delavayi, is nice enough on its own, without any crossing. The "Chinese Mayapple" is native to southwest China and the FRF seedlings, shown above, displayed lushly mottled leaves. The flowers were mostly finished at the time of my visit, but they are deep red in color. The green seed pods, or "apples," appear in July, and in my thinking the common name should be "Julyapple." Be careful where you plant the various species, as they can run all over the place; but in the right spot that can be a good thing. We are famous for our huge specimen of Podophyllum 'Kaleidoscope' which resides in a four-foot square box in Greenhouse 20. A friend refers to Podophyllum pleianthum leaves as "tractor seats," as the leaves can get quite large when sited in fertile well-drained soil in a shady location.

I'll mention one final plant, one that none of you knows anything about, Exbucklandia tonkinensis. Yes, they collected it in Vietnam on one of their world adventures. It is doubtful that this species would be hardy in the northwest, but who knows? I noticed a shedding leaf which took on an orange hue, so I presume fall color will be fantastic. Or maybe not, because maybe Exbucklandia is evergreen. And that kind of sums up Far Reaches Farm anyway, that at first, only they know about these exotic species. Similarly, they have collected various species of maples, a birch from Vietnam, and much more. Sue and Kelly could easily have named their nursery Far Out Farm, and you are encouraged to exchange your money for their cool stuff. Ok, now go ahead and google them.