Today's web log (or "blog," as most of you would have it; a word I detest since I first heard it, as it sounds like an intestinal disorder) is on variegated conifers. Possibly every conifer species has a variegated form, attractive or not. Our nursery alone has introduced ten variegated cultivars; and even more if I include plants with new shoots having a much different color than the older foliage, such as Picea pungens 'Spring Blast' or 'Spring Ghost'. I will not include the "needle" conifers as variegated, if the undersides are a different color from the top, since most are. Sometimes these conifers can have vivid undersides, such as with Abies veitchii 'Glauca' or Abies koreana 'Silberlocke'. 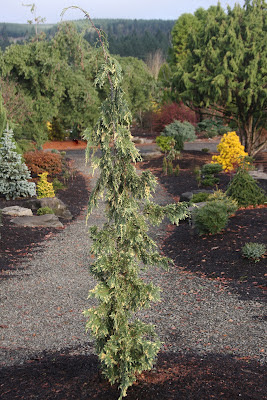 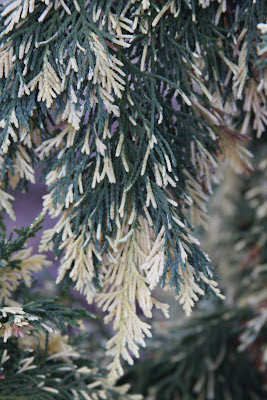 The ten from our nursery are Abies amabilis 'Indian Heaven', Chamaecyparis lawsoniana 'Phil's Flurries', Chamaecyparis nootkatensis 'Laura Aurora' and 'Sparkling Arrow', Chamaecyparis obtusas 'Moonshine' and 'Sunshine', Metasequoia glyptostroboides 'Lightning', Picea abies 'Gold Dust', Sciadopitys verticillata 'Mr. Happy' and Tsuga mertensiana 'Mountain Light'. Some of them will be around long after me, while others will faze out when I faze also. The real money-maker from the group is Chamaecyparis nootkatensis 'Sparkling Arrow'. It resulted from a white mutation on a 'Green Arrow'. So we get the same narrow form, with fairly even white and blue-green color. It can be grown in full sun in most locations; and it actually looks its best in winter, and it never has reverted like the old, discontinued clone, 'Variegata'.

A couple of variegated Abies are worth mentioning: Abies amabilis 'Indian Heaven' and Abies koreana 'Gelbbunt'. 'Indian Heaven' was discovered next to the road on the way to the Indian Heaven Wilderness near Mt. Saint Helens in Washington state. 'Gelbbunt' is a German selection, meaning "yellow-colored." Neither will become common household plants, but you have to admit that the 'Gelbbunt' looks especially nice when placed next to a pretty girl.

The genus Chamaecyparis is loaded with variegated selections, as all species seem inclined to produce color or form mutations. I'm not aware of a single variegated cultivar that originated from seed. We are now able to proudly provide -- "proudly" because we graft every cultivar of Chamaecyparis lawsoniana on Disease Resistant Rootstock (tm), which most other growers do not...and consequently a large portion of theirs will die on their own roots...while the irresponsible grower laughs his way to the bank--so proudly then, we now produce a number of choice lawson cultivars "responsibly." 'Phil's Flurries' originated as a mutation atop 'Green Globe', as seen in the photo above. 'Silver Threads' forms a compact pillar of blue-green foliage speckled liberally with cream-white. It can withstand full sun in most areas.

Chamaecyparis nootkatensis 'Laura Aurora' was introduced by us twenty five years ago. It was a yellowish mutation from a nootkatensis 'Pendula', and for me has always grown as a compact bush. The photo above, taken in Holland at a fellow-collector's garden, suggests, however, a more upright and weeping form. Like blind men when describing an elephant, 'Laura Aurora' is difficult to pin down. At its best it is very pretty, but it never took off commercially like 'Sparkling Arrow', which has been described above. The point is that, at their beginnings, I could never have predicted how either would have fared. The same is true with many of my projects and ideas and discoveries: some are great and others turn out to be dismal, embarrassing failures. But better to have loved and failed, than to never have loved at all, as they say...I suppose.

Variegated Chamaecyparis obtusas, the Japanese "hinokis," are a welcome addition to the world's gardens. 'Mastin' is a perky selection, with a green base almost entirely overcome with sparkling white. Even in Oregon's arid summer climate, it has never burned. 'Mariesii' we also grow, and it is nearly identical; in fact, when we once mixed them up, we dumped the entire crop, as there was no hope to correctly separate the two. The history of Buchholz Nursery is rife with goof-ups and blunders; so just imagine the horticultural nightmares that emanate from the more stupid, the more unconcerned and the more greedy growers. I know that the ultimate plant consumer cannot possibly follow or appreciate my efforts on their behalf.

Ginkgo? Why is a Ginkgo in a variegated conifer log? As some of you may know, many plant references place Ginkgo with the "conifers." Pollination is accomplished by motile sperm, an act I've never witnessed firsthand, but take my word for it, and you can even watch Ginkgos doing it on the internet. So, conifers then. There are a number of variegated selections, but for me they all revert eventually. Still, some of the leaves are spectacular, as with 'Majestic Butterfly'. But back to the sexual expressions of the Ginkgo, they can also change sex, or become bisexual anyway, and this has happened at the nursery. In other words, a male clone like 'Autumn Gold' can produce female fruit. The theory is that a female seedling used as rootstock can influence the top of a male. I'm no Mr. Science, but my wife has a lot of influence over me for sure, so I just hope that nothing too odd develops.

I'm not a fan of variegated junipers, since often the white or yellow portions can burn. However, Juniperus squamata 'Floriant' can have its moments. This variegated form of 'Blue Star' is ultimately short-lived however, or rather, short-useful, because with age it browns-out in the middle and tends to flop. 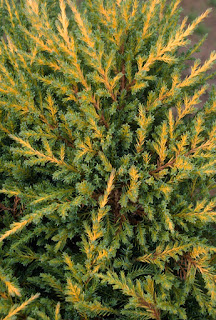 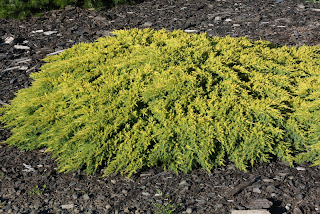 A wonderful long-term juniper is Juniperus chinensis 'Daub's Frosted'. From a distance you wouldn't call it "variegated," it's just golden. But on close inspection you notice that the foliage is green in the middle, with vibrant golden shoots protruding. It will grow to one foot or less tall by four feet wide in 10 years, or can be staked into an upright little tree. 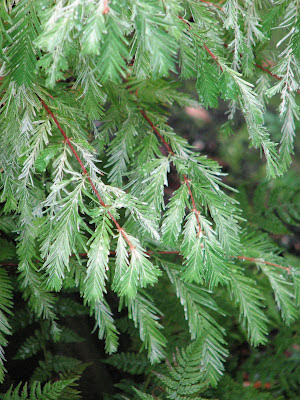 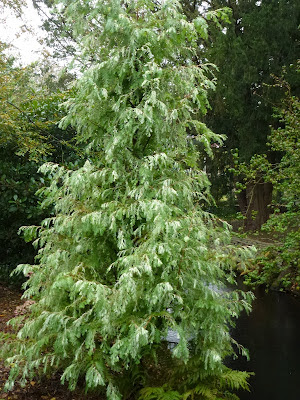 Metasequoia glyptostroboides 'White Spot' is a variegated "Dawn Redwood" with light green foliage blotched with white. I used to not care for it, and don't even have one anymore. Then I saw it looking absolutely beautiful in the rain at Arboretum Trompenburg in Rotterdam. Gert Fortgens, the director, told me the secret was to keep it pruned. A fantastic mutation did occur on 'White Spot' in Germany. This dwarf happy-looking conifer is called 'Schirrmann's Nordlicht' in Europe, and we were given permission to give it the translated name 'North Light' in America (However we use both names on every label when they are sold). 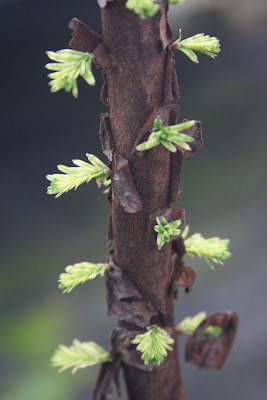 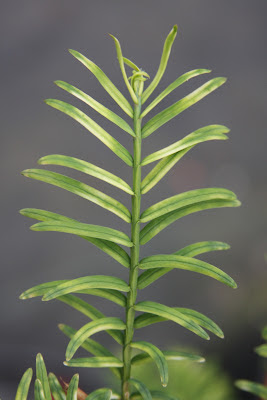 Metasequoia glyptostroboides 'Lightning' is new from Buchholz Nursery, but we haven't trialed it sufficiently to compare with the excellent cultivar 'Silhouette' from Kools in Holland. 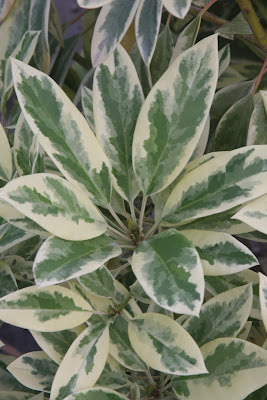 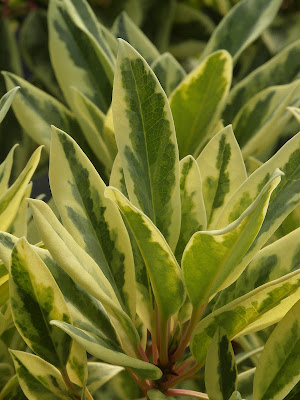 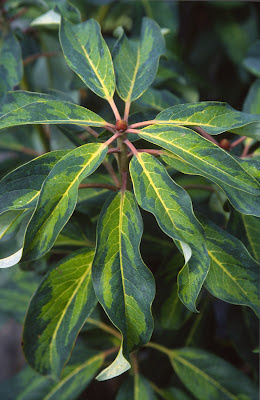 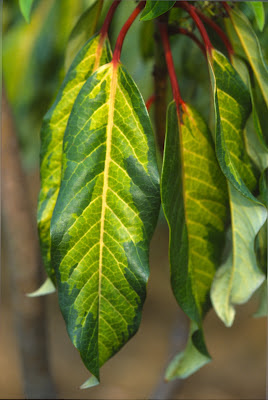 
I once visited a garden in Japan with a fantastic collection of variegated plants. The problem was that every plant was variegated. It left the visitor dull on the whole, even though I could admire some of the contents. It featured variegated Paeonia, Daphniphyllum, Osmanthus, Acer, Fatsia etc. Just everything, and I vowed that was something I'd never do. My wife tells me that the garden no longer exists, that the owner has moved on to another whim. And I'll move along now too, as I've had my fill of variegated conifers for one post. I might indulge you with more next week. Just remember to garden with them sparingly.