...more on maples, as still I haven't tired of them. Certainly I will by August. Then later in fall, once again, they will redeem themselves with brilliant color. 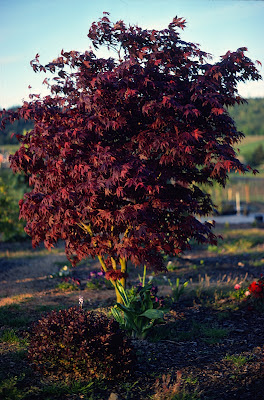 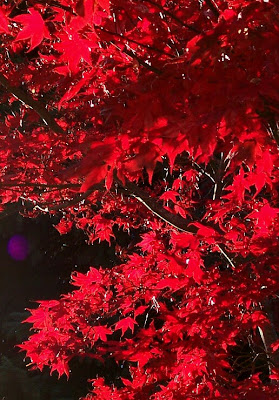 Acer palmatum 'Bloodgood'
But, in mid July, what still looks good? Well, most cultivars actually. Many nurserymen and gardeners have grown callous to the purple-reds, both the uprights and the mounding laceleafs. They are ubiquitous for sure, and can be found in every type of landscape. I can show you a decent-looking 'Bloodgood' in front of a dilapidated white-trash trailer, and I have to applaud the dwellers for having spent part of their welfare check on a great plant. More likely they stole the tree, but at least they took a classy plant over a toilet with petunias.

Speaking of trash, a trailer neighbor resides at the beginning of the back-road entrance into our nursery. They and their drug friends park on my road, and then look surly at me as I wait for them to move. Their scabby horses jump their poorly-tended fences and trample through our display garden. For thirty two years I've had to hold my breath as I pass these low-lives. They keep breeding, and every sixteen years or so, I'm presented with another generation. 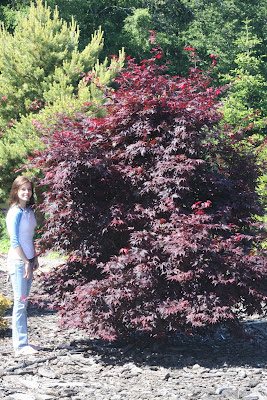 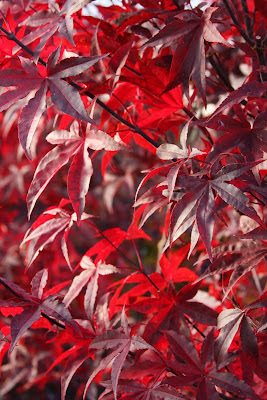 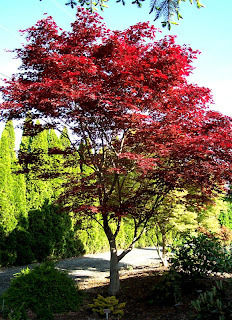 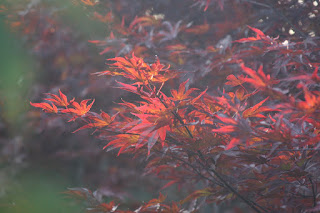 But, once I pass their abomination, I enter Aka ji, the "red way." This is our west entrance that is lined on each side with red maples, both red uprights such as 'Bloodgood', 'Red Emperor' and 'Fireglow', as well as 'Tamuke yama' laceleafs. I feel rather regal as I drive past these color-enriched specimens. They are just as blood-red in July as they were in May. If given adequate moisture the leaves never burn or fade. They are "cracking" trees, as the British say, meaning trees that are always attractive, and that any idiot can grow.

The only problem is that every Harry Dick and Tom decided that they needed to grow them...by the thousands. When many of these foolish maple pretenders gripped over the bad economy, or went bankrupt, prices plummeted. As you all know, you can now go into any home depot-type of garden center and find a retail-priced red at less than my wholesale price. I can point out all the reasons why it is inferior to my product, but still it can be an adequate addition to a mediocre landscape, which describes much of America. However, I'll continue to ride my high-horse, with my approach to growing plants, and try to give the world something better, and hopefully at a fair price.


Ok, enough about the neighbors and the red maple glut. Greens still look fresh in July, as I was reminded when I recently passed Acer palmatum 'Emerald Lace'. The foliage is finely-textured and fresh green with light green new growth. The first one I ever planted in the garden was given adequate room, for at least ten years I supposed. Ha! After three years it was smothering other plants and had to be removed. Acer palmatum 'Spring Delight' is another low green laceleaf, my introduction of twenty years ago. It is also fresh green throughout the summer, but features a reddish fringe on the new growth. 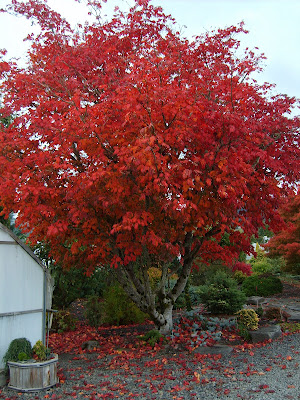 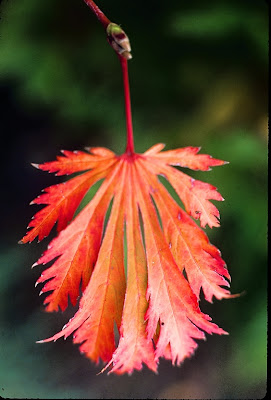 
Acer japonicums continue to look well in the summer heat, but I admit that I find them a little boring now. Spring foliage and pretty flowers make them special in May, and then of course their color drama in fall amazes me year after year. 'Aconitifolium' is a terrible name to pronounce, so I prefer its Japanese name, 'Maiku jaku' which means "dancing peacock." 'O isami' and 'O taki' are similar, and are both vigorous medium-sized trees. 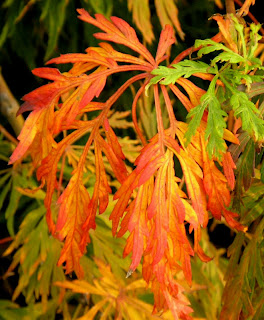 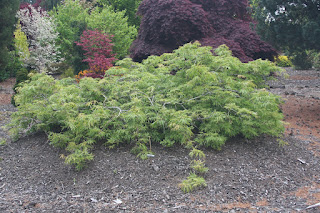 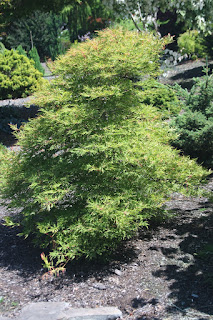 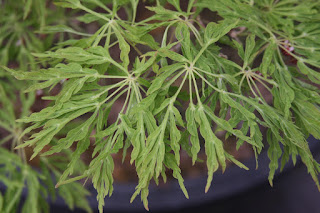 Acer japonicum 'Ao jutan' was a seedling selection from the late Edsal Wood, and I introduced it about fifteen years ago. Leaves are quite large, and dissected all the way to the petiole. I honestly don't remember if I have the original tree, or if I have one of the first grafts. In any case, my 'Ao jutan' has sprawled to at least fifteen feet wide. And then a nice contrast to 'Ao jutan' is 'Fairy Lights', an Australian introduction, but its leaves are much smaller. 'Fairy Lights' is cute with an irregular upright form, looking like the last tree on a mountain top.

Acer palmatum 'Geisha Gone Wild' actually looks its best in July, especially when growing in full sun. The photo above was taken in early morning, with the sun as backlight. A row of trees in the field glows in a way that makes the other cultivars look dull.

Most of the reticulated varieties fade by July. The "Ghosts" become tired for the most part, and so does 'Amagi shigure' and 'Mikazuki', two of the most important of recent maple introductions. However, by the end of July, new growth appears, and we imagine that we are once more back into spring. 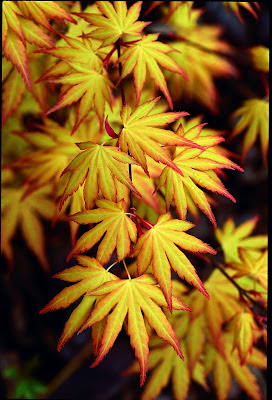 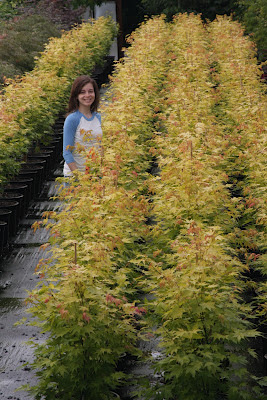 I get a kick out of my oldest Acer palmatum 'Orange Dream'. This behemoth dominates the display garden, and soon will crowd out the peonies and dwarf conifers. I planted it only fifteen years ago, yesterday in other words, but now it is spreading at a pace that exceeds the world's population. The "orange" of this dream appears in late April to early May. When the 70 degree days evolve into the 80's, foliage changes to yellow, and you wonder about the name. Eventually the temperature will spike into the 90's or the hundreds, and 'Orange Dream' changes to bleached-white. It then reminds me of Acer palmatum 'Shiro', which turns noticeably from green to white after a hot day. Acer palmatum 'Akane' is far more impressive in spring, so is therefore the more impressive clone in May. But now in mid July the 'Akane' plants have largely defoliated, while the 'Orange Dreams' are still looking good'. What is the "best" cultivar is entirely up to your individual growing conditions and the time of year. 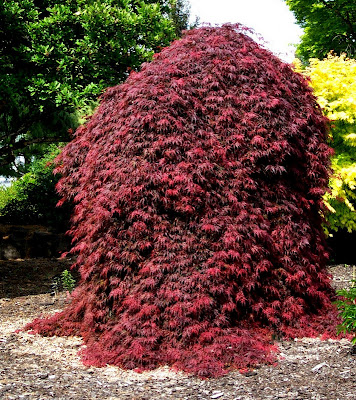 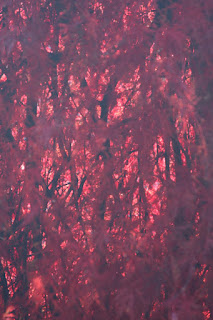 Acer palmatum 'Orangeola', dumbly named by a plant broker, was one time described (in Maples of the World) as a Greer introduction. It was absolutely not. I originally listed it under the name of Acer palmatum 'Orange', as I simply could not tolerate the name 'Orangeola'. A clod brush-broker should never be allowed to name a plant, ever. Someone asked me the other day why 'Orangeola' "took off" in horticulture, while the nearly identical 'Brocade' of earlier origin did not. I do not know the answer, except to suppose that stupid names can prevail. 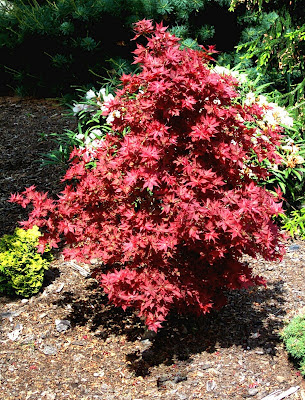 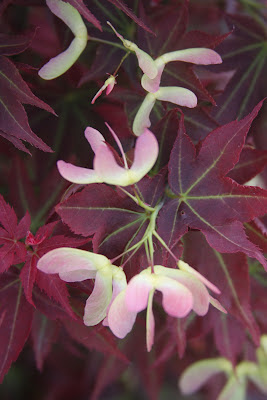 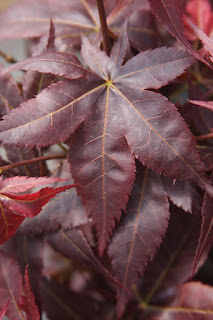 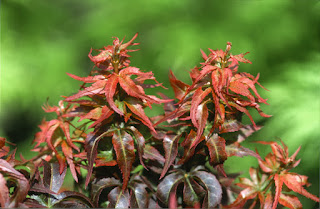 'Ruby Stars' is a stubby little dwarf with ruby-red leaves in spring. They fade to green-red by July. Then, miraculously, new growth appears again in July: little bright-red star-shaped leaves are sprinkled amongst the older, dull foliage. So, great in May, but even better in July. Somewhat similar is 'Kurenai jishi', or the "dark purple-red lion," which is difficult to photograph because it is so dark and glossy. 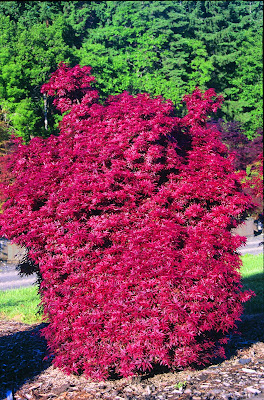 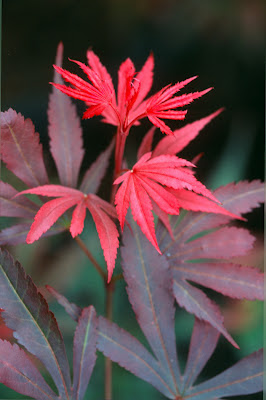 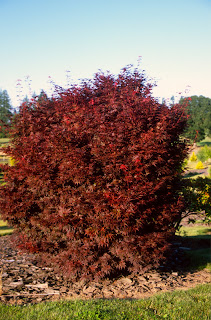 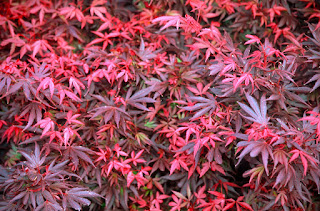 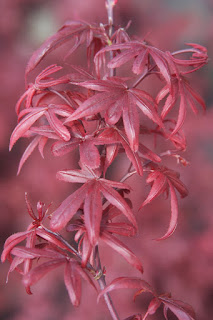 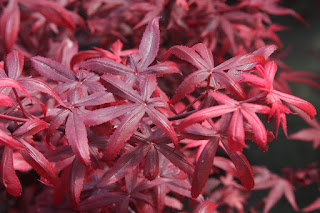 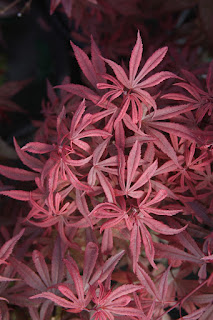 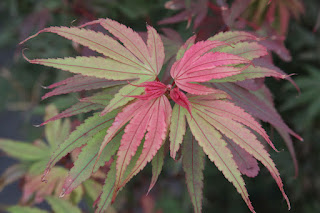 Purple-red dwarves abound. 'Shaina' is a summer classic, and we've enjoyed it for nearly 25 years. 'Skeeter's Broom' was named by, or for, Skeeter, and will grow to twice the size of 'Shaina'. 'Fireball' and 'Hime shojo' are newer in America, but are more or less the same, as all originated as witch's broom mutations. 'Kandy Kitchen' is similar, but with a little more orange to the foliage. All of these brooms prefer full sun for deepest color.

'Mikawa yatsubusa' is impressive in July, especially our oldest specimen in our Short Road section. Big-shots have asked me a number of times if it is for sale; in fact once a junior middle-man attached a yard of red flagging tape to it when my back was turned. I always respond, "Yes, it is for sale, but you have to buy the whole farm." I notice that it is loaded with seeds again, and I dream ahead to their germination, for it is quite reliable, and new cultivars such as 'Japanese Princess' have been selected from it.

I'll end with Acer pentaphyllum, a species from China which is endangered. You seldom find it in plant collections as it is not very winter hardy. But it looks good today in our protective greenhouse, since it only begins to leaf-out the first of June. Apparently, the first tree in America was planted in the Strybing Arboretum in San Francisco. When it failed to produce new growth one spring, it was put on the to-dump worklist. By the time the workers got around to the task, new growth had begun, and so it was fortunately saved. At one time there were more growing at my nursery than what was left in China. Acer pentaphyllum can be propagated from seed, by rooted cuttings in summer, and curiously, by grafting onto Acer rubrum rootstock, and I imagine other Acer species as well.

For sure, this is only a fraction of the maples that are attractive today. One potential customer, who was not familiar with most of the cultivars, accused me of taking photos only when the trees looked their best, and so how could he judge what they looked like for most of the year. That is correct of course, and I also doubt that a super-model is photographed when she first wakes up in the morning. I have plenty of cultivars afflicted with mildew, or with scorched leaves, and I likely will not record their agony. Still, if you walk through the collection in mid-July, you'll see some very nice trees.

So July is a month when the world is old and tired, but at the same time: young and hopeful. Many friends are recently retired; but I'm just old and tired. As the maples, and other plants, renew themselves in summer with new shoots, I too become energized. I can endure the 90 degree F heat, and my pedometer says I walked 16,378 steps yesterday.

Posted by Talon Buchholz at 2:05 PM