On Sunday afternoon I finished my work. The bills were paid and plans for the coming week were reviewed. I was anxious to return home, to keep my promise to my wife, that in the afternoon I would stop working and own up to being a wonderful husband and father. Often, work is easier than that.

But, first, one small task was to photograph a cutie in a greenhouse--our one and only plant of Leptospermum scoparium 'Kiwi'--which is currently blooming its heart out. Leptospermum is the Australian-New Zealand "tea tree," so named when Captain Cook and his crew used the leaves to make a tea to prevent scurvy...which didn't work. The cultivar 'Kiwi' is very dwarf and choice, but unfortunately is only hardy to USDA zone 8. All visitors fall for it though, as it is ideal in a bonsai pot, so perhaps one day it will enter into our production.

So, with camera in hand and charged batteries, I cut through the Display Garden to get to my 'Kiwi'. Of course, I can't get through the garden without pulling a few weeds, adjusting some labels, and speculating that I'll need to edit a certain tree from the landscape, which way-too-quickly outgrew its place.


I got a little bit side-tracked with other plants, plants that looked especially nice on this June 10th afternoon. Our little patch of Limnanthes douglasii, a plant from western North America, showed pretty in the light. Although an annual, this "Meadow Foam" or "Poached Egg Flower" will re-seed, and before you know it, it can cover a large area. California's central valley grasslands can have patches of an acre or more, as seen above. 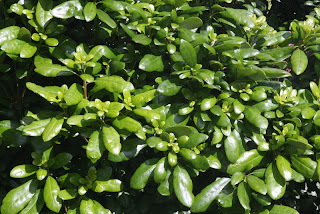 Rosa moyesii, an upright shrub to 12' tall, comes from China. I'm not really a "rose man," but the cultivar 'Regalia' pleases me every year with a profusion of deep red flowers with golden anthers. It is a simple flower, but when hundreds of them appear on a mature bush, the effect can be stunning. Nearby, but fortunately not too close (as the colors would clash) is a blooming Rhododendron daphnoides. Our old specimen is 8' tall by 8' wide with handsome, small recurved green leaves--an attractive shrub in winter. Of course, now it is a lavender ball, a large orb in view from my office window. All right, I admit that I don't really care for the blossoms' color, but apparently the butterfly does. 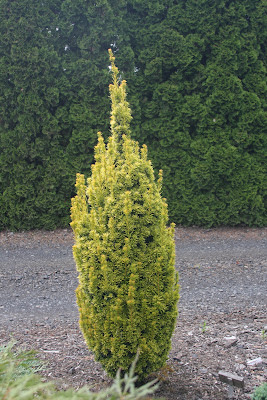 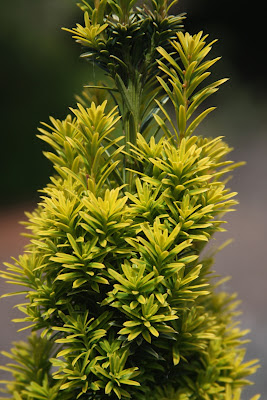 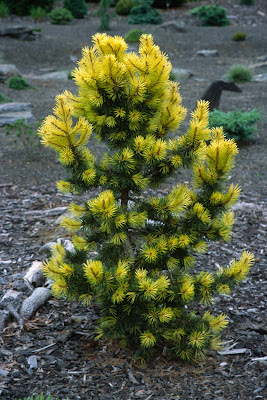 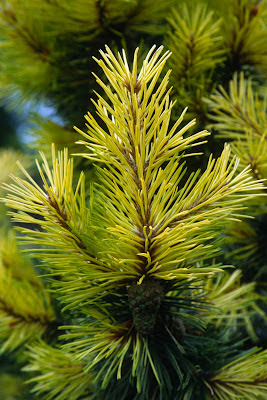 It's impossible to miss a slow-growing pillar, Taxus baccata 'Golden Dwarf', in the late spring. Most of the year the foliage is green, but for a couple of months the vivid gold is priceless. In Europe, it is known as 'Goldener Zwerg'. Similarly, in spring the "Golden Lodgepole Pine," Pinus contorta 'Taylor's Sunburst', will be transformed by rich yellow shoots that contrast spectacularly with the older green needles. 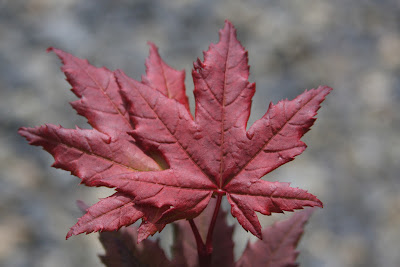 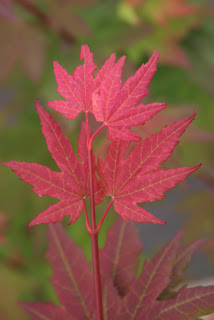 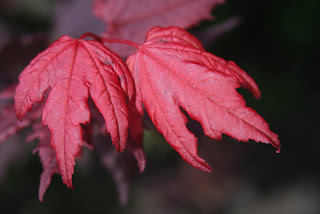 
A couple of "Vine Maples" were showing off this wonderful June day. 'Burgundy Jewel' is a recent introduction from Gordy Halgren in Washington state. If planted in full sun, the leaves will develop into a rich purple color. New growth is orange-red, and when backlit it can look like a purple mound with hair on fire. The seed is produced with a blood-red color, and in winter the young shoots are dark-red as well. A nice counterpart to 'Burgundy Jewel' is 'Pacific Fire'. The foliage is basically green, but today the new growth is bright orange, both the leaves and the stems. All of that is attractive enough, but the best occurs in winter when the branches glow with coral orange-red, the "Vine Maple's" answer to the 'Sango kaku' palmatum types. 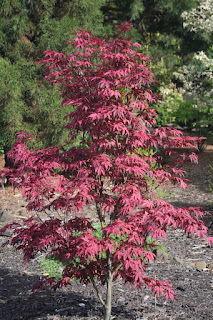 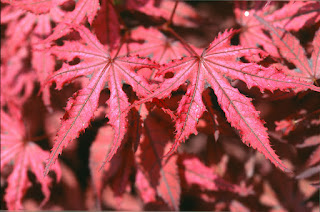 My "shortcut" through the Display Garden grew increasingly circuitous. After all I couldn't quickly pass by my newly planted Acer palmatum 'Amagi shigure. I first saw this cultivar in Japan one spring, and thought, "yikes, how did they get my 'Purple Ghost' already?" That was impossible as I hadn't sent it to Japan at that time. Yet, something looked a little different: 'Amagi shigure' was a more brightly-colored brick-red than the deeper purple-red of 'Purple Ghost', while also showing prominent black veins...something like 'Kasagi yama', a crappy old cultivar that looks great for a couple of weeks, then fades horribly. Besides, 'Amagi shigure' is a more tidy upright grower compared to the sprawling 'Kasagi yama'. 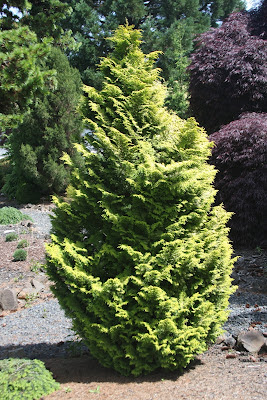 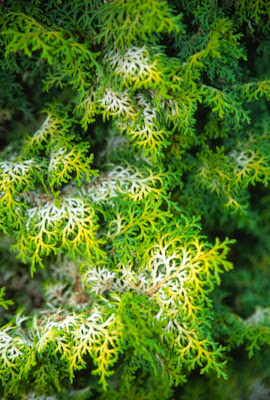 I glanced at my watch nervously, as I hadn't yet reached my Leptospermum, but before me was an old friend, Chamaecyparis obtusa 'Melody'. This golden hinoki pillar has been described before, and it's not my intention to shove it down potential customers' throats, but today it looked especially nice. The form, the lacy foliage, the way it captures spring light: it promotes itself without the need of a self-serving nurseryman. 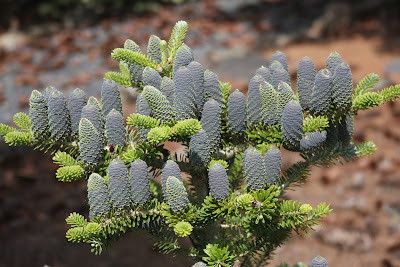 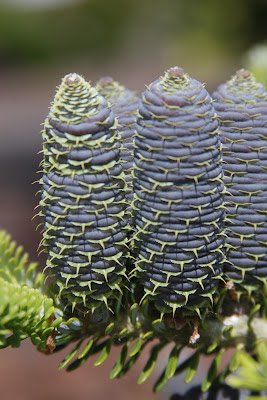 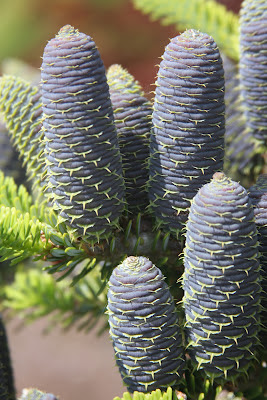 A couple of conifers further delayed my progress. An Abies koreana featured little solider-like cones along the branch top. My slow-growing specimen is actually labeled cultivar 'Nigrans'. Or, it could be var. nigrans; I don't know as I can find nothing in the literature. Also, my source has been lost, when a far-less-than-adept (past) office employee pushed a few wrong computer keys and wiped out a lot of historical information. Curiously, she grew angry at me, blaming me for expecting too much precision about details that didn't really matter anyway. Sorrrrrrry. But I guess she was probably right, and I should let it go. The other conifer grows nearby, Pinus densiflora 'Edsal Wood'. This was a seedling selection from the then busy, but now late, Edsal Wood. I got my start from Don at Porterhowse Farms a dozen years ago, and it is an attractive bright-green miniature ball. Mr. Wood didn't name it after himself; I think that was Don's doing...kind of like when I named a tiny dwarf mugo pine after Mr. Wood. Yes, I've railed before about using people names for plant cultivars, and then I went ahead and did it myself. But that was about 20 years ago; and besides, Mr. Wood was truly a wonderful man, and a most generous plantsman.

Ok, finally I entered the 'Kiwi' greenhouse and dutifully took a couple of photos. I'm not good at "taking" photos, as you can see with the example above. But the flowers were almost past, and I wanted something before their decline required another year's wait. Actually, I hate taking photos as an assignment. The light is never right or the subject is too crowded, or something else makes the photo useless. But often a potential customer demands to see what he is buying. So what can I do? I "take" a photo. Today, I was not "taking" photos, other than 'Kiwi', rather I was "receiving" them. The images were coming to me. I'm really just a mediocre photographer...but of great things. You would be too if you worked here. Two of my most favorite photos (see below) were not planned events, they were just two magical moments, a case of being in the right place at the right time.

'Kiwi' was captured, but still I lingered...even going into another greenhouse, a greenhouse full of relatively new maple cultivars. I'll tease you with a few photos now, then we'll plan an extended visit next week. 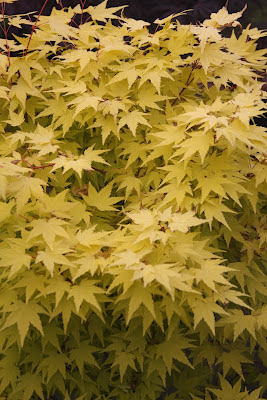 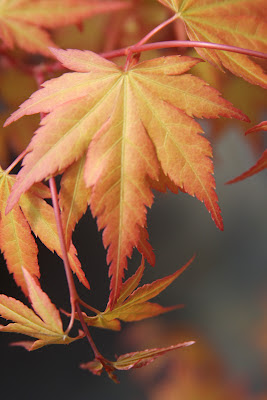 Hurry, hurry...but ooh, look at the foliage on that tree! Then, almost past the pumice stone house...but who could resist some of the special plants within?

Finally, I locked up and sped home. Certainly I would be in trouble. But it turned out that nobody missed me--all three of my women were preoccupied and none of them uttered a greeting. I rolled up my sleeves and enthusiastically asked if anyone would like tea, anxious to atone for my absence. Anyone? Only the dog seemed to notice that I had returned.
Posted by Talon Buchholz at 1:23 PM