Last week I drove into the lush Willamette Valley with a friend in search of peonies. My mission was recreation--to "re-create" myself. Normal working people do the same; they take a vacation from work, hoping to experience a different life, which may then provide energy...to tolerate the mundane back at work. My friend harbored no lofty creation theories--he is just into peonies. But for me: I was goofing off yet again, going where I had no need to go, wasting good working hours to squander time at flower farms.

We drove south, through the heart of Oregon agriculture, past enormous grass-seed farms, fields of sheep and cows, and of course, past hundreds or thousands of acres of ornamental nursery crops. Just outside the town of Brooks, Oregon, a riot of color greeted us, at Adelman Peony Gardens. The display garden is visible from the road, and how could one drive past? This floral extravaganza was rather bombastic, but just what I needed to re-create myself. Instead, I could have driven on...to Las Vegas perhaps, and debauched myself on drink, gambling and showgirls. So, with that perspective, hanging out with flamboyant flowers seemed quite tame.


I don't really care for the big, gaudy peony blooms, especially the doubles. I do like some of the dwarf forms, as they can have pretty finely-textured foliage. And the fairly new intersectionals, those hybrids between herbaceous species and the woody tree peonies, they can be attractive. I already have a couple of Paeonia 'Border Charm', which features yellow blossoms. At Adelman's, a yellow that surpassed 'Border Charm' in my opinion, was 'Alice Harding', which had a clear, more intense yellow color. 'Bartzella' featured a large, cream-yellow flower, and I know that it has been in the trade for a while. The common denominator for the intersectionals (also known as Itoh, as they are named for Toichi Itoh, the first hybridizer to cross tree and herbaceous peonies) is their high cost. But the Itoh's are known for an extended blooming period, and valued for large blossoms and lush green foliage. So, pay up or garden with pansies or something else instead.

I also noticed about peonies, was that they share the same "type" of names as roses, hostas, daylilies and other popular plants: named either for the hybridizer (occasionally)--bad--or named with some goofy connotation such as 'Miss America', 'Shirley Temple', 'Command Performance' and the like. No further comment. I don't know anything about the cultivars which follow; the photos will have to speak for themselves.

Wow! Do you love them or hate them more? A good feature about any "theme garden" is companion plants. A few Japanese maples fit in well, as did a smattering of conifers, a lurid Allium species, Hebe glaucophylla, Lupinus 'New Generation', Rhododendron 'Scintillation' and a tiny, neat Dianthus 'Fire Star', which I would like to grow.

But enough. Back up north to the Lake Oswego vicinity, our next stop would be the Rogerson Clematis Garden, to another group of plants I know very little about. I reflect on those random situations that led me to be a maple-conifer man, instead of a clematis aficionado or an organic apple grower, or a blueberry farmer like my neighbor. Since my mental capacity is already fully absorbed, plants such as Clematis will likely remain a mere amusement. Other than Clematis integrifolia, a small spreading-bush form, I've grown no other Clematis in my life, but I understand why many gardeners go for them. 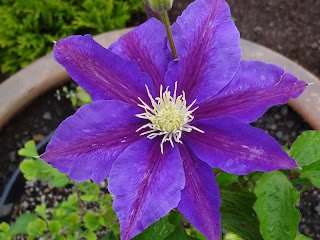 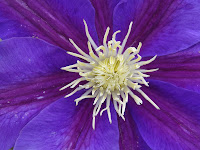 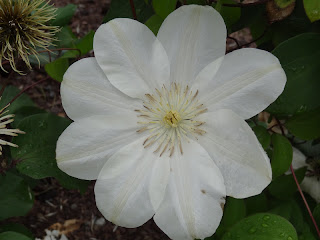 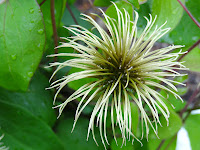 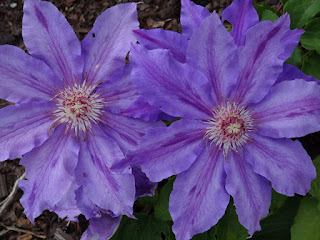 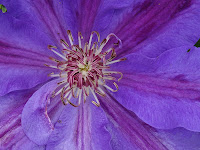 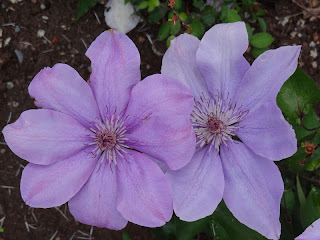 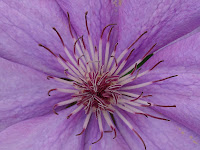 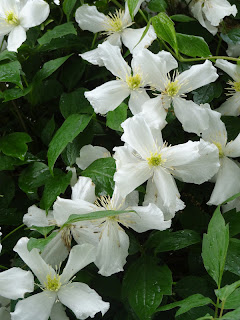 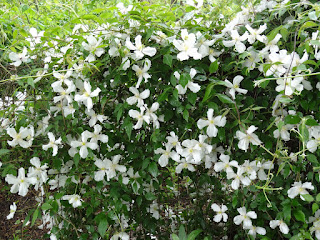 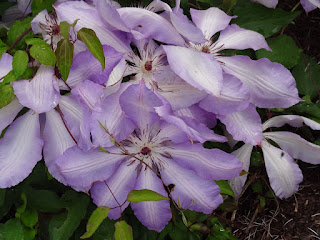 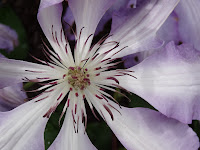 The Rogerson collection is dispersed throughout a small garden surrounding an old farm house. I think upkeep is solely in the hands of volunteers, and of course, they are a little bit behind. Sadly, the labelling is spotty, and I saw many nice vines with no identification. They claim to have 500 cultivars, and maybe there were, but I could identify only about 50. One problem was that the vines would climb over a Rhododendron or another bush, with blossoms draped above and beyond, but just where did the stems begin? But oh well, I had no need to conquer this garden nomenclaturally. 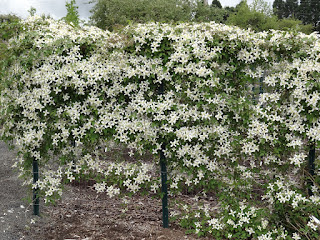 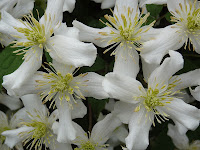 The weather was erratic: one minute of piercing sun would be followed by cold sideways rain. Again, I'll let the photos speak for themselves, as I know nothing more, except to say that I loved Clematis montana var. wilsonii.

A most intriguing aspect to many flowers is the centers, in their sexual expressions. Clematis were usually neat and sweet while peonies were more wildly passionate. My Magnolias back home fall somewhere between these two genera. But in all, one can get lost in a fascinating universe of color and pattern. Georgia O'Keeffe should have been with me today. 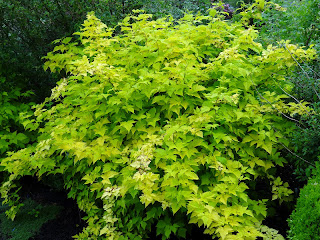 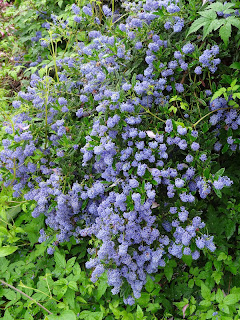 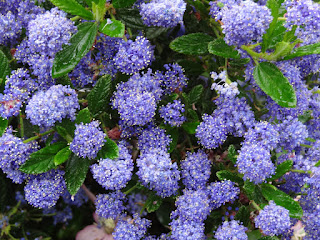 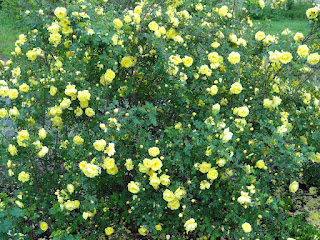 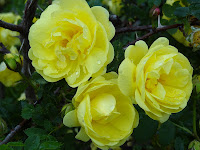 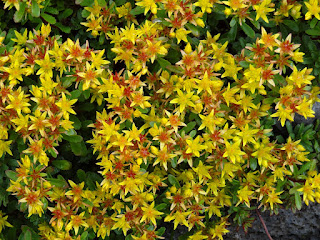 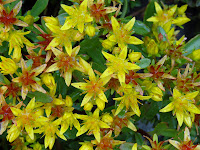 Companion plants in this garden were more abundant than at the peony garden. Rubus spectabilis 'Golden Ruby' glowed in the corner, lovely Iris douglasiana rose two feet high for attention, and Paeonia 'Red Charm' was as nice as any at Adelman's. Roses fit into the garden of course, and I liked the foliage of Rosa glauca, irrespective of the blossoms. Rosa 'Lemon Chiffon' and Rosa 'Sunsprite' also vied with the Clematis. An unidentified Viburnum species had one branch sprawling along the ground like a pinkish-white serpent.

My camera battery gave out after a photograph of Sedum kamtschaticum 'Weihenstephaner Gold', but then it was again raining heavily. I snuck back to work by noon, before anyone had missed me. Thus re-created, I returned to the tasks at hand, only occasionally slipping into fantasies of pom-pom showgirls flaunting their stuff.