I began writing the Flora Wonder Blog eight years ago, beginning in the fall of 2011.

Seth is working at getting photos ready for my upcoming speech for the Maple Society, who will also be visiting here on Oct. 25.

So, since I don't want him to snarl at me with the extra work, today's blog will be a rerun from one of the first, eight years ago.


Autumn color this year was more vivid and memorable than ever…or so it seemed to me (again). I worried that I would miss it, all due to the European trip, but returned to a full month of enjoyment. Now finally all the leaves are down, raked and dumped onto the neighbor's property. We face four months of cold, fog and darkened gloom, just like the previous 39 years of my life. 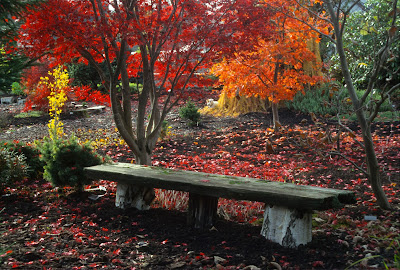 "Color" usually means deciduous trees with leaves, but that's not all. Larix, Taxodium and Metasequoia, aflame with straw yellow to burnt orange foliage, looked impressive, especially on rainy days. The old standby, Larix decidua 'Pendula', has indeed been "standing by" for a long time in our display garden; I would guess it to be 38 years old. My three older children used to hide in it, and demand that I try to find them, but every time I got near…their giggles would give them away.

Larix decidua 'Puli' never disappoints. Its natural habit is that of a low, flat groundcover, but of course it can be staked into a narrow weeping tree. The cultivar name is derived from a Hungarian breed of dog which has curly hair that drops straight down. Larix laricina 'Blue Sparkler' could be called "Orange Sparkler," judging by its color now.

Taxodium ascendens, the "Pond Cypress," shines with orange while the blue-green cones dazzle like Christmas tree ornaments. The species "ascendens" is nomenclaturally comical, meaning ascending, as the branches certainly do, but combines with the cultivar epitaph, "Nutans," meaning "drooping, weeping or nodding"…it makes you wonder what's the what? Well, both happen, and in fall, this soft-green conifer gives you a moment of horticultural delight. Taxodium distichum, the "Bald Cypress," is just as colorful.

Who would think of the "Heavenly Bamboos" as fall-color champions, but certainly Nandina domestica provides an orange-reddish presence to the autumn landscape. The cultivar 'Moon Bay' is wonderful in late November, and 'Wood's Dwarf', from Oregon's late Edsal Wood, develops into a spectacular orange-red ball, lasting throughout the winter. Perhaps the most fantastic of all is the cultivar 'Senbazuru', a charming little curiosity with tiny, wiry leaves. This little miniature treat turns to red in November, and is delightfully bejeweled with sparkling silver pearls when it rains.

Ok, let's get to the maples. Whenever I invite someone to visit the nursery in autumn, I am usually thinking that they'll get their money's worth with a tour of the Acers. August, September and the first of October can be dreadful in a maple nursery, the fresh spring leaves are ravaged by long 95-100 degree weeks, but fall color is the redemption that we so long await. Acer palmatum 'Festival', a new selection, is noted for its yellow and orange October leaves. Acer palmatum 'Geisha Gone Wild' was the most impressive cultivar from spring through summer, yet still elevated itself to a higher level of color in the fall. Acer palmatum 'Orangeola' and 'Adrian's Compact' treated me to a November 16th birthday's present of back-lit orange and red; for sure, no one has ever received a comparable present.

My God, my jaw dropped open on a November Sunday, when I wandered the nursery alone. Magical things happen when I can be with the plants, with no distractions from employees, customers (sorry) and crop-production issues. Wow!, the Stewartias were spectacular, with S. henryae 'Skyrocket' an intoxicating wine-red color. S. monadelpha 'Pendula', new from Japan, will be a high-priced favorite, with numerous pearl-white flowers blooming in July, then followed by yellow-orange-red leaves in autumn.


So how did Buchholz Nursery get this oriental treasure? Well, my Japanese wife, Haruko--beautiful and then in her twenties, skilled at floating with old nurserymen (like me)--she impressed upon Japan's Mr. S. that it would be wonderful to have a weeping Stewartia in America. The following winter, I received two plants, as well as a weeping pink-flowered Styrax, 'Momo shidare', a compact white-flowered Styrax, labeled simply 'Dwarf' and another dwarf named 'Pink Compacta'. Also in the shipment were two variegated Davidias, 'White Dust' and 'Aya nishiki'. And more: a variegated Daphniphyllum--tentatively called 'Variegated'.

Perhaps the most useful present in this fantastic shipment was Cornus kousa 'Ohkan'. Mr. S-san gave me this variegated "Oriental Dogwood" which features lovely cream-white and green variegation in summer, followed by purple, red, green and yellow leaves in fall. Ok, I'll stop being coy, Mr. S-san can be identified as Akira Shibamichi, the godfather of Japanese nurserymen. Furthermore, after a long spring plant day that stretched late into the cold evening, he treated me to way-too-much warm sake at the local restaurant, and we both glowed with happiness. 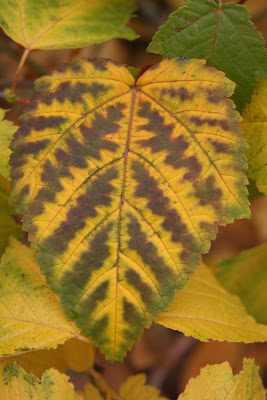 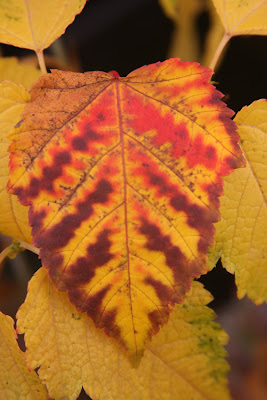 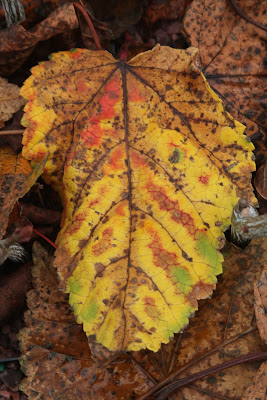 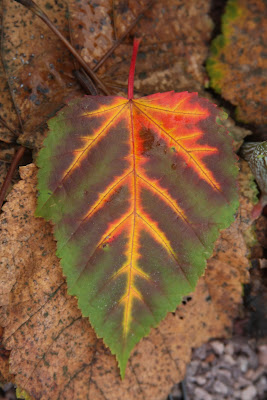 Back at the nursery my happy day was culminated by the two flats of Acer tegmentosum 'White Tigress'. These were produced by rooted cuttings from a single clone, but the fifty or so plants each displayed different fall color. I huffed on the camera lens, wiped if clean, then photographed the various leaves. We occasionally sell 'White Tigress' as a 6 to 10 foot tree, but these 4" pots would most likely be used as rootstock for our quick-to-sell-out Acer conspicuum 'Phoenix'.

Well, there were dozens more fall-colored plants…or hundreds really, that impressed me this year. But now it's mid-December; the gardens still delight, just in a different way. So goodbye Acer griseum, Ginkgo biloba 'Tschi tschi' and Metasequoia glyptostroboides 'Matthaei Broom', we'll see you next year. Next week we'll explore the winter garden, and the Flora Wonder Arboretum is well-equipped to please any plantsman in the dead of winter.

Posted by Talon Buchholz at 4:20 PM