The Northwest (USA) was abuzz this past week with the flowering of Amorphophallus titanum, the "Titan Arum," in nearby Vancouver, Washington. The event occurred at the Washington State University campus and thanks to news stations and social media it drew thousands of visitors. The Sumatran flower is the largest unbranched inflorescence in the world, and there was no way that I was going to miss it.

To avoid the crowd I abandoned the nursery to its own devices and headed early to Vancouver where I picked up my Grandfather Gerald, as I knew he would also want to witness it. The flower only lasts for 24-48 hours before collapsing, and as you read this it has probably turned to mush. There weren't many people around at the early hour, but the drawback was that the spathe was not fully open, and also that it's "rotting corpse" smell was not evident, when I actually looked forward to getting a whiff. 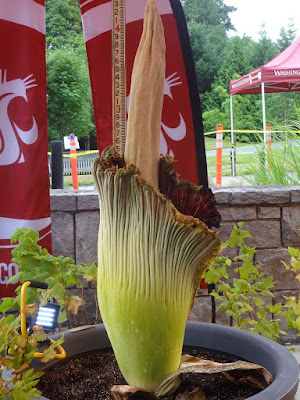 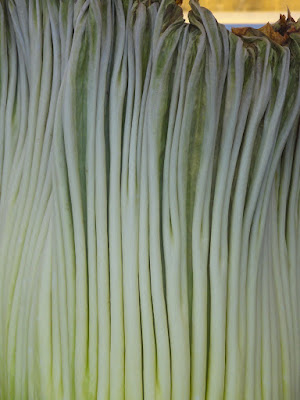 The Amorphophallus name is from Greek amorphos meaning "without form, misshapen" and phallos for "phallus," and that for obvious reason. The creature is native to Sumatra and western Java where it grows in rainforest clearings on limestone hills. The natives call it bunga bangkai where bunga means "flower" and bangkai means "corpse" or "cadaver." It reeks  to attract carrion-eating beetles and flesh flies that accomplish pollination. When in flower the tip of the spadix heats up to human body temperature, while the spathe's – the petal-looking part – color of burgundy-red adds to the illusion of a piece of meat.

Both the male and female flowers grow in the same inflorescence, with the female opening first and then followed by the male flowers a day or two later, nature's trick to keep from self-pollination.

Amorphophallus was first scientifically described in 1878 by Italian botanist Odoardo Beccari (whose first name sounds a little fishy). It first flowered in cultivation at RBG Kew, London, in 1889. It is in the Araceae family, as is Calla palustris and Zantedeschia aethiopica which are commonly known as "calla lily."

The British naturalist David Attenborough is considered the father of the modern nature documentary. While narrating the BBC series The Private Life of Plants, he avoided using the scientific name of Amorphophallus as he thought it was too "improper" to say on TV. What a dick.
Posted by Talon Buchholz at 2:24 PM