Sorry, again a Flora Wonder rerun because of our hectic shipping, and Seth's brain is already fully engaged with no time to produce a new blog. Five years ago, in early May, I was goofing off in southern California and experienced the Riverside Treasures.


I jolted awake at 3 AM, a most groggy hour, and the stabbing ping ping ping of the alarm pissed me thoroughly. What the what?, I wondered...until I sharpened enough to remember that I was booked on an early flight from PDX (Portland) to Los Angeles, and I needed to pick up my travel-companion, Plantsman Hatch, also known as my "Grandfather." Our purpose was to visit botanic gardens and art museums; and if possible, to snoop around garden centers and try to determine why they weren't buying from me.

From our flight we quickly disembarked, then secured a white Dodge Avenger...and sped to our first destination, the University of California @ Riverside Arboretum. I drove the car while Hatch navigated, a strategy that usually works, but this time grandfather faltered and we found ourselves going in circles. Eventually we entered the heart of the campus and Hatch groaned in dismay. I rather enjoyed our predicament, as the coeds were on display, and whether Black, Asian, Latina or Blondes, they all looked fantastic in their SoCal attire. Who needed to hurry to the Arboretum to see plant specimens when we were in the thick of corporal treasures?

We eventually found our way to the Arboretum, which proved to be a second-tier collection with obvious budget constraints; but even institutions such as this can also be filled with spectacular floral encounters, as you will see. To be a prosperous plant here is more of a struggle than in Oregon, unless you're a rose or cactus or Eucalyptus. For my product line the climate is too hot, the soil PH is highly horrible and there's never enough water. The retail nurseries in LA feature a lot of gaudy annuals, water-wise succulents and xerophytic shrubs, but they hardly ever want to venture into my world of maples, conifers and "everything else," which could do well if the gardener is experienced and knowledgeable. I learned last fall that Japanese maples are quite the rage in Dallas, Texas, and there is a far more brutal environment than here in Los Angeles.

The native range of Acer macrophyllum extends to nearly the length of California, but they look different than Oregon's. First, the leaves are only half the size, and as you can see from the photo above, the seeds are red and the nutlets are more hairy. But of course their stature is reduced in rocky dry soil. There was a Calocedrus decurrens in the garden as well, and while its trunk was attractive, the foliage looked dull and it clearly was not thriving.

I had the good fortune to have known Dick van Hoey Smith, the late owner of the Arboretum Trompenburg in Rotterdam, perhaps my favorite garden in all of Europe. He treated me with great respect, even when I was young and wet behind the plant ears. His interest in, and encouragement of me, helped to validate my career and what I was all about with plants. At Trompenburg he would tell the complete story about the entire collection and each and every tree within. A day with him was pleasantly exhausting, and I probably should have secretly carried a tape recorder. After one particularly long day with the "woodies," he led me into another fantastic world, into his cactus collection. Previously unknown to me, Dick harbored a world-class cactus collection, for he was an expert in that too! I use this revelation as preface to the reality that I'm only half a plantsman, or less, compared to van Hoey Smith. Likewise, when I visit a SoCal arboretum I'm really just a dumb visitor. UC Riverside was essentially a prelude to all of the gardens which we visited, where I was very far out of my element.


Take the Aloe genus, for example. Most of the world's species are not hardy in Oregon, though a few are, but that's why I came to California: to see what cannot be seen in Oregon. South Africa's Aloe bainesii was a large wild-looking tree, but I loved the trunk, and as my regular readers know, I am definitely a "trunk man," no matter the plant family. Aloe bainesii is known as the "Tree Aloe," and also known scientifically as Aloe barberae. The latter name is perhaps more appropriate, as its name takes precedence according to the International Code of Botanical Nomenclature -- oooh, aaah – and honors Mary Elizabeth Barber, a collector who first sent plants to England's Kew Gardens in 1874. About the same time Thomas Baines also sent a plant to Kew. I encourage you to google Baines, who appears as a Neanderthal with a most prodigious beard. But he was a traveler and explorer who loved African wildlife and skillfully painted the plants, animals and scenery. Baines lived a storied life, but alas the intrepid explorer died of dysentery in 1875, at the relatively young age of 53. 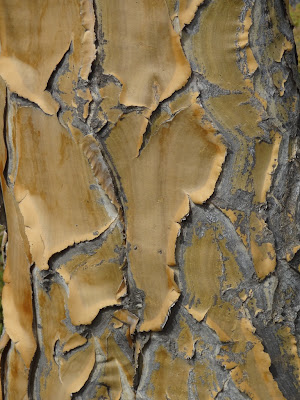 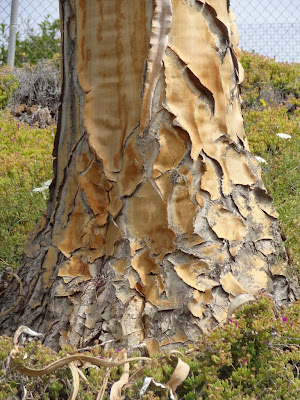 Aloe dichotoma had an even more impressive trunk, for the exfoliating cinnamon-colored bark exhibited a honey glow. This Aloe is known as the "Quiver tree," and the name is due to the native San Tribe (Bushmen) who used the hollowed-out branches as quivers for their poisonous arrows. It too is native to South Africa, where it is unfortunately rare and endangered. The species name, dichotoma, refers to its forked branches, as the name is Latin for "forked." Bright yellow flowers emerge in mid-winter, but we were far too late for that. 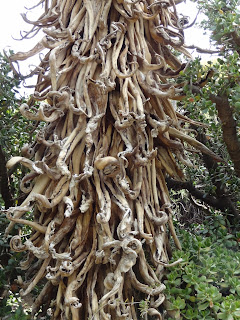 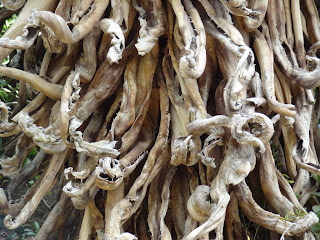 Other Aloes included marlothii, pluridens, and speciosa. Aloe marlothii is the "Mountain Aloe," and varies throughout southern Africa to include the intermediate form, Aloe spectabilis. It results in natural hybrids with at least thirty other species. Egads, how do you keep botanical track of it then? Aloe speciosa displays blue-green leaves with pinkish-red leaf margins. The species name speciosa means "showy" in Latin, and refers to the impressive deep-red flower buds, with green and white stripes. Aloe pluridens is the "French Aloe," and it features reddish-green recurved leaves with sap smelling of rhubarb. The species name comes from Latin pluri, meaning "many," and dens, meaning "teeth," due to the toothed leaf margins. Uh-oh, I think I could really get drawn into this South African floral world. 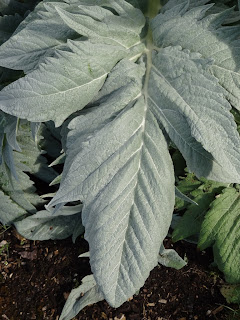 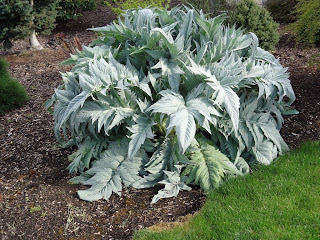 What is the difference between an Echinocactus and an Echinocereus? Echino is ultimately derived from Greek echinos, referring to "hedgehog" or "sea urchin," and has come to mean "prickly" or "spiny" on plants. Cactus is derived from Greek kaktos, and was used by Linnaeus to lump succulent plants with spines. The Greek kaktos was originally used to describe the "cardoon" plant, Cynara cardunculus, also known as the "artichoke thistle" because of its spiny leaves. Echinocereus is a plant name for a spiny succulent with an elongated body. None of this is important if you're like me, just a casual observer of this large group, but many people can instantly recognize and appreciate Echinocactus grusonii, the "Golden Barrel Cactus," and some men refer to it as the "mother-in-law's cushion." Ha.

Ferocactus are usually barrel-shaped as well, with the prefix fero coming from Italian for "ferocious" or fierce, due to the spines. The species pilosus is known as the "Mexican Fire Barrel" for obvious reason. Ferocactus gracilis also displays red spines, and the subspecies coloratus does not mean that it is native to Colorado state (but Baja, California rather), for coloratus is Latin for "colored." As you can see, there is some order to botanical nomenclature, but I really wished I had a guidebook or an expert with me at the time of my visit. 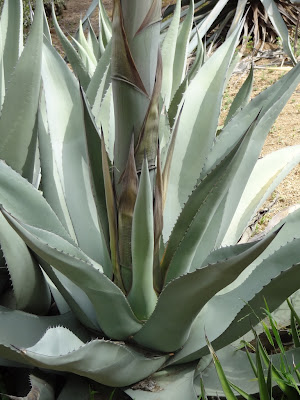 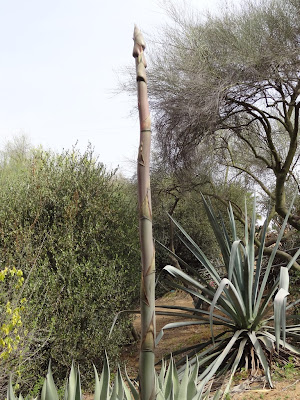 Just about every botanic collection in California will have one or more specimens of Agave parryi, the "Blue Mescal Agave." And why not? – the plant is compact, requires little maintenance, and doesn't need much water. The leaves are bright blue, about 12" long and end in a sharp black barb. It's difficult to stare at it in the Californian sunshine however, as one can become mesmerized with the foliage patterns, or at least I do. Agave lechuguilla was also present, and it comes from the Chihuahuan Desert. Its leaves are longer and more narrow than parryi, and quite pointed to boot, and it is amusingly called a "shin dagger." I've never tasted the juice of lechuguilla, but it is supposedly rich in minerals and is used in Mexico as a sports drink. 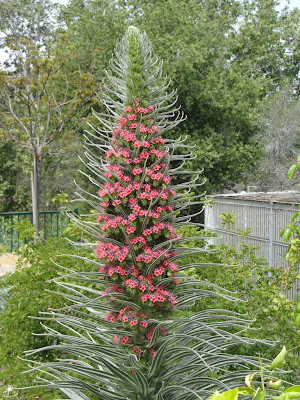 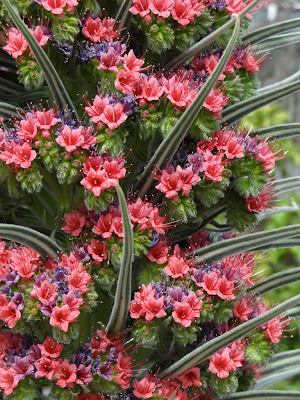 
Visitors to UCR can't miss a "wow" plant when in bloom, Echium wildprettii, a Canary Island biennial whose flower spike can shoot up to ten feet. This is commonly called the "Tower of Jewels" for its pinkish-orange blossoms which were ahum with bees. Can you find Waldo the Bee in the photo above? 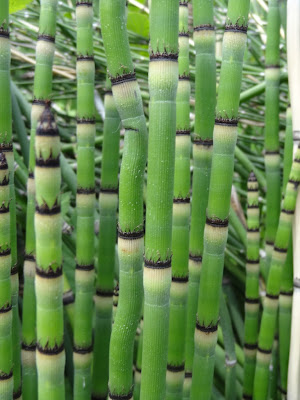 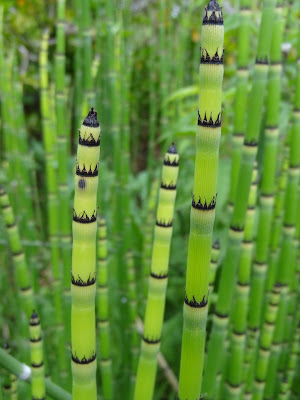 Near to the Echium was Equisetum hyemale, known in South Africa as "Snake Grass." In America we call this genus "horsetail" while in England it is known as mare's tail. It thrives in swamps and stream banks in the wild, and I'm sure it would spread enthusiastically at Buchholz Nursery should I lose my senses and plant one. It is also known as the "souring rush," and is used in Japan as a polishing material, like fine sandpaper. Not only can you clean pots and pans with it, but the Japanese shape the reeds of clarinets and saxophones with this horsetail. The botanic name is derived from Latin equus for "horse" and Latin seta for "bristle."

There was an enormous patch of Euphorbia resinifera growing on a bank. This "Resin Spurge" is native to Morocco and grows on the slopes of the Atlas Mountains. The succulent stems stand erect, and the specimen looked to me like a cactus, complete with short, but vicious, spines. Without the plant label I wouldn't have had a clue that it was a Euphorbia. By the way, the genus name refers to Euphorbus, the physician of King Juba II of Numidia, and indeed, the plant is one of the oldest documented medicinals, and the extracted latex is called Euphorbium.

The morning sun played well off of the leaves of the South African Kalanchoe thyrsiflora, a species commonly called "Paddle Plant" or "Desert Cabbage." The species name is from French thyrsus, and refers to the panicle-like flower cluster. Even kids can easily grow Kalanchoe – I used to – on the window sill in pots, but whatever happened to mine anyway? 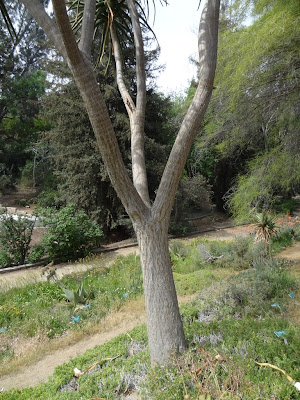 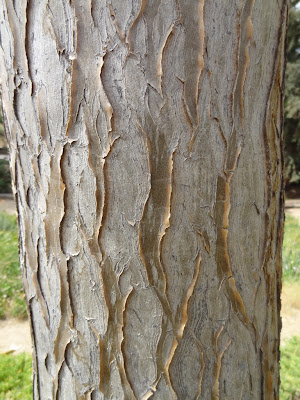 I photographed a wild-looking tree with an attractive trunk. The nearby label said Malephora luteola, and I was anxious to return home to find out more about the tree. I discovered, however, that the label was placed at the base to identify the creeping succulent underneath, so I never learned the tree's identity. Help, anyone? That situation gives me pause, and I wonder what other boners I may have committed in this blog. I've made mistakes before with maples and conifers, the plants of my career. As usual, I always stand to be corrected, because before we're out of California, I will have milked the trip into a few more blogs.

I'll finish with photos only of some more plants that I encountered, and hopefully their identities will be correct. The good news is that upon exiting, we were temporarily lost again on campus, but fortunately the coeds were easy to identify, and all flowering parts were quite obvious. 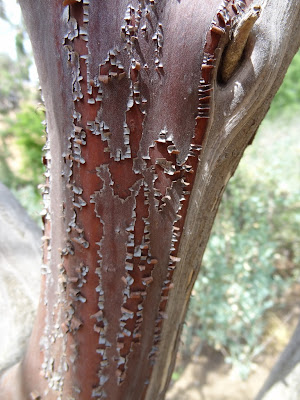 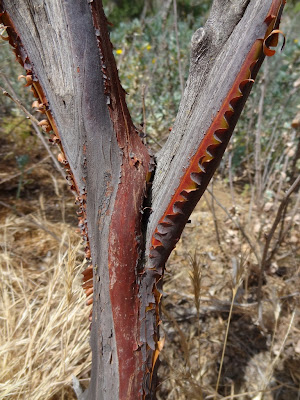 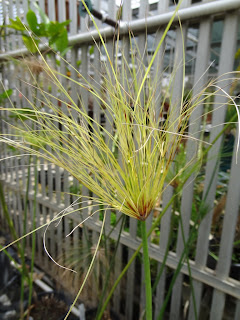 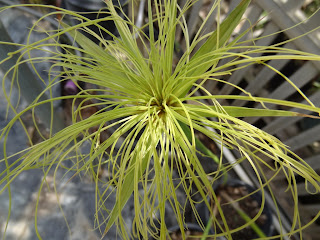 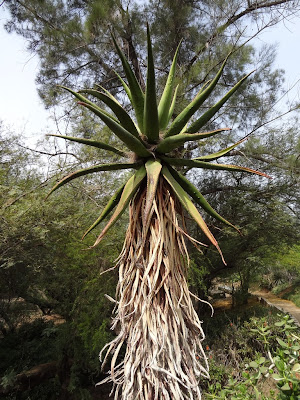 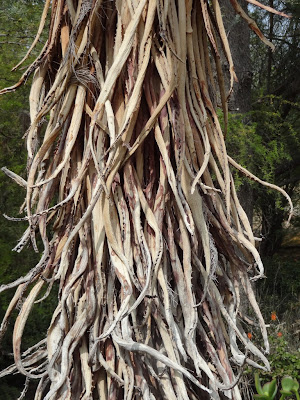 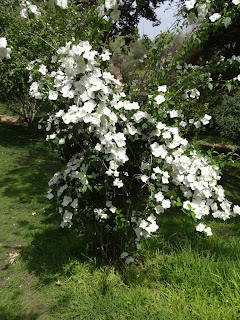 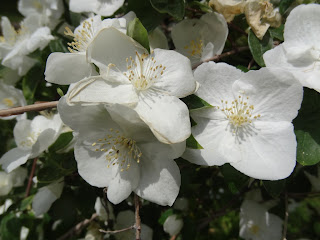 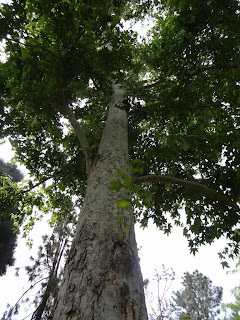 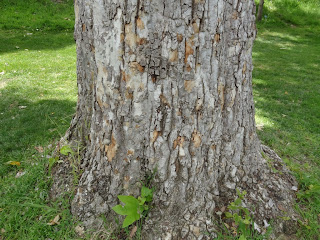 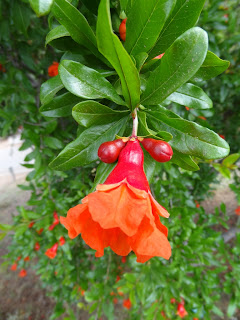 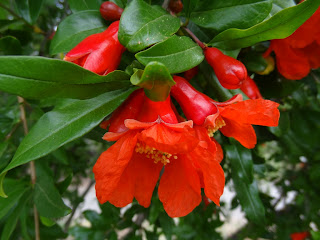 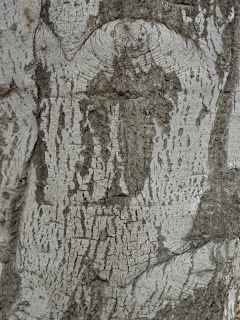 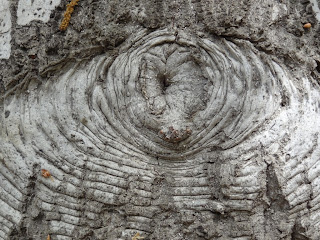 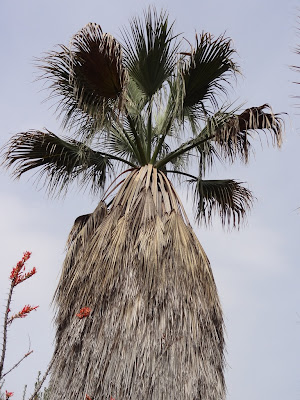 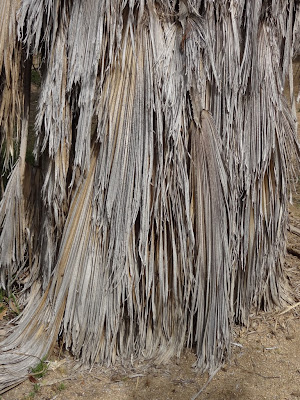 Washingtonia filifera
Posted by Talon Buchholz at 8:17 AM