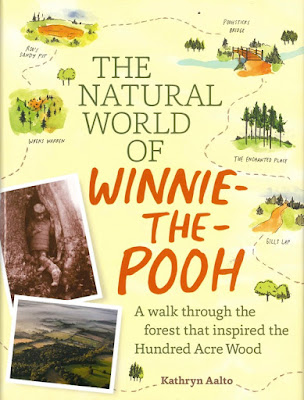 I have read a couple of English nature books recently and I thoroughly enjoyed both of them. The first was The Natural World of Winnie-the-Pooh by Kathryn Aalto, “a walk through the forest that inspired the Hundred Acre Wood.” I somehow skipped Winnie-the-Pooh as a child; I thought the Honey-Bear was kind of boring. When I was about twenty a sweet girlfriend referred to me as Christopher Robin, which I took to mean that I was an earnest and good boy, but that I was also kind of simple. Then a few years ago the animated Pooh film arrived in theaters which was highly regarded. I agreed: it was cute and clever and I enjoyed it as much as the kids.

My eleven-year-old is a solid Pooh fan with Pooh slippers, a Pooh pillow and a few Pooh stuffed animals, and all of that is fine except that I cringe that the materials were processed in China. Anyway the book was her birthday present, and while some of the natural history of the Hundred Acre Woods – which is actually the 6,000 acres of Ashdown Forest in southeast England – might be above her, I have found that it is better with children to aim high rather than low. 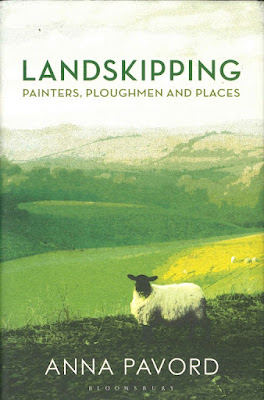 I devoured the second book, Landskipping by Anna Pavord, with giddy excitement as I am familiar with her other works such as The Tulip and The Naming of Names. She celebrates the British landscape and the book is subtitled Painters, Ploughmen and Places. To those of us who have visited Britain – somewhat wild with Wales on the west and Anglia on the east – and then the rugged north of Scotland, we are finally soothed with plowed fields, stone walls and luscious sheep-cropped meadows in the south and central of England. Pavord loves the landscape fashioned by the “hand of man”* as much as any wild place, in fact while climbing in the Scottish Highlands she feels “terrified, pulverized by the force of the mountains, ecstatic,” and realizes that “living on a high like that can't be sustained.”

*Pavord writes about the English painter Samuel Palmer (1805-1881), whom I had never heard of before. I investigated further – since the internet can be a fabulous tool – and read a quote from biographer Rachel Campbell-Johnston that Palmer was “part of a group that gathered around William Blake,” and that he painted with “mad splendour which makes you think of Van Gogh.” At other times Campbell-Johnston imagines Palmer “sketching out a poetic landscape where the peasants were plump and happy, the orchards full of apples and the sheep obligingly biblical.”

While Pavord loves the “hand of man” on the landscape she classifies golf courses as “not useful.” She says: “There is nothing life-enhancing for a plant or animal on the average green or fairway. As an environment, a golf course is a fascist state. And a thirsty one.” Pavord is a wonderful wit and I'd love to spend a day with her, and wouldn't it be wonderful to hike together up her Sugar Loaf Mountain on the Welsh-English border where she grew up. It takes two hours to climb to the top, a route she had taken with her mother “hundreds of times,” and the last climb "with" her mother is movingly described in the last paragraph of Landskipping.*

*The word landskip is no longer in general use. It is now considered a “British regionalism,” and first appeared from Dutch “landschap” for a “view or prospect of natural inland scenery, such as can be taken in at a glance from one point of view.” (OED) 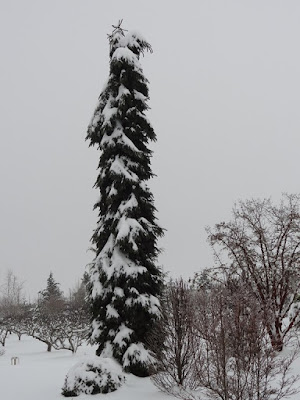 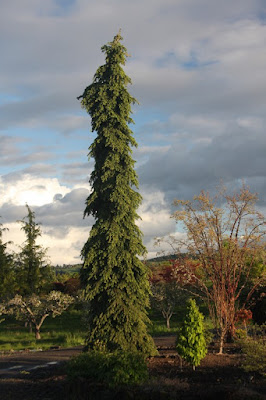 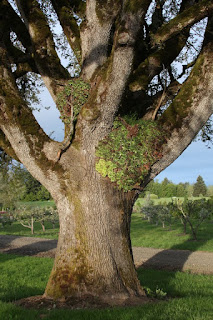 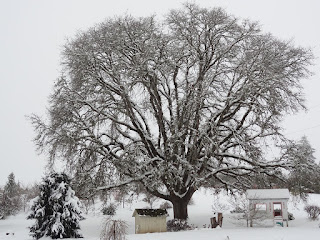 These two books prompted me to look at my Flora Farm, perhaps through the eyes of my children who have spent their entire life living on a country property filled with their old man's trees. Talk about a fascist state! – with bushes lined up in rows and metal labels pronouncing botanic names in Latin. When daughter Harumi was two – almost three – she would walk around the gardens with her mother and point to the labels and ask, “what's that?” “what's that?” Mom explained that the labels were the trees' names, and soon Harumi could spout “Picea glauca Pendula” when I pointed in the direction of said tree, or “Kurkus garrana” when I pointed at our giant oak. Naturally I was proud but my older children were certain that I had brainwashed her.

Flora Farm is sixty acres and consists of the Upper Gardens, the West Hills, and the wild lands down by the Tualatin River. The lower property floods in winter and along the water edges the blue herons and the white egrets mate, in the water the ducks dumbly quack and the geese loudly squawk. Flocks are always coming and going. Hummingbirds begin darting around the Mahonias in November and don't finish until February, and when leaves fall from the maple trees we can see their tidy little nests, for they prefer to zoom in and out of maple foliage rather than prickly Mahonia.

What it must be like for a child to grow up in the country; I never had such good fortune growing up in the suburbs. The children especially love to kick the can and play hide and seek until dusk turns to dark, especially if an ambitious adult like my son or their mother Haruko joins in the fun. They don't care if the fir they hide behind is a common species from Oregon, or the highest altitude Abies squamata from China (16,000'). They are careful however – more so than their friends – and are aware of the importance of labels and irrigation drip lines.

With plants a nurseryman can color his scape, choosing to plant blue conifers next to a row of yellow trees for example. I am free to plant whatever I want, but I realize that I am only borrowing time.

I bought the property because I liked its feel. On the east side the land drops gently for a quarter mile from the public road down to the river, and on the west the hills extend all the way to sunset. Two huge Pseudotsuga menziesii were already growing before the White Man robbed the ground from the natives, and my beloved Oregon oak was already large when George Washington was president. Nothing was virgin about the land however - it had been cleared and managed by natives for years. In more recent times strawberries was a popular crop (in the 1950's and 60's), but that petered out when cream-puff legislators decided that school kids like me were being abused with the hard labor. Ha to that! The strawberry patch, where you were rewarded solely by your effort, was a better life classroom than anything within four walls.


The land during my ownership has produced wheat, clover, broccoli and corn before I stuck ornamentals into the dirt, and the local farmer used my land rent free, because farming is not profitable enough now if the vegetable grower has to farm and pay rent. The neighborhood lands are filling up with vineyards; Oregon is world-famous for its pinot noir and I wonder if one day my trees will be cleared for grapes.

I agree with Ms. Pavord – I really wish I could call her "Anna" but she is ten years my senior – that the best time to view a landscape is in the morning or the evening, when the light travels sideways. The Japanese have the term shakkei which refers to “borrowed landscape,” meaning that a garden or landscape can continue and include the hills or clouds beyond. My good neighbor to the east – Grace, the owner of Blooming Nursery – has some large Douglas firs on her property. Who owns them? Certainly not me as I don't possess the deed to their plot. Grace knows about them and is probably happy they exist, but I don't think she appreciates them as much as I do. Between the trees I know where to look for Mt. Hood, and in some respects I feel like I “own” that too. The sky, the trees, the mountain – they're all for me, and looking east: what a great way to begin the morning.
Posted by Talon Buchholz at 1:25 PM