I enjoy receiving feedback from readers of the Flora Wonder Blog, even when they point out that I am wrong. Plantsman Brian Humphrey, formerly employed by England's Hillier Nursery, set me straight on Peter Dummer's wife, since last week's blog contained some errors.

As always we really enjoy your Blogs. Your last was brilliant and fascinating as usual. I thought I ought to put the record straight on Peter Dummer`s marital status however, because although, very sadly Peter is no longer with us he would be embarrassed by the suggestion that he ever replaced Milly, his wife. I am amazed as both Roy Lancaster and John Hillier knew Peter well and must have known the correct story. Lack of sfficiently careful proof reading is the problem I suppose. She sadly died before him and really left him desolate and lonely and he never really recovered from the loss. I knew Peter well as he was my first boss at Hilliers and I had the privilege of working for two years in a grafting team lead by him. As a matter of interest it included Peter Douwsma, the originator of the first Acer x conspicuum (Silver Vein) Alan Postill (just a  youngster then) who raised Daphne bholua Jacqueline Postill and Peter Moore who raised Chiosya Aztec Pearl among others. Peter was undoubtedly an inspiration to them in their efforts to hybridize woody plants. As for me he taught me, as best he could, his superb knifesmanship which I have rarely seen equaled by others.

Hamamelis vernalis 'Sandra' was named after Peter`s daughter. Cotinus Grace was named after his wife but the `powers that be` thought Milly was not suitable so he used her second name Grace as the cultivar name. Perhaps they were right but Milly to me has unbeatable charm. I suppose Grace is pretty good too. Some people have all the luck.

Betula medwediewii is a charming, slow growing Caucasian species, we have a form called Gold Bark here which frankly doesn`t look any different to other good selections. Good golden autumn colour and bark similar to B. alleghaniensis, really almost a large shrub rather than a tree. I will send you some scions if you like. Unlike many in the Betulenta section it seems to be compatible on B. pendula if you use that, or I suspect OK on nigra also.
We look forward to your blogs every week.

I was ok to receive the following comment from an anonymous reader, except I didn't learn anything from it.

You've likely seen a decline with Fothergilla and Clethra as both are finicky with acidic soils and there are a plethra [sic]of cultivars that offer little differentiation. Similar to what you see with the bun like Picea abies and Picea pungens cultivars.

Might be worth noting that burning bush is invasive in many parts of the country.

Good to see H. vernalis shown here. There are several nice cultivars available with excellent fall color, Sandra being one of them.

Some comments, however, are downright nonsensical, boring or crude.

It's true, I never read the ramblings.......and just look at the pretty, probably photoshopped, pictures LOL

Sheesh.........thanx for putting up with us knuckleheads........maybe without all us knucklehead collectors you'd be out of business you know?

Dude, do you ever reply to your fan club?

You sound like a crude judgmental bitch. Have a nice day.

Now, back to some horticulture. First of all, the word is derived from Latin hortus for "garden" and the English agriculture, meaning "on the pattern of agriculture." Agriculture comes from Latin ager or agr for "field," and Latin cultura for "growing" or "cultivation." Grow is of Germanic origin, and was earlier growan in Old English and groeien in Dutch. Growan is related to the English "grass" and "green."

When I used to travel by car from Canada back into the USA, I was always asked my profession at the border. Now I can't wait to say "Retired." Never wanting to lie to a border official, I used to answer "Nurseryman." Then they would require me to come into the building for an hour while they studied me and searched my car for contraband!, like for plants or scionwood. If I travelled with someone else, I'm sure there was a hidden microphone to record us. So one time I switched my profession to "Horticulture," hoping I could dodge the ordeal, but they still required me to come in...as if I was dumb enough to bring plants into America illegally – which I took offense at the notion – but I was always polite and respectful. When they asked what I was doing in Canada, I answered "visiting nurseries and gardens." I guess I didn't look the part of "nursery and garden" kind-of-guy, and I'm sure they were disappointed when they couldn't catch me with hydrangeas or marijuana or something worse. I haven't been to Canada in the past ten years due to the American harassment, while the Canucks were always happy when I used to visit, eh, because I spent my money there. I consider the USA border people to be my employees, but of course they don't see it that way.

But again, back to horticulture with some nursery observations and experiences:

Greenhouse heaters which fail usually do so on the coldest night of the year, and especially occur on the weekends.

If a nursery has drug addicts and criminals for neighbors, as I do, they will continuously steal from you, and the police will never catch them at it...even though we all know who is guilty – namely all of them. They actually steal in two ways: 1) stealing my plants and equipment and 2) stealing from society which hands them welfare checks, food stamps and free medical care. How about drug tests before the handouts?

I once employed a woman who was tasked with spraying weeds in the field. As those who have visited Buchholz Nursery know, we have sod strips between the rows. After half an hour I had a premonition and decided I should go see how she was doing. When I saw from 100 yards away that she was spraying the sod, not the weeds, I screamed "Stop!" She was stunned frozen, then whapped herself on the head when she realized her error. She quit a month later anyway, and the Buchholz Nursery experience forever terminated any horticultural future for her.

I have two irrigation ponds at the nursery, and near to both of them I have small streams that flow into the Tualatin River. I am not allowed to take water directly from the streams, but I am allowed to pump it back from the Tualatin which is a mile away. That's how the government works, to make it as difficult as possible to do business and make a living.

Because of the pond situation, we are occasionally visited by beavers. And beavers eat trees, but they especially prefer the ones that are flagged as sold. One greenhouse contained one-inch-caliper Acer palmatum cultivars, maybe 50 varieties total. At night the beaver would walk past the 'Fireglows', 'Tamuke yamas', 'Ukigumos' etc, and dine exclusively on the 'Orange Dreams'.

I purchased a custom-made galvanized steel trap to catch the beavers, then we would transport them 10 miles away and release them near a different lake. It was a more complicated chore, of course, when the trap caught skunks.

But I found out how clever beavers were when they started chewing on a row of poplars with three-foot diameter trunks. They would never fall a big tree, but would do enough damage so that a future windstorm could complete the task. One windy night a big tree indeed crashed to the ground – Timber! – and it fell onto my trap, smashing it to smithereens. I could imagine an animated beaver hiding in the bushes and laughing at... chuckle-chuckle-Buchholz ... chuckle-chuckle-Buchholz.

A couple of former (I guess) customers still have a credit balance with us, even though they have not ordered any plants in the past five years. What is hoyle here, especially when they received an account statement? Do I generously mail them a check, out of the blue, or do I wait for them to possibly order again? Should I offer to help them micromanage their company? Is anyone still there anyway?

I love women...for the most part. I generally get along with older women and with younger women, but middle-age women – like those whom I have previously employed – are not such an easy demographic. They are more confrontational and defensive, as a whole, but maybe that is my problem, as they would all opine. My wife reminds me that it is not the message that matters, rather it is how I deliver the message. What I remember is that previous female office-working employees would snarl and raise claws when I simply asked if an assignment was complete, or what was their priority for the day, or what they were currently involved with. I resolved the situation by hiring two men who exceedingly out-performed the previous four women. Have I just offended half my readership? By the way, my gray hair is not due to age, but rather to...

Perhaps I should heed the advice of a now-censored blog commentator, "you need to stick to plants please!!!!" I would suggest that he needs to employ only one exclamation mark, or two or three or five, but never four. Bad form.

Next week I promise to stick to plants. A parting shot is our stunning Pinus contorta 'Chief Joseph', dazzling us on gray dreary days. 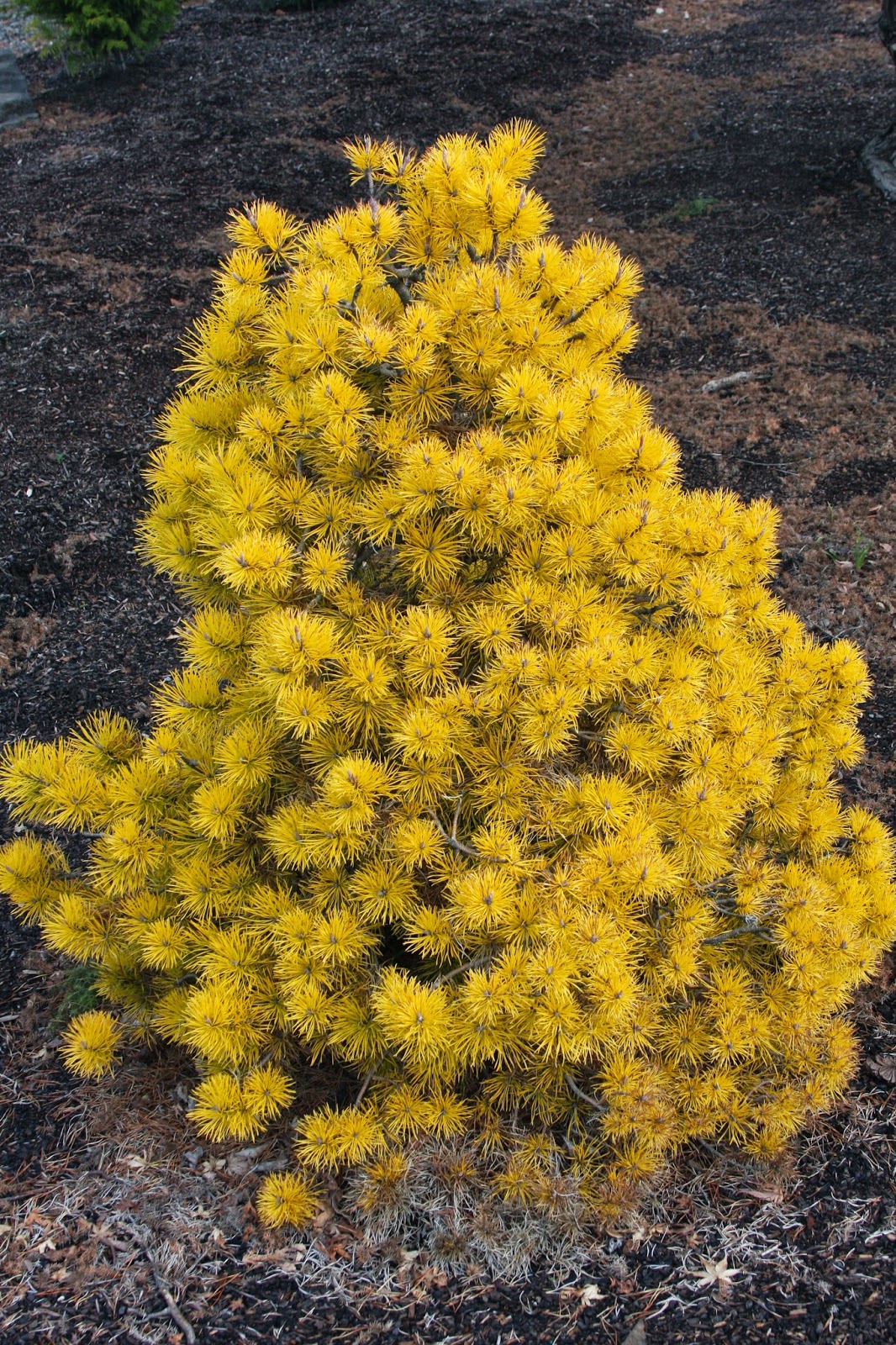 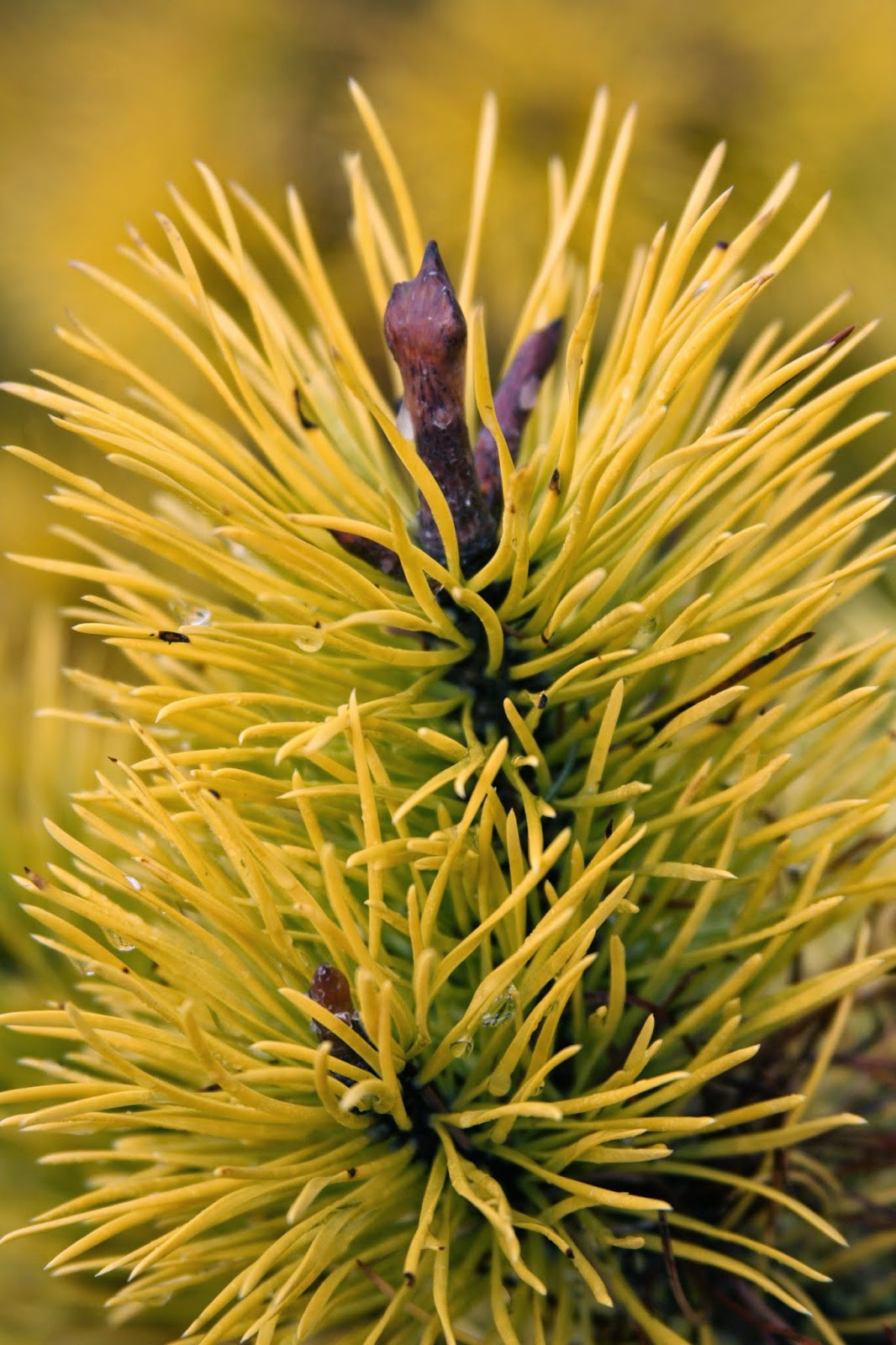