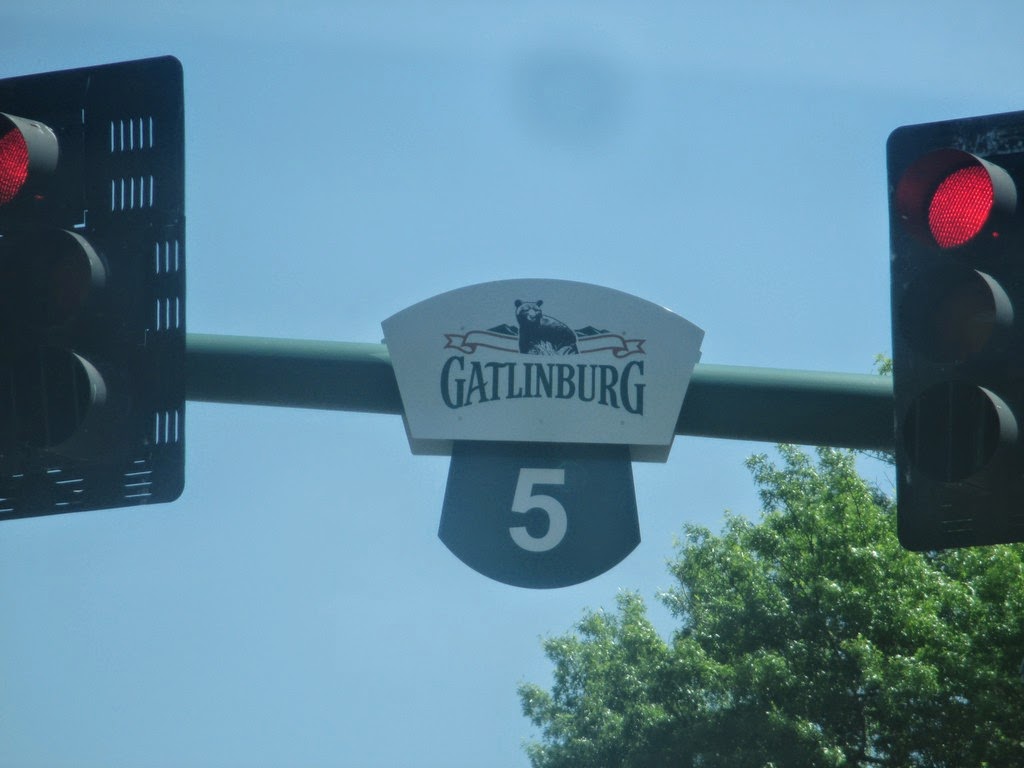 Yes sir, I thought it was about time that I should finally pay Tennessee a visit. The route out of Asheville, North Carolina follows the southern portion of the Blue Ridge Parkway and then cuts across the Smokies National Park. Fortunately the Park was open, unlike last year when President Obama had the audacity to shut it down, completely disregarding the fact that the public owns it, not him. The adventures of Seth and I on the beautiful road will appear in a later blog. Suffice to say that our first impression of Tennessee was grossly surreal, for bordering the beautiful Park was the tourist gauntlet of Gatlinburg, then Pigeon Forge, Tennessee. I won't describe these towns because you wouldn't believe it unless you saw for yourself.

We drove west to Knoxville, then south to Chattanooga at the very bottom of the state. The mountains – well hills to us Oregonians – are beautiful but they trap industrial pollution, so much that at one time Chat' possessed the dirtiest air in America. On the other hand 'nooga is the sole production site for the Altoids breath mints, and also claims to have the fastest internet in the western hemisphere. We didn't take the time to ride the Chattanooga Choo Choo, nor did we visit the International Towing Hall of Fame and Museum, the birthplace of the tow-truck. 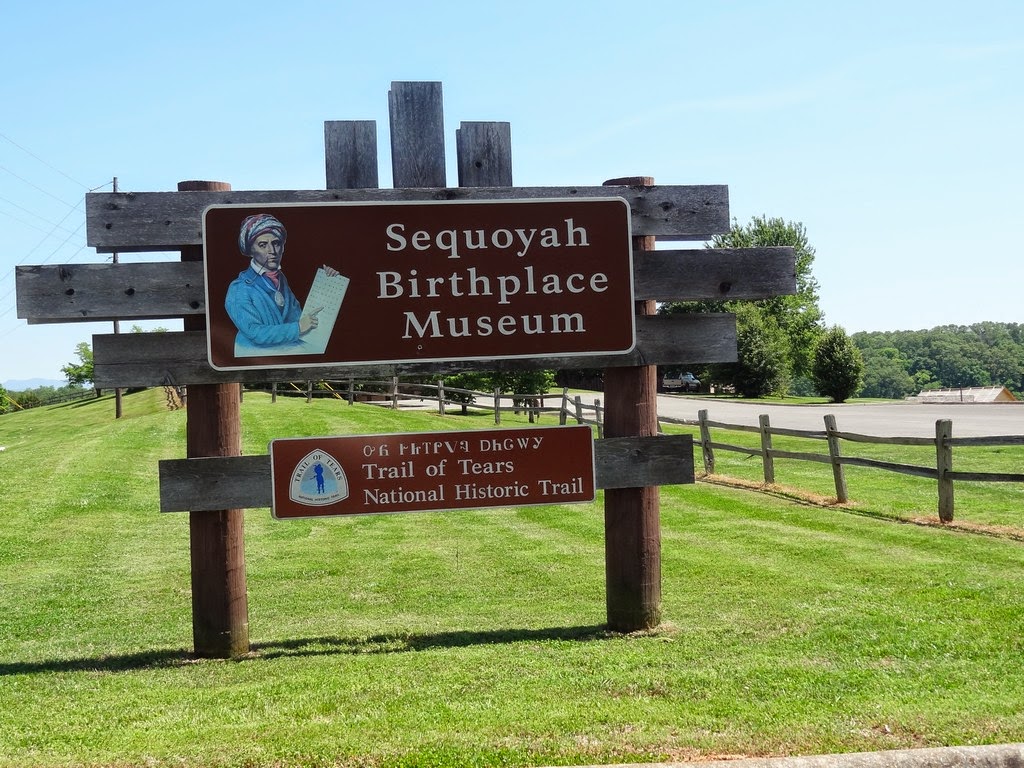 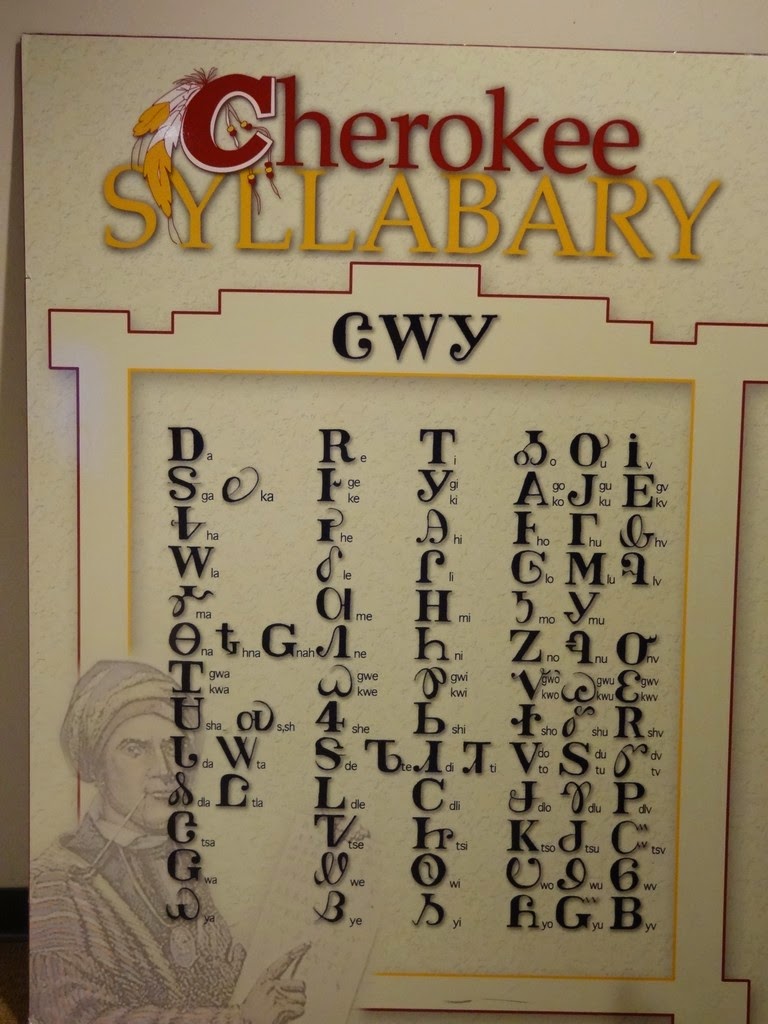 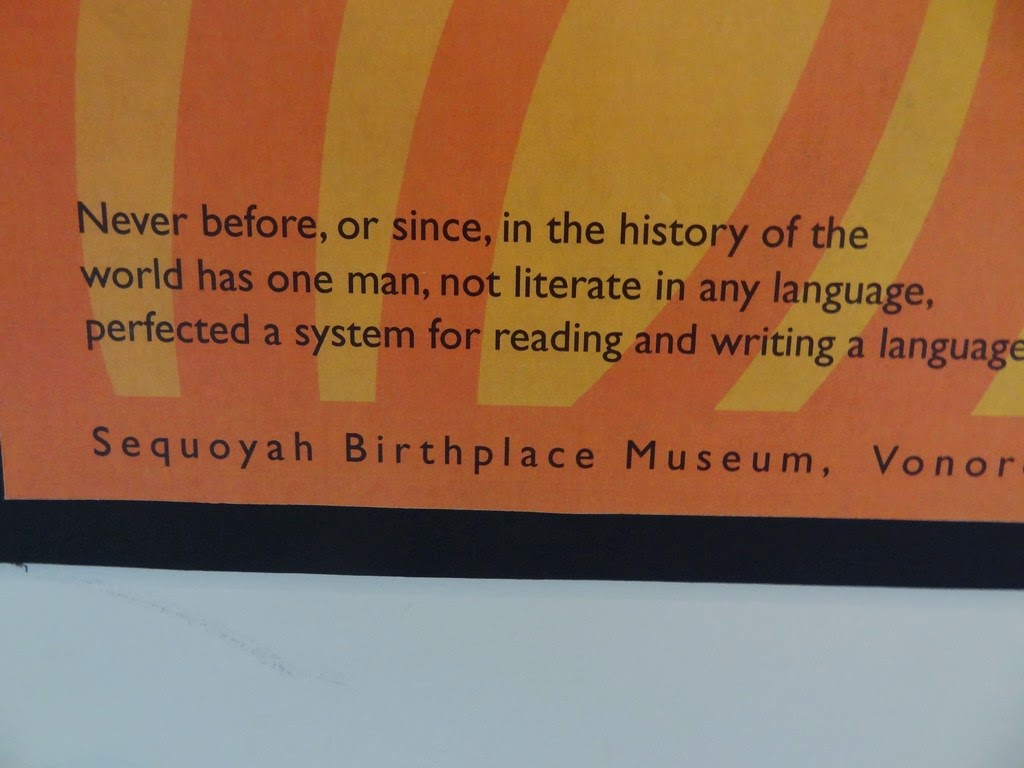 Earlier in the day we did divert onto a side road when I spotted a sign announcing the Sequoyah Museum. That's right, I recalled, that he was a Cherokee chief, and here we were in the heart of the once proud Cherokee Nation. Sequoyah was an accomplished man, as the sign above makes clear, and I'm happy that the giant redwoods were named in his honor rather than for some damn Englishman, even though Sequoyah never saw them. He was born around 1776, his father being a Virginia (white) fur trader and his mother the daughter of a Cherokee chief. He enlisted on the side of the United States with Andrew Jackson in the War of 1812 against the British. At some point he realized that his Cherokee people would be better off if they could read and write like other Americans. After twelve years of working on the syllabary, he introduced it to his tribe, and within a few months thousands of Cherokees became literate. After the very interesting museum, we passed the Sequoyah High School, home of the "Chiefs." 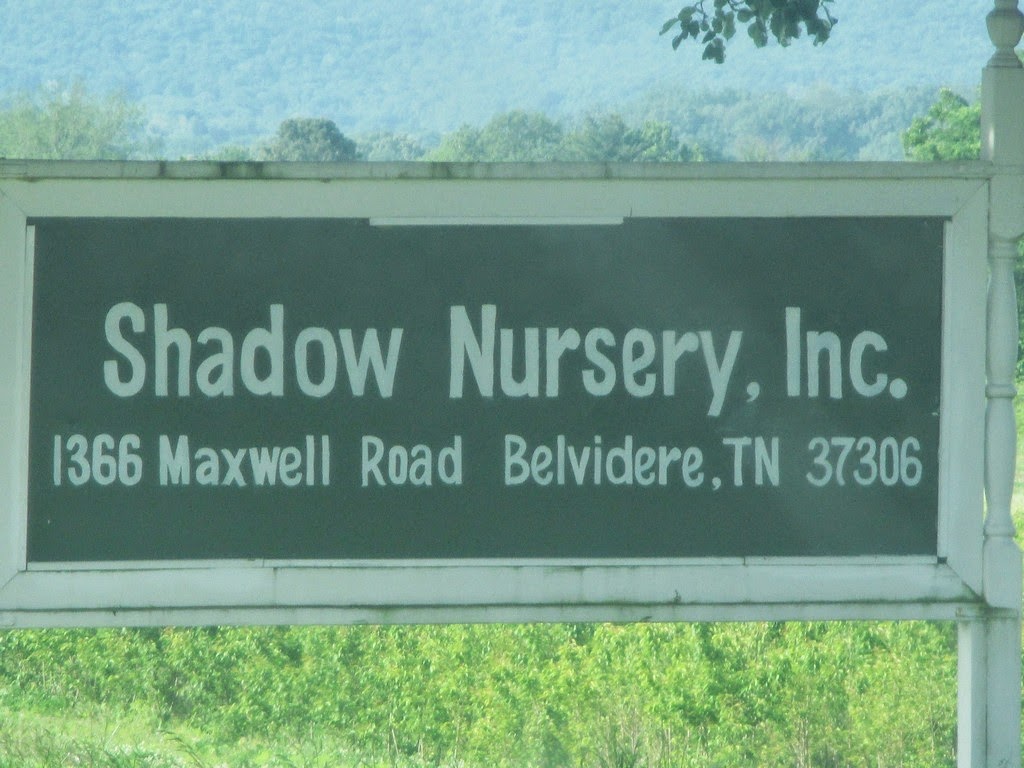 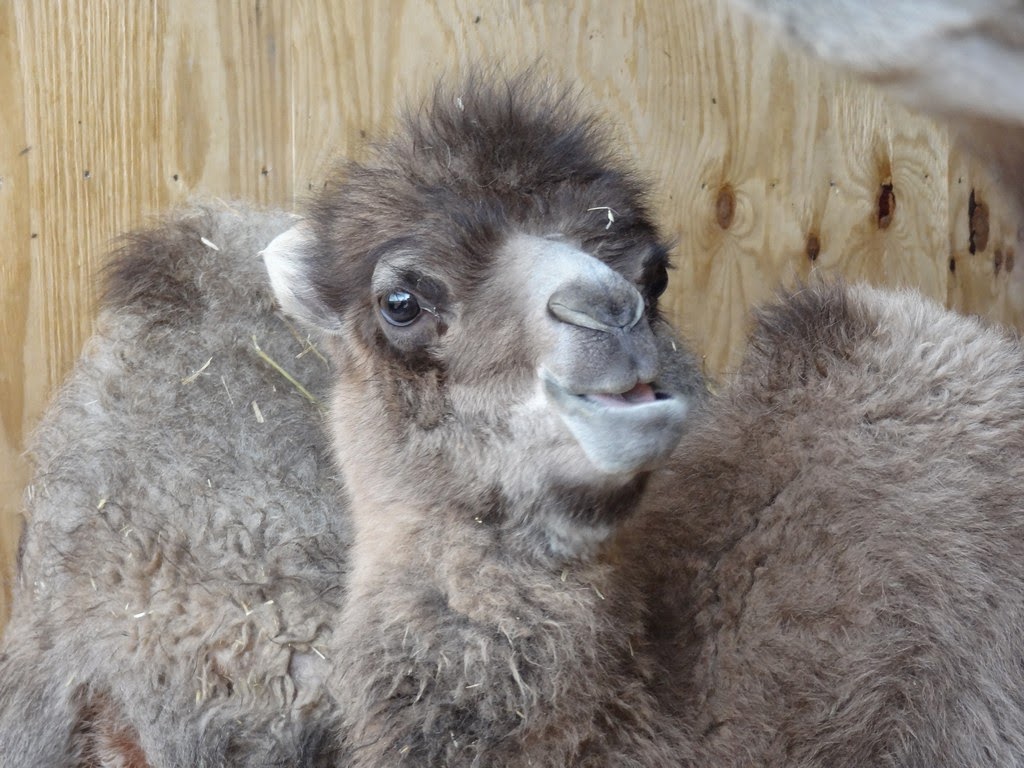 The next morning would be my first-ever visit to the well-known Tennessee plantsman, Don Shadow. He has a number of farms in the area, some containing plants and some containing exotic animals. Don notes that people ask him which he loves the most, the plants or the animals. He answers, “When a camel is giving birth, I love animals the most. But when it's time to graft the maples, then it's the plants.” 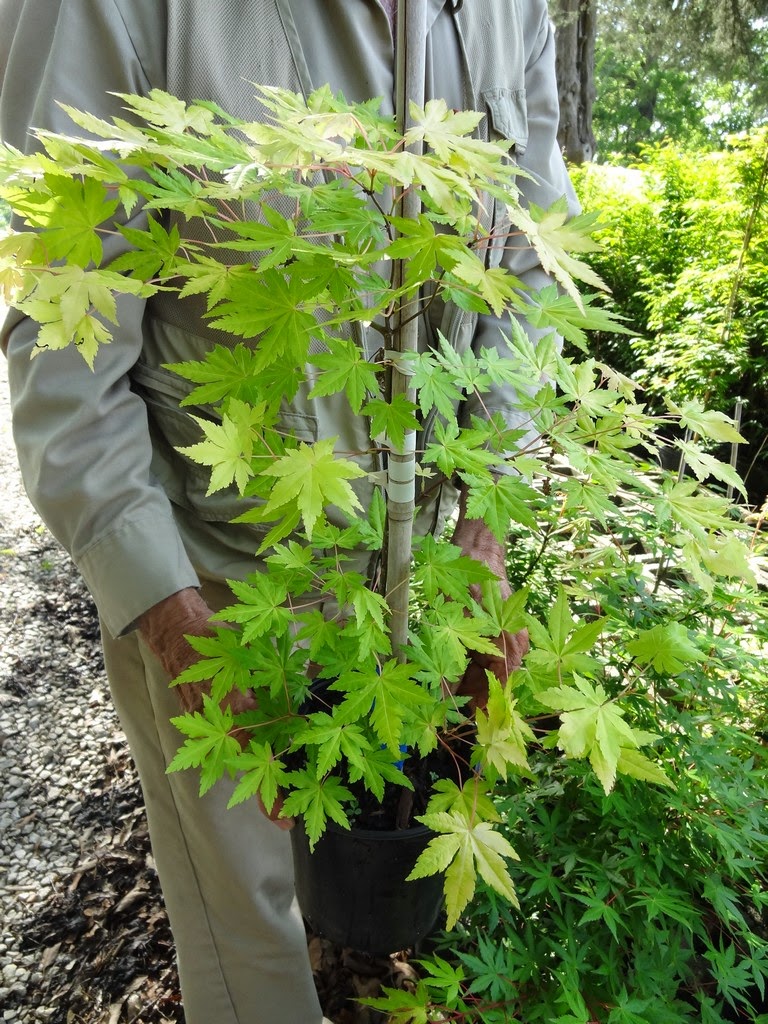 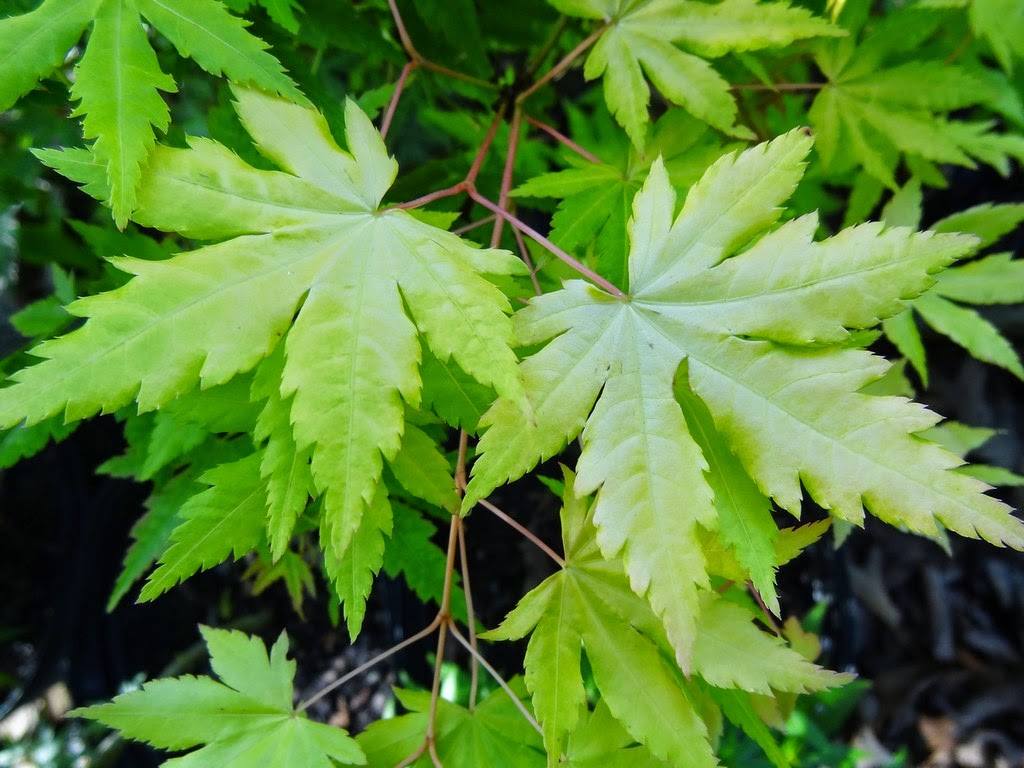 Speaking of maples, Mr. Shadow planted lots of seed from Acer palmatum 'Ryusen'. A portion of them display a weeping form like the parent. He pulled out one that had goldish foliage which he was proud of finding. Little did he know that I have done the same thing, and I am keeping my eye on one with pink new growth in spring and the same weeping habit.

Another new find for me was Shadow's beautiful golden selection of “Trident Maple,” which he named Acer buergerianum 'Michael Steinhardt', after a New Yorker who owns a famous Mt. Cisco garden along with his own herd of animals. Don kindly gave me a start of the tree, and the best part is that it's golden, but can be grown in full sun without burning.

Another impressive cultivar, unknown to me before this trip, was Acer palmatum 'Green Star'. It turns out that it is also grown by the Nichols Boys of East Flat Rock, so if you like what you see then order one from them (at MrMaple.com) but finish this blog first. 'Green Star' was a selection by the late Dick Wolff of Red Maple Nursery in Pennsylvania, and as you can see from the photos above, the new spring foliage is yellow-green, but it will evolve to fresh green by summer. Another maple of interest was a variegated Acer truncatum, but I don't know its origin or how well it would perform in full sun.

Don showed us a couple of firsts: the first propagule of Liquidambar styraciflua 'Slender Silhouette' and the first of Taxodium distichum 'Falling Waters'. Good thing that the “Sweet Gum” was introduced by Don, because for some reason the original tree, growing by a lake, was cut down. The specimen by the house was the largest I have ever seen, but another impressively-sized tree is planted at the University of North Carolina Arboretum in Asheville. Oddly, the very first time I encountered 'Slender Silhouette' was in Belgium at the Arboretum Wespelaar.

Actually, I don't remember if the Taxodium photographed above is the original seedling or if it is the first propagule. In the same yard as these two impressive trees was a wonderful Viburnum plicatum 'Kearns Pink', large specimens of Cornus kousa 'Lustgarten Weeping' and 'Weaver's Weeping' and a fantastic shrub of Baptisia sphaerocarpa 'Screaming Yellow'. The herbaceous perennial is native to the south and central region of the United States and is commonly called “Yellow Wild Indigo.” The indigo name is from Greek indikon, meaning from India. In spite of the 'Screaming Yellow' name, indigo refers to a deep purple-blue color and originates from dye from the Indigofera genus which is native to the Asian tropics. Indigo is also one of the colors of a rainbow, and Sir Isaac Newton first introduced it as a spectral color when he shined light through a prism and created a band of colors on the wall. I suspect that most school children have done the same at one time or another, but hats off to Newton for first doing so. 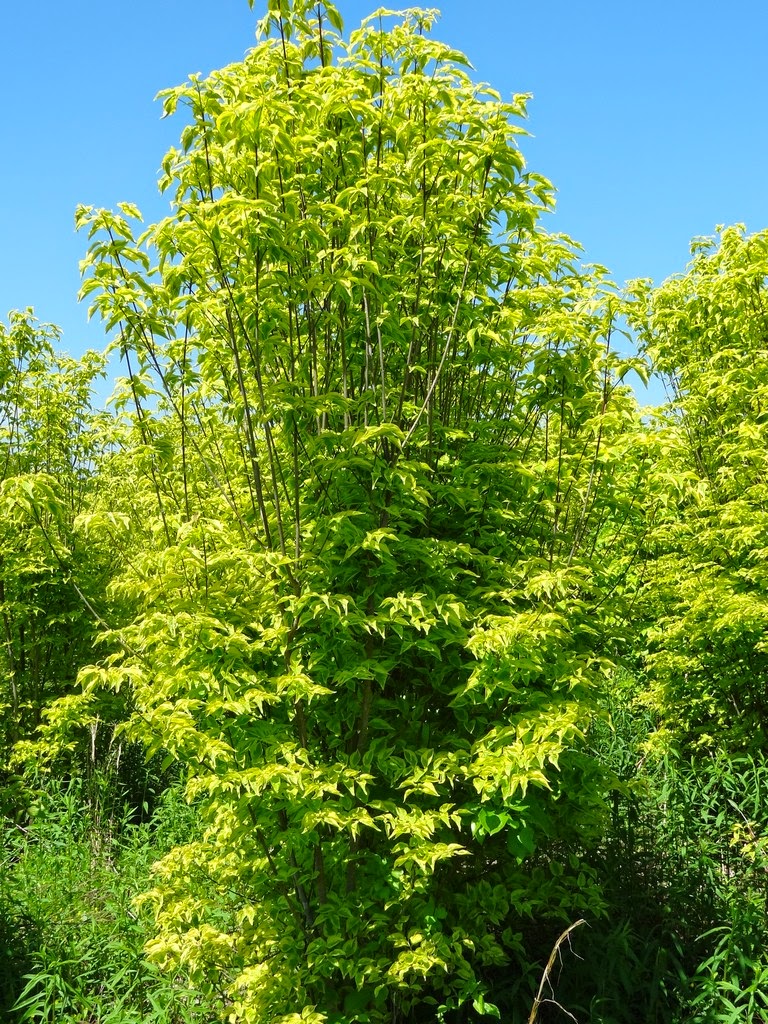 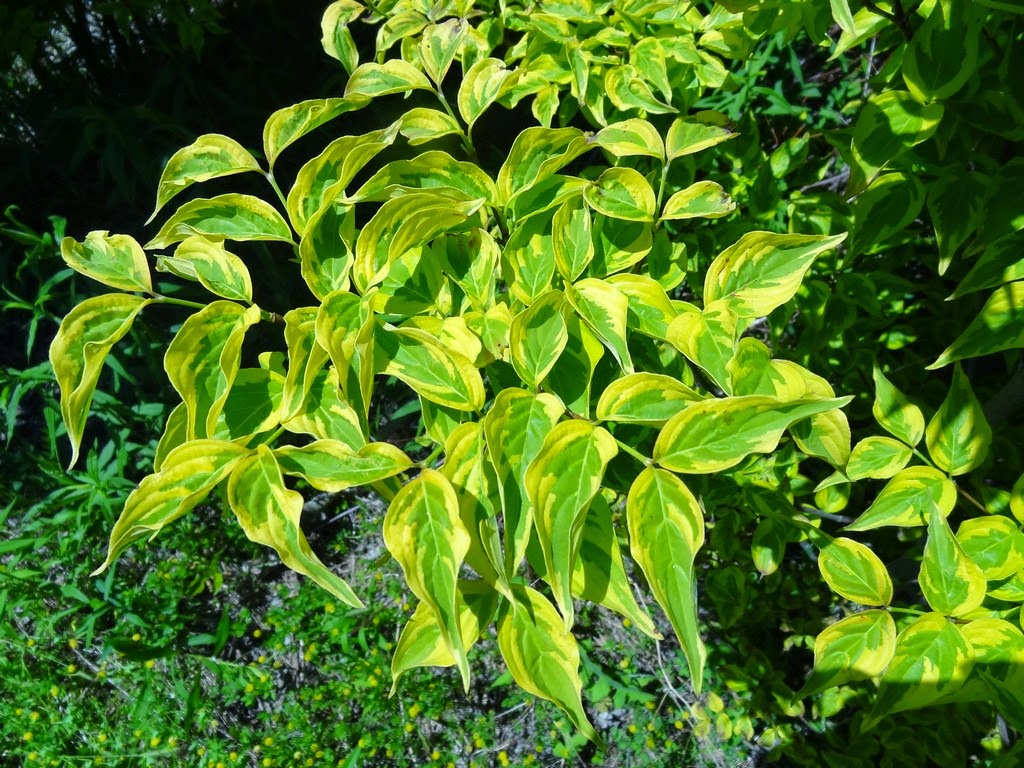 Mr. Shadow showed us some plants with variegation, a characteristic that he is partial to. Polygonatum odoratum 'Byakko' was very pretty, as was P. falcatum 'Variegatum'. There was a variegated Hibiscus as well as a colorful Ilex crenata. Cornus 'Celestial' produced a sport at Shadow Nursery, and he introduced it as 'Celestial Shadow'. Later we saw a golden form of Parthenocissus tricuspidata (Boston Ivy) which was discovered by Peter Del Tredici of the Arnold Arboretum. He named it 'Fenway Park' for Boston's baseball stadium, and it impressively covered a small building.

Don was a gracious host, and he drove us around the nearby town to see interesting trees with interesting stories. We had lunch at a local truck stop, a real Southern meal featuring a triple-sized pork chop smothered in gravy, mashed potatoes and green beans and cornbread ya'll. There was no menu to choose from, just one meal was offered, take it or leave it. Everyone dining that afternoon seemed to know Don, as he is something of a celebrity in the area. 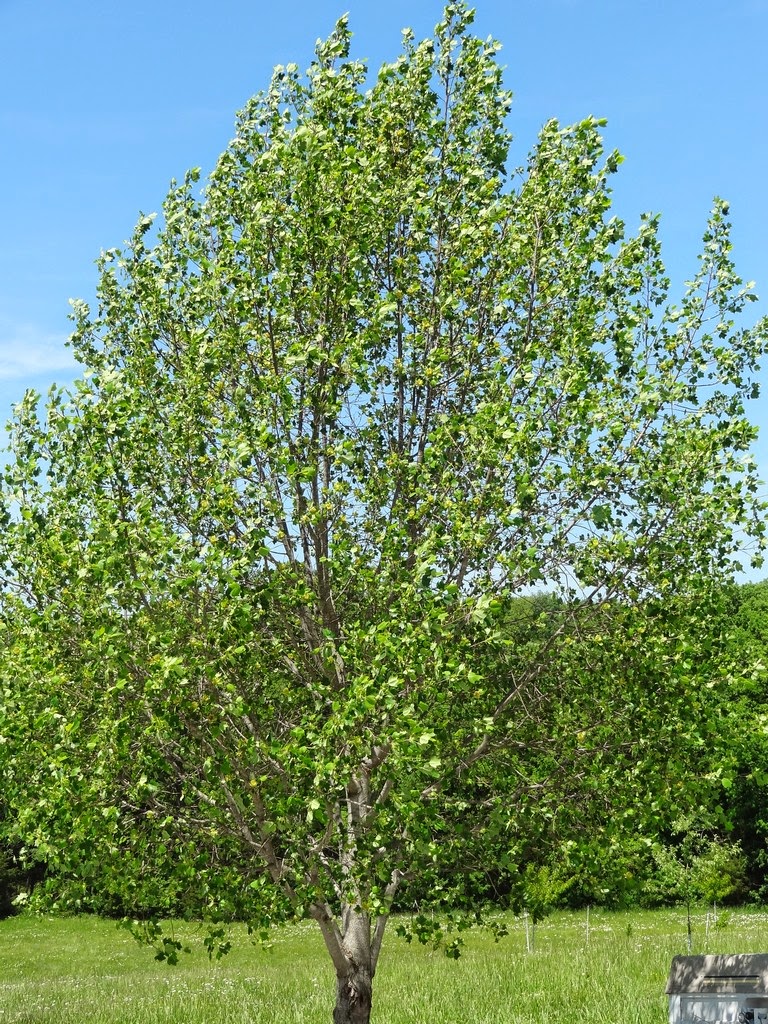 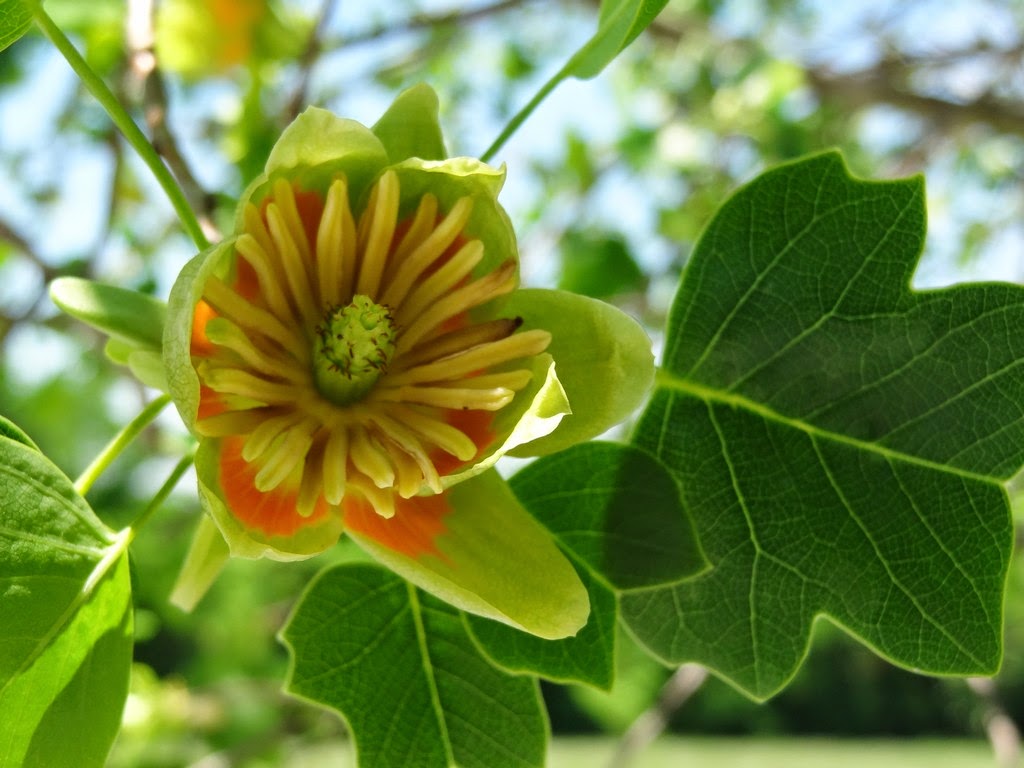 After the experience that is Don Shadow we drove a short distance to a very Hidden Hollow, to the nursery of Harald and son Alex Neubauer. I couldn't take any photos because he sells bareroot lines and the new crop was only a couple of inches up from the ground. But we looked at a photo scrapbook and most of their plants were fairly new introductions, some of which I grow myself. Well, I did take one photo of a smaller, more compact Liriodendron tulipifera, a Hidden Hollow introduction called 'Little Volunteer', a tree I would certainly buy if I could. 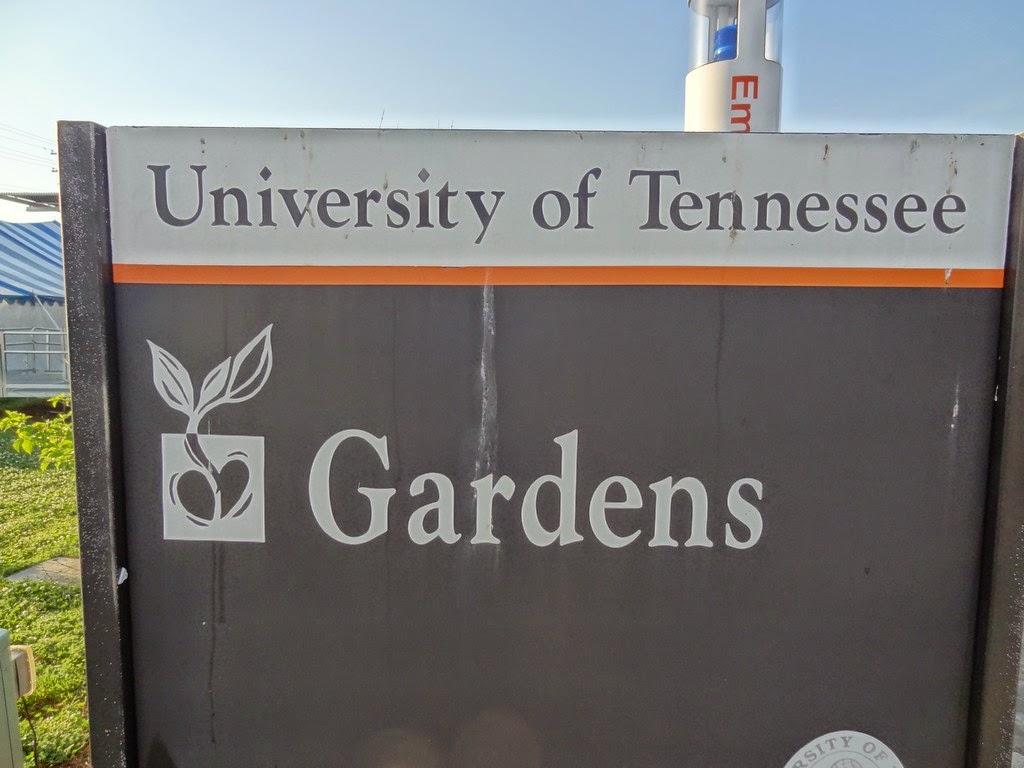 Our final stop in Tennessee was early in the morning at the University of Tennessee Botanic Garden in Knoxville. I was prepared to be unimpressed, judging from their website, but I was quite wrong. The garden was small but well-tended with a number of interesting plants. It is recognized as the official botanical garden of the state, and its mission is to function as an outdoor laboratory to evaluate everything from annuals, shrubs to trees. The climate is more brutal in Tennessee than in Oregon, with extreme summer heat and humidity. The winters are no picnic either, and often a plant has to endure great temperature fluctuations.

One of the first trees to draw my attention was the “Japanese Crapemyrtle,” Lagerstroemia fauriei, the trunk of which glowed with cinnamon and green. I decided last fall in the Raleigh, NC area that I should obtain the fauriei species for my garden, even though I don't really like the crapemyrtle blossom colors. The Lagerstroemia genus was named by Linnaeus to honor the Swedish merchant Magnus von Lagerström who supplied Linnaeus with trees. The Japanese name for the tree is saru suberi which means “monkey slip” due to the smooth bark. A kashikoi saru, or “smart monkey,” would be able to climb the tree I suppose, and it's a name I bestow upon my young children when they do something clever. The species name is for Père Urbain Faurie (1847-1915) who was a French missionary and plant collector. He sent thousands of herbarium specimens to Paris, Kew Gardens and elsewhere, and there are a number of fauriei species names such as Papaver fauriei (an alpine poppy) and Alnus fauriei (Japanese alder).


Near the crapemyrtle was a good-sized specimen of the “Shantung Maple,” Acer truncatum. The species name is from Latin truncatus, referring to the cut-short appearance at  the base of the leaf. The common name is due to the species growing in Shandong Province in northeastern China. Almost one hundred million people now live in the small affluent province, but the city of Qufu was the birthplace of Confucius and  the center of Confucianism a couple thousand years ago. Shandong means shan for “mountain” and dong for “east,” as it lies east of the Taihang Mountains. Besides all of that, Shantung Maple is an easy species to grow and it withstands the climate of inhospitable regions like Texas and Tennessee. I also enjoy its orange-to-red fall color and the attractive bark in winter. 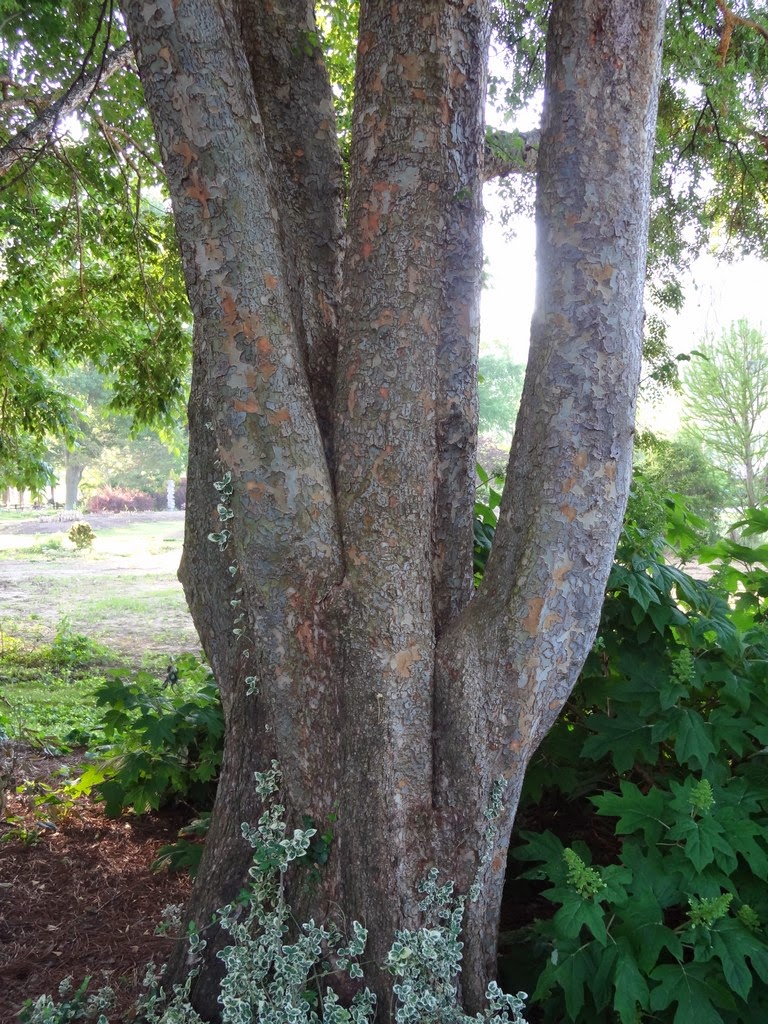 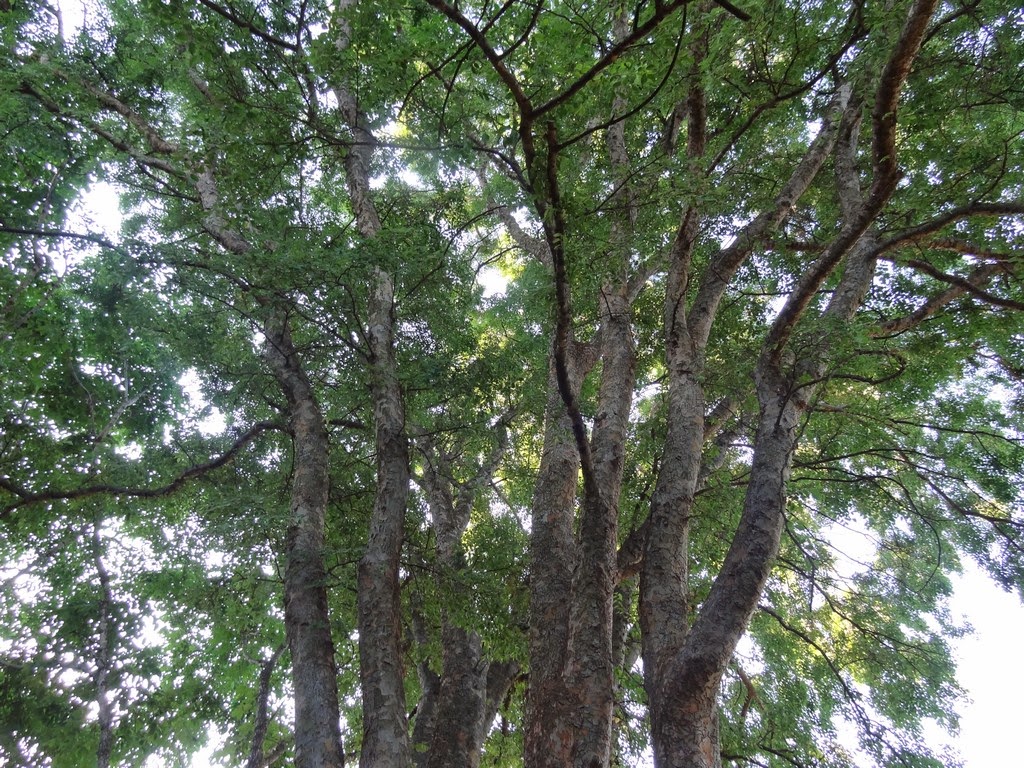 A huge Euonymus europaeus 'Aldenhamensis' was new to me, and I wasn't aware that the species grew so huge. Normally the “Spindles” are a large multibranched shrub; I still have 'Red Cascade' in the landscape. Other than its large size, I only know that 'Aldenhamensis' features pink-red fruits that hang from long stalks, and that it was selected in 1922.

Roses were well represented in the garden, replete with their goofy names. 'Bright Eyes, 'Scentimental', 'Drop Dead Red', 'Eternal Flame', 'Love and Peace', 'Colorific' and 'Livin' Easy' were just a few of the named clones. I'm not really a “rose guy” but I did like the name and flowers of 'Rainbow's End', and really, all of the rose bushes looked perfectly healthy. 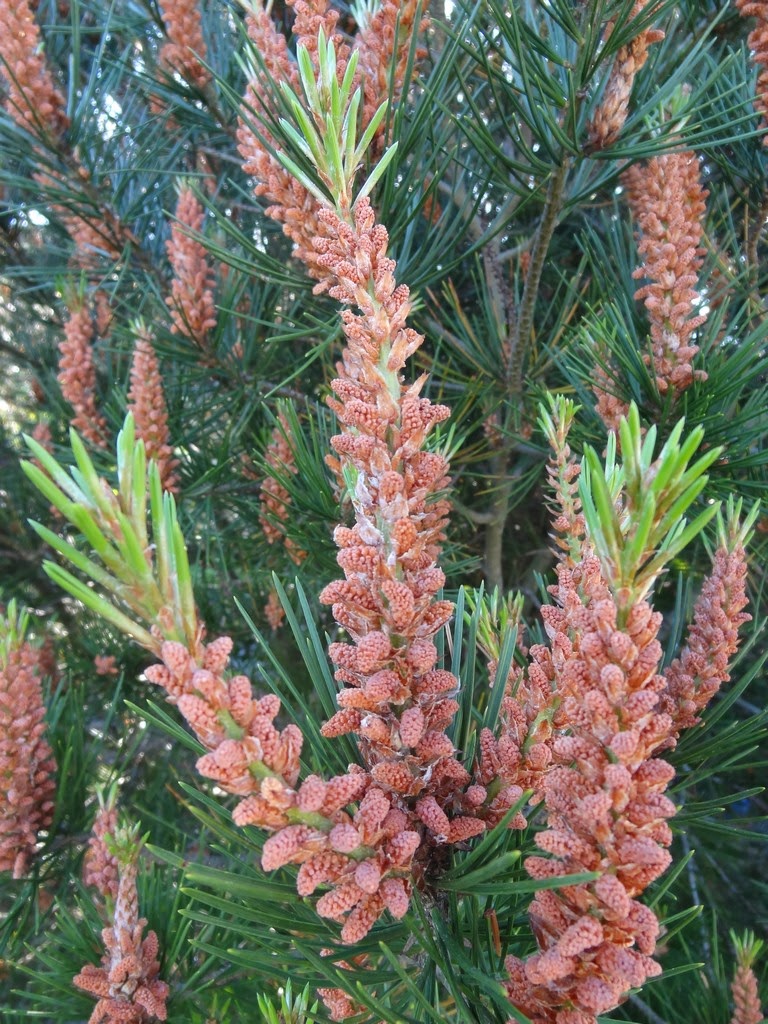 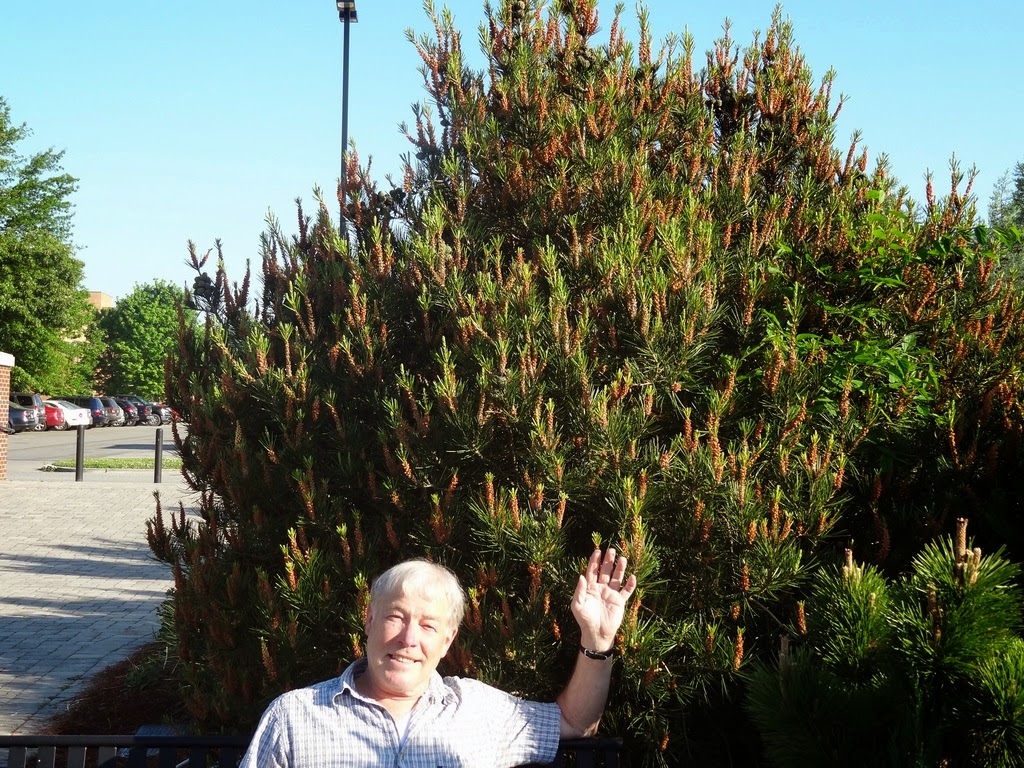 
Finally, I noticed a happy-looking compact specimen of Pinus bungeana. I was most pleased when the label read 'Temple Gem', for that was my introduction thirty years ago. I posed for my picture, which I am usually reluctant to do, and you can see how the Tennessee heat had caused my hair to turn blonde. We headed back to our car for the return drive to Asheville, and my only regret was that we were too early for the University of Tennessee co-eds to be awake and outside.

Posted by Talon Buchholz at 2:37 PM