The staff at Buchholz Nursery seriously despairs when I write about plants that we have discontinued, or plants that are sold out, or plants that I find interesting but we've never grown...or any subject that does not directly lead to sales and greater profitability...which would ultimately result in a higher wage for said staff. They have hitched their wagon to my horse for better and for worse, and naturally none of them do or should trust me unconditionally. I saw in the newspaper that a lucky stiff won an ungodly amount in the lottery, an "investment" I never pursue; but I'm happy for him if it doesn't ruin his life. Frankly, I'd love for my life to be altered by a lottery win, and let's see...just what would I do?

First of all I would give each employee a million dollars, as a thank you for all they have given to me...er, maybe two million, because they really have given me so much. Yes you: Juan, Dulce, Seth et al...then you can go ahead and ruin your lives too. It would be a fun experiment, as I know all of you so well...or do I? Or do you? Who knows who/what you would turn into? Who would you become? 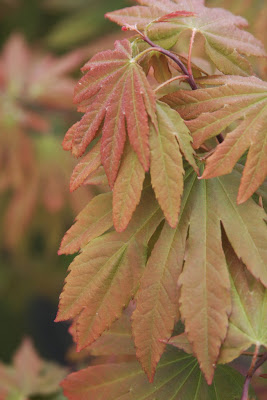 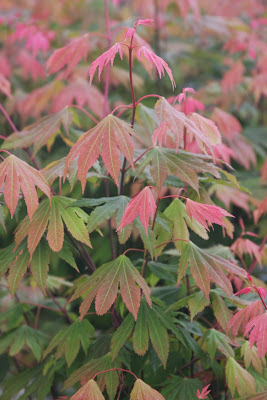 Ok, we'll never know. While no employee at Buchholz Nursery has amassed any monetary wealth, we are all rich for visual delights which entertain us every day. Even now, in mid-August, one can sense the transition into fall. Against the backdrop of exhaustion, the second-growth of many maples has extended the season, so to speak, for the colorful new growth shines vibrantly (especially) against the faded old foliage. Acer circinatum 'Kisetsu dore' is on fire again, and is particularly luminous with the sun as back light. Its name poses a question, actually, which roughly translates to "what season is it?" Another cultivar to get fired up about is Acer palmatum 'Hino tori nishiki', which translates to "firebird," and also Acer palmatum 'Phoenix', and the two of these cultivars are indistinguishable to me without their labels. So once again: fantastic in spring, dull in summer, then fabulous again in late August. 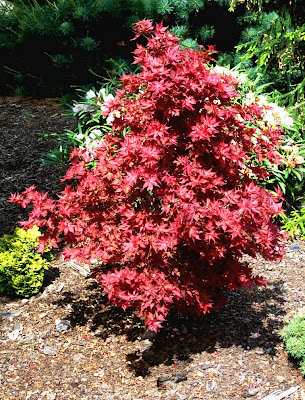 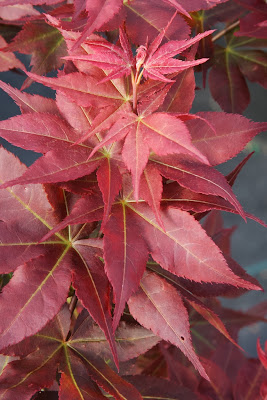 Acer palmatum 'Ruby Stars' was the late Harry Olsen's discovery, in fact he gave me my first plant. It is a perfect dwarf for our pumice gardens and alpine troughs, and my only complaint is that it is twice as slow as other dwarf cultivars. Congested foliage is deep purple in spring, packed tightly on short-internodal twigs. By the first of August the plant looks tired and the leaves have faded to greenish-purple. But just as you are ready to give up on it for the year, by the end of August fresh ruby-red star-like leaves will appear, and it becomes clear why it was named 'Ruby Stars'. A similar cultivar is Acer palmatum 'Beni hoshi', and its name translates to "red star" in Japanese.

The Italian nursery of Gilardelli introduced the excellent Acer palmatum 'Fireglow' years ago, and plants arrived in America just as I was beginning my career. I walked past my original stock plants this afternoon and looked up through the sun-lit leaves, and once again I was reminded that this cultivar was perfectly named. Near to the 'Fireglow' are large trees of 'Bloodgood', 'Shojo nomura', and 'Nuresagi', all of which were planted in one row so I could compare them. 'Fireglow' outshines them all in August, at least in my Oregon nursery. Imagine my surprise when Mr. G. himself toured the nursery, and we paused at my 'Fireglow' specimen. I was expecting him to beam with pride at his introduction, but instead he just waved it off as a has-been maple that was superseded by something better. I took note as he bragged about his new selection, 'Red Flash'. One has to credit Mr. G. for his commercially inspired cultivar names, such as 'Fireglow', 'Orange Dream', and now 'Red Flash', for they are memorable and aptly named. I eventually acquired 'Red Flash', but soon discovered that it didn't stay very red throughout the summer, and I wondered if I had the correct plant. Then one summer – at about this time – my bronze-green trees sprang forth with bright red new growth, and I caught on as to why G. had named it 'Red Flash'. But I don't really think that he was being straight with me about 'Red Flash' "replacing" 'Fireglow'; he was just hyping his new cultivar as any entrepreneur would, and truly he probably concludes that 'Fireglow' is the better tree. By the way, I received no acknowledgement or thanks for the time I spent to host Mr. G., but I did get a strange request the following year to send him scionwood. Maybe I am naive about Italian manners, but the message was worded such that I was "expected to perform my duty." I never did perform, and I've never heard from him since. Today I regret that I didn't make a stronger effort to establish a relationship, and I find myself feeling that way more and more as I age.


I don't remember where I got the fairly new cultivar Acer palmatum 'Ruslyn in the Pink'. I always record my source, but for some reason didn't with this maple. Maybe someone snuck it in when I wasn't looking. It is a dense compact tree – I won't say dwarf – and you can't see through the foliage at all. It is red, kind of, with some green in spring and early summer. By mid-summer it doesn't look ugly, but it doesn't look good either. We have a tree planted next to the office and I noticed on my way home that bright red new growth was shooting out from the top, and it looked pretty again. Never have I seen coloration that I would call "pink," however, so I'm not sure what's with the cultivar name.


Also next to the office is Acer palmatum 'Hana matoi', a large bush that has grown as wide as tall. It too had settled into quietude by midsummer, but I see that bright pink shoots now adorn the outer surface. Hana is "flower" in Japanese, but then it also means "nose." "Hana matoi" was an Edo period device, like an inverted red mop, that was carried through the streets of Tokyo to signal a fire, and to provide directions for the firefighters in the wooden capital. The firefighters were usually a group of ruffians, and the inhabitants cowered in their presence, for sake was usually fuelling their fire. Tokyo denizens could only look on in horror as the firemen demolished their homes in order to contain the fire. Of course, during the second world war the city was reduced to ashes, and to this day I've only seen one wooden building in Tokyo, and everybody makes a big deal of the novelty.

Acer rubrum 'Vanity' is a great maple if you love gaudy variegation. Green leaves are splashed with white and the foliage holds up fairly well in full sun. For me the coloration is boring, except the pinkish-red new growth is pretty. If you like 'Vanity' you'll probably also go for Acer pseudoplatanus 'Eskimo Sunset' (Aka 'Esk Sunset'). It clearly does not fit into every garden situation, but does provide plenty of razzle-dazzle with green, pink and white on the upper leaf surface, and warm purple on the undersides. Both 'Vanity' and 'Eskimo Sunset' are a full zone more cold tolerant than the palmatums, but they are not nearly as elegant or dainty, at least in my opinion. 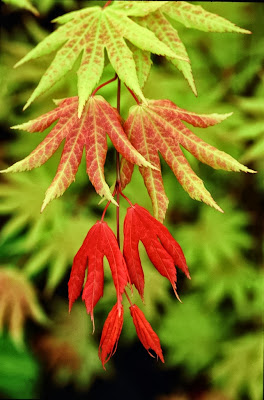 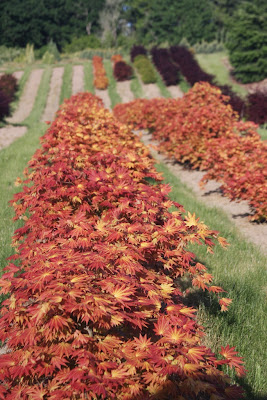 Acer shirasawanums 'Autumn Moon' and 'Moonrise' are known for fresh yellow-green leaves in spring. By July the leaves bleach to a lighter color, with 'Moonrise' going almost cream white. New shoots are appearing again, and the red color is deep and rich, and quite a contrast to the older foliage. Both cultivars develop broad canopies as they mature, and they respond well to thinning and pruning. I see that many nurseries do a poor job with these shirasawanums, for they insist on staking them, sort of like jamming a truant child into a straitjacket. We've learned to prune to achieve good shapes, and with experience once can develop a quality tree, but I admit that the shirasawanums are a challenge. 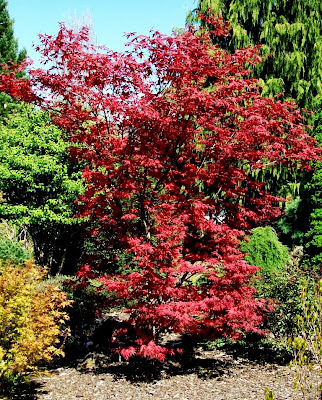 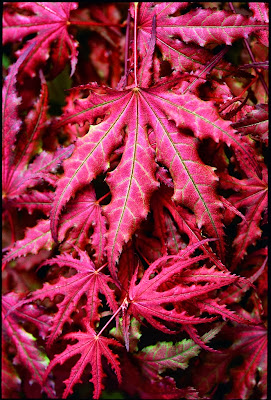 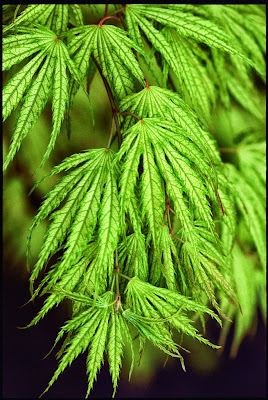 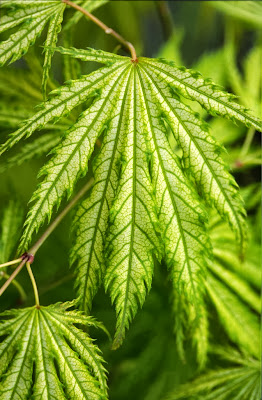 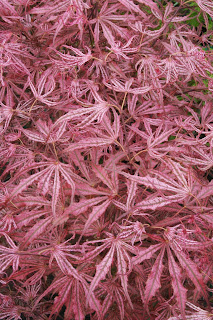 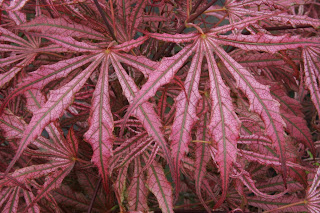 As I wrote in the blog of 6/21/13, A Reticulous Review, reticulated maples – those exhibiting a prominent network of veins – can display excellent new growth at this time. I make sure all visitors parade through Greenhouse 15, where half the house is devoted to maple seedlings, most of which come from reticulated parents like the "Ghosts," 'Ariadne', 'Tiger Rose', 'Mikazuki' etc. These seedlings are old enough to be in larger pots, but we keep pruning them back heavily. After a sever whack-job at the beginning of July, fresh new growth has emerged as if we were back in springtime.

We are selling these at a modest price in #1 and #3 sizes, for less than a comparable named-cultivar tree. These are known as "seedlings from named cultivars," but to avoid any confusion with the parents, I will not reveal their mother trees. Let's just say "pretty mom, pretty kids," and sometimes "pretty mom, fantastically beautiful kids." Some of these seedlings are more spectacular – according to recent visitors – than the parents they have arisen from. I deserve no credit for these exciting plants, although I am the host of this party. To see these seedlings in a large group, the kaleidoscope of colors, shapes and textures is truly a wonder of the world, and to my mind the beauty ranks higher than the Grand Canyon. I seldom use the popular word "awesome," for I don't even rank the Grand Canyon at that level, but the maples in GH15 are A W E S O M E. 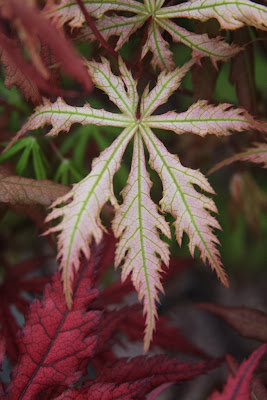 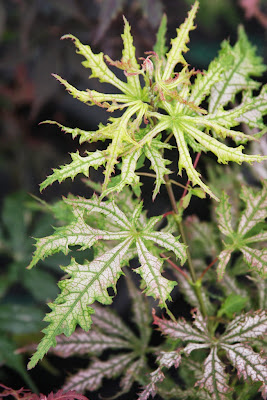 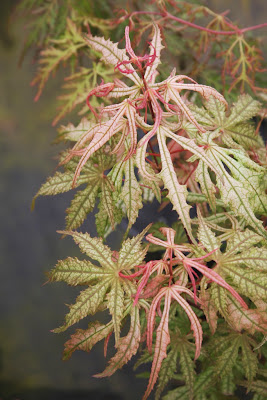 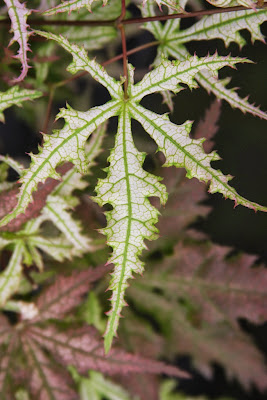 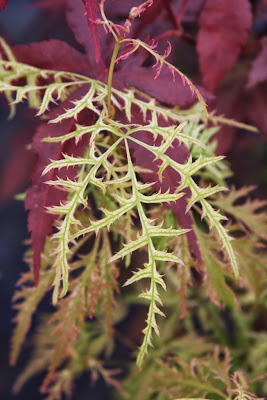 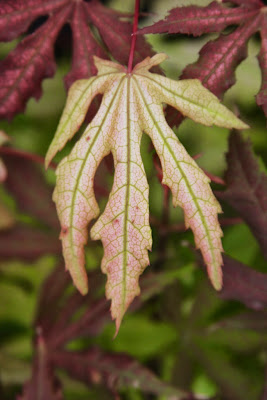 Posted by Talon Buchholz at 2:19 PM