A Garden of Winter Delights


The rain has stopped for a moment, but of course there will be over 200 more rainy days for us in 2013. We're creeping out of the depth of winter though, with a minute or two of more daylight each day. I walked through the gardens, and was impressed with a number of plants that look fantastic, even in the middle of January. So if you're gloomy or depressed with your winter, come along with me and we'll visit some plants that will make you smile. 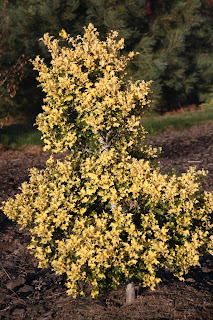 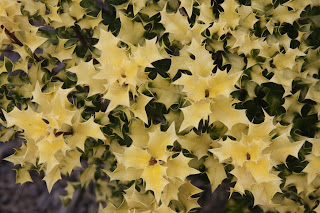 We stop first at the "hollies," and one in particular – Ilex aquifolium 'Night Glow' – throbs with color now. Foliage in spring and early summer is butter-yellow, then it evolves into yellowish-white when the hot weather comes. In January the yellow seems to have returned, glowing radiantly. 'Night Glow' is lost in my landscape in spring through fall, with too many other competing colors, but now it appears to be the garden's main event.

I would be remiss to not mention some other hollies that brighten up the landscape: 'Britebush', 'Crinkle Variegated' and 'Pinto'. All are variegated cultivars of Ilex aquifolium, and are gaily showing off this winter. I'm inclined to be a grumpy old man in January, in need of a Hawaiian vacation, but these evergreen treasures are not to be missed, and they sustain me through the dreary days. 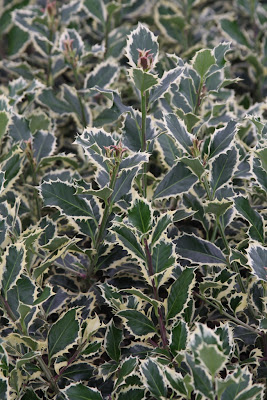 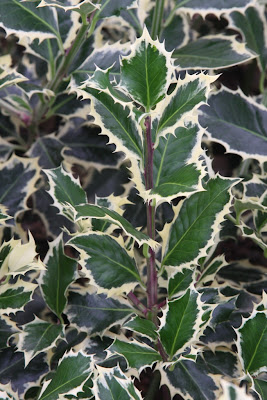 Ilex aquifolium 'Scotch' is another variegated holly that we have in production (God there's so many). So far it has never reverted, a problem that can afflict some of the variegated cultivars.

Ilex aquifolium 'J.C. Van Tol' impressed me when I encountered it from a distance at RBG Wisley ten years ago. Foliage was dark green and the berries were beginning to color. It was of large size, but with an interesting semi-pendulous form. I fought through the branches in search of a label – and fortunately the leaves were nearly spineless – to affirm my hunch that it was 'J.C. Van Tol'. My plant, located in the Upper Gardens, is rather lanky now, but I look forward to it filling out and looking stately like the specimen at Wisley.

I read once that the species name aquifolium (at least with Mahonia aquifolium) referred to the hooked barb at the leaf tip. Aquila is Latin for "eagle," whose beak resembles the barb of a leaf. Most plantspeople would assume it comes from Latin aqua for "water," perhaps because the shiny leaves appear to be always wet. Does anybody know for sure?

In England, the "Common" or "English Holly" used to be grown close to the house to keep witches away. In Ireland it was grown away from the house so as not to disturb the fairies who live in it. A heavy crop of berries was said to be a sign of a hard winter to come. Perhaps the "English Holly" was most useful to alcohol vendors: they set up their stalls under the trees to keep lightning away, hence the association with pub names. 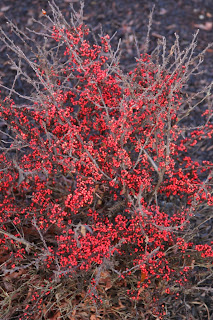 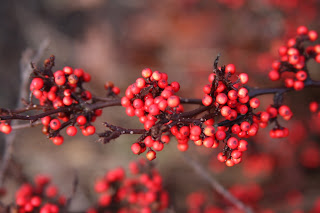 A Japanese holly, Ilex serrata 'Koshobai' is absolutely the cutest plant we grow, at least in fall and winter. The amusement is due to tiny, very tiny red berries which are borne in profusion, and they appear after the thin green leaves have fallen. The bright red berries are not much larger than the period at the end of this sentence, and my oldest specimens must have thousands of them. 'Koshobai' is nicely presented in a bonsai pot, which we always sell out of, and I perceive of it being the perfect Christmas gift. The cultivar name is due to the berries' resemblance to peppercorns; and yes, the Piper nigrum vine, while usually displaying black corns, can sometimes be red in color. I should mention that 'Koshobai' is autogamous, that is it produces berries by itself, without another pollinating plant. 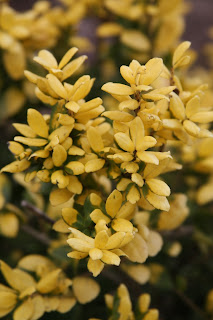 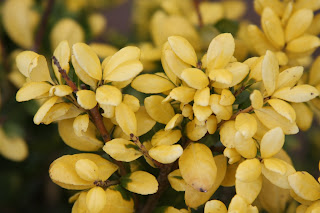 
Another Japanese Ilex species is crenata, an evergreen shrub named for its scallop-shaped leaves (from Latin crenatus). 'Dwarf Pagoda' is a delight at this time of year with tiny rich-green leaves. It is slow-growing and dainty and perfect for a miniature garden or a bonsai pot, and shiny black berries are an additional treat. 'Geisha' is another cultivar, but it features golden berries, while 'Drops of Gold' and 'Lemon Gem' are notable for their golden leaves. 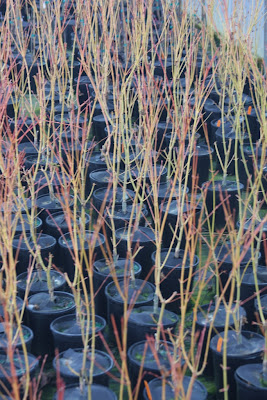 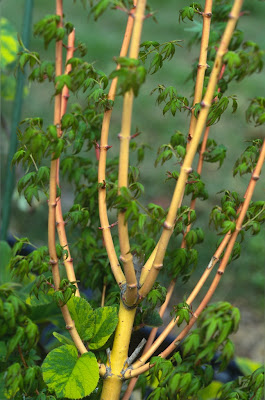 Not to be missed in winter is Acer palmatum 'Bihou' (pronounced Beeho). Though largely a non-event in spring and summer, in late fall the branches turn to a vibrant yellow-orange, which rivals those crummy dogwood bushes planted en masse along the freeways. 'Bihou' is surprisingly vigorous, and a bushy plant can attain six feet in height in only three years after the graft has been executed, at least in our nursery. We list it as hardy to USDA zone 6, or minus ten degrees F., but it is too new to know for sure. 'Bihou' was introduced by my friend Masayoshi Yano, a maple collector and author of Book for Maples, a Japanese publication. 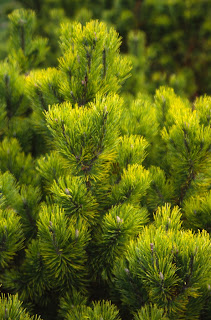 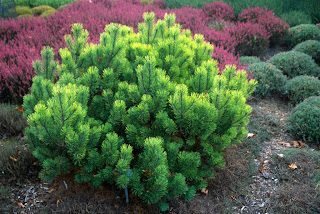 The golden pines are at their best in January, and virtually every species has one or more cultivars that exhibit this trait. In spring through fall, the color is usually green with a hint of yellow, but winter is when they show off the most. Pinus mugo 'Carsten's Wintergold' is perhaps the most golden in the species, but 'Ophir' displays a special glow, soft yet noticeable. 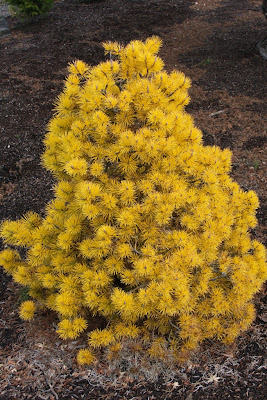 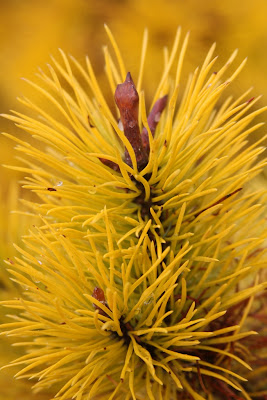 I suppose the most famous of the winter-gold pines is Pinus contorta 'Chief Joseph'. It was discovered by Doug Will in northeast Oregon's Wallowa Mountains, and named for one of America's most revered natives who lived in the area. Doug was hunting in the Wallowas one fall, and from his campsite he spotted something shining golden in the distance. He thought it was a yellow bucket or some other form of garbage, and he went out to retrieve it. To his surprise it was a pine, so he fetched a shovel to dig it up, and recounted to me that the ground was "as hard as a wedding night's _ _ _ _." Anyway the pine survived, or at least grafts from it, and now we have an immensely popular garden tree. The difficulty in propagation, and consequent high price, is why we don't see them in every landscape. 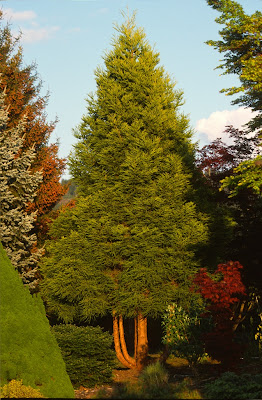 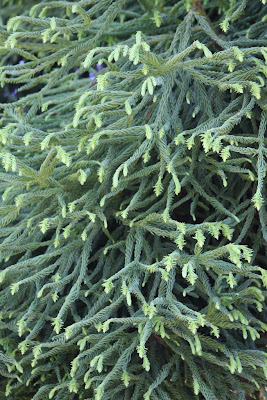 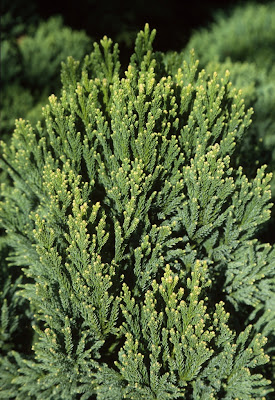 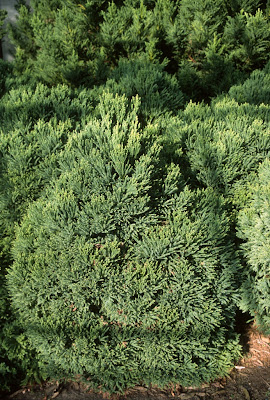 I always appreciate the "Japanese Cedars," Cryptomeria japonica, or I should say the cultivars thereof. Seen from a distance, Cryptomeria japonica 'Spiralis' forms a narrow spire; and it's laughable that it was once considered a dwarf, for our 28-year-old specimen is now 35 feet tall. One of its best features is its warm reddish-brown trunk. 'Little Diamond' is a dwarf, and it starts out with a dense, wide shape, and grows to about two feet tall by three feet wide in ten years. With more age, 'Little Diamond' seems less inclined to remain a spreader, and I've seen older specimens in Holland that are now more tall than wide. Both 'Little Diamond' and 'Spiralis' stay fresh green in Oregon, without the bronzing coloration of other cultivars. 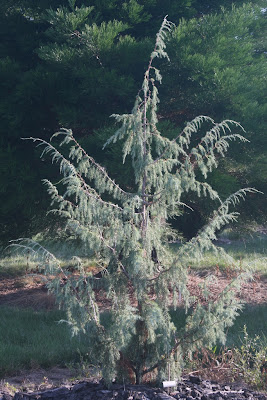 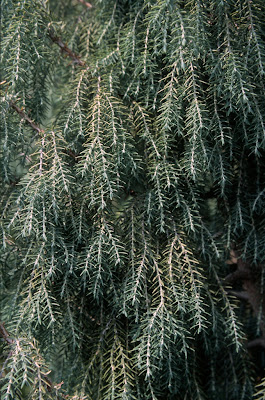 Juniperus cedrus, the "Canary Island Juniper" can vary in hardiness, as I lost various trees in the 1980's, but now have a strain that easily survives our winters. For any strain to survive in Oregon is amazing, for the Canary Islands are just off the northwest coast of mainland Africa, about as far south as Miami, Florida. The species name cedrus is apt, as from a distance the juniper does look like a younger Cedrus deodara. Silver gray-blue foliage droops luxuriously, and our 12-foot specimen looks quite nice this winter, particularly on cold overcast days. I've said it before: some plants absolutely look their best in January.

Picea abies 'Tompa' is another conifer that was made for winter. It forms a dense dark-green mound, and too bad this Norway dwarf wasn't named 'Green Gumdrops'. There are many dwarf green spruces, but the silver buds contrast delightfully against the rich dark foliage, and 'Tompa' is my favorite. 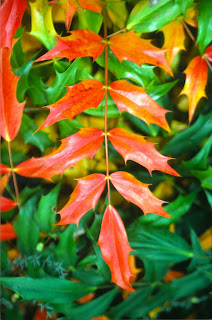 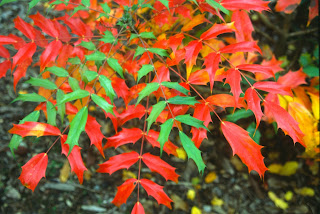 Mahonias are also a treat in winter. Most of our cultivars are in full bloom, attracting the hummingbirds, but I mean primarily the foliage. Mahonia 'Apollo' is deeply purple now, and it waits until the middle of April to bloom. Mahonia japonica can have orange leaflets, while some remain green. 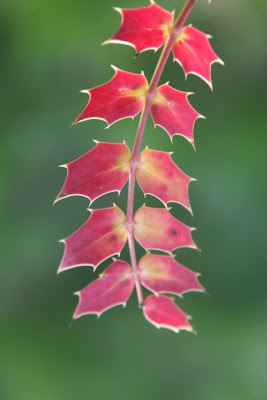 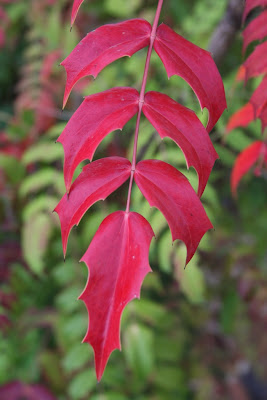 
Mahonia x media 'Underway' can have red stems, while most of the plant remains green. 'Winter Sun' is a beautiful shrub selected in Ireland, and displays yellow leaflets edged in red on selected shoots. The x media cross is between the Chinese species, lomariifolia, and the Japanese species, japonica, and while very nice it is only hardy to USDA zone 7. Older trunks on all Mahonia species can be very attractive, such as Thailand's Mahonia siamensis, but you'll have to go to San Francisco's Strybing Arboretum to see one. The genus name Mahonia honors Bernard McMahon (1775-1816), an American botanist who was born in Ireland.

I don't really care for the flowers of Nandina, but the berries can be attractive, especially on the cultivar Nandina domestica 'Umpqua Warrior'. 'Moonbay' is a tidy round shrub, but fairly boring in spring and summer. Today the shoot tips are brilliantly red, and are especially stunning with backlight. 'Firepower' is another dwarf, but with leaves more oval than 'Moonbay'. 'Chirimen' usually turns orange in January, and the thread-like leaves give it a refined appearance. But probably my favorite cultivar is the diminutive 'Senbazuru' which holds beads of water like jewels on rainy days. Nandina domestica, or "Heavenly Bamboo," is the Latin genus name which was adapted from Japanese word for the species, nanten.

There! That didn't take much effort to find colorful flora in the middle of winter. And don't forget, the entire garden changes with just an inch or two of snow, which might arrive shortly. But for today, I feast in a garden of delights.
Posted by Talon Buchholz at 3:02 PM