Exactly one year ago I was flagging orders at Flora Farm, last minute B&B that needed to be dug soon. The ground was still wet, in fact I could hear the gurgling of water beneath, as it traveled from the top of Fernhill to the Tualatin River via the intricate system of gopher tunnels on my property. And no!, Ginkgoes are not free from all diseases and pests, as the experts (copying each other) claim. Ginkgo roots and the lower trunks are a magnet for our "Willamette pocket gopher," Thomomys bulbivorus I believe, and they can totally kill a two-inch-caliper tree, indeed a field of trees.

Anyway, gophers have nothing to do with today's blog, and you readers all have your own individual pests and problems. In spite of my underground drainage and dead Ginkgoes, the earth smelled of spring, that smell of awakening…which quickly leads to anxious feelings…then to desperate panic as I realize that there's too much to do and not enough time. Ahh, soon it will be 100 degrees and my lips will be chapped!

I drove toward the nursery with plenty of work still to accomplish. Standing next to a flooded field was a pure white egret. The sun was breaking through the clouds and the emerald grass sparkled in the light. For some reason I drove past my turn, deciding to take a longer route. I had to get back to work of course, but sometimes the car has a mind of its own, sometimes it will decide where to go.

How about we take a drive around Hagg Lake first, the recreational and irrigation lake that was created about forty years ago? It sits at the eastern foot of the Coast Range, and while my nursery now benefits from its water, I was initially against its existence. The Coast Range was my old stomping grounds, gravel roads that went everywhere into the old Tillamook Burn. Other than hunters in the fall, this area was practically mine alone. As a teenager I slept many nights there, once watching a spectacular meteor shower, and with buddies drank my first beers. I even lived one summer in a self-made shack with a secret trail, and drove thirty miles Monday through Friday to and from my day job. This Walden Pond-styled experience ended when a friend became violently ill, and I abandoned camp when he was diagnosed with hepatitis. Years later I revisited this hideout with my own children; and even though the roof had collapsed after many snowy winters, the kids were impressed that Pops actually lived in the woods. "Were you a hippy?," they asked.

Instead of circling the lake and returning to work, the car and I took the old gravel road up to the summit, about an hour-long trip. So much had changed. Who owned these hills now? Roads went everywhere, and a sign said the road could be closed at any time. That would never happen, and besides my route would be to the summit--the source of my Tualatin River--and then I'd take the highway back. 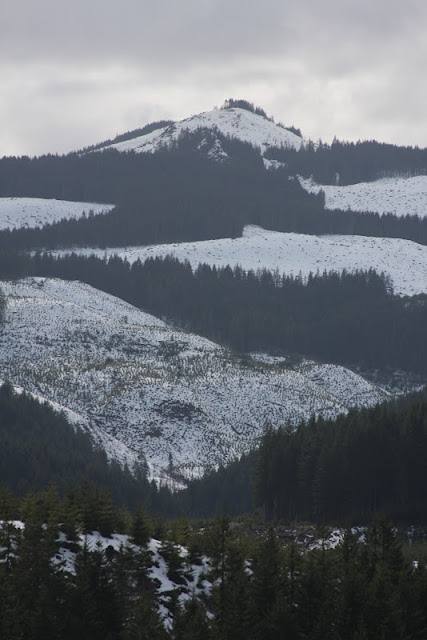 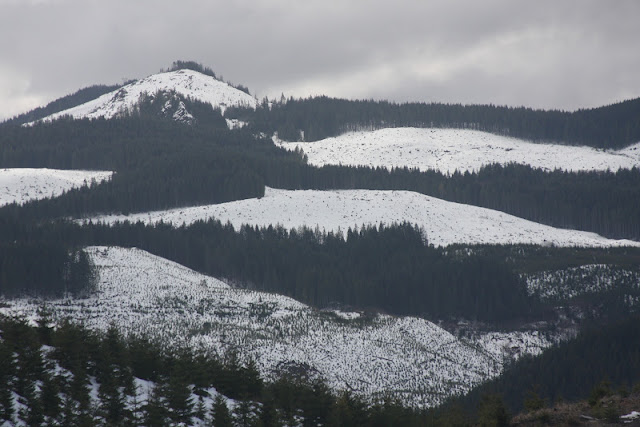 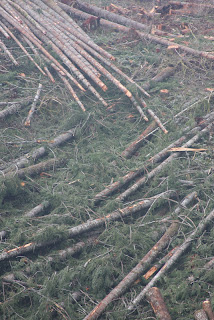 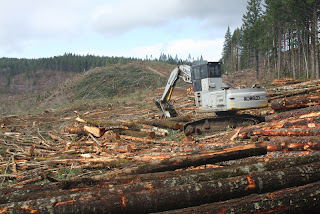 I took my time. There was snow on the highest hills, and where logged it created interesting patterns with the standing trees, mostly "Douglas Fir," Pseudotsuga menziesii, and "Western Hemlock," Tsuga heterophylla. There was evidence of current logging, but I was totally alone. Brush piles were neatly arranged, with the timber stacked up near the road. The sun would come and go, the sky filled with dramatic clouds that swirled closely overhead. I got out and walked around. Forget spring here: this was pretty wild. The hills displayed snow patterns and so did the logs. My camera recorded vibrant colors of the wet scarred logs, rich oranges and browns where the bark had been peeled. I wondered if the loggers appreciated their fantastic world, or if it was just a tough job in the woods? I felt young again, and so pleased with myself for allowing my car to bring me here, and I might just skip work for the rest of the day. My cell phone was out of range and no one would discover my truancy. 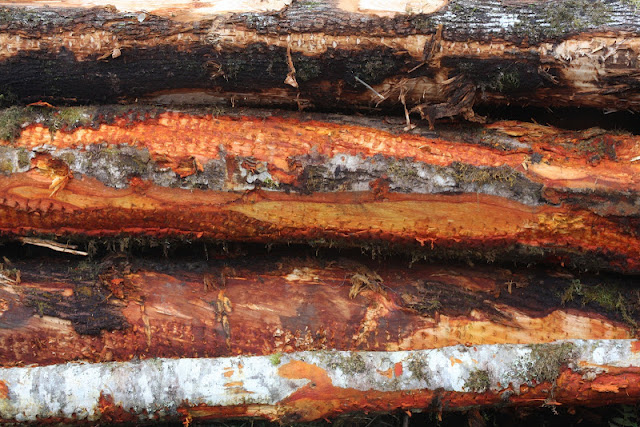 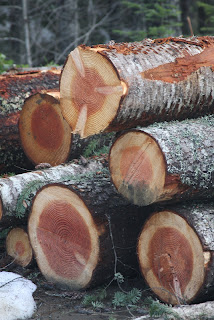 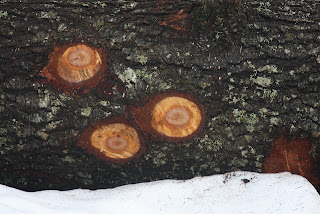 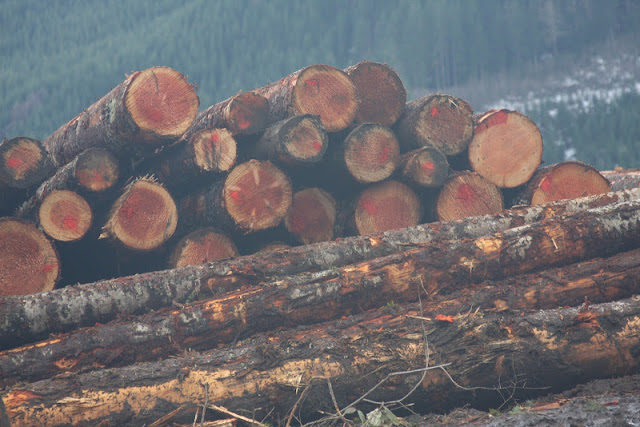 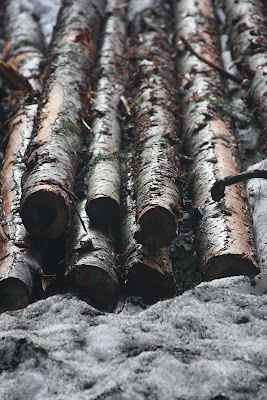 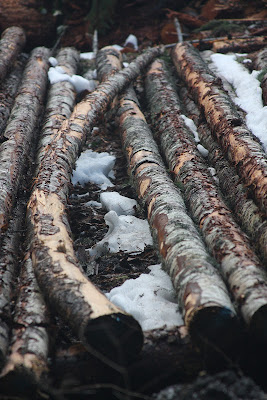 Sideways sleet ended the fun so I continued up toward the summit. A large owl, huge actually, swooped over my car and into the trees. Wow, nature! Everybody deserves a free day now and then. I grew increasingly concerned, however, as patches of snow bordered the road, becoming deeper as I ascended. On a shady curve there was snow actually on the road, and further up there was a lot of snow. I shifted to 4-wheel and continued. How much further I wondered? Well, it didn't matter how much further because eventually I reached too much snow. I carefully turned the car around and retreated. Oh well, still a great day. It was four o'clock and everybody would be gone by the time I got back. 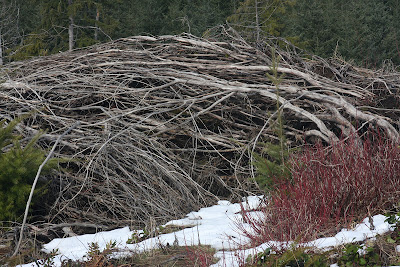 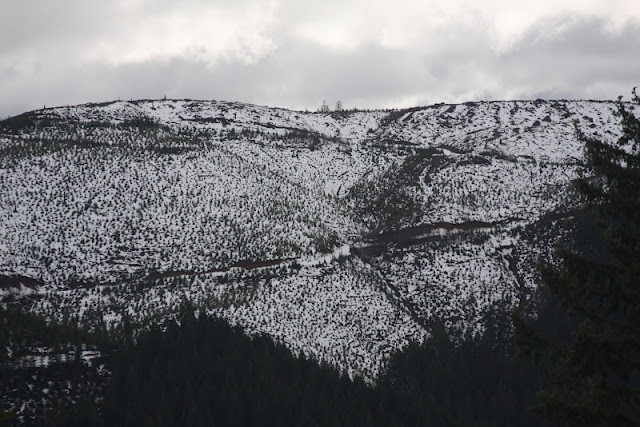 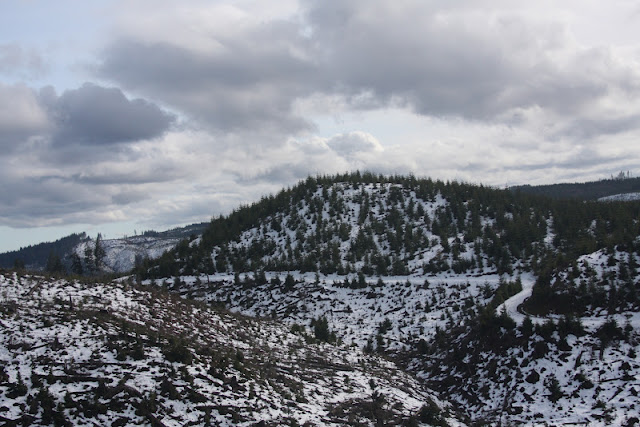 I descended at a faster pace, but it was still fun to witness the scenery in reverse. How did I miss that tree on the way up, or the colorful trunks in that group by the road? But  too late for more photos, just a little too dark. Nearing the bottom, suddenly my heart pounded. What? A big-ass gate crossed the road…and now I was stuck. God, the sign had warned me, but now, what? Shit Buchholz, what were you thinking? ("Myself" shifts to third-person whenever I do something dumb.) Why didn't I just go to work? 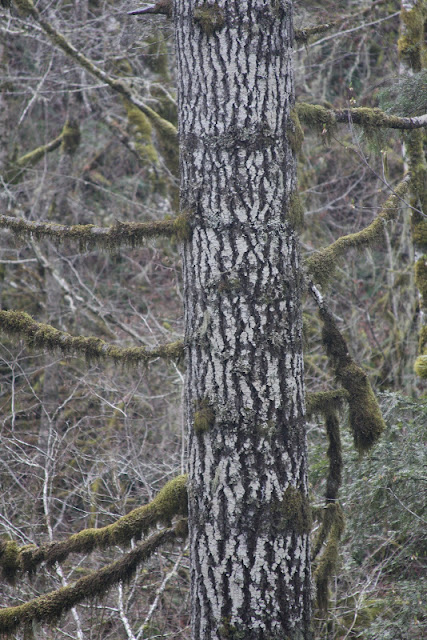 The lock was immense, and serious with dials and numbers. Could I break the code? I messed with it, then jerked it, but it was fool-proof. I was the fool, on the wrong side of the gate. It was Friday at 4:45; would I have to sit here, hungry and cold until Monday? Or walk the four or five hours to home? Shit Buchholz. Shit! I walked a few dozen steps down to the warning sign, hoping (I suppose) that it was not a guaranteed bona-fide warning, that perhaps some nebulous technicality would explain my predicament, and everyone would agree that Buchholz was the victim.

But no, the sign was proper and I was the idiot. I did notice a local phone number, however, I guess to S______ Lumber. Fortunately, my phone now worked as I listened to it ring. I doubted that anyone would answer, and it was now just a few minutes until five. To my surprise an office man finally answered and I explained my situation. Now, would he care? "What were you doing up there," he quizzed, "hunting?" "No, no I replied, "I thought I could exit at the summit." "Nope," he said, the road's closed cuz of snow." Geeze, duh Mr. Peabrain. Anyway, half an hour later he rescued me. I stayed in my car and gave him a feeble salute as I drove off.

It all seems kind of funny now, a year later, and I eventually told the story to others. Except my wife still doesn't know, and why should I make her worry? But I'm certain that I'll never go back up there. And I have a different car now, one that will hopefully take better care of Buchholz. 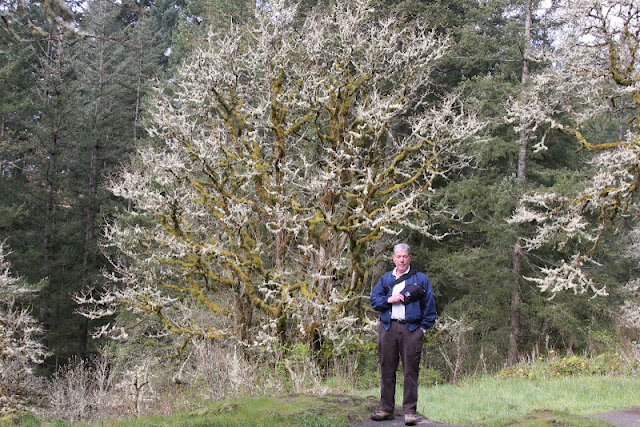 Posted by Talon Buchholz at 3:06 PM