Winter officially begins on December 21st, but we've been in the "dead of winter" for some weeks now. We come into work in the dark, lock up and go home in the dark, traversing icy roads or through thick fog. Year after year after year. 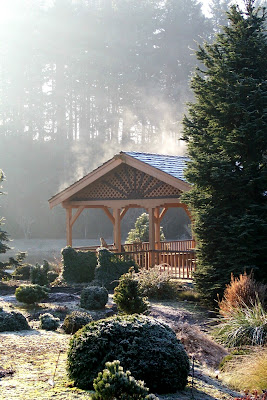 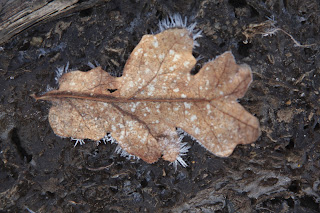 Perhaps the best cure for winter's blues would be a hot toddy to start the day, except then we would fall asleep by 10 AM. But the crew at Buchholz Nursery has game in all seasons, fully realizing that a cold job is still better than no job. For me, I bundle up and take a walk through the collection. 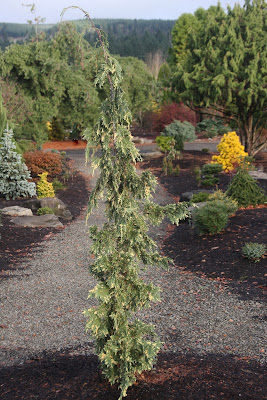 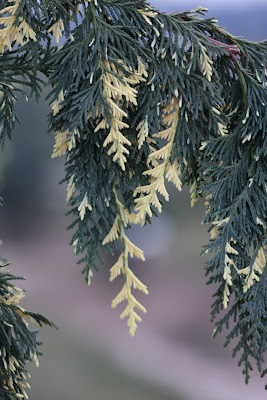 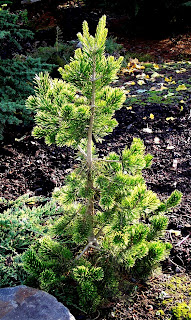 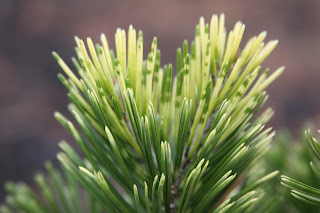 Many plants are better than ever in the winter. Chamaecyparis nootkatensis 'Sparkling Arrow', a new cultivar with cream-white variegation on dark blue-green foliage, shows color that actually intensifies when cold. The same is true for Pinus cembroides 'Pina Nevada'. The species, known as "pinions" or "nut pines," occur from the southwestern United States to north and central Mexico. I was given scionwood in the early 1990's from the late J.C. Raulston, from a variegated seedling found in Mexico on a plant-hunting expedition. You can google 'Pina Nevada' and see photos of the remarkable discovery. The tips of the gray-green needles are variegated in sparkling cream-white, notable and pleasing in spring and summer, but absolutely brilliant in winter. This is not a strong-growing cultivar--my nearly twenty-year-old tree is only 7' tall--and it eventually assumed an "alpine" form. Due to the slow rate of growth, we sell this only as a one-year graft; I'd be dead before we could ever have a crop salable in the field. 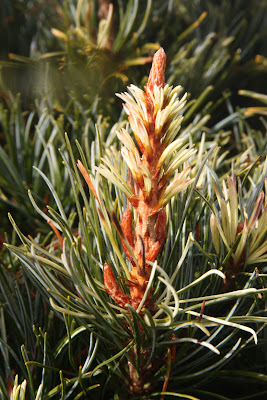 Another pine which lights up our winter garden is Pinus parviflora 'Tanima no yuki'. This choice dwarf cultivar was originally imported into America from Japan, with the spelling very wrong. For years it was called "Tani-Mano-Uki." The problem is that none of these three words exist in Japanese, nor should there be dashes between the words. One day my Japanese wife and I were walking through the garden, and I asked her what the name meant--I was told previously that it was "snow on the mountain." "Yuki" is snow, not "uki." "No" means "of." "Tanima," not "tani" means "valley." So my Japanese Sherlock pronounced "Snow of the valley," not "Snow on the mountain." In fact, "tanima" is a crude word Japanese men use to refer to a woman's cleavage. The correct spelling and meaning is gaining in use now, all thanks to my wife.

Well anyway, she doesn't really care about the spelling, she just likes the plant. In spring, new growth can have a pink color, with little white needles. Older foliage is dark green with silver undersides. In Oregon, it is probably best with afternoon shade, since we have very little humidity when it's hot. My original plant is about twenty years old, and is two feet tall by three feet wide. 'Tanima no yuki' is usually offered as one-year grafts, or as five-to-six-year olds in pumice stones, and we always sell out. 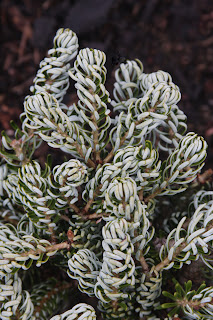 Also very quick to sell out is Abies koreana 'Ice Breaker', which we offer in pumice stones. 'Ice Breaker' was originally listed as 'Kohout's Icebreaker', as it originated as a witch's broom mutation on an Abies koreana 'Silberlocke', discovered and introduced by Jorg Kohout of Germany. 'Ice Breaker' is a compact, spreading cultivar, with even more of the needles silvery undersides in display than the 'Silberlocke' parent. Some may eventually develop a leader, but for now our plants have not. It will grow to 8" tall by 12" wide in 10 years if grafted onto a vigorous Abies rootstock, or more dwarf if propagated as a rooted cutting.

Now, there are so many plants that look great in our winter garden. Acer tegmentosum 'Joe Witt', a striped-bark "Manchurian Maple" selection, features chalky-white bark. It was named for the late curator of the Washington Park Arboretum in Seattle. His daughter worked at Buchholz Nursery for a few years, and we were also given a start of another of Witt's selections, Acer davidii 'Serendipity. 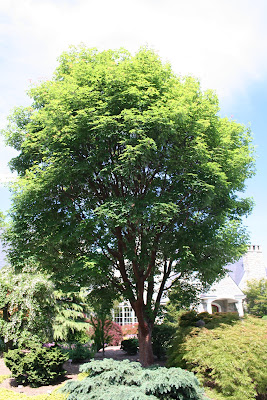 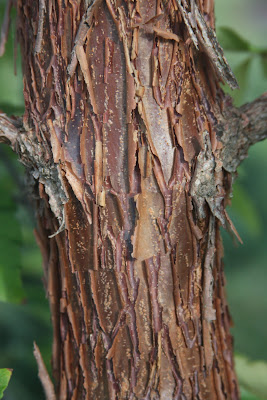 Of course the Acer griseums are fantastic in winter. Due to over-zealous seedling growers, griseums are readily available, and at a much lower price than a decade or two ago. The same could be said of Stewartia pseudocamellia. I continue to be impressed with the Acer griseum x Acer maximowiczianum hybrid, 'Cinnamon Flake'. The griseum species is native to central China, while maximowiczianum (more easily known as the "Nikko" maple) comes from China and Japan. The Nikko blood results in a tree with leaves and seed similar to Acer griseum, except much larger. I'm also pleased with 'Cinnamon Flake''s robust rate of growth. The bark doesn't peel as much as Acer griseum; it's more like a dark-brown version of Acer triflorum.

I could go on and on about individual plants. Just looking out of the office window I see many more candidates. But just in general, the conifers seem to glow more in winter; the spruces are more blue it seems, the pines show off their buds, and cones hang like ornaments. We've had cold, frosty and/or foggy mornings the past couple of weeks. For many that is depressing, but I get to come to work in a nursery with beautiful gardens.

Posted by Talon Buchholz at 3:21 PM