One excuse for our European trip was to attend the International Maple Symposium, held in Antwerp, Belgium, a two-day conference with lectures, followed by a three-day post tour to botanic gardens and a maple nursery.
We checked into our hotel, a high-rise rectangle with a large orange-red sign which could be seen for a mile. This hotel is yet another big-city enterprise where the cost--even at our reduced rates--never lives up to expectations. 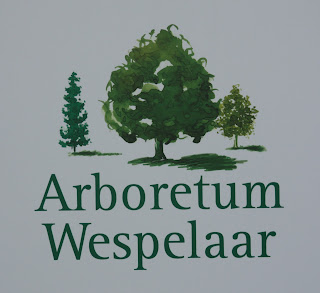 Never mind that. The next morning we left for a half-hour drive to Wespelaar, to the famous arboretum owned by Philippe de Spoelberch. The collection was started in 1985 and has become a world-class arboretum and scientific institution, noted for its plantings of Acer, Magnolia, Stewartia and Rhododendron. Botanical explorations around the world have resulted in the introduction of plants from known wild provenance, some on the Red List of endangered plants. But more than a scientific laboratory, Wespelaar has a beautiful, peaceful charm. I think most visitors come away with the feeling that the money (Spoelberch's) was well spent.

I won't go into detail about the lectures, except to say that they were given by botanical heavyweights. On the podium for the day was Koen Camelbeke, Cor van Gelderen, Tony Aiello, Augustin Coello-Vera, Peter Gregory and Piet de Jong. My experience with Maple Society events is that there are two general groups of attendees: the "botanists-dendrologists" and the "cultivarists." The botanists are forever arguing about the identification of a species and how it should be classified. There is sort of a pecking order to the botanists, which can be amusing when they disagree. The cultivarists, usually collectors and growers of Acer palmatums, japonicum and shirasawanum (i.e. Japanese Maples) grow weary of the debates. When the botanists can't agree, they'll walk away from the tree and proclaim that "it's probably a hybrid." 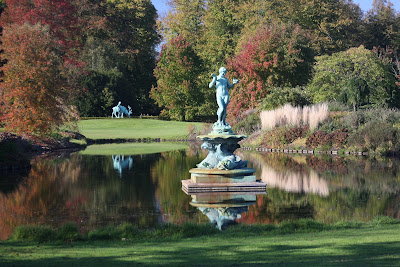 Enough! We still had time for a two-hour tour of the arboretum in the afternoon. Our hosts constantly remarked how lucky we were, to have blue sky and pleasant weather late in October. Yes, so why were we sitting in the lecture hall most of the day? With my newly attained freedom, I ran into the garden to see the trees, at my own pace, which is never with someone else, let alone a group. 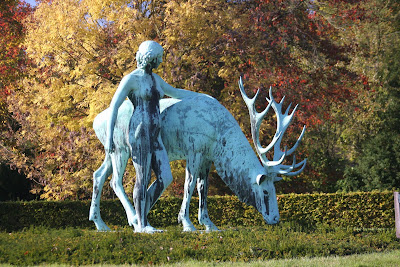 I was impressed with plants known and unknown, or with those simply underappreciated by me previously. The Acer pensylvanicums were stunning; they were not cultivars, but just the species collected from the wild in eastern USA. A species unknown to me was Acer calcaratum from Laos and Burma--handsome but certainly not hardy for Flora Wonder Arboretum. Acer micranthum, the "Small-Flowered Maple," a neat, small tree from Japan never disappoints for autumn color, and even features pink seeds. Another new species for me was Acer tsinlingense, from China and similar to Acer sterculiaceum. We probably have the only variegated selection of the latter, called 'Joseph's Coat'.


The largest specimen of Carpinus betulus 'Columnaris Nana' I have ever seen stood proudly on the lawn. A fantastic Ginkgo biloba 'Fastigiata' skyrocketed into the blue sky, and I had never before seen another cultivar so narrow. Liliodendron chinense displayed a wonderful trunk, and so did Paulownia 'Purple Splendour' and Phellodendron piriforme.
A big surprise was the dainty beauty of Sorbus alnifolia, a small tree from Japan with red berries and rich-red foliage in autumn. This species is not at all rare, but I had never seen it looking so good before. Zelkova serrata was majestic with foliage just turning to gold, and of course with a reddish-tan trunk. Sapium japonicum, the "Japanese Tallow Tree," with deep-green leaves turning to purple-red in fall, is a tree I'd like to try, even though it is only hardy to USDA zone 8.

Besides colorful foliage, autumn brings on berries and fruits, and especially interesting Magnolia seed pods.
The tree collection was tied together with a rich green lawn, and here and there were some very tasteful statues. One got the sense of space in this arboretum, with distant views, but at the same time it felt intimate to me. Around every corner was another wonderful tree or vista. Sadly, dark shadows grew longer and the bus began to fill, but tomorrow we would be back. 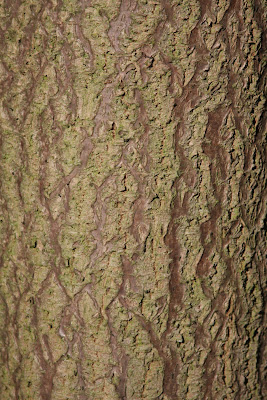 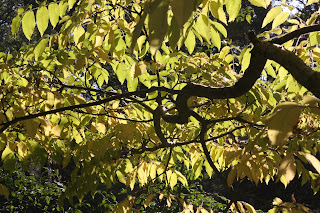 
European Trip Day 4
Sunday we returned to Wespelaar. I was still grousing about botanist Piet de Jong's comment a day earlier, that the hybrid of Acer griseum and Acer maximowiczianum (one such cross resulting in the cultivar 'Cinnamon Flake') "do not show an interesting bark and they are a collector item at the most." What? 'Cinnamon Flake', anyway, shows very interesting bark. The cultivar is vigorous with excellent fall color. Seeds and leaves are larger than just Acer griseum; indeed the previous owner of Birchwood Arboretum, Dean Linderman, described it as a griseum on steroids. For me, it was the most impressive specimen in his extensive collection.
Well, another botanist was quoted in a previous Maple Symposium, that "certainly we have enough Japanese Maple Cultivars." Ha! Since that comment was made, our small nursery has introduced Acer palmatums 'Japanese Princess', 'Mikazuki', 'Geisha Gone Wild' and 'Ikandi', just  to name a few. And from Japan: 'Akane', 'Ryu sei' and 'Amagi shigure'. And from Europe….. For me, these cultivars are like pretty girls: they're all new and different, and who tires of another one?
But I have no feud with the botanists, and I certainly wouldn't want to contend with one. Just stick to your day job, your microscope and pubescent undersides, and leave horticultural merit to nurserymen and hobbyists who actually have dirt under their nails.
Back to the lectures, which were good. Douglas Gibbs spoke of maple conservation in the 21st century. Philippe discussed autumn color in maples with colorful photographs. Indeed, he contributed photos to the excellent An Illustrated Guide to Maples by fellow countryman Antoine Le Hardy De Beaulieu. Sorry to the Europeans that Oregon's native "Vine Maple," Acer circinatum, does not color well in autumn. You're missing a lot.

John Grimshaw spoke on recent maple introductions, Hugh Angus on maple identification, and Paul Goetghebeur spoke on whether Acers should be in the family Aceraceae or Sapindaceae. He championed Sapindaceae and the botanists nodded in approval. How could it be otherwise? He also promoted the notion that Acer comes from Latin for "sharp," and should never be pronounced as it commonly is, "Ā-ser," but should be "Ahker," as in acute, or acropolis.

Finally, back outside, where attendees were divided into groups, each with a leader, to use the maple identification keys. Some were keen on the project, and spent a half hour on the first tree. The impatient truant in me quickly abandoned that project, and I struck out on my own again. And a good thing, for every hour or day or season, a tree is never the same. I chased the light, and experienced the collection anew, happy as could be. 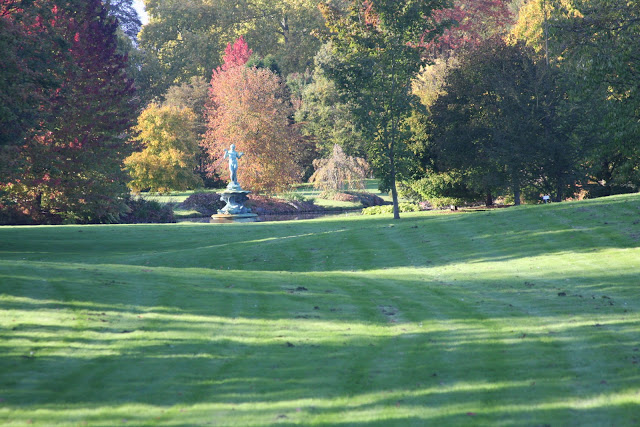 Arboretum Wespelaar:  can I return?
Yes, I must return!
Posted by Talon Buchholz at 3:16 PM