A couple of weeks ago I wrote that “botanical classification is a human endeavor, and that it is not a necessity of the natural world.* Nature doesn't care to arrange itself to fit into the cubbyholes of horticultural or botanical convenience.” Native Americans – and there's another classification – were intimately familiar with the plant and animal world, and learned what could be eaten, used to cure diarrhea, and what would help to keep mosquitos at bay. Of course the plants were known by local names, but I doubt there was any inclination to group them in any organized, international scheme.

*I recently read The Tangled Tree by David Quammen which inspired this thought. A fascinating book that expands your understanding of life.

The learned European cubbyholists have given different scientific names, for example, for the “Nootka cypress.” Scotsman Archibald Menzies first (scientifically) discovered the species in 1793 while on the Vancouver Expedition to the western coasts of the Americas. The Nootka cypress, or yellow cypress or Alaska cedar was originally classified by the Scottish botanist David Don (1799-1841) as Cupressus nootkatensis. However taxonomically it didn't fit in with the Cupressus genus and by 1841 it was placed with the Chamaecyparis genus because the foliage was borne in flattened sprays, and Chamaecyparis nootkatensis is how I came to know it when I began my career.

The specific epithet of nootkatensis – regardless of which generic name you subscribe to – refers to its discovery on the lands of the Nun-chah-nulth people of Vancouver Island, British Columbia, who were formally designated the Nootka. The natives tell of the trees' origin, where a raven encounters three young women drying salmon on the beach. The raven asks if they are afraid of...bears, wolves and other animals, but they respond that no, they're only afraid of owls. The raven was thrilled to hear of their fear and hid in the forest making owl-sounds. The terrified women ran up the mountains but turned into cypress trees, which explains why the species is usually found on the sides of mountains. It also explains why the Nootka bark is silky like a woman's hair, and why the young trunk is smooth like a woman's body. The conifer's foliage, when bruised, has a disagreeable (like cat piss) odor, but I don't know if that has anything to do with the Indian maidens.

We're informed today to call the cypress Xanthocyparis nootkatensis, the new name coined by Farjon and Nguyen to accommodate a near identical relative discovered in Vietnam, Xanthocyparis vietnamensis. In the Hillier Manual of Trees and Shrubs 2014, I read: “Just a few hundred trees are known to remain in the wild. Young plants from wild-collected seed raised by Don [should be Dan] Luscombe in 2011 are now established at Bedgebury...” The new discovery is a BIO (Botanical Interest Only) plant, and I'd wager that every one of the “few hundred” are ugly as hell, and probably not nearly as hardy as our west-coast nootkatensis. The Rhododendron Species Garden in Washington state has the Vietnam form planted out and it looks hideous with its mixture of adult and juvenile foliage which has the color of vomited asparagus. Nevertheless I am excited that new genera and species of plants continue to be discovered from distant lands on our tired old planet.

But not so fast, my friend, because there lurks the different botanical name of Callitropsis nootkatensis. Anders Sandoe Orsted (1816-1872) was a Danish botanist and marine biologist who published works on Arctic nematodes and marine algae, but he too weighed in on the cypress name. Callitropsis nootkatensis (D. Don) Oerst was published in 1864, but was overlooked or ignored by other authors. According to Oregon State University's Landscape Plants, “the name Xanthocyparis was proposed for conservation, but until that is decided on, it is correctly classified in Callitropsis.” OSU continues, “However, there is still more, Eckenwalder (2009) states that leaf chemistry and DNA sequences show that Alaska cedar belongs in Cupressus.” For what it's worth, the US Department of Agriculture, Forest Service, states that “On January 2016, the scientific name of this species was changed from: Chamaecyparis nootkatensis to Callitropsis nootkatensis.” 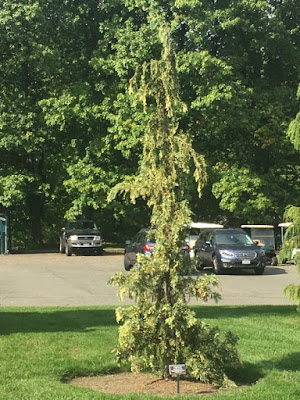 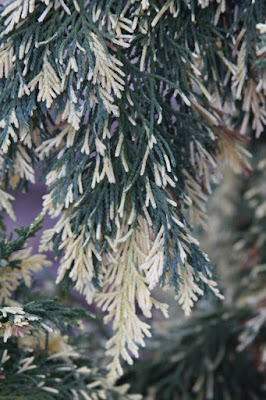 Enough! At Buchholz Nursery we continue to propagate and market the cypress as Chamaecyparis like always before. Cultivars of the species, and over 100,000 plants, have been distributed by my small company, and we are responsible for the introduction of the now ubiquitous 'Green Arrow', the variegated 'Sparkling Arrow' (seen above) at the New York Botanical Garden and the less-than-stable 'Laura Aurora'. While I normally pride myself on correct nomenclature, I'll probably finish my career by keeping the Chamaecyparis name, mainly due to the great inconvenience and confusion it would cause my employees with trying to keep up with all the recent changes. They don't care about proper nomenclature, and frankly neither do my customers.

In the late 1970's I noticed that C. nootkatensis – which easily roots – was being grafted onto the rootstock of Thuja orientalis, which we are now to call Platycladus orientalis, and the vendors of these grafts were east-coast nurseries of Dutch origin. It was a “secret” I learned when my nursery employer at the time purchased lining-out plants from a New Jersey company, and a sucker of P. orientalis appeared below the graft union. There were a few P. orientalis cultivars in the trade at the time, so I rooted one named 'Blue Cone', and then grafted the nootkatensis onto it. I was then a “propagation” nursery, mainly because I had no money so I had to sell plants when small. There was a niche back then for a grafted-liner nursery and I was one of the few who could provide the product. Other nurseries, however, were trying to figure out the details so they wouldn't have to buy from me. When I was asked about my rootstock's identity I would reply, “Thuja,” which was the truth, but only part of the truth. One nursery grafted about a thousand onto Thuja occidentalis 'Pyramidalis' and the owner was proud that they all appeared to “take.” A couple of years later he asked why they were all going into decline, so I fessed up that not just any Thuja would do, that it should be T. orientalis. Of course, he had no idea where to procure the orientalis species, so he resumed to buy my grafts.

The rootstock is no secret anymore, but a few years ago Dutch propagator Nelis Kools questioned the use of T. orientalis, that perhaps it caused the mature nootkatensis specimens to “go to seed,” a condition which is often unsightly in a conifer. He used nootkatensis seedlings instead. In soggy Oregon – yes, Holland is wet too – the nootkatensis rootstock does not seem as reliable in my experience. Our rich Willamette Valley soils, and perhaps our 100 degree F summers, are not to the liking of the mountain-side-dwelling species, so we continue to use Thuja...er, Platycladus orientalis.

I certainly don't have all aspects of nootkatensis production figured out. I've been very careful to not come across like the old Dutch coot I worked for while starting my own business. He had a big, round, white head but I often questioned just what was inside. He once proclaimed, “You cannot graft plants in a poly house; it must be in a glass house.” Well, I've produced far more grafts than he ever did, and all of them in my poly houses.

Perhaps equally as dubious as his glass-only propagation, I have a theory (well, experience) that nootkatensis grafting is cultivar specific, that the cultivar 'Van den Akker' does not perform as well on P. orientalis rootstock as say, the 'Green and Sparkling Arrow'. For me, a crop of grafted 'Van den Akker' will grow inconsistently, with some taking off with great vigor, but with others languishing as if the root's juice doesn't flow sufficiently above the graft union. Therefore we produce 'Van den Akker' exclusively via rooted cuttings. Other nurserymen scoff at the notion, and they continue to graft the cultivar. Too bad I don't have time and energy for empirical experiments to see who is correct.

Xanthocyparis – ok, I'll go current – nootkatensis ranges from southwest Alaska to northwest California, and as with glaciers, at the northern end of its range it occurs at sea-level, then at higher elevations as it is found more south. I have seen it in Alaska, in the Mt. Baker area of northern Washington, at Mt. Hood in northern Oregon, and in the Klamath Mountains in northern California...but relatively close to the Pacific Ocean. At Mt. Rainier in the middle of Washington I have hiked through old-growth stands – yes, growing on the mountain sides – where the trees were enormously wide with bleached-white trunks and branches, and without a trace of elegance. Near Timberline on Mt. Hood, in contrast, the trees are slender and epitomize the perfect “alpine” appearance. 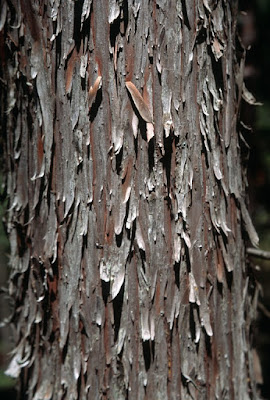 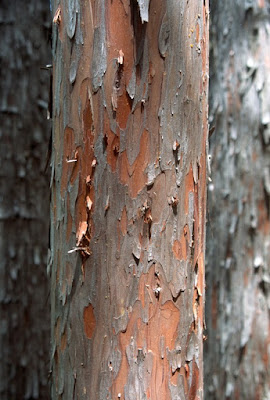 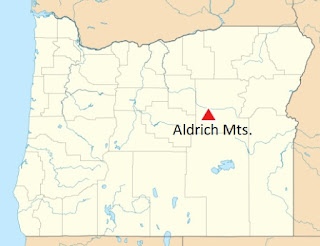 Imagine my surprise when I learned of a disjunct population in central Oregon at the Aldrich Mountains, with the highest point being Fields Peak at 7,362' (2244m). I almost didn't believe that nootkatensis really existed there. On a summer day I excused myself from the nursery and drove four hours east into the arid sagebrush environ, hoping that I would be able to discover at least a few Alaska cedar specimens. I was pleased when the road led to a parking lot at a trailhead, where there was actually a US Forest Service interpretive sign explaining that the 26 acre population has persisted since the Pleistocene, a left-over of a time when the climate was more wet and cool. I found some tall trees, none of them particularly attractive, but sadly most of the population was dead even though other conifers were thriving. I was happy to find them, and especially as they were easily seen along a well-groomed trail. But I was sweating at mid-day, and constantly swatting mosquitos that had just hatched after the recent snow melt. Let's just say it was a hurried affair when I stepped behind a tree to take a leak. For “research purposes” I felt it would be ok to harvest a few scions (totally harmless) but I made sure nobody was watching. I grew the 'Mt. Aldrich' form for a dozen years, but since the trees never looked “ornamental,” the last one was sold and that ended that nootkatensis chapter.

I remember reading a plant profile of Chamaecyparis nootkatensis 'Pendula' in Horticulture Magazine, where the author/editor extolled the tree's virtues. That was about 30 years ago and the author, who I won't mention, described the species as a perfect garden tree – a “delicate nymph” – and smaller and more suitable than, say, the large-growing Colorado blue spruce. “Delicate nymph” – hardly! Of course I have never gardened on the east coast, but I thought it was a ridiculous description. Besides, in my Display Garden a specimen of nootkatensis 'Pendula' grew half-again larger than Picea pungens 'Bakeri' and twice the size as P.p. 'Hoopsii'. The two spruces have since been edited from the garden, but the cypress remains and every time I look at the behemoth I question its garden worthiness. I don't produce 'Pendula' any more and I don't know many who do, as 'Green Arrow' and 'Van den Akker' are much more garden worthy. Both were available in the trade when the article was written, unknown to the author, and I unsubscribed to the crappy publication soon after.

I have made a lot of money off of nootkatensis cultivars in my career, but they are hardly my favorite conifer. If you agree with me, this must have been a difficult blog to endure.
Posted by Talon Buchholz at 11:54 AM