Years ago a visitor to Buchholz Nursery – his wife used to work here – left unimpressed with my place because “there's nothing normal there.” He couldn't understand why I was obsessed with the abnormal – the dwarf, the narrow, the weeping trees etc. He wondered why I didn't grow and sell the normal green Douglas fir, why I had to grow blue ones. He shook his head at the bizarre Dr. Seuss-like Pseudotsuga menziesii 'Skyline', and was astounded to learn that there are dozens of conifer species with whip-cord foliage.

Indeed horticulture is replete with the freaks, the mutants and the oddballs of nature, and there's a type of gardener that delights in “the more weird, the better.” I like a few strange plants in my garden too, but if that's all it contains the surprise factor is lost, kind of like with the boring women of Portland who all look alike with their purple hair, piercings and ink. The dumbest garden I ever saw was in Japanese where every plant was variegated. Apparently the owner tired of it too and ripped the plants out. 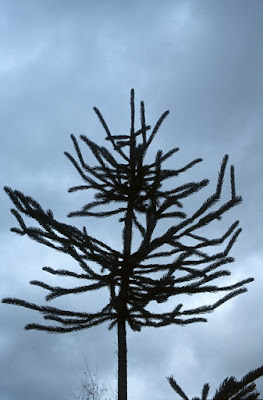 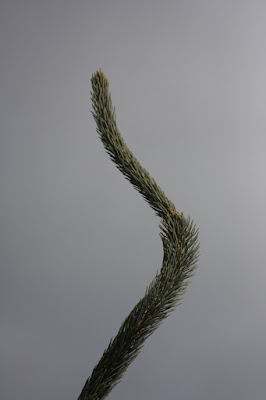 Nevertheless, let's take a tour of my abnormalities. Similar to the aforementioned 'Skyline' Douglas fir is Picea engelmannii 'Snake', and I've never seen two specimens look alike. At its worst 'Snake' can flop sideways with no tree-like tendency. The terminal bud can abort and eventually that branch will die, so harvesting scionwood means that you sacrifice a branch. I've only had one balanced, well-branched tree in my career (photo above) and I dug the medusa up and took it to our Farwest trade show. Everyone wanted to buy the freak, and in a fit of capitalism I sold it, but regretted doing so when we shipped it the following spring. Picea engelmannii is a western North American species but 'Snake' was selected in Germany in the 1980's.

Better behaved than 'Snake' is Picea abies 'Virgata', a cultivar of “Norway spruce” with long snake-like branches. It usually produces a single leader and has a well-balanced Christmas-tree shape. 'Virgata' was selected in 1853 and won an Award of Merit in 1978 – I don't know why it took so long for it to receive its due. It was Linnaeus who named Picea abies, a name that confuses some because it is not a true fir like the Abies genus. The genus name Picea is from Latin pix in reference to the sticky bark and cones. The cultivar name of 'Virgata' is from Latin virga meaning “rod” due to the appearance of the branches.

Thuja orientalis, the “Chinese arborvitae,” was named by Linnaeus, but at some point it was reclassified as Platycladus orientalis. The latter name means “with broad or flattened shoots.” It is called “cebai” in Chinese, and some specimens are known to exceed 1000 years of age. While we grow a few cultivars via rooted cuttings, we used to grow the species from seed, and then the seedlings would be used as rootstock for Chamaecyparis (Xanthocyparis) nootkatensis. One seedling was noticeably different with curiously twisted foliage and so it was set aside, and it was eventually named 'Locogreen'. This plant caught the attention of the late plantsman, Dick van Hoey Smith, and he took a photograph of it. In his book Conifers, The Illustrated Encyclopedia (1996) on page 652 it appeared and was named 'Lisa'. The label said “Lisa,” but Smith didn't realize that that was the propagator's name, and the other side of the label was 'Locogreen'. 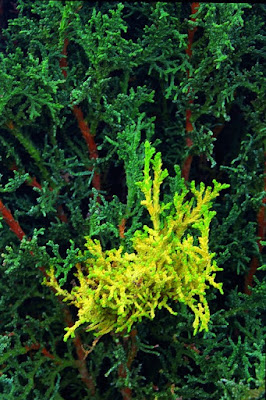 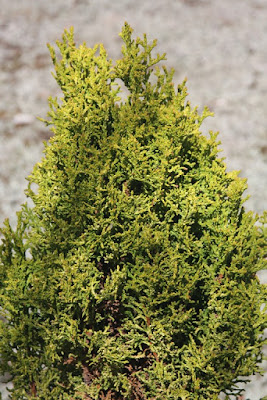 The original 'Locogreen' produced a mutation that was yellow, hence 'Locogold'. So far the latter has not reverted, but overall the color on a mature specimen is not as bright as it was with the original yellow twig, therefore I don't recommend it. 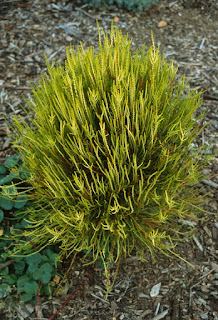 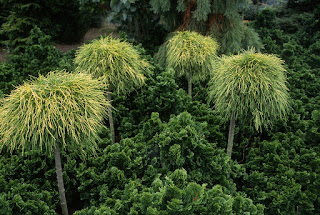 I don't have it anymore but at the beginning of my career I purchased Thuja occidentalis 'Filiformis' or 'Filiformis Pendula' from a large nationally-recognized nursery whose name begins with Mon and ends with rovia. The idea was to graft the thread mop on a 4' standard, and wasn't that a great idea? At one point, though, my stock plants produced the unique cones of Thuja orientalis. I called the company and the “horticulturist” said that, no, Thuja occidentalis was the correct species. I went to the trouble to photograph the cone, then took it in to the camera store and ordered a print. Remember, no digital cameras or email back then. So I mailed the photo and a month went by with no response, so I called. “Weeeeell,” I was told, “we'll continue to call it T. occidentalis because it has proven hardy for our customers in cold areas.” The following year it was still listed as T. occidentalis, so screw the proper identity. Then the year after that it was listed as just Thuja 'Filiformis' with no mention of a species. Anyway, I don't know if the box-store nursery still produces it, but I dumped my stock in favor of the better Thuja (or Platycladus) orientalis 'Franky Boy'. 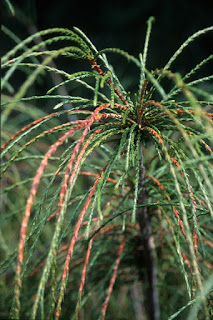 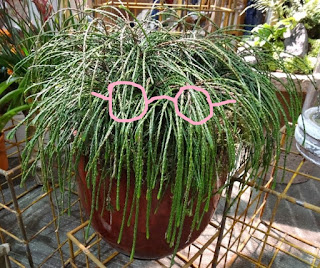 All of the Thuja and Platycladus species have a filiformis form. I used to grow Thuja occidentalis – yes, really occidentalis! – 'Filiformis' but for some reason discontinued it. Another was Thuja plicata 'Filifera Nana', and I have a large specimen in my Blue Forest that is 4' tall by 12' wide, and underneath is forever home to squirrels. I don't propagate it anymore, and have replaced it with Thuja plicata 'Whipcord' because I like the name better and the foliage is more dark than with 'Filifera Nana'. 'Whipcord' originated as a seedling at Oregon's Drake's Crossing Nursery in the 1980's, and now it is common in the trade due to its glossy green grass-like foliage. It is a wonderful container plant and the gardener will have an urge to put a pair of sunglasses on it, Mr. IT. 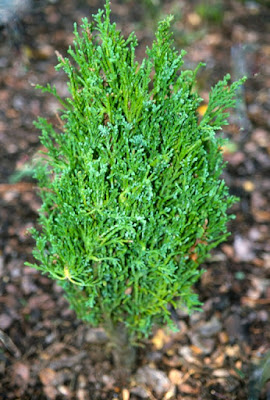 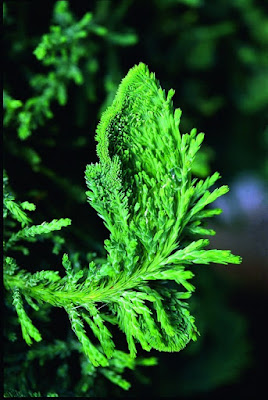 In October of 2000 a busload of coneheads from the American Conifer Society was visiting the nursery of Nelis Kools in The Netherlands. At the end of our visit a line had formed to photograph a tiny specimen of Chamaecyparis obtusa 'Drath Hexe', and I waited my turn also. It was weird to see the thread-like foliage with tiny cockscombs. By then I had already discovered the larger-growing Chamaecyparis obtusa 'Lemon Twist' which featured twisted yellow foliage, also with cockscombs, but the Kools miniature looked far more unique. Eventually I received cutting wood and the pieces all rooted. Every time I planted one out it would die within 6 months, and even in containers the little fellas would pop off one by one. Conifer expert Don Howse of Porterhowse Farm experienced the same thing and he speculated, “You know, I don't think it is a Chamaecyparis obtusa, I think it could be a C. lawsoniana.” I studied my stock with corrected eyes and of course it was lawsoniana, and how dumb I was to not have seen that at first. 'Drath Hexe' originated in Germany as a witch's broom on C.l. 'Drath' (often misspelled as 'Draht'), and a photo of 'Drath' can be seen on page 168 of Conifers, The Illustrated Encyclopedia, except that there too author van Hoey Smith wrongly lists 'Drath' as a C. obtusa. 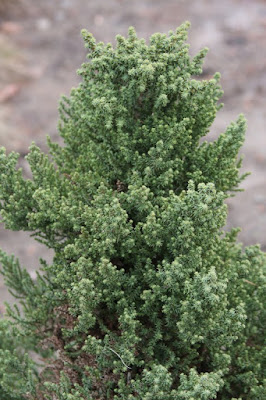 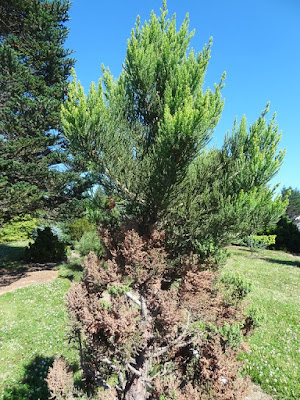 Kools Nursery also holds the Netherland's national collection of Sequoia, Sequoiadendron and Metasequoia cultivars. If they were all given adequate space it would take half of Holland; as it is now all you see are the trunks with the canopies crowding into each other. A Kools introduction is Sequoiadendron giganteum 'Little Stan', a miniature with gray-green juvenile foliage that originated as a seedling. It struggles sometimes in our winters when the foliage can burn, but I've never had one completely die. My largest specimen was about 4' tall and grew in the Conifer Field. I didn't pay attention to it for the entire growing year, but in winter I noticed to my horror that it had bolted, and 3' of regular Sequoiadendron foliage had shot out above the juvenile foliage. If 'Little Stan' would have been of witch's broom origin then I wouldn't have been so surprised; I have seen broom runts explode back to what they once were. The 'Little Stan' episode surprised Mr. Kools as well, especially since my plant was on its own roots. You could say that 'Little Stan' just couldn't contain himself, and eventually he was cut down.

The freaks and mutants of nature can also be dainty and attractive, and such is the case for Nandina domestica capillus 'Senbazuru'. That is a cumbersome name but the Japanese selection's name means, “A group of one thousand origami paper cranes (orizuru) held together by strings.” An ancient Japanese legend promises that anyone who folds a thousand cranes will be granted any wish by the gods. The crane is said to live for one thousand years, along with the tortoise and the dragon, so that's why one is made for each year. My wife is adept at origami and she can fold together a pretty crane in seconds, and the recipient of her little gift instantly beams a smile. More deeply though, cranes are a symbol of peace and are seen at places like war memorials or atomic bomb memorials. A sad story is that a two-year-old Japanese girl, Sadako Sasaki, was exposed to radiation from the atomic blast at Hiroshima. She developed leukemia, and terminally ill at age 12 – the age of my beautiful youngest daughter – she began to fold cranes inspired by the legend of senbazuru. After 644 she became too weak and died on October 25, 1955; however her classmates finished the project and today there is a statue of Sadako holding a crane in Hiroshima Peace Park. I hold hope that this pretty Nandina (or “Heavenly bamboo”) will inspired everyone to find peace and happiness. At first I thought that this blog would continue, but now I realize that it cannot...

Posted by Talon Buchholz at 9:03 AM