I have a two acre garden called the Blue Forest, where once every plant was a blue, or bluish, conifer. I eventually tired of it and proceeded to plant other colors, and now I like it much better. No garden has to be organized around a theme, just as our lives don't necessarily have to be lived with a guiding purpose...well, other than food and sex. Sometimes a plant collection – ranging in size from a small home-owner's plot to a huge arboretum – attempts a theme, such as the “state” trail through Portland, Oregon's Hoyt Arboretum, where California was represented by its native Sequoiadendron and Washington by Tsuga heterophylla etc. I haven't been on that trail for years, but I thought it was an interesting concept, and no doubt they copied it from somewhere else. 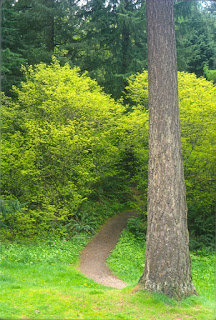 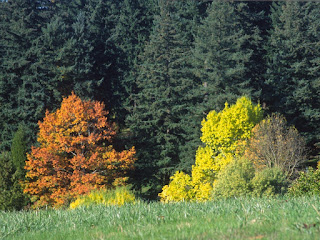 The Hoyt once had a director who proposed that the couple-hundred-acre collection should be entirely rearranged, so that you would have a Himalayan section, an Australian section and a South American section and so on. Since the Hoyt is owned by the city of Portland, he was an official government employee, one of a perplexing group who proposes grand schemes regardless if money is available or not.* It is not, really not. Some of the native conifers are a hundred years old, the Sequoiadendron have calipers of four feet and the old Pinus bungeana has a girth of canopy making it impossible to dig and move. It seemed like this public employee had no grasp on the concept of financial prioritizing, so hey: just float a bond measure.

*The debt for the city of Portland is nearly four billion dollars...and growing, and no one seems to care. The same attitude exists at the state level, and do you really think that Obama loses one wink of sleep over our staggering national debt?


My own plant collection is as “disorganized” as anyone's, with the only theme being that I plant what I like, and hope to make money from some of them. Recently I bought a Scilla peruviana var. hughii which features white blossoms, but I have no intention to propagate and sell any. I just wanted a companion for my blue-flowered S. peruviana, so I was thinking about the plant more than myself I guess.

To illustrate how disorganized my collection is, let's take a walk up the path in our Long Road section, a narrow rectangle at 385' in length and 40' in width. The anchor-tree at the west end is Cryptomeria japonica 'Elegans Aurea'. It was once considered a “slow-growing dwarf conifer,” but my 36-year-old specimen is already over 40' with four main trunks, all well over a foot in diameter. 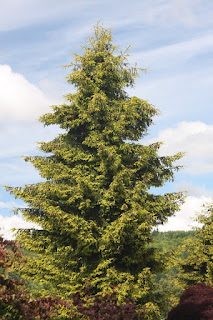 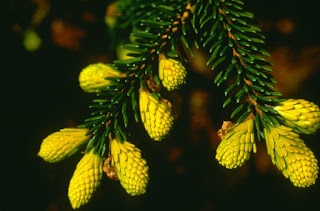 The Cryptomeria vies in height with a Picea orientalis 'Aureospicata', and both are about the same age. The Picea is from northern Turkey and the Caucasus region, situated between the Black and the Caspian seas. This area lies between the artificial boundary of Europe and Asia, and of course it defines pasty white guys like me. 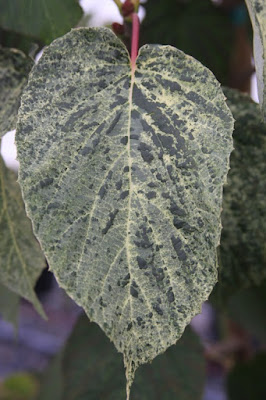 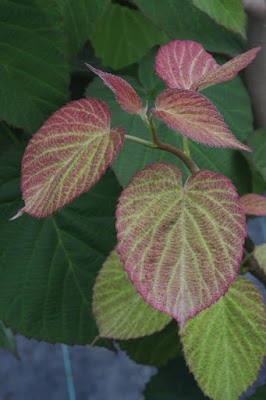 Within a few steps of these two conifers is Davidia involucrata 'White Dust', a cultivar which was gifted to me by Akira Shibamichi of Japan. Shee ba mee chee – with a last name like that you don't really need a first name. Actually he has sent to me a number of quality new plants, and it's not because he thinks so highly of me, but rather because he was fascinated with my charming wife who is quite adept at flirting with older men. The variegation on 'White Dust' does not impress me greatly – white spots on green leaves – but the reddish new growth is quite nice. 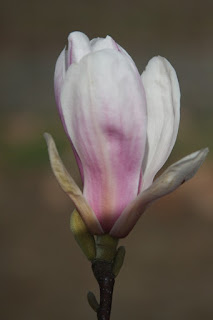 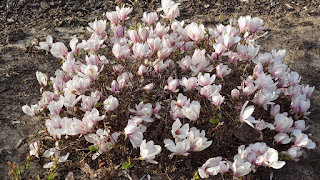 Near the three previous trees is Magnolia 'Kiki's Broom', a slow-growing bushy selection that originated as a witch's broom mutation. The flowers appear to be that of a M. x soulangeana, and though smaller, they bloom prolifically atop the tree. I was originally given scions of it by Greg Williams of Vermont, but I believe that he discovered it in a warmer state. Mr. Williams became reclusive and it is nearly impossible to communicate with him. After growing the plant for years I finally propagated it, and had to call it something. Kiki was a cute animated girl from Japan who flew from adventure to adventure on a broom in Hayao Miyazaki's 1989 movie, Kiki's Delivery Service. Adults will enjoy this film as much as children, and I can guarantee that it is more fun than reading my blog. 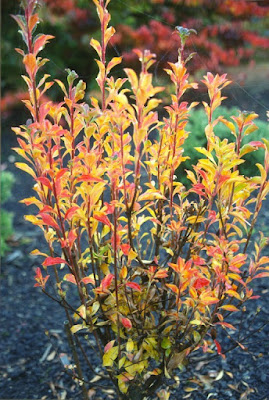 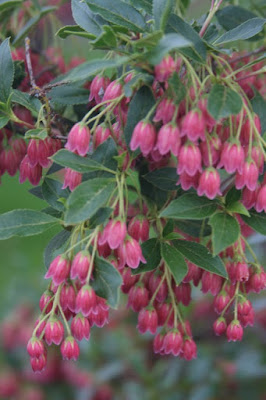 So far I've discussed four trees hodge-podged in close proximity, but their only connection is that I make a living by selling their progeny. A nearby tree that I don't propagate anymore is Enkianthus campanulatus 'Showy Lantern', and that is because you stopped buying them. That's a shame, for it is a very beautiful shrub with its red-bell flowers in spring and spectacular autumn foliage. My specimen is eight feet tall and only four feet wide and it fits nicely amongst the maples and conifers, never demanding any care or attention. 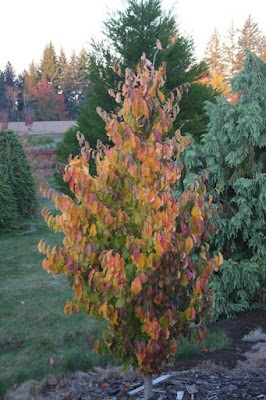 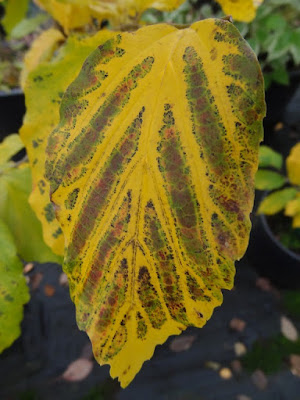 Two Parrotia persicas are in the Long Road section, 'Vanessa' and 'Persian Spire'. 'Vanessa' is considered the “columnar ironwood,” so it makes a good choice for smaller landscapes or near streets. While I still have one in the collection we don't propagate it anymore, and the reason is because 'Persian Spire' is far more narrow. It was discovered by John Lewis of JLPN Nursery from Salem, Oregon, and since it is patented I can only buy my starts from him. There's no incentive in him allowing me to propagate, and then pay the fees because my sales are too small to deal with the extra paperwork. I mention it because that situation affects the small nurseryman, that we're not large enough players to buy growing rights, and we're also too small to patent our own stuff like my blue Ginkgo.

But back to the trail. Magnolia x 'Vulcan' was more spectacular this year than any before. The tree is about twenty years old and it produced hundreds of blossoms...which are now littering the ground, but it was fun while it lasted. 'Vulcan' was a hybrid of Magnolia campbellii ssp. mollicomata 'Lanarth' with M. liliiflora, and it is a sister to M. 'Apollo', another excellent selection. The Jurys of New Zealand are responsible for the hybrids, and the next generation is continuing the work. The only problem with them is the use of M. campbellii which is native to the lower elevations in Nepal, India, Bhutan and southwest China. In one out of every four or five years in Oregon the buds will blacken from a hard frost, but that's a small price to pay for a tree of such great beauty.

A nice Chamaecyparis obtusa 'Harumi' is in the Long Road. It originated as a cream-white mutation on the green C.o. 'Tsatsumi', and displays 'Tsatsumi's' thread-like foliage. It's not unusual to find these, but that doesn't guarantee that they will grow into stably-variegated plants. Harumi means “spring beauty” in Japanese, and I named it before I had any clue that I would marry a Japanese woman. I first encountered the name in the travelogue Pictures from the Water Trade, an evocative and at times erotic story about a Westerner's discovery of Japan. Haruko and I named our first child Harumi Claire, so if she grew up and didn't like the Japanese name she could go by Claire. Whenever I walk past the 'Harumi' hinoki I'm amazed about how the stars lined up so that I would have a daughter with the same name. 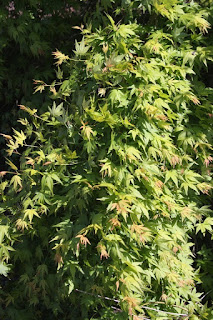 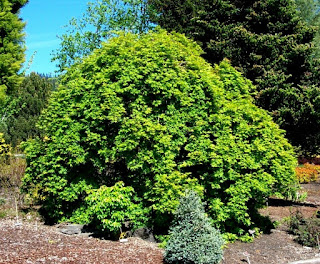 Acer palmatum 'Jiro shidare' was small when I planted it twenty years ago. I staked it for height, but for many years it looked ridiculous at best. Even though it was planted along our main road, I more or less forgot about it. Then one spring plantsman Don Shadow visited and enthused about the wonderful weeping maple by the road, but I didn't know what he was talking about. I went out with him and my gangly 'Jiro shidare' had blossomed into a real beauty, just as some skinny girls do. It's embarrassing to admit that I didn't notice her earlier, that it took a Tennessee nurseryman to point her out...on my property. 'Jiro shidare' was selected in Saitama Prefecture in 1968. Shidare means “cascading” while jiro refers to a “second son” (taro is “first son”). In the Vertrees/Gregory Japanese Maples it says that jiro means “white.” But not so, for shiro means “white.” By the way The Washington Post reviewed Vertrees' first edition, calling it “the ultimate book about the aristocrat of trees.” But there's no “ultimate” reference book, for it was already out of date when it was printed. It's a very useful book though. 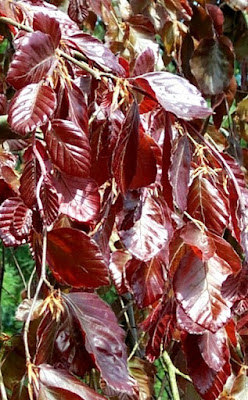 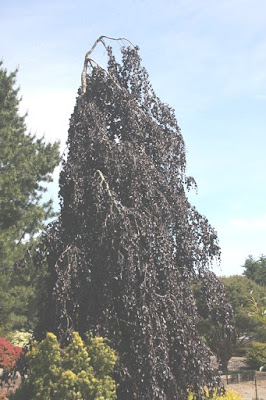 The Long Road contains an old specimen of Fagus sylvatica 'Purple Fountain'. After an initial stake, the cultivar will continue skyward on its own. Interestingly it does not remain balanced, for the north side is flat to the trunk while the sun-seeking south side stretches out. 'Purple Fountain' was raised from a seedling of 'Purpurea Pendula' in The Netherlands in about 1975. Even in the trade today, 'Purpurea Pendula' can be mixed up with 'Purple Fountain'. The former must be staked to develop height while the latter will do it on its own, but must be given adequate space in a larger garden or arboretum. Notice that the Dutch selection was not given a Dutch name, but rather an English name, and they usually do that as a European and American marketing ploy. Holland is all about the money, in fact it is said that copper wire was invented by two Dutchmen fighting over a penny.

Acer palmatum 'Spring Delight' has surprised me. I planted it as a 3-gallon pot with a one-foot spread about twenty years ago. For some reason it never gained any height like most that I grow. Now it is one foot tall by almost ten feet wide. At some point I'll have to prune to keep it from crossing the path. I am an “expert” on many plants, especially those that I introduce, but I continually find evidence that I don't really know what I am doing. I appear to be size-challenged, under-predicting how large a plant will get, and how quickly it will do so. There is nothing wrong with the older green laceleafs like 'Viridis' and 'Waterfall' etc., but 'Spring Delight' features leaves that are noticeably edged in red on the new growth. It is an added bonus to what is already a pleasing color. Similarly, a Japanese geisha is an attractive woman with a certain skill or talent – a gei – for singing or playing a musical instrument or in conversation, and not just merely a pretty girl. It seems that 'Spring Delight' spontaneously originated, suddenly it was at my nursery and I frankly don't remember what I used as a mother tree for the seedling selection. I only remember that I was so busy building my nursery in my thirties that I had no time for details of its history, and I regret that much has been lost.

There, I have demonstrated that my garden has no theme, no organized principle, and that I just plant what I like. But everything in the Long Road section is beautiful, except probably not for the meth addicts and criminals in the neighborhood. I love it when plantspeople see the nursery for the first time, especially like now in the spring when everything is so fresh and vibrant.

Back to the state trail concept, the following is a list of some states with their government-approved tree, and the year it was officially decreed:

Posted by Talon Buchholz at 2:32 PM