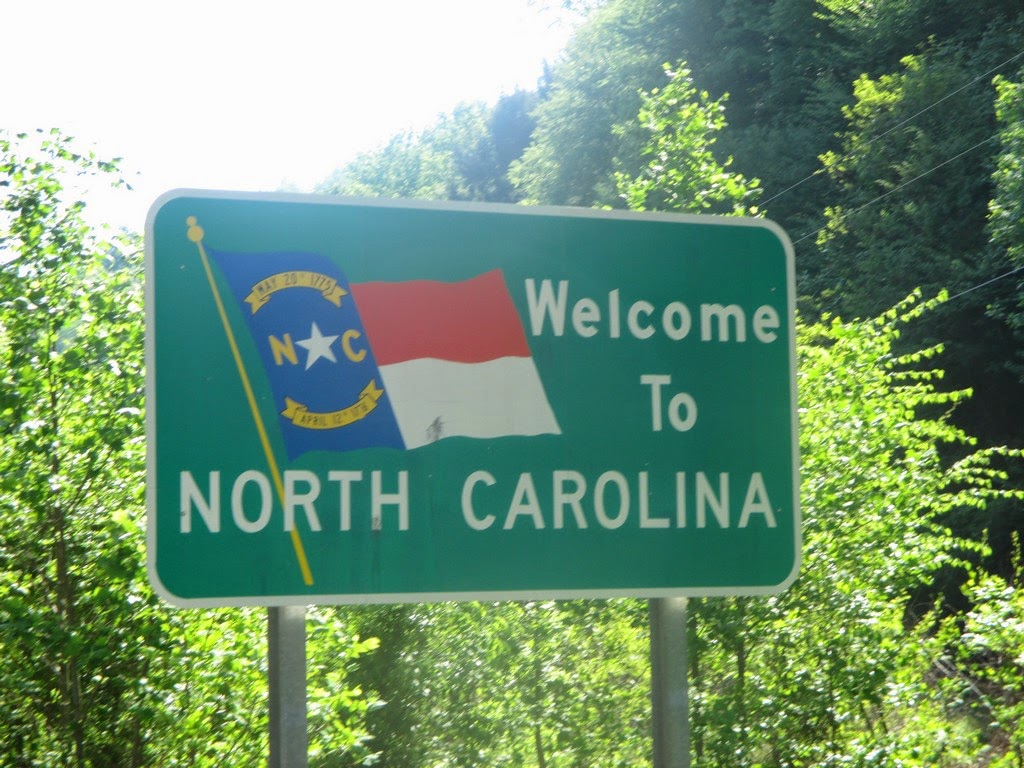 "Ya'll come back now, anytime," the North Carolinians declared during last autumn's visit. I grinned and mumbled "Thank you, thank you, I sure would like to." The goodness of the people and the beauty of the state stayed on my mind throughout the winter. Indeed it grew to the point where I charged my office-man Seth to order plane tickets – for the third of May, for both of us.

After dropping my daughter Saya off at her Saturday Japanese school, I navigated my way through the maze of condominiums and apartments west of Portland where Seth calls home. He was waiting at the curb – such impressive punctuality! – with his dusty, undersized suitcase and an anxious face. It is one thing to tolerate your boss for eight hours a day at work, but quite a greater task to endure him around the clock for a week.

Our itinerary was loosely structured, but Day 1 would begin with a return to the young stars of the maple world, the Nichols Boys as they are internationally known. Autumn's visit was impressive for fall color, but I longed to see the same trees with fresh spring growth. Matt and Tim have amassed a collection of over 1,000 species and cultivars of Acer, which is about twice as many as I maintain. They can pull it off because they are smart and passionate about maples and...because there are two of them. You can find out more about the Boys at MrMaple.com, but finish this blog first.

The Nichols' East Flat Rock nursery consists of greenhouses absolutely jammed with trees, often with just one or two of each cultivar, and it was a tiring experience for my brain to try and process the lot. Tim and Matt would enthuse about the trees, providing origin and cultural information, but it came at me so fast and furious that I'm not sure I remembered any of it, especially when both were speaking at once. One must wonder if they'll eventually narrow their focus, if they will ever simplify such as I have done, or if they'll always propagate a huge number of cultivars and not change a thing. The maple part was overwhelming, but they also operate a MrGinkgo.com, and grow other types of deciduous trees. Finally I was stupefied when I wandered into a greenhouse and discovered hundreds of potted Pinus sylvestris for the upcoming winter's grafting. I can only conclude that I envy the Boys for their energy. Some photos from their nursery follow, but I won't say anything about the trees because I don't grow any of them*; and please jump onto their bandwagon if you wish to learn more. 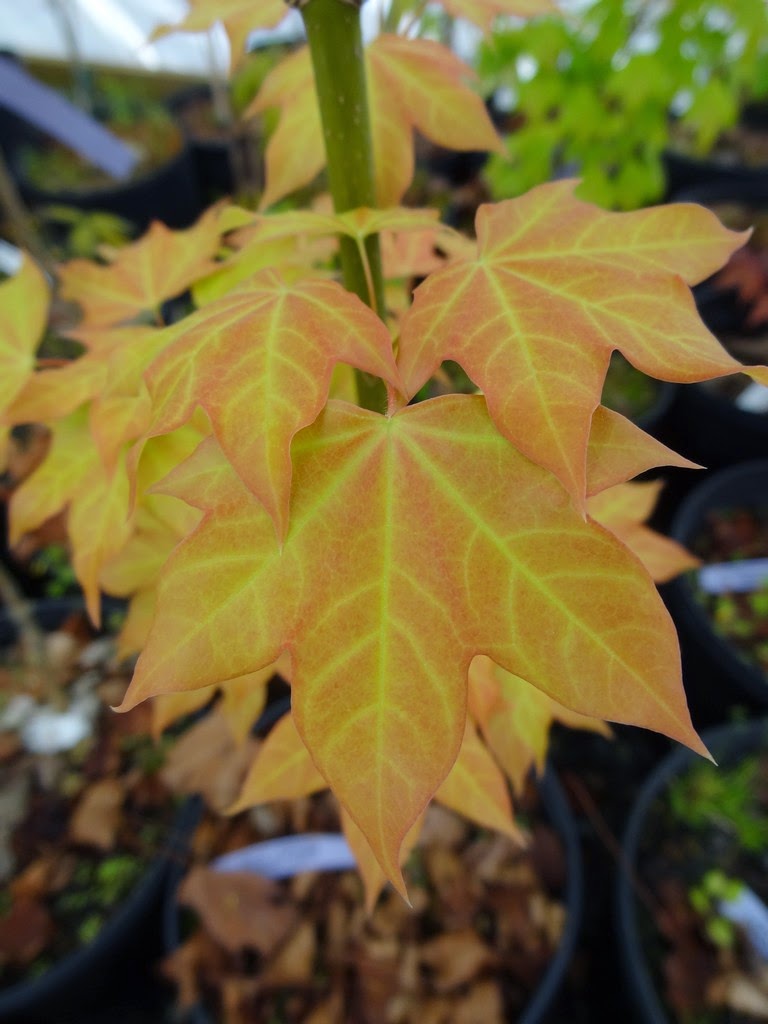 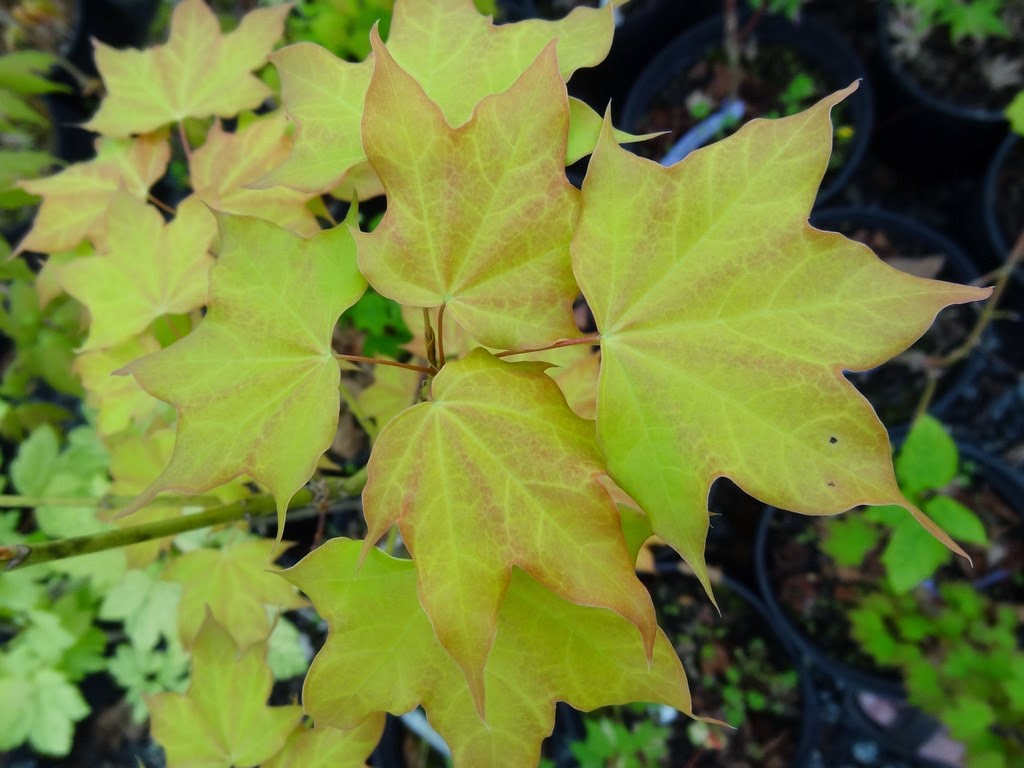 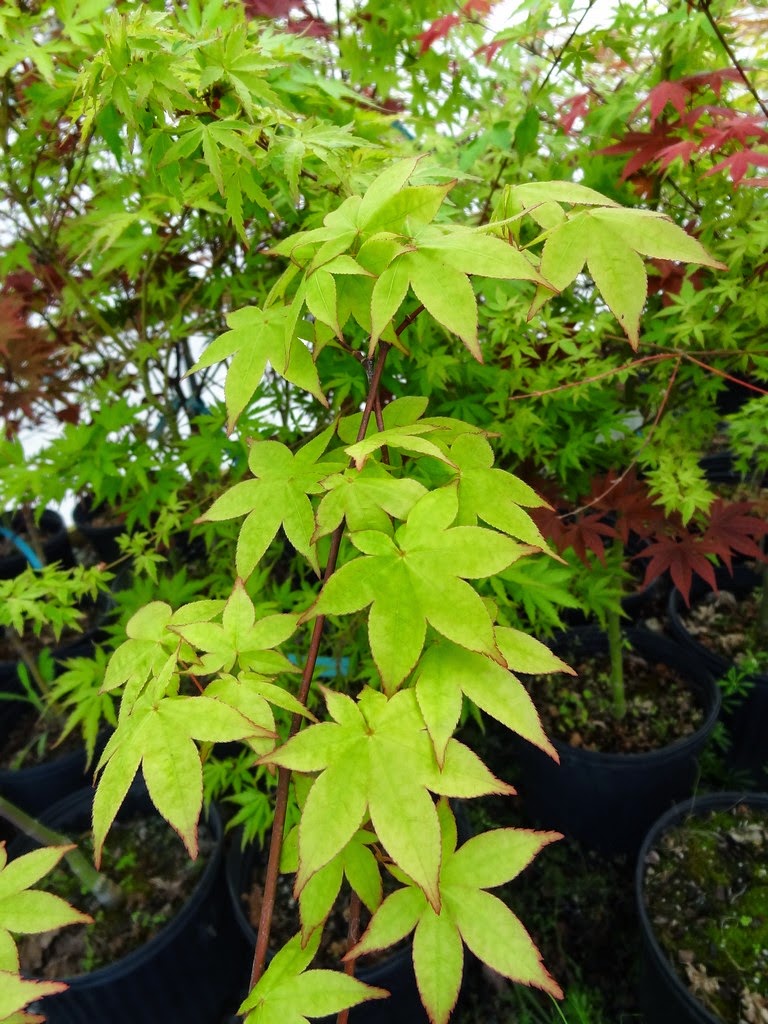 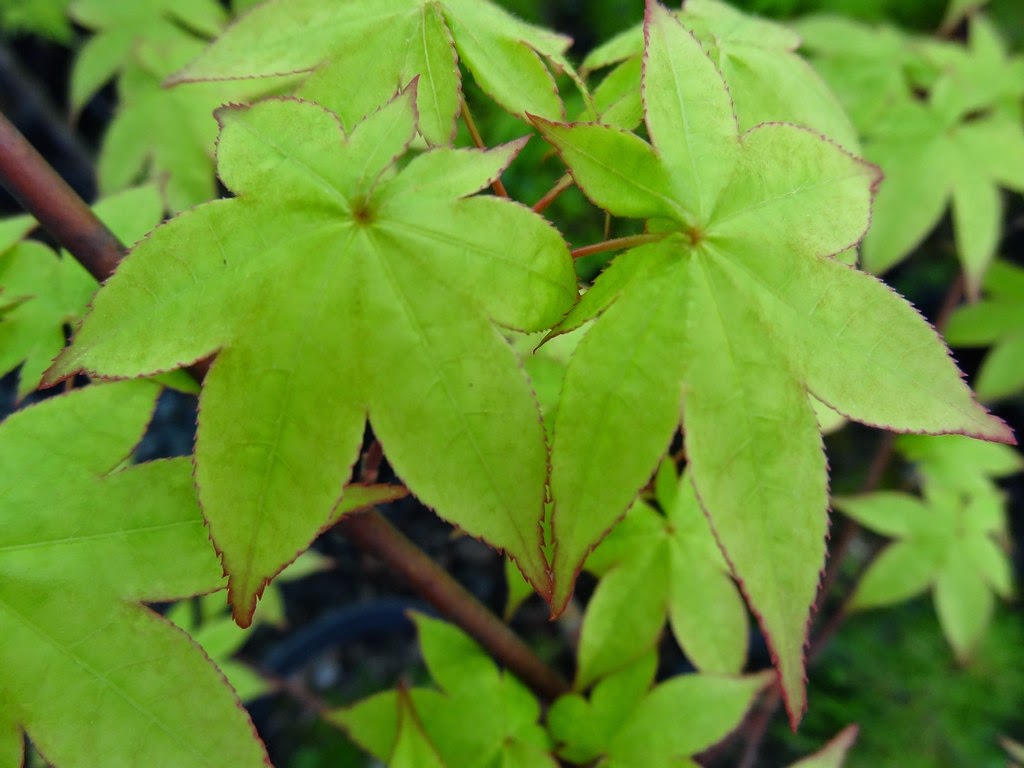 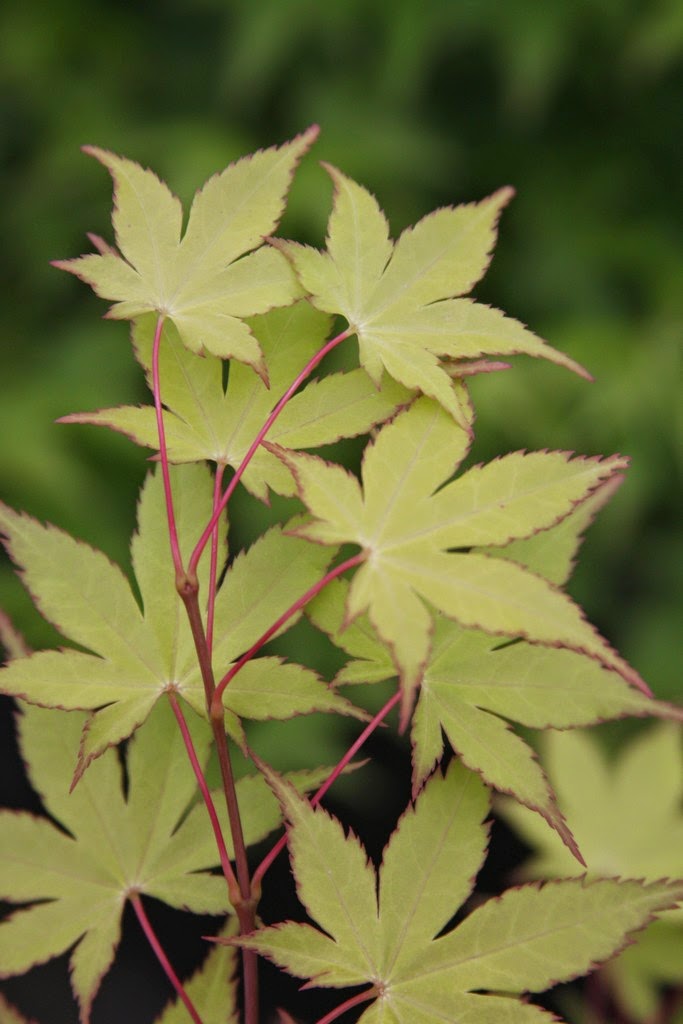 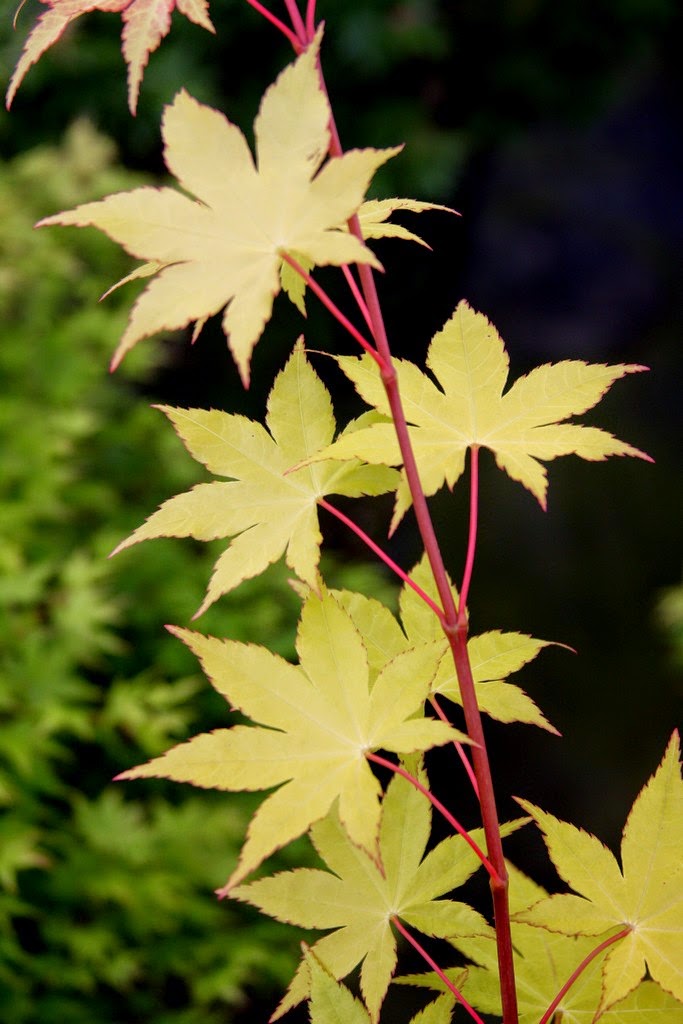 *Ok, the Acer palmatum 'Yellow Bird' I received ten years ago from an unremembered Alabama collector, but it died the first year. Now we are growing scads of Acer palmatum 'Summer Gold', and I wonder how the two compare for durability and heat tolerance.

The Nichols Boys sent a number of cultivars to me last year, ones that they consider "most cool." Unfortunately the Acer palmatum 'Uzen nishiki' was one that did not make it. It was very attractive, but I do not plead for a replacement, as I have at least one hundred variegated maples and I can live without yet another. 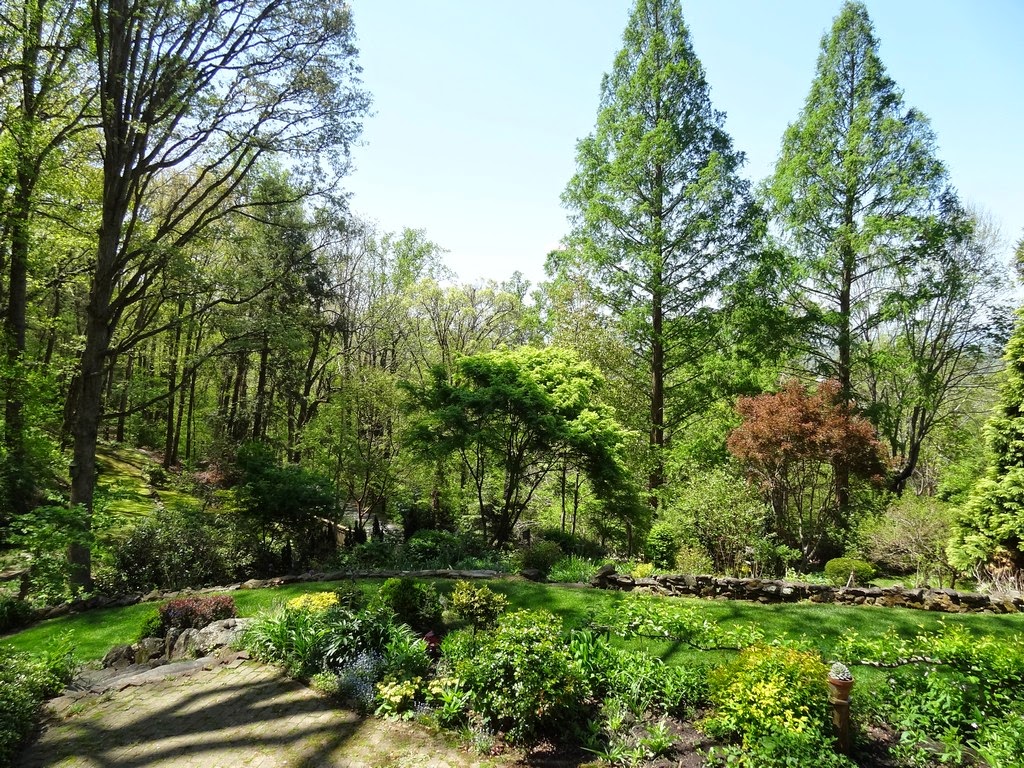 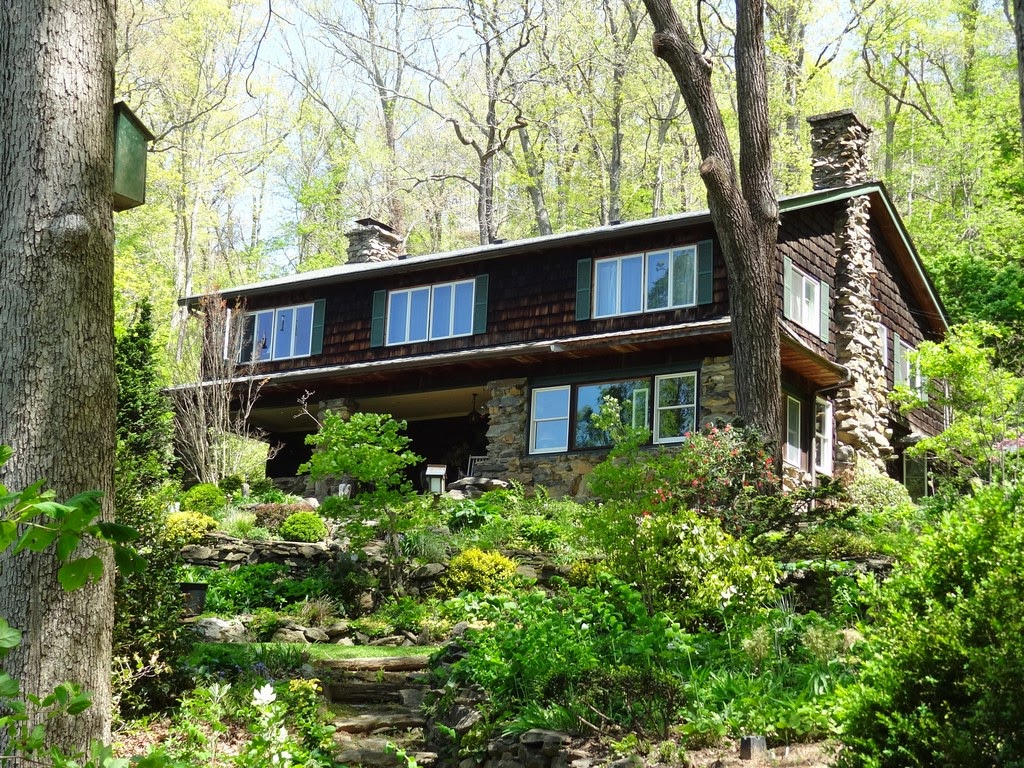 Our next stop was at Peter Gentling's Blue Briar garden in north Asheville. Strangely, no one was home, although we set the day and time in advance. The garden was pleasant, but usually the package deal of the garden and the owner makes for a more rewarding experience. We spent a little time wandering down the paths but still didn't encounter anyone. I felt uneasy to continue so we made our way back up to the car and drove off. It turned out that Dr. Gentling indeed was at home – he was off in the vegetable garden, wherever that was. 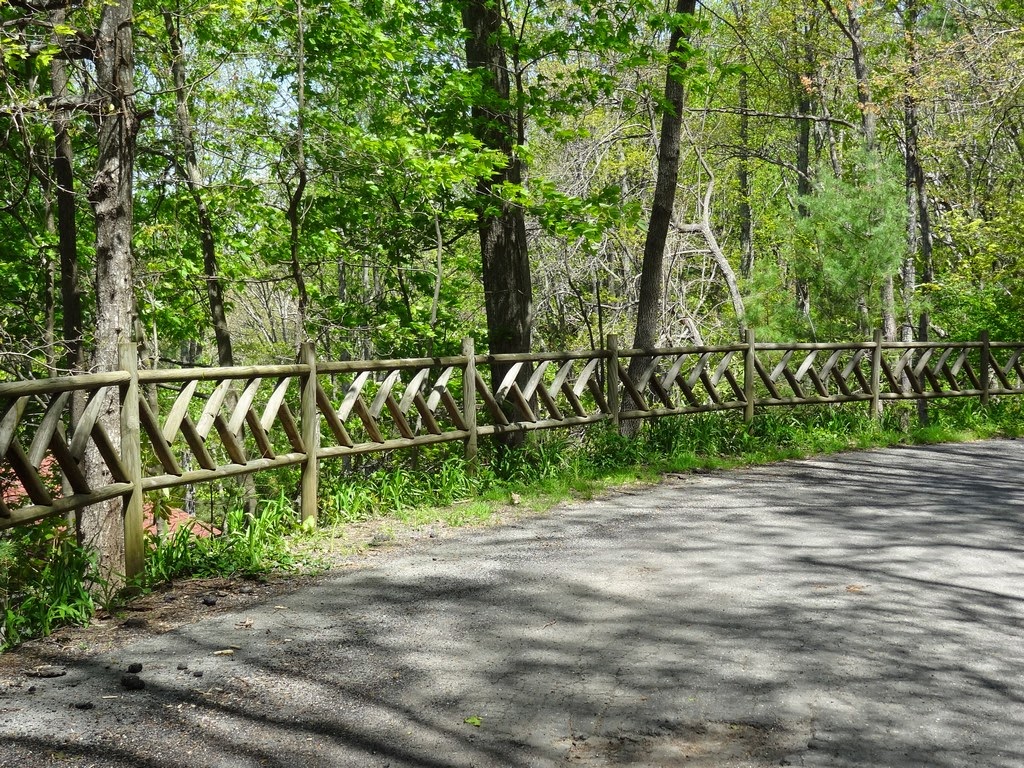 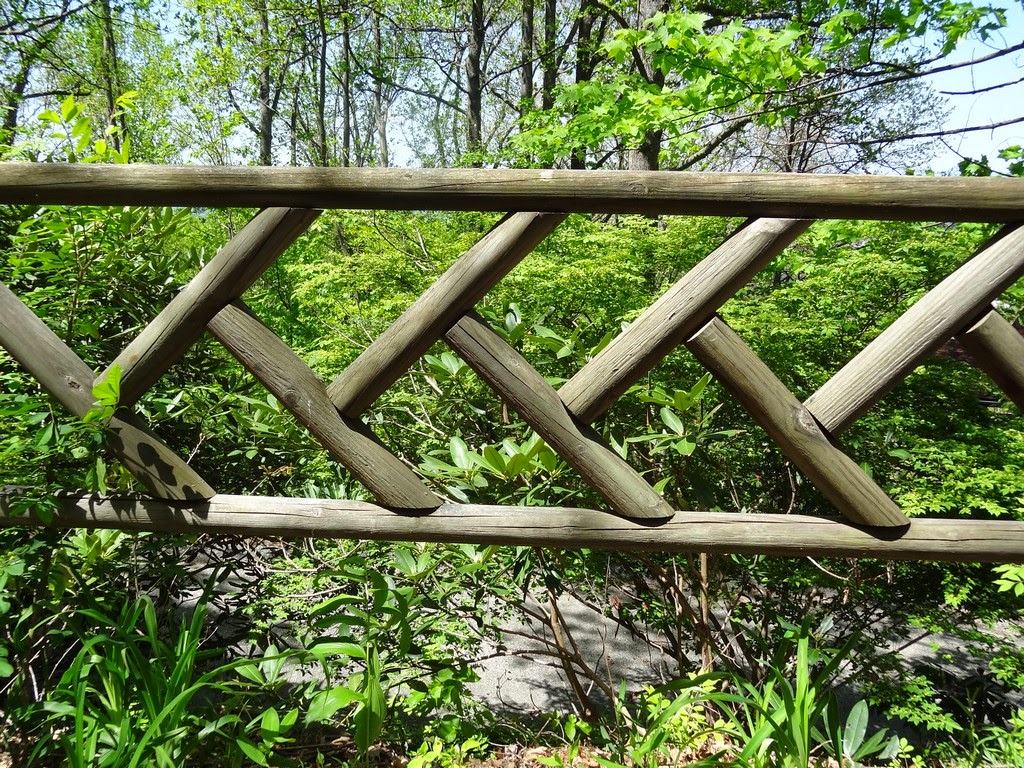 Gentling's neighbors had a most attractive fence, one that was useless except for its simple beauty, and I would love to have such a thing on my property. The route to Blue Briar is via Old Mountain Road, which becomes the famous Blue Ridge Parkway. In a few days we would explore the dazzling plants and scenery on this mountain-crest drive.


Last fall I was impressed with the Dr. John Critikos landscape, for it was on the Maple Society agenda. I couldn't take any photos this time because an energetic afternoon breeze put the trees in motion. Dr. C. lamented about the brutal winter they had endured, plus a late April frost that punished the fresh new growth. As if that wasn't enough, his woodsy garden is visited by bears. They don't just walk around and nibble at the dandelions, but rather mark their territory (I guess) by bashing a few chosen conifers into submission. And I thought that I had a tough year!

I frequently repeat how friendly the North Carolinians are. Dr. C. and his lovely wife Gerri are great examples of that, and it was one of the compelling reasons for my Carolina redux. Too bad that we are 3,000 miles apart, otherwise I would go over there and wrestle with his damn bear.

Day 2 was a drive to Hickory, North Carolina – and that was as far east as we would go. Rick Crowder would host us at Hawksridge Nursery, a rather large company, but we were able to enter some houses where the new plants were stashed. Rick's obviously a member of the cool fraternity, a good-ol'-boy network where exciting plants emerge. He also frequents Japanese nurseries and has brought many fun plants back.


Poncirus is a genus closely related to Citrus, in fact it is hardy to USDA zone 5 and is frequently used as a rootstock for Citrus trees. It is known in China as "Bitter Orange," and I too can attest that the fruits are inedible. We grow the dwarf form 'Flying Dragon', and have never had any trouble to sell them. A year or two ago Rick visited my nursery and brought two little mutants: a variegated form and a much more dwarf and contorted version of 'Flying Dragon'. I was pleased to see larger specimens of these two at Hawksridge, which I think he brought back from Japan. Also attractive was a dwarf Cryptomeria with snow-white variegation, but one wonders how it would fare in full sun.


Acer palmatum 'Cosmos' was a new find for me, though perhaps some would find the variegation rather garish. Maybe the same for 'Pink Ballerina', which I first took to be 'Hana matoi'. In my experience the variegated laceleafs can occasionally lose their colors, and I don't mean by reversion. Every spring when they leaf out, some simply do not reveal the same variegation as the year before. I bought a plant of 'Toyama nishiki' thirty years ago from J.D. Vertrees. The first season I harvested five scions from it and grafted all onto the branches a ten-foot green seedling palmatum. Four of the grafts survived, and I kept the tree for another twenty-five years. Finally I sold it to someone who was impressed that all four portions were different, that it had gone mongrel. All along I thought that was a bad thing, but I was happy when one person disagreed.

Jasminum nudiflorum is a northern Chinese native in the Oleaceae family and feature bright yellow flowers. Rick had collected a dwarf form which was dense and compact, but I guess so far it does not have a name. Another showy plant was Eurya japonica 'Variegata'. I had never seen the genus before, but it is an ornamental plant in the Theaceae family, as are Camellia and Stewartia. I don't know if Rick's variegated version is male or female; if female the tiny greenish-white flowers would be followed by black berries. The leaves of Eurya are quite dark – except for on this variegated cultivar – and in Japanese magma the meaning of the word eurya is "dark," and some highly-disturbing stories are associated with dark-blood characters. 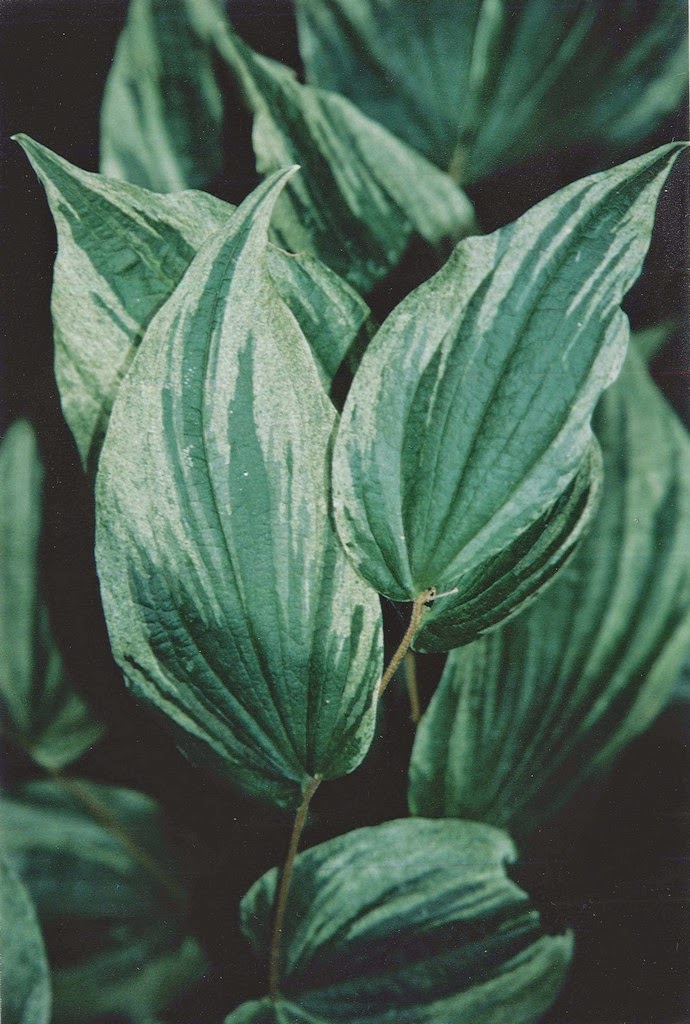 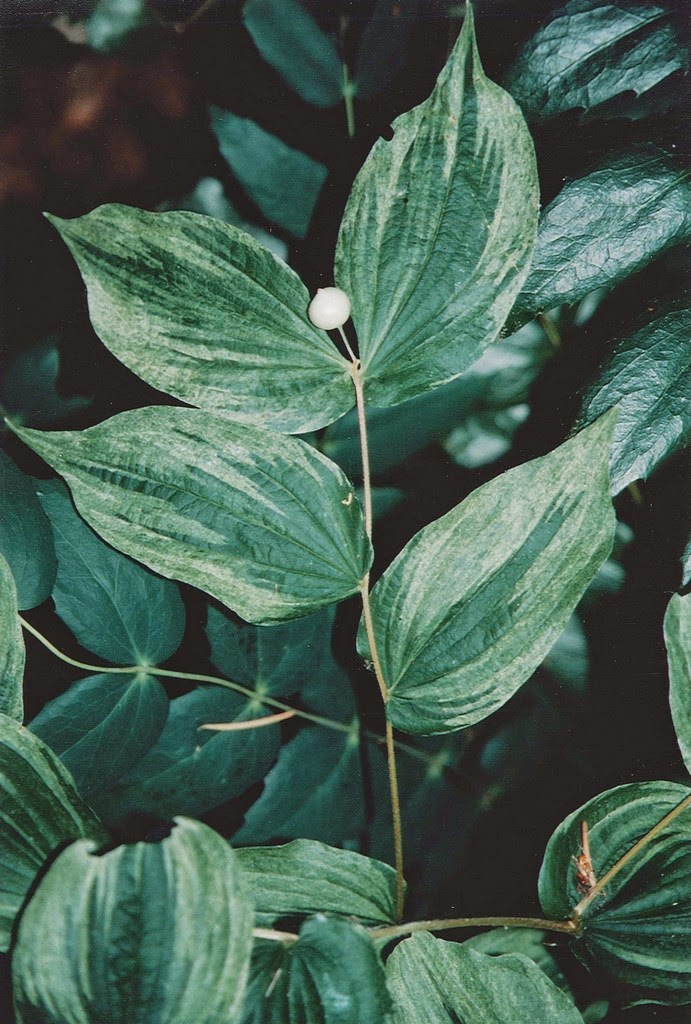 Next Rick showed us a beautiful Disporum, sessile 'Awa no tsuki'. Disporum is an herbaceous perennial commonly called "Fairy Bells" for its pretty drooping flowers. The genus name comes from the Greek word dis meaning "two" and spora meaning "seed," which describes the ovaries containing two seeds in each chamber. The species name sessile refers to the fact that the leaves are attached to the base without a stalk. We grow a Chinese species, Disporum cantoniense, and the cultivar 'Night Heron' features delicious chocolate foliage. About ten years ago I discovered a variegated Disporum while hiking in the Columbia River Gorge, and while I obtained photos of it, I was unsuccessful to propagate it. But...I can show you exactly where it is along the trail up to Table Mountain on the Washington side of the Gorge. 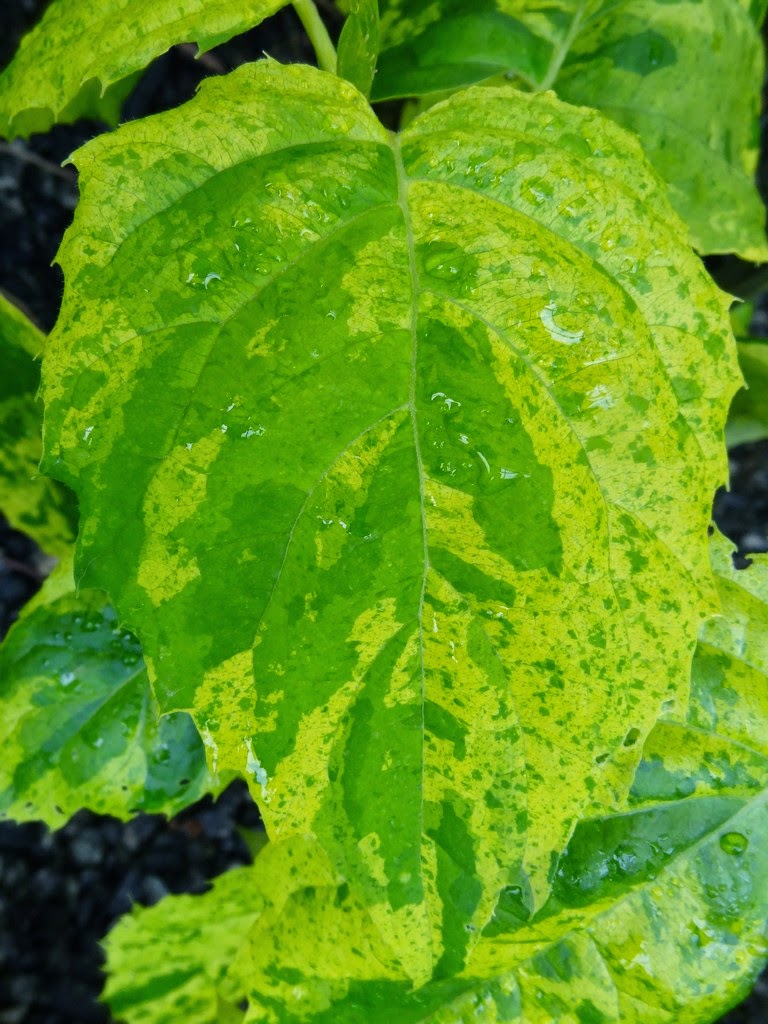 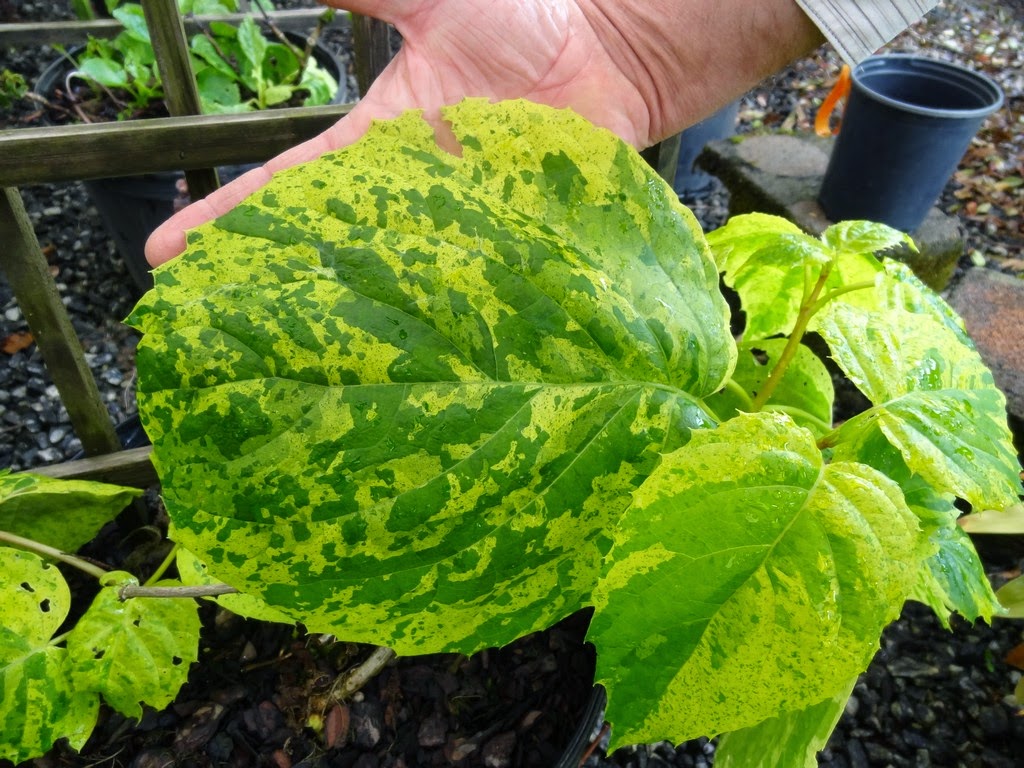 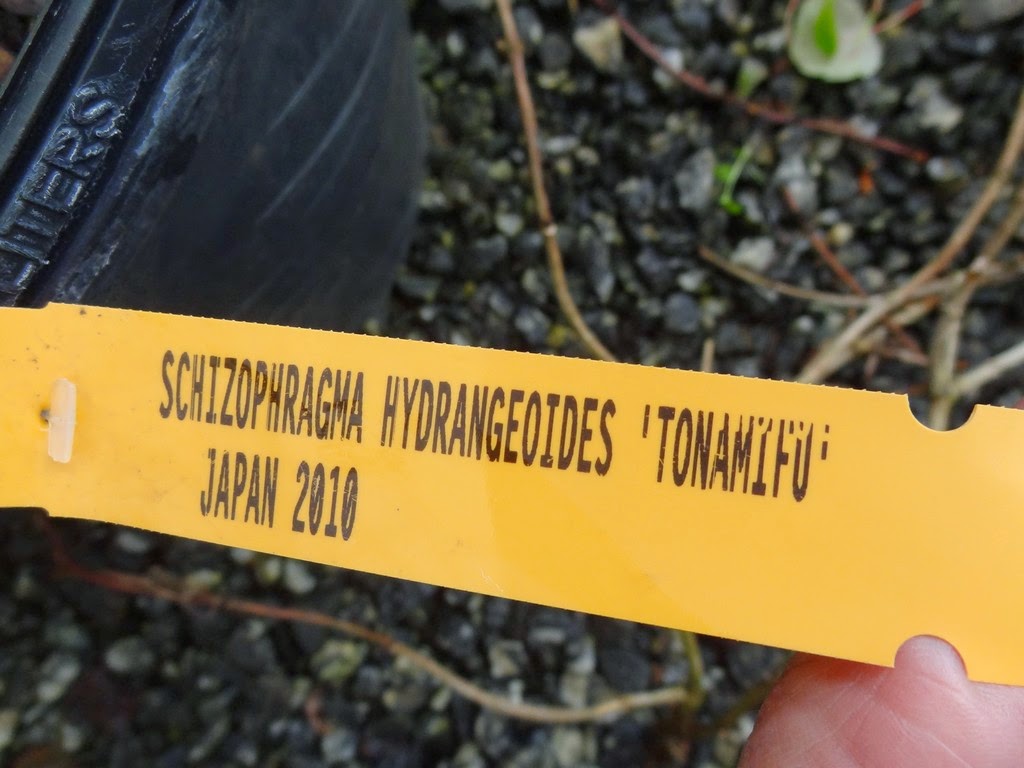 Rick obtained a splashy variegated plant in Japan in 2010, Schizophragma hydrangeoides 'Tonamifu', and you can see from his label how he keeps track of the origin of his new plants – a system that I should have adopted long ago myself. The genus name is applied to a group of climbing vines with hydrangea-like flowers, and is derived from Greek skhizein meaning to "split," and phragma, from Greek phrassein to "fence" or "enclose." The genus name Schizophragma is quite a mouthful, and I don't think it is a name that endears itself to the gardening public. What a shame that previous-centuries' botanists saddled plants with such names, and I don't have a clue what "to split" and then "to enclose" is referring to. 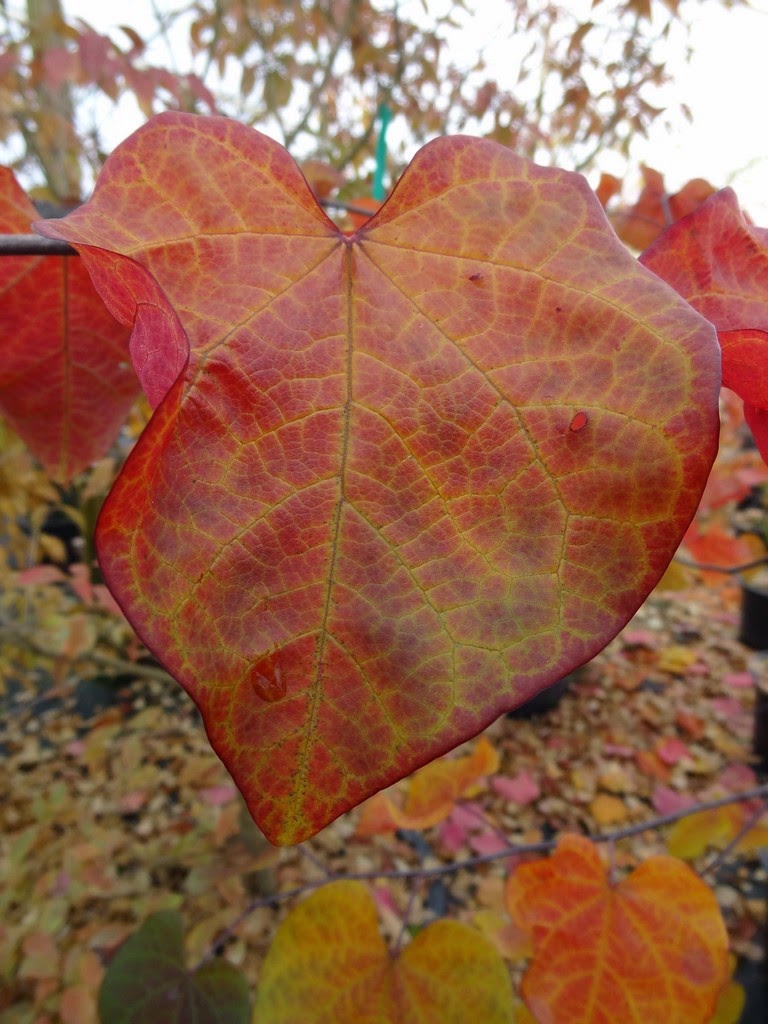 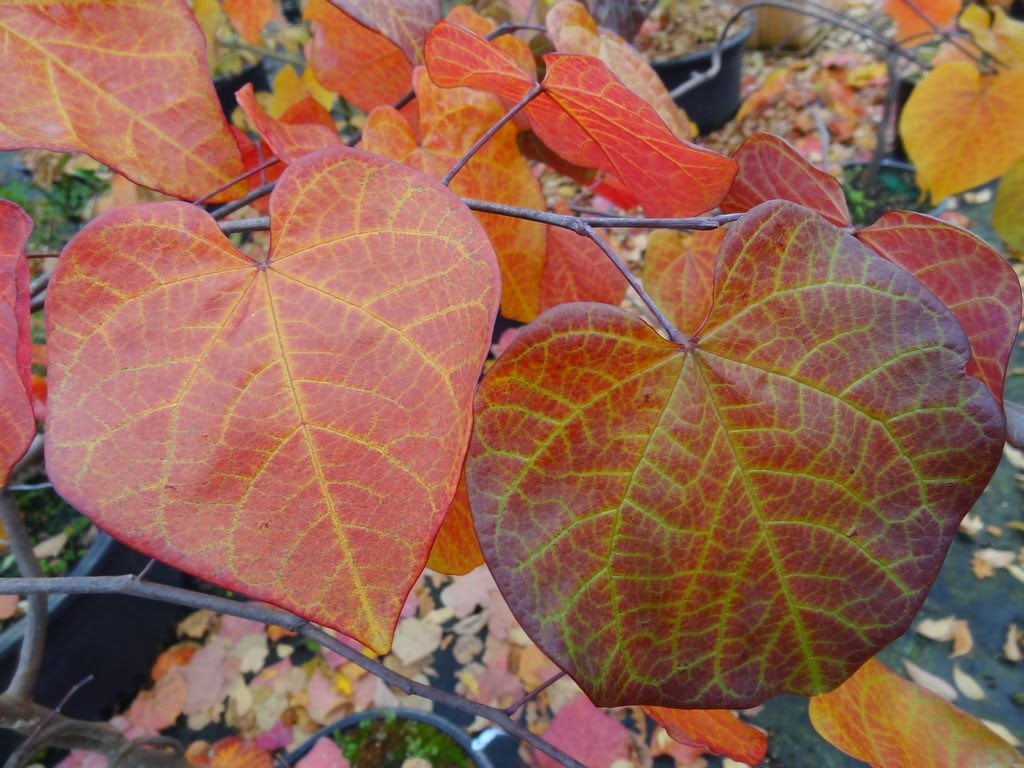 
Cercis canadensis is a small to medium-sized tree with pretty round leaves and (usually) small reddish bud-like flowers which appear precociously (i.e. before the leaves), hence the common name "Redbud." The species is native to eastern USA, from Ontario, Canada to Florida, and it is the state tree of Oklahoma. Cultivars can be weeping, as in 'Ruby Falls' or 'Lavender Twist', or upright such as 'Forest Pansy' and 'Appalachia'. I was excited to see some new selections, or at least they were new to me. One selection was curiously variegated, and Rick pointed it out but I can't remember the name. Later in our trip in Tennessee we saw other new redbud cultivars, as they are quite popular in the southeast.

A couple of plants of Osmanthus heterophyllus 'Party Lights' were most noticeable in front of the office. They looked great but the cultivar is trademarked, which means little companies such as Buchholz Nursery will never be able to propagate it. Most of the Hawksridge plants are deciduous or evergreen shrubs such as Osmanthus, so Rick is licensed to grow the stuff. I was surprised how few Japanese maples and conifers he grew, unless they were being housed in another location. 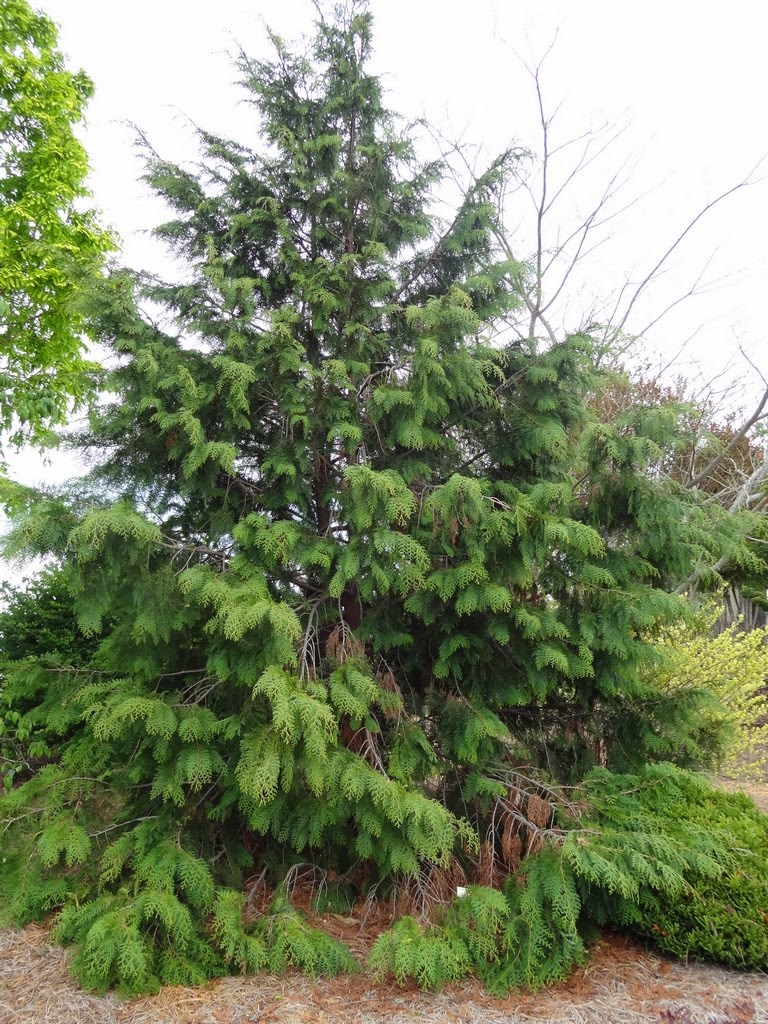 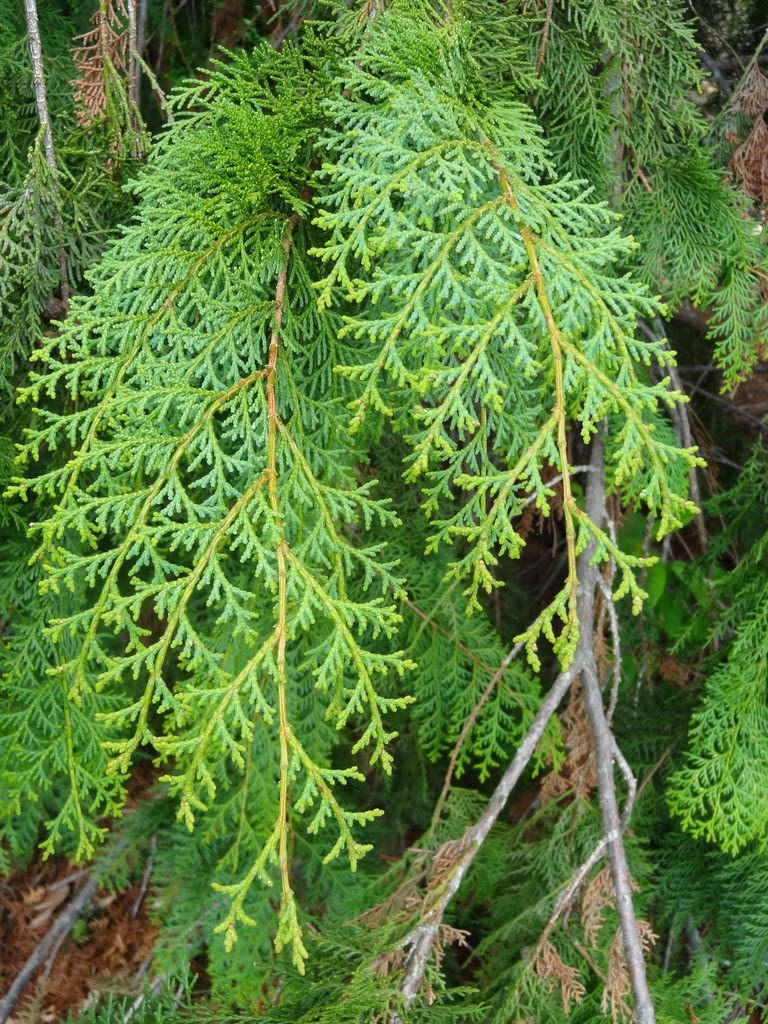 A final plant that I'll mention, completely new to me, was Chamaecyparis thyoides 'Quiana', also planted in front of the office. I didn't see any smaller ones in production, but I thought it was very attractive, like a weeping lacy "Lawson Cypress," Chamaecyparis lawsoniana. The word chamaecyparis is an odd name. It is derived from Greek chamai for "low to the ground," and cyparis, originating from Greek kyparissos for "cypress." Apparently the thyoides epitaph is no longer hoyle and it has been changed to sphaeroidea, but I have never encountered the new designation in any nursery. In a medical term, articulation sphaeroidea refers to a spherical joint where the opposing surfaces are spherical. I don't know how this relates to our Chamaecyparis, although its seed capsules (cones) are round. 'Quiana' is a pretty name and is supposedly of Hawaiian origin, meaning "divine" or "heavenly."

So, two days gone and we'll head next into Tennessee. Seth is holding up so far.
Posted by Talon Buchholz at 3:44 PM