Posting a blog is by definition an act of arrogance, as if the blogger has something worthy to say. And you, you could be better off tending to your family and livelihood instead. If all is well and secure, then perhaps you can squander some time with me. Be sure, I appreciate all of the positive feedback. If the feedback is negative, then knock it off.

I have also been accused of "ranting" on the blog. But I am far from being a rantipole, as I don't really speak or disclaim extravagantly or violently, or talk in a wild or vehement way. Historically, the Ranters were an outrageous religious sect in England around the 1600's. They were accused of wild debauchery, including nudism and adultery. However, the Ranters were mainly known through the writing of their opponents, and they may not have really existed at all. The word rant is derived from German rantzen, meaning "to frolic." I cringe to imagine the Pilgrims frolicking in the nude, just speaking for myself.

Ok, I promise not to rant or to say anything outrageous, and I am writing this while fully dressed. In fact, I will be close to boring, for today's blog will be about the less popular Japanese maple cultivars, those that are nobody's favorite. These are the plain-janes, the ones that we sell just a few of each year. But every serious maple collection contains them, and if allowed to mature, they can grow into attractive specimens. Young cheerleaders don't always grow into beautiful adult women, but many young unsungs can turn out to be highly esteemed. We are finishing up on Japanese maple propagation this month, and we've grafted at least twenty five of each of the following. 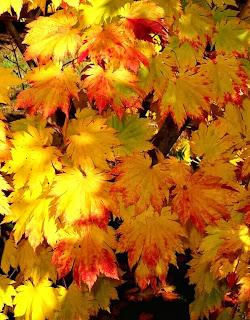 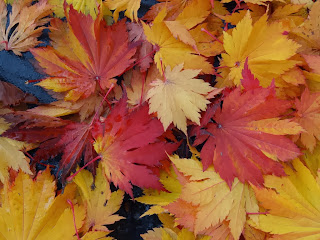 Acer japonicum 'O taki' is a small to medium-size tree with stout branching and a wide canopy. Large flowers (for a maple) and fresh new growth, reddish changing to light green, greets the observer in spring. By summer the foliage evolves to deep green; then the best excitement arrives in fall with wild coloration of yellow, orange and red, often at the same time. I very much like 'O taki', but apparently Buchholz customers do not, which is too bad. I guess  it doesn't have enough razzle-dazzle in spring, but it more than makes up for it in autumn. I confess to not knowing why the cultivar was named 'O taki', or "large waterfall" in Japanese. Maybe after a good rain the large wet leaves, perhaps moving in the wind, evoked a kind of waterfall image. 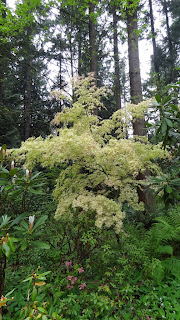 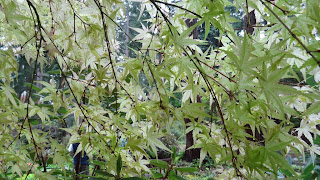 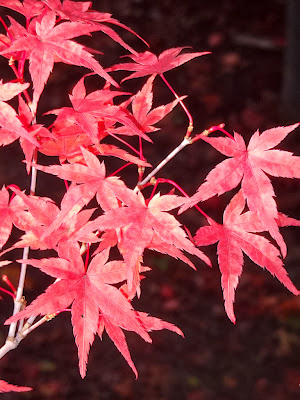 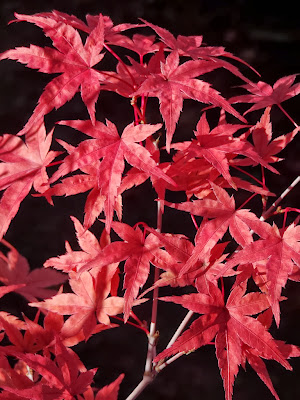 Acer palmatum 'Beni tsukasa' never sells very well either, but all of us can admire a mature specimen. The "Beni" in the name refers to the reddish spring new growth. Green coloration follows for summer, then riotous red occurs in autumn. All of that can be different if 'Beni tsukasa' is grown in shade, as I witnessed this past spring at the Rhododendron Species Garden, where the foliage was ghostly white. That specimen was healthy, but not thriving, maybe from root competition with the surrounding flora. I could not immediately identify the cultivar, but I scrambled into the brush and successfully found a label...to my delight. 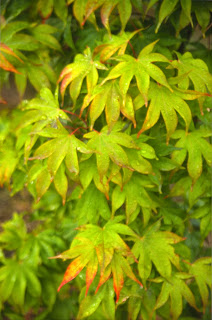 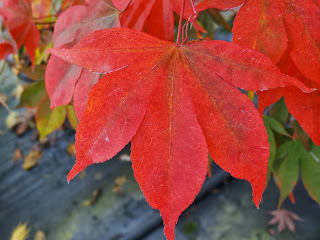 Acer palmatum 'Elegans' is over-named in my opinion, at least in spring and summer, for it looks like palmatum rootstock frankly. Leaves are yellow-green in spring, changing to deeper green by summer. 'Elegans' forms a broad canopy, like most seedling palmatums do. But be patient, for you will be bowled over in fall with outstanding oranges and reds, and it becomes clear that it is deserving of its elegant name. Acer palmatum 'Kokyo' performs the same in fall, although with a different leaf shape. My start of 'Kokyo' came from the famous Jane Platt garden in Portland, Oregon. As the story goes, Mrs. Platt's sister was touring the Imperial estate (called Kokyo) in fall in Tokyo, and helped herself to seed from one flaming red tree. I was allowed to propagated from Mrs. Platt's tree, and took the liberty to apply the name 'Kokyo'. That was presumptuous of me, of course, but in my defense I had to call it something, at least temporarily to keep track of it. Time goes by, and eventually I sold or gave a few away, so the name is out there forever. The late Mrs. Platt had no idea that I was such an entrepreneur, such a capitalist. 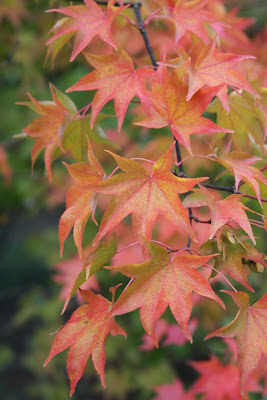 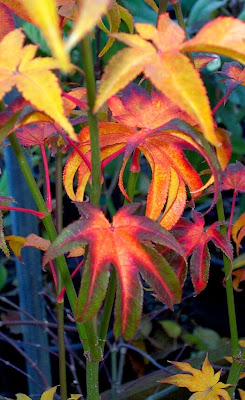 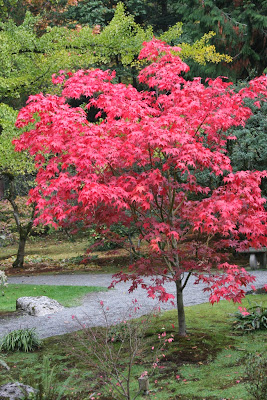 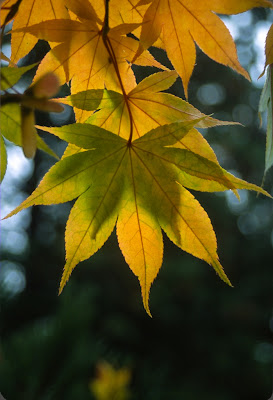 Acer palmatum 'Hogyoku' is a favorite of mine, but yet again you are not so enamored. I don't understand it though, because it is a sturdy green tree with leaves and stems easily identifiable. Fall color is pumpkin orange, usually, but sometimes can be straw yellow. The name translates as "a jewel" in Japanese. Acer palmatum 'Osakazuki' is similar, but its green leaves turn to brilliant red in autumn. Due to a slight cupping of the leaves, the Japanese name translates to "leaf like a sake cup." Strangely, 'Osakazuki' used to be quite popular at the beginning of my career, and I don't know why it has fallen out of favor. Sadly a large southern hemisphere company has exported thousands of a wrong clone throughout America and Europe, thus polluting the correct cultivar. Their "version" is also a nice maple, but it is not true 'Osakazuki'. What galls me is that they refuse to acknowledge their error, and continue to propagate and sell the incorrect clone, when the correct cultivar could easily be acquired. There's bad capitalism for you. But I promised not to rant; and I am still fully clothed. 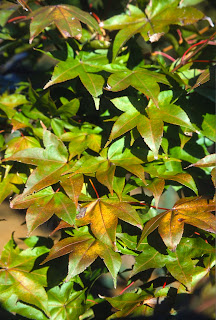 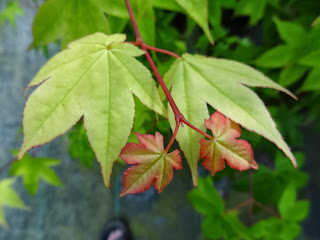 Acer palmatum 'Mon zukushi' is just a little different from those mentioned above, but still distinct enough to be readily identifiable. The tree is stocky, even muscular, and will eventually form a wide canopy. New growth is reddish, but quickly evolves to solid green by early summer. Fall color is strong orange to red. 'Mon zukushi' is a great cultivar name, for it means "one of the sacred treasures" in Japanese. 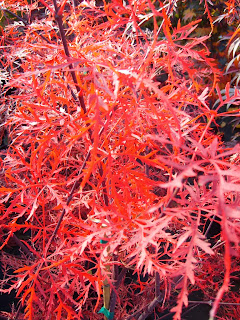 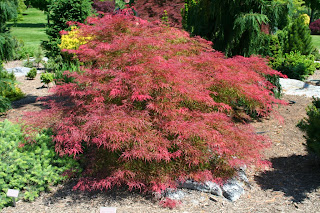 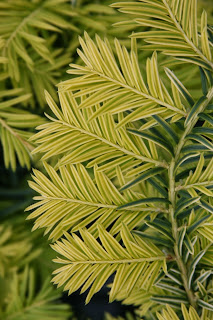 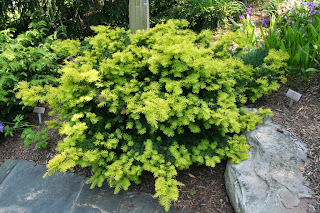 A "sacred treasure" is certainly a better name than Acer palmatum 'Baldsmith', but 'Baldsmith' is a nice selection nevertheless. I don't know the origin of the cultivar name, or whether or not Mr. Smith had any hair. The tree forms a mounding laceleaf, with very dissected orange-red leaves. To some, it is a nice alternative to the ubiquitous purple-red dissectums, but we never sell very many. Perhaps if customers could see a nice specimen in autumn, they would be won over. Acer palmatum 'Watnong' is similar in sales and appearance to 'Baldsmith', with an equally crappy name. There was nothing ever crappy about the introducers; it was the Smiths from New Jersey at Watnong Nursery. The Smiths introduced a number of excellent plants, such as Sequoiadendron giganteum 'Hazel Smith', Taxus baccata 'Watnong Gold' and Tsuga canadensis 'Watnong Star'. Back to maples, 'Watnong' and 'Baldsmith', those two of which we sell very little, resemble the cultivar 'Chantilly Lace'. For some reason we can sell scads of 'Chantilly Lace', though I can't see what is superior. Do people fall for the name? 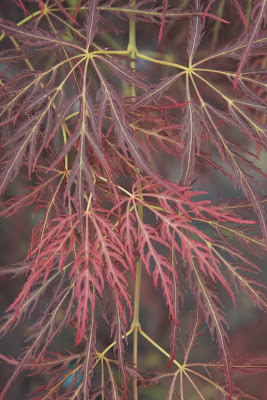 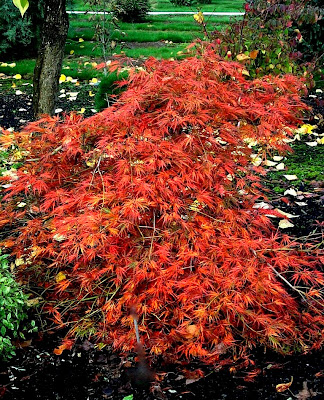 
You don't want to grow too many Acer palmatum 'Van den Akker' either, even though it is another attractive laceleaf. It differs from those in the paragraph above with more dark bronze-purple foliage, leaves which green somewhat in hot summer. But it is "different" as well, and I wouldn't be without it. 'Van den Akker' was selected by a Washington state landscaper from the northwest tip of the state which is populated by many of Dutch origin. He was better known for his outstanding introduction of Chamaecyparis nootkatensis 'Van den Akker', one of the most choice of any conifer for the landscape. Sadly, the photo of the maple cultivar in the Vertrees/Gregory 4th edition of Japanese Maples (page 362) is not correct, and I have no idea what that tree is.

If I had to divest myself of all Acer palmatum 'Samidare', in the interest of simplification, it wouldn't kill me; but I sure don't want to. It is yet another green cultivar, sturdy like many others I have described, but it too has its unique qualities. Leaves are large and broad, and appear light pink in early spring, then turn to green in summer. Fall color is purple, but often with gold and red mixed in. Its name means "early spring rain" in Japanese, but for reasons that I cannot fathom. 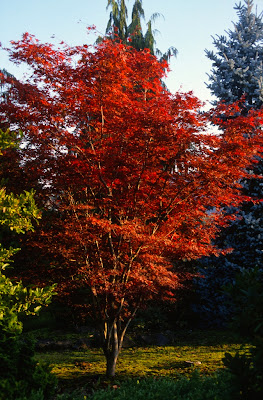 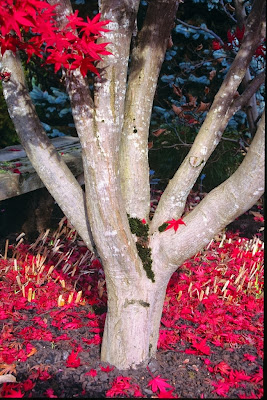 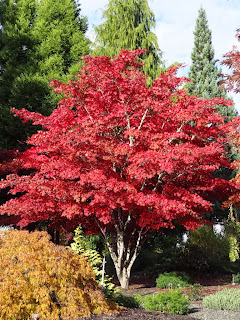 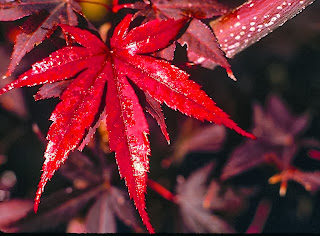 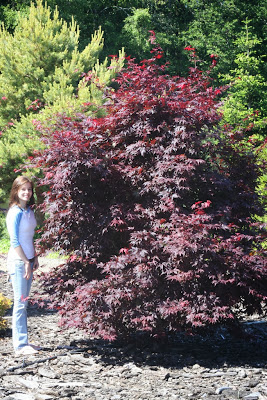 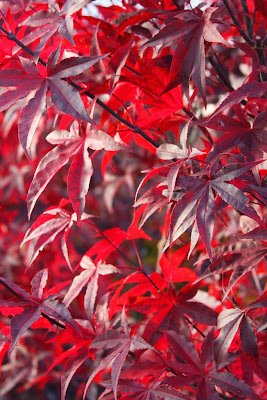 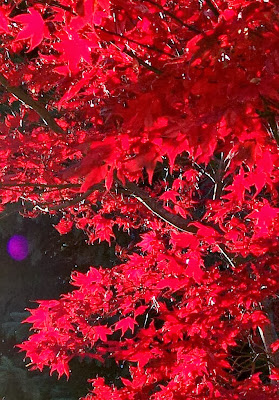 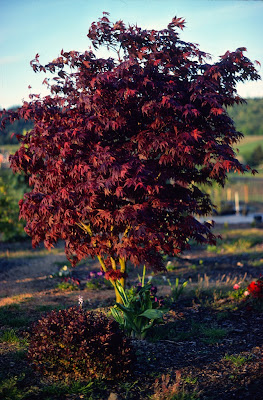 Acer palmatum 'Shojo nomura' is another cultivar that has fallen out of favor. The photos above will hopefully cause you to ask why. The same is true with Acer palmatum 'Nuresagi', which I can't tell apart without their labels. Both are purple-red uprights. Both were once popular, but they have been surpassed (though not necessarily in quality) by Acer palmatum 'Red Emperor'. We still grow a few 'Bloodgood', but only one percent as many as in our heyday. The 'Bloodgood' decline for us was due to a serious glut in the market, where every nursery amped up production to an obscene level. Though the quality is generally poor, you can now purchase a full 'Bloodgood' at seven feet tall at the box stores for $35.00. Frequently they are sloppy balled and burlapped trees with plastic orange twine (that will eventually girdle the tree), slammed into five gallon pots. On the first hot day the trees will burn for lack of water, and no more will sell; and the grower won't get paid, hard feelings will ensue, but the Box always wins, and the dumb-ass grower will be replaced by yet another dumb-ass. I'm not ranting because I'm not in that game. Interestingly, we could barely sell our 'Bloodgoods' from 2009 to 2011, but in 2012 we totally sold out. Now we have very few coming along, while there could possibly be a significant shortage for the future.

All of the maples discussed have their qualities, whether or not anyone ever buys them anymore. And I should admit that even if I can't sell many, perhaps someone else can. I just give you my rant...er, experience. For me, these maples are friends; not best friends, but still good friends. And as long as I'm allowed to keep my land and grow my trees, they will all remain part of Buchholz Nursery, part of my Flora Wonder.