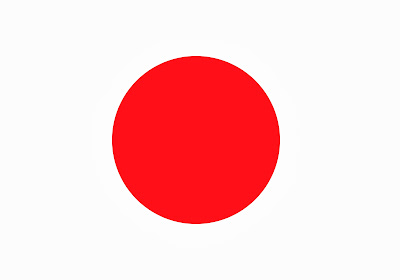 I try not to be a plant snob, but when you've had a long career you learn a lot of Latin, and in my case, a lot of Japanese. You can toss the names around effortlessly, and your non-plant acquaintances suppose that you are showing off, or that you really are some sort of plant genus...er, genius. Mastering Japanese plant names is largely due to my wife, as Japanese is the spoken language in our home, for all except me and the dog. Add to that the telephone conversations Haruko has with her friends, where they can chirp away for hours.

I like the spoken Japanese language, and the translated-into-English plant names are spelled simply and exactly how they sound – there are no spelling tricks like we have in English. You can easily sense when something is incorrect, when it just doesn't look like Japanese. Other times it might sound legitimate, as in Tani mano uki for a variegated pine. I'll repeat the story, that one evening BC (Before Children) my wife and I were walking through the Display Garden, and she commented on how beautiful the pine was. I asked her what the name meant, testing her I guess, for I already knew it was "snow on the mountain." She replied "hmm," gravely, and I could tell there would be complicated trouble about my simple question. I feared that her brow would be eternally furrowed, so I butted in and said that it meant "snow on the mountain," right? "Hmm, no, hmm, actually these are not Japanese words." How annoying! Geeze, it's tough enough to be around any woman, let alone a wishy-washy Oriental. I had been frustrated before, frequently, because there never seems to be a clear answer for anything. The pine had been around for quite some time, so obviously the "world of horticulture" knew more than my sweet simple wifey. But Haruko would not drop the challenge, and she eventually solved the puzzle. Tani mano should be Tanima, and no, a separate word, means "of" in Japanese. And uki is not a Japanese word, but yuki means "snow." And Tanima means "valley," not "mountain." So, finally she declared that Tanima no yuki was correct, not the long-used Tani mano uki, and that "snow in the valley" was the correct translation. So much for the world of horticulture, for it turns out that Haruko was correct, and as I have discovered ever since, she always is. She also revealed that Tanima, the "valley," is crudely used by Japanese men to refer to a woman's cleavage. There you have it. 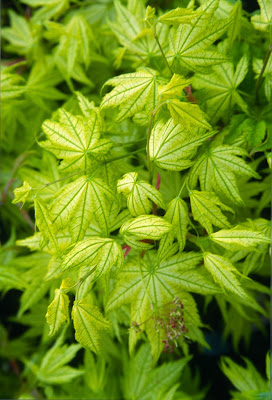 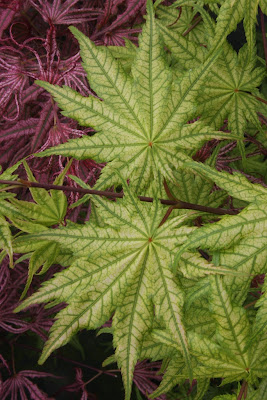 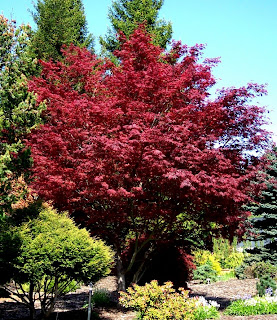 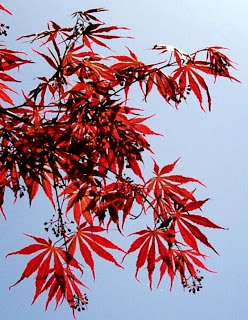 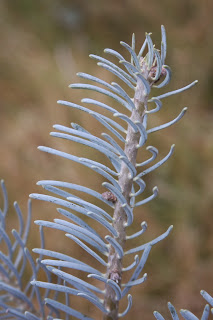 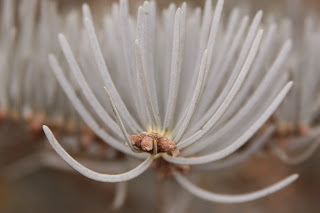 I suppose that the Japanese plant name which amuses me the most is 'Shigitatsu sawa', for it means "snipe rising from a winter swamp." I've looked at this Japanese maple many times, and it is a very pretty cultivar, but I just can't picture the rising snipe. 'Shigitatsu sawa' has existed since the 1700's, but in Japan the lobes are more deeply cut than those grown in America. To add to the confusion, 'Shigitatsu sawa' can also refer to a Japanese place, and many other cultivars also refer to a place. Place-named plants also occur in America, as in Acer palmatum 'Sherwood Flame', as Sherwood, Oregon is the place where it was selected. Abies concolor 'Sherwood Blue', however, was named by Andy Sherwood, a noted Oregon plantsman, about sixty years ago.

Buchholz Nursery selected a maple seedling about fifteen years ago, and we watched it for many years. At nearly the same time I was in Holland and I saw a selection at Vergeldt Nursery. The leaves featured rolled red lobes – say that three times fast! – and I suggested that he could name it "Starfish." I totally forgot about that incident, because a few years later I named my green selection 'Hitode', Japanese for starfish, and my wife was naturally involved in the naming. Later, when I saw 'Starfish', or 'Peve Starfish', I remarked that I had a green selection of the same name, only in Japanese, but it might lead to some confusion. Then Mr. Vergeldt reminded me that I was the one who had suggested his plant's name. So, I remember millions of things, but I apparently forget billions. 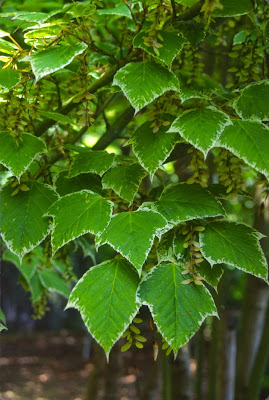 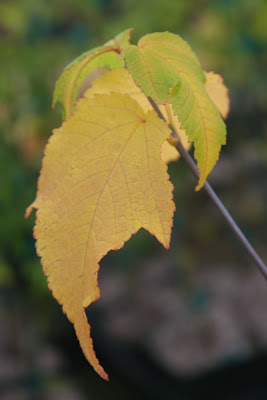 We grow a variegated cultivar of the "Redvein Maple," Acer rufinerve 'Hatsuyuki', which probably should be two separate words, hatsu meaning "springtime" or "first," and "yuki" meaning "snow." As you can see from the photos above, a dusting of snow is apparent. "Yuki" is also a Japanese girl's name, and I imagine that all Yuki girls are cute. But my Japanese intern is also named "Yuki," where the "u" is more drawn out, as in Yuuuki. To me, he's not so cute, but my two daughters sure think he is. By the way, the species name rufinerve is derived from Latin rufus, meaning "russet red," due to the color of the hair on the leaves, flowers and fruits. "Hatsuyuki" is a pleasant name, much better than the western rendition of 'Albolimbatum', and yes, they are the same plant. 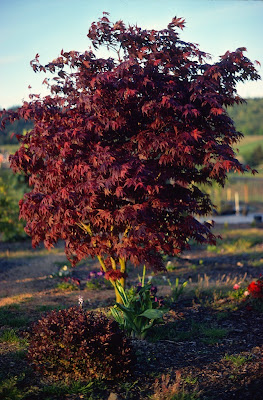 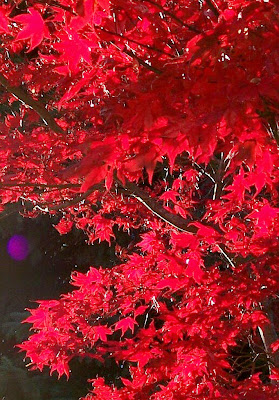 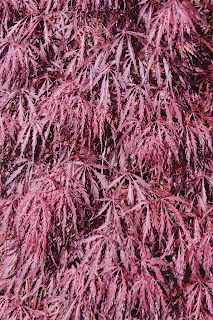 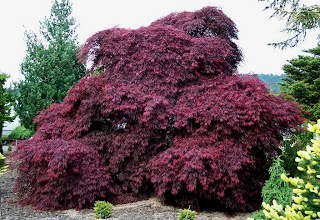 Acer shirasawanum 'Johin' is a Buchholz introduction, as my wife remarked how elegant the original seedling looked. I'm especially fond of the plum-red foliage color, as I have grown weary, after a long career in horticulture, of the deep purple-reds of 'Bloodgood', 'Tamuke yama' etc. Peter Gregory in Japanese Maples on page 321, claims that "the nine-lobed leaves are very similar to those of the well-known 'Trompenburg'..." I don't agree, and look for yourself at the photos above. It's interesting that some plantsmen speculate that 'Trompenburg' has shirasawanum blood in it, and point to the erect seed as proof. The 'Trompenburg' seedling was first raised by van Hoey Smith at the Arboretum Trompenburg in Rotterdam. He gave it to the DeBelders of Arboretum Kalmthout in Belgium, because maples wouldn't prosper at Trompenburg due to soil disease. Eventually it was introduced to the trade by Firma Esveld in Boskoop, Holland. Back to 'Johin', I think the leaves of this elegant selection look particularly attractive in Haruko's hand, and I remember that the day of the photo was the same day that the cultivar name was coined. 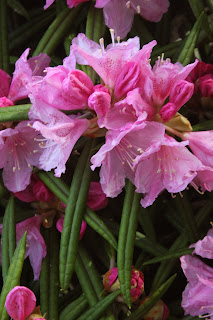 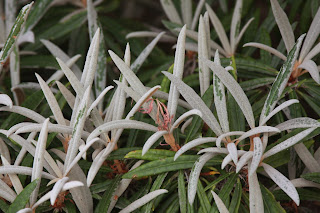 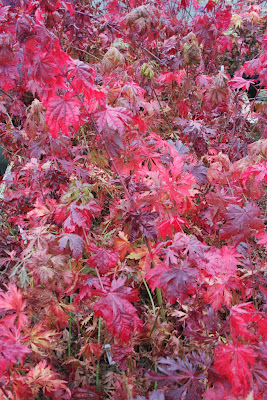 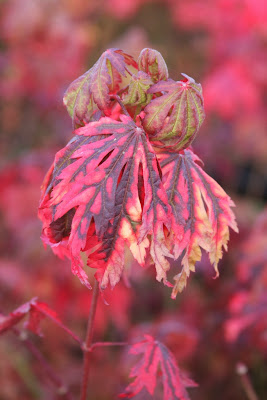 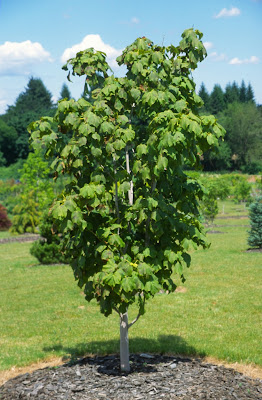 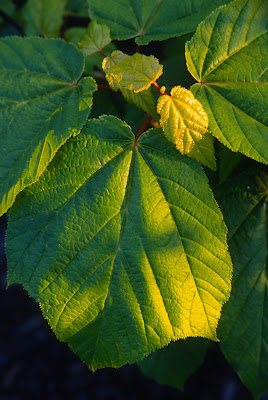 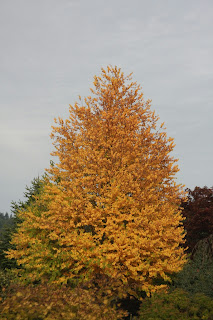 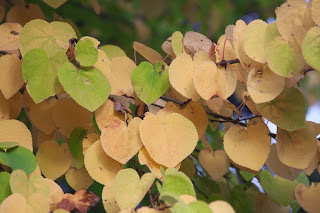 
Of course, sometimes it is the species name that is of Japanese origin, such as in Acer shirasawanum which honors the Japanese botanist Yasuyoshi Shirasawa (1868-1947). He worked along with Tomitaro Makino, considered the "Father of Japanese Botany," at the University of Tokyo, who is honored with the Rhododendron species makinoi, one of my favorites. Or, the Japanese species name can simply refer to the fact that the plant is endemic to Japan, as with Acer japonicum and Acer nipponicum. There are numerous japonica species names, such as Callicarpa japonica, Cercidiphyllum japonicum, Cryptomeria japonica, Euscaphis japonica and more.


It's a shame, considering Japan's floral wealth, that there are no genus names that honor Japan, but that's the fault of the Eurocentric botanists, beginning most notably with the cad Linnaeus. We do have Hakonechloa, however, which is a place in Japan renowned for hot springs and great natural beauty, and especially for fantastic views of nearby Mt. Fuji, or Fujisan, as the Japanese people refer to their revered dome. Hakonechloa macra 'Aureola' is a sweetheart, and is strikingly beautiful when given some shade. Even better is when you have a beautiful girl sitting next to it. 'Beni kaze' is another selection of the "Japanese Forest Grass," and its name translates as "red wind." A summer breeze surely sets the blades in motion, and a large patch of 'Beni kaze' can make you dizzy with delight, or at least it does with me. 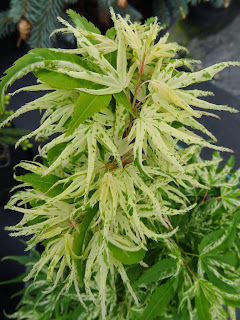 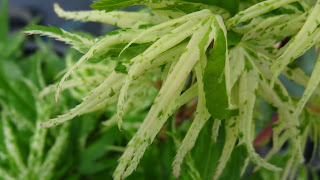 I thought it was a good idea to name a plant for Japan, and did so with Acer palmatum 'Japanese Princess'. It is probably our most sought after of all cultivars, and while I have sold or given away a few, I am required to guard them closely in order to build up enough for scionwood. It originated as a seedling from 'Mikawa yatsubusa', but grows more slowly than the parent. We annually raise hundreds of seedlings from 'Mikawa yatsubusa', for our old tree is still quite fertile, and I wonder if one day I might discover a totally red offspring. About 25% of the seedlings are 'Mikawa'-look-alikes in terms of growth habit. At year two, these are sorted out, and the other 75% are used as rootstock. Of the 'Mikawa'-types, by year three or four you can see subtle foliage coloration differences, for they are all unique individuals. Some won't be so subtle, like 'Japanese Princess', which certainly stood out from the crowd. I don't know the origin, whether as seedling or a branch mutation, but the new cultivar 'Snow Kitten' would have been impossible to miss as well. Considering the name, it's not one that I would ever choose, but the rules are: if you discover it, you can name it whatever you want. 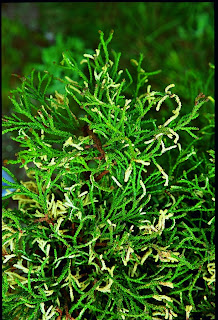 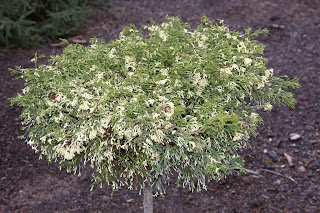 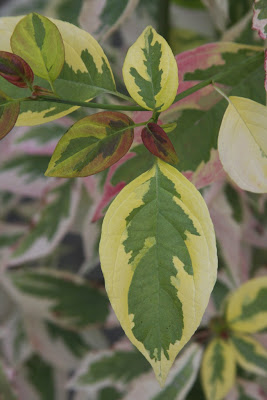 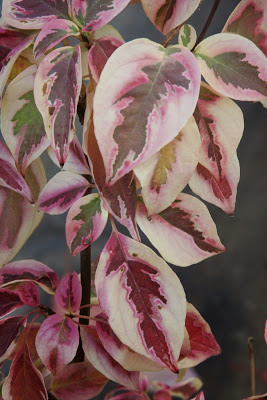 
I also gave Japanese names for two plants that were discovered at the nursery. Cornus alternifolia 'Saya' was named for my youngest daughter, and the name translates as "field of flowers." She is the sweetest, happiest child on earth, delighting all who meet her, and the same is true for the dogwood. Chamaecyparis obtusa 'Harumi' was found as a branch mutation on 'Torulosa Dwarf', and the name means "spring beauty." I was very single at the time, and certain that I would never again marry, ever, but dear Haruko changed that. But when I was single, I encountered the name in literature, and thought to myself that it would make a nice name for a daughter, but obviously for someone else, since I would have no more children. But then Haruko showed up in my life and was willing to marry this old geezer, and next thing we were blessed with a beautiful daughter; so Harumi she became.

Our Buchholz Nursery work force comes from far afield, from Japan, England, Mexico, Guatemala as well as from the United States. And with so many species and cultivars with Japanese names, it's amazing that all of the employees can pronounce them perfectly. Of course, those who couldn't were effectively dismissed.
Posted by Talon Buchholz at 4:06 PM